Remembering, and looking ahead: an Illinois underground railroad stop reminisces for Juneteenth

As America celebrates its first official Juneteenth, an old house in rural Illinois remembers and carries on a tragic, triumphant legacy. 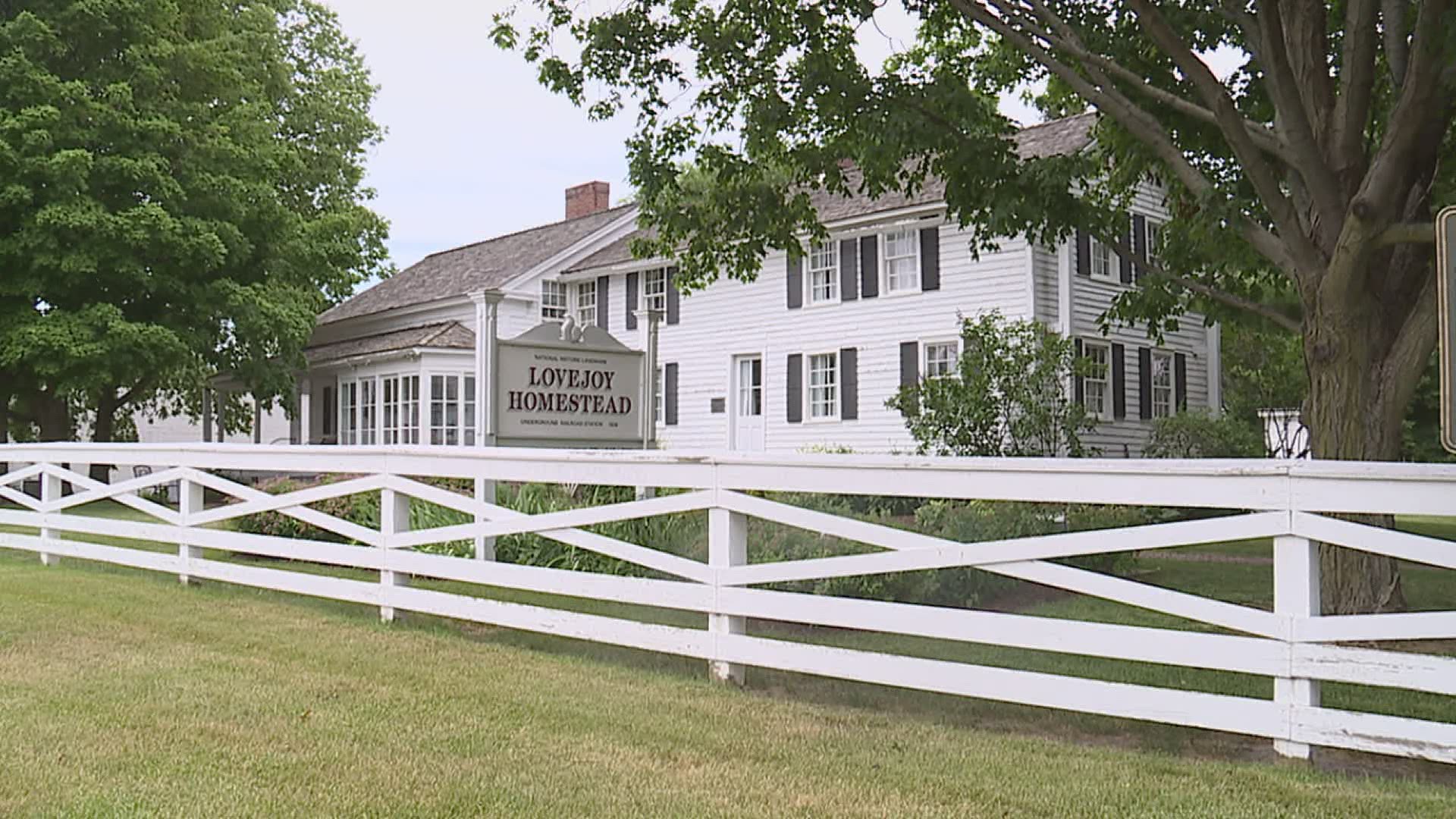 PRINCETON, Ill. — On a quiet road in Princeton, Illinois, a white house sits on a manicured lawn. Signs and plaques hang all around the front lawn and near the main entrance, proclaiming it a national historic landmark. For over 200 years, the Owen Lovejoy Homestead has stood frozen in time - forever tied to the history of Black Americans, and the freedom they had to run, fight and die for.

"He took upon the cause of being what we call a true abolitionist. He was a person who didn't believe in slavery, but he wanted everybody to be treated equally," said Lois Peterson, a guide at the home, which now serves as a historical marker and museum. "He preached from the pulpit when he got here to Princeton and made a lot of people angry. Then he decides to get into politics in 1854."

Lovejoy took after his brother, Elijah Parish Lovejoy, who was killed by an angry mob in Alton, Illinois, for his abolitionist views. After that, Owen became infamous for his outspoken and bold proclamations, often declaring that he would help harbor and assist any runaway slaves that came to his house.

The house itself has several hiding places that researchers estimate helped hide enslaved people, including one small rectangular hole in the wall above the staircase. They would arrive in the early hours of the morning, and get some rest and some food at the house. From there, they'd continue traveling north as soon as it got dark - either following directions given to them by the Lovejoys, or taken there by the Reverend himself.

"To travel the way they did... I have no idea how they did it," remarked Peterson.

The property is on the "Quincy" line of the underground railroad, helping men and women traveling up from Quincy, Illinois, over to Chicago and then north over to Canada.

Today, the homestead hosts tours and is regularly restored. It's now owned by the City of Princeton. To Peterson, keeping the legacy of the house alive is just a continuation of history.

"It's in very good shape. And it is so original to the time period in 1850s, 1840s when Reverend Lovejoy was here," she said. When asked about the pressure to uphold such an old, historic piece of America's past, she called it a joy. "All of us - the board of trustees and the guides - that it's a joy to have the home open and to show it to people."

For historian David Connon, having such a building preserved down to the original flooring is remarkable - not only from a scientific point of view, but for all the people who pass through it.

"There's something very powerful about having the buildings there," he said. "If there are physical buildings available and artifacts available, it's much easier for people to think about and remember. To use their imaginations for things that they can see and touch and step into."

Connon spent nearly two decades of his life researching Iowa's underground railroad and the men and women that either split into abolitionist beliefs, or left to go fight for the confederacy in the civil war. He recalled when he visited a similar homestead, at a church in Burlington, Iowa, and walked down into a tunnel where runaway slaves hid during the day.

"It's so fascinating and such a powerful story," he said. "And the Reverend William Salter, who helped them out there was brave - a man of courage, a man of principle, a man of love who put himself on the line to help other human beings find freedom."

Connon says anyone who was caught harboring enslaved people could be punished by up to six months in jail and a fine up to $1,000. In that time, that fee was equivalent to about three years of salaries.

To him, having the house remain as it stands is a marker for Americans, to never forget such a dark and tragic time in the country's past.

But now Americans have another, more celebratory marker as well. President Joe Biden officially declared Juneteenth the latest federal holiday, occurring every June 19th. It's the day a group of slaves in Texas were officially freed, two years after the Emancipation Proclamation.

"I think it was very important for it become a federal holiday. Otherwise, we had, we wouldn't have been fighting for it. For decades now," said Ryan Saddler of Friends of MLK Davenport. "Are we satisfied? No, we are not. We're not satisfied with what we see happening in America when the education of our history is being threatened in our school system; we still have issues with our with our criminal justice system; and economic opportunities for Black People and People of Color. So we're not satisfied with with our societal ways, but, again, this is a holiday that we need to celebrate."

Saddler says instead of looking at the day as a day off of work, to instead view it as a day on - to fight for, celebrate, and uplift America's vibrant and innovative Black communities.

"We can we can put some some emphasis on the beauty, the victories, and the perseverance of Black America and our collective contribution to society as we know it. And that's what it is, being a federal holiday, is giving us that opportunity," he said. "Because now whether someone wants the day off or not, they get it off. And it's Juneteenth. So now America will forever be reminded of Juneteenth and that keeps the story alive."

Keeping the story alive, remembering the past, and moving forward: all hallmarks of Juneteenth celebrations across the country.

And also the purpose of a 200-year-old white house in Princeton, Illinois, who's waited nearly two centuries for its first official Juneteenth, and carries the legacy of all the Black Americans who couldn't make it to 2021.

RELATED: Here's a list of events celebrating Juneteenth in the Quad Cities

Posted by The Homestead Festival, Princeton, IL on Monday, June 14, 2021