The phenomenon caused extensive damage in the Quad Cities Monday as hurricane-force winds tore through. 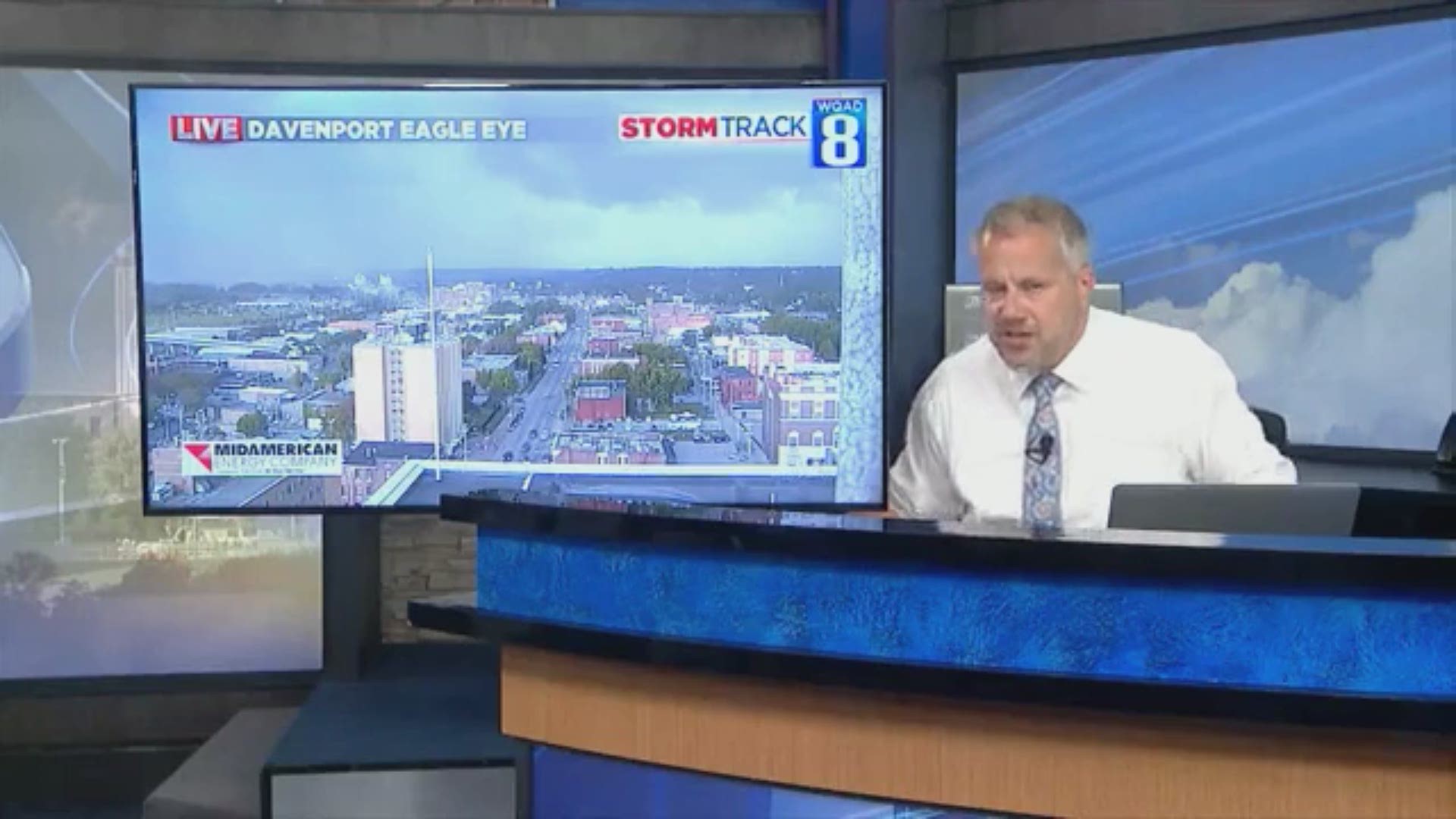 Winds in excess of 90 MPH, extensive damage, and a power outage that will last for days; all signs that you've just experienced a derecho. Just how common is this type of weather phenomenon? More common than most think!

Derechos are very common in the summer months of June through August in much of the Midwest. On average, the Quad Cities region sees at least one each year. In fact, there was one year in which we saw three separate derecho events back-to-back in 2013.

In order for a complex of severe thunderstorms to be classified as a derecho, they must meet two standards. These storms must continuously produce wind gusts in excess of 58 MPH and travel a distance of at least 240 miles producing damage throughout the path. Monday's event easily met the criteria, traveling a total of 770 miles from South Dakota to parts of Ohio in a span of 14 hours.

Circled/highlighted swaths of crop damage from the TERRA satellite pass earlier today of the derecho yesterday.

Over time will become more easily visible as crops wilt/die. Also likely to see extent widen as crops on the fringes may give in to damage they sustained. #iawx pic.twitter.com/2fYgVYhEm6

Known for their long history of damaging winds, a derecho forms with a unique weather pattern that involves a whole lot of heat and humidity creating very high levels of storm energy. These conditions were present Monday afternoon as the storms quickly raced southeast, originating in South Dakota earlier that morning.  These storm complexes are also extremely difficult to forecast days in advance despite continuing advancements in forecasting technology.

A special weather balloon was launched at noon on Monday before the line of severe storms reached the Quad Cities. It revealed an extremely unstable atmosphere with levels of CAPE (Convective Available Potential Energy, known as storm energy) well in the 4000s. This energy combined with stronger winds aloft behind the system would go on to produce widespread reports of winds pushing 90 MPH at times.

Looking at climatology, we typically see one derecho event each year here in the QC. The most recent one in my memory was June 28-29, 2018. #WeTrackStorms pic.twitter.com/AltLD4PHtS

There are two types of Derechos, serial and progressive. Serial Derechos are typically in the form of a squall line that is hundreds of miles in length, while progressive Derechos are associated with shorter lines of thunderstorms. 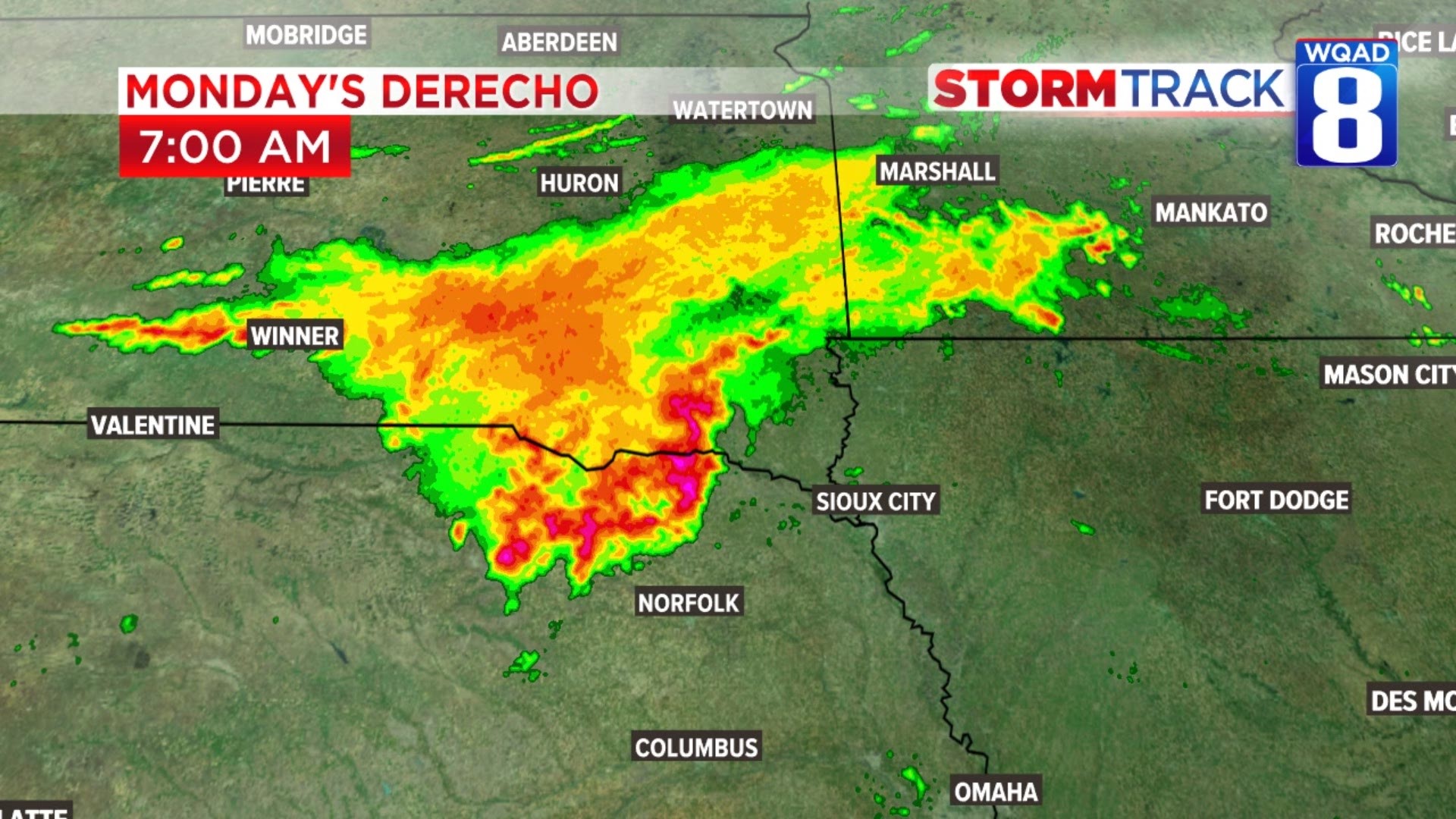 News 8 Viewer John K asks if climate change is having an impact on the strength and frequency of these unique storm systems.

According to the Storm Prediction Center, climate change isn't currently playing an active role in the strength or frequency of these storm systems.

"A warmer planet at first glance would appear to be more conducive to the development of the intense thunderstorms that comprise derecho-producing convective systems. But thunderstorm updrafts require the presence of strong vertical temperature gradients; any warming that occurs at the surface likely also would occur aloft." Scientists at the SPC go on to say, "There is nothing to suggest that a warmer world necessarily would favor stronger Derechos. This is not only because vertical temperature differences likely would remain unchanged but also because derecho development requires the favorable coexistence of many interacting environmental factors over various scales of time and space."

One fairly certain consequence that will come from climate change when it comes to Derechos is the migration to the north of these "high frequency" areas.

1 / 11
Angie Frank
A photo of 8-year-old Easton checking his sheep at a family farm in Hooppole, Illinois before a severe storm swept through the Midwest just before 3 p.m. on Aug. 10, 2020.