In Savanna, deer hunting began a week early, for a few hunters living with disabilities

The annual hunt allows those in wheelchairs, or with other disabilities, to get out and firearm hunt for deer a week before the season opens up for the rest of IL. 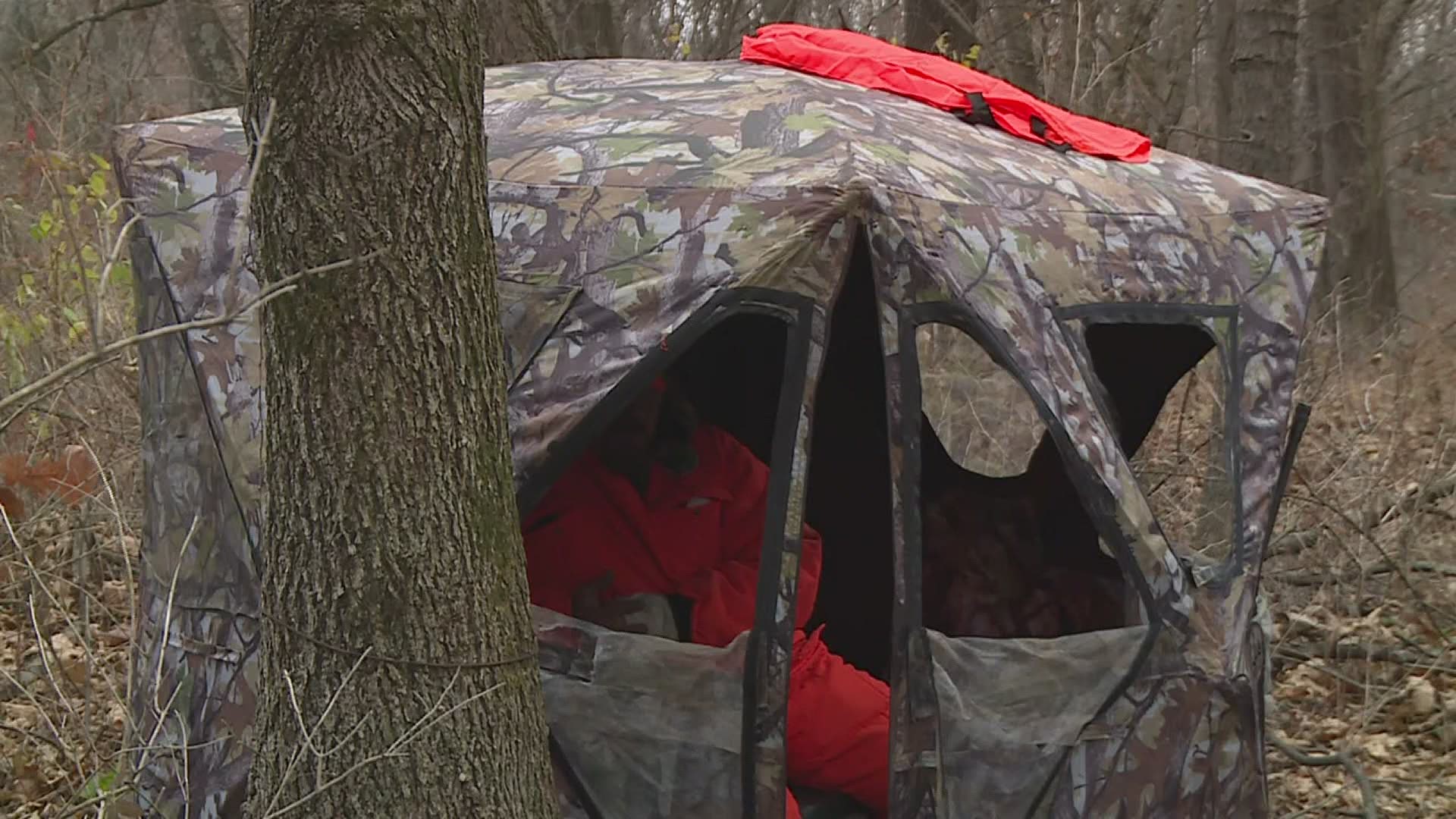 SAVANNA, Ill. — Nearly 35 hunters, along with their attendees, spent the weekend of Nov. 14-15 at the old army depot in Savanna, for a special hunt for those living with disabilities.

For the rest of Illinois, firearm season for deer hunting won't open up until Nov. 20. But this hunt was given special permission to take place early, and allow those who might be gatekept out of many other hunting grounds, the chance to try and nab a deer.

The annual disabled hunt has been taking place at the depot since 2007, and has grown from just 15 open spots, to 35. According to Ed Britton, District Manager for the Upper Mississippi River National Wildlife & Fish Refuge, the high quality of both the hunt, and the care the staff put into making the event accessible, has contributed to its growing popularity.

"Many of these guys are in wheelchairs, so these sites have to be accessible," he said. "So we go to a lot of extra effort to make that happen."

This year, hunters from nine different states made it through the application process, including some from Mississippi, Alabama, Tennessee and Florida. And in the past, as many as 14 states have been represented. Britton said the idea of the hunt began when he was chatting to a few disabled veterans about what different opportunities the refuge could offer.

"We have quadriplegics, paraplegics, amputees, [and] disabled veterans that come out," he said. "They really live great lives on their own, but they depend on opportunities like this to have fun."

This is one of only three annual hunts allowed on the grounds of the old military weapons base. Staff for the Upper Mississippi River National Wildlife & Fish Refuge say it's the perfect location. Hundreds of concrete bunkers soar up out of the prairie, allowing for little tree coverage and plenty of visibility. Old roads, packed down from decades of military vehicles rumbling across, allow for easy wheelchair access. And designated spots for each hunter to set up a blind allows for maximum safety.

"Having areas like that, that are designated, makes it easier," said Mike Schmitz, one of the weekend's hunters. "We, as a disabled community, have a lot of confinements - places we might not be able to get into, or things that we wanna do, that we're not able to. I'm not able to park at the trailhead and hike two miles into the woods and set up a deer blind." He says the lengths the staff go to, to provide care and accessibility to the hunters, is part of what makes this particular hunt so special. "It takes the pressure off of us," he said. "And beside that... let's face it: there are some monster deer out here."

Schmitz hunts from his wheelchair, after a car accident in high school left him paralyzed from the waist down at age 18. After recovering, and graduating, he eventually became a peer instructor, helping others with disabilities.

"I learned that I had a lot more independence, and it's really just a matter of not letting what you can't do, get in the way of what you can," he said.

RELATED: A local three year old was diagnosed with Leukemia - now, his family is giving back

Schmitz says when he first woke up in the hospital, he was plagued with questions of what he would be able to do. That, he says, is one of the biggest misconceptions able-bodied people have for so many differently-abled individuals.

"And I don't mean that to be insulting," he assured. "The biggest thing about it, is don't get stuck in a mindset. If you meet somebody with a disability, one of the best things in the world is to ask questions. It's just a matter of listening with an open mind; taking a little bit of time to see what you can do to help somebody, which can in turn help others."

And over the years, Schmitz says hunting has been one of his favorite activities, and this annual event, one of his most treasured getaways. He even cut and built a custom gun rack that attaches to his chair, to allow him to mount his gun and maintain his balance, even while it's holding his weight.

"Anybody can go to the grocery store, and it's a whole lot cheaper to just buy some meat there," he laughed. "But it's about the challenge and being outside and enjoying God's creation. You put all your troubles aside."

Now, he's been attending the depot's annual hunt every year for nearly a decade. Along the way, he says it's brought him a circle of friends that have become family - even if he only gets to see them once or twice a year. That alone, he said, would make the ten and a half hour drive up from his home in Lebanon, Tennessee, worth it, even if the staff and hunt quality wasn't also great.

RELATED: King's Harvest Pet Rescue encourages families to open up their homes to a cat, kitten

"The biggest deer I've ever seen alive has been here," said Schmitz. He admitted that he might have missed the big one on previous hunts, but laughed off our attempts to assure him we wouldn't tell that part of the story if he didn't want it known.

He was referring to the shot he had taken just before News 8 arrived at his hunting site to chat. Earlier in the day, he'd already gotten two does, but now, he was sure he'd managed to kill the largest buck of his life.

While we talked, a team of refuge staff, Schmitz's own attendee, Forest, and a special team of four-legged deer trackers went out to see if the wounded animal had gone down anywhere in the area.

"We put the dogs at the beginning, where the shot was taken, so they can put the track out," said Seth Nelson, owner of the Rock Falls-based, Down Deer Recovery. The dogs he's referring to are three-year-olds Kimber (a female bloodhound) and Maverick (a male German Shepard).

Credit: Shelby Kluver
Kimber, of Down Deer Recovery, poses for the camera after scoring her first deer (and congratulatory hotdog) of the weekend.

The duo are trained to ignore blood trails wounded animals might leave on the path, and instead follow the pheromone scent an injured deer releases from its hooves. Where it might take a hunter an hour to scour for a deer they had shot, Nelson says his dogs can track the animal in five to ten minutes. For hunters with disabilities, he says that's especially valuable.

"[The hunters] don't have to get down and track themselves," he pointed out. "We can get out, put the dog on it, and make a fast, speedy recovery."

And when they do find a downed deer, he says each dog gets showered in their preferred reward. For Kimber: uncooked hotdogs. For Maverick: plenty of praise and words of affirmation.

For Schmitz's deer, it was Maverick who found the buck laying in the prairie. The team rushed back to the hunting blind where we were talking with Schmitz, to relay the good news: it was, indeed, a monster buck.

"Oh my God! Oh, I'm in love," yelled Schmitz, nearly in tears at what this particular buck meant to him, after all the personal loss he sustained this year. And to do it at the army depot, on that hunt, meant even more.

"People out here at the refuge remove barriers and do anything they can so we can have a great time," he said. "I know it takes a ton of work, but they have listened to anything and everything that we've brought up. This hunt gets better every year, and it's all because they listen and genuinely want to help."

He mentioned that if could only go on one hunt all year - as was the case for 2020, due to Covid-19 - he  would always try to come up to Savanna.

When all was said and done, and all the pictures were taken, he could confirm: the buck he shot at this year's hunt was the largest he'd ever gotten.