A local three year old was diagnosed with Leukemia - now, his family is giving back

After undergoing months of life-saving blood transfusions, Hudson McKearney is in remission. And his family is spreading the word: they want you to donate blood. 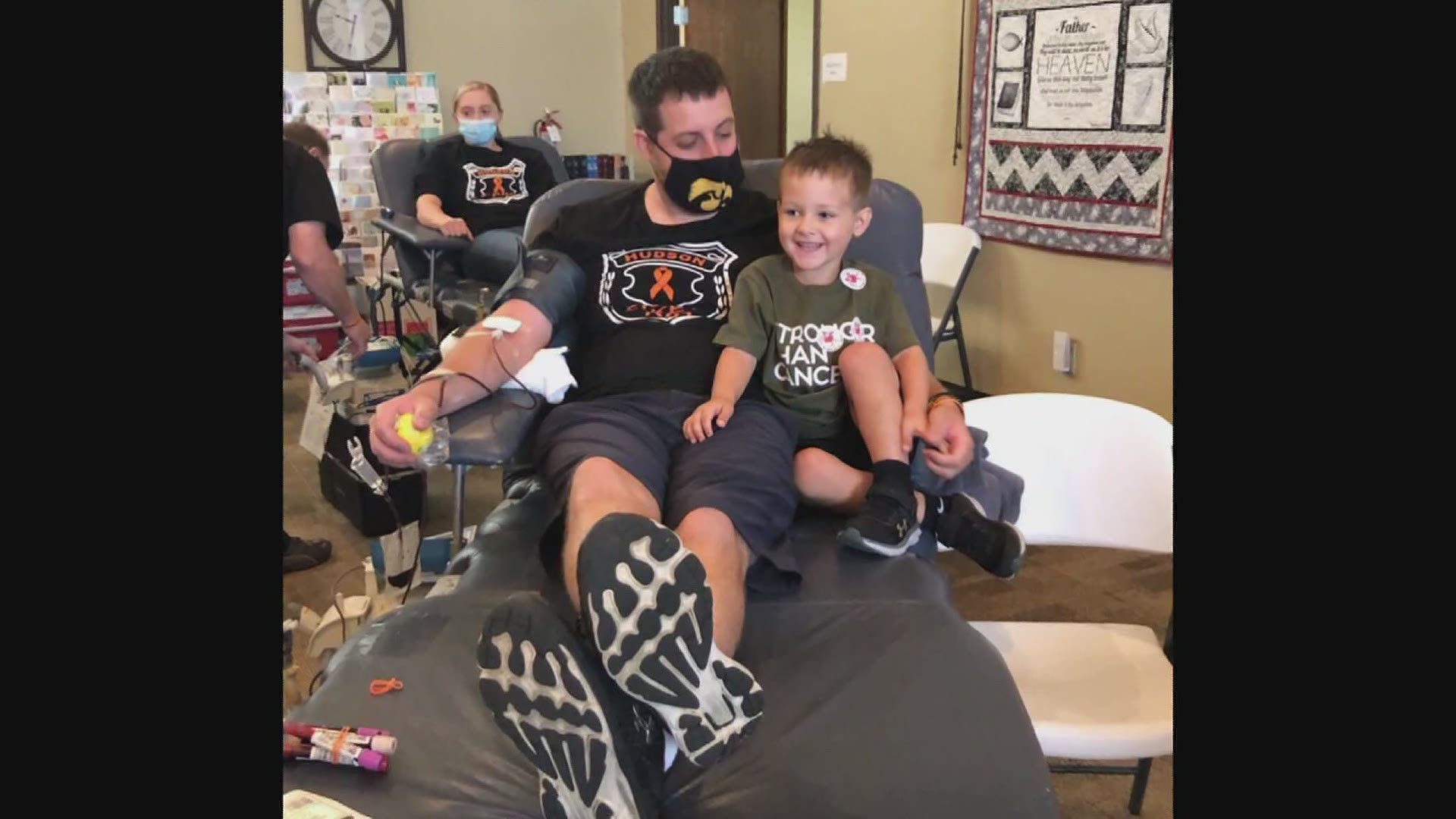 ELDRIDGE, Iowa — Family, friends and community members came out this afternoon to donate blood in support of three-year-old Hudson McKearney. Dubbed 'Hudson's Heroes,' the group isn't giving the blood to him... but instead, giving back after all of the life-saving transfusions he's received since his cancer diagnosis last year.

More than 50 people showed up to donate, giving enough blood to save 150 lives. Kyle and Jessica McKearney, Hudson's parents and the hosts of today's drive, say the support was nonstop all day long.

"We had all 50 appointments booked," said Jessica. "And then this morning when one opened up, someone filled it within 10 minutes."

"People that didn't have a slot were still showing up, asking to donate," added Kyle.

It was the first blood drive the two have hosted, but they've been around plenty of donations over the past year.

"What made us become so passionate is our son," said Jessica.

Credit: Jessica McKearney
Kyle and Hudson in the hospital

In March, 2019, Hudson was diagnosed with Acute Lymphoblastic Leukemia (ALL), just before his second birthday. Within the first night of finding out, Kyle said Hudson already needed three bags of blood and two bags of platelets for stabilization.

"Without blood donors, and blood drives and all of these donations, our son likely wouldn't be alive," said Jessica. "People think blood donations mainly go to traumas, but a lot of it goes to cancer patients."

Now, after more than 15 life-saving transfusions, Hudson is in remission, but will still need chemotherapy and treatments until May of 2022.

Even though cancer is the leading cause of death by disease among children, the National Pediatric Cancer Foundation reports that only 4% of government-funded cancer research goes to childhood cancer.

"That's another reason we held this drive," said the McKearneys. September is Childhood Cancer Awareness Month, and they wanted to help spread the word.

And all of 'Hudson's Heroes' that showed up this afternoon seem to agree.

Credit: Jessica McKearney
Hudson now, finally able to do "toddler activities," thanks, in part, to all of his life-saving blood transfusions

Scott Country Sheriff's Deputy Jonathon Johnson is one of Hudson's best friends, and has spent plenty of time with the toddler since his diagnosis.

"He's one of the toughest kids I know," said Deputy Johnson.

He gave blood for the first time today, inspired by Hudson's ability to keep pushing forward, no matter what stands in his way.

"He just has positive energy and he just has a great spirit," he said.

And Jessica Grant, an ICU Nurse who helped reveal Hudson's sex while Jessica McKearney was still pregenant with him, pointed out that it doesn't take much time to donate.

"It literally took less than 7 minutes just for me to donate and my one donation's gonna save 3 lives," she said. "If we could just get more and more donations, we wouldn't have a shortage. We're at such a bad shortage."

"Drives like this are just so important to bringing awareness for the need for blood products. And I think a lot of times, people don't even realize how hospitals get blood," said Angela Reese, Donor Relations Consultant for the Mississippi Valley Regional Blood Center. "Most of us don't wake up and know that we might need a blood transfusion that day or when that is gonna happen so it's so important to have regular blood drives."

She added that the center has taken multiple safety precautions, and can meet the needs of different businesses and organizations that might be interested in hosting.

"Every blood donor is such a hero in our eyes because it is life or death for some people," said Jessica. "It just, it truly saves lives. So we've seen the true impact of blood donation, and it just will forever, you know, be a huge part of our life. And we just can't thank blood donors enough."

Here’s your good news for the day: Hudson is in remission and thriving! We’re grateful to be a part of Hudson’s story,...

Today's event also functioned as a toy drive for University of Iowa's Stead Family Children's Hospital. Kyle explained that it was easy to figure out a child will forgive quicker if there's a toy to cheer them up. The McKearneys laughingly admitted that Hudson has gotten plenty of goodies - including his favorites, police cars and HotWheels - for all of the IV needles, blood transfusions, and pills he's had to take over the last year and a half.

"And he's deserved every one!" said Jessica.

RELATED: Stress from the pandemic may take a toll on your teeth

"A two year old that has to take multiple pills per day... we went through a lot of toys," said Kyle. "So if we can give back and make things easier for the next family, that's amazing."

As for Hudson, out of health concerns, he wasn't able to stay at the blood drive for very long. But his dad says he was there long enough for a sweet role reversal.

"We switched spots; he got to hold my hand this morning while I got blood drawn," laughed Kyle.

The McKearneys say they hope today's drive becomes an annual event, but encourage people not to wait until next year.

"Even if you can't come today, your donation is just as important if you donate tomorrow or next week," said Jessica. "It's a pretty easy thing to do and it has a huge impact on someone's life."

If you'd like to get involved, you can read more about Hudson's story, and updated journal entries from Jessica, on his Caring Bridge page.

Those interested in hosting a mobile blood drive in the Quad Cities area can contact the Mississippi Valley Regional Blood Center here. And if you'd like to sign up for donations at their center, you can do so here.