Hampton police claim the camera turned off multiple times because the officer's AR-15 gun sling made contact with the on/off switch. 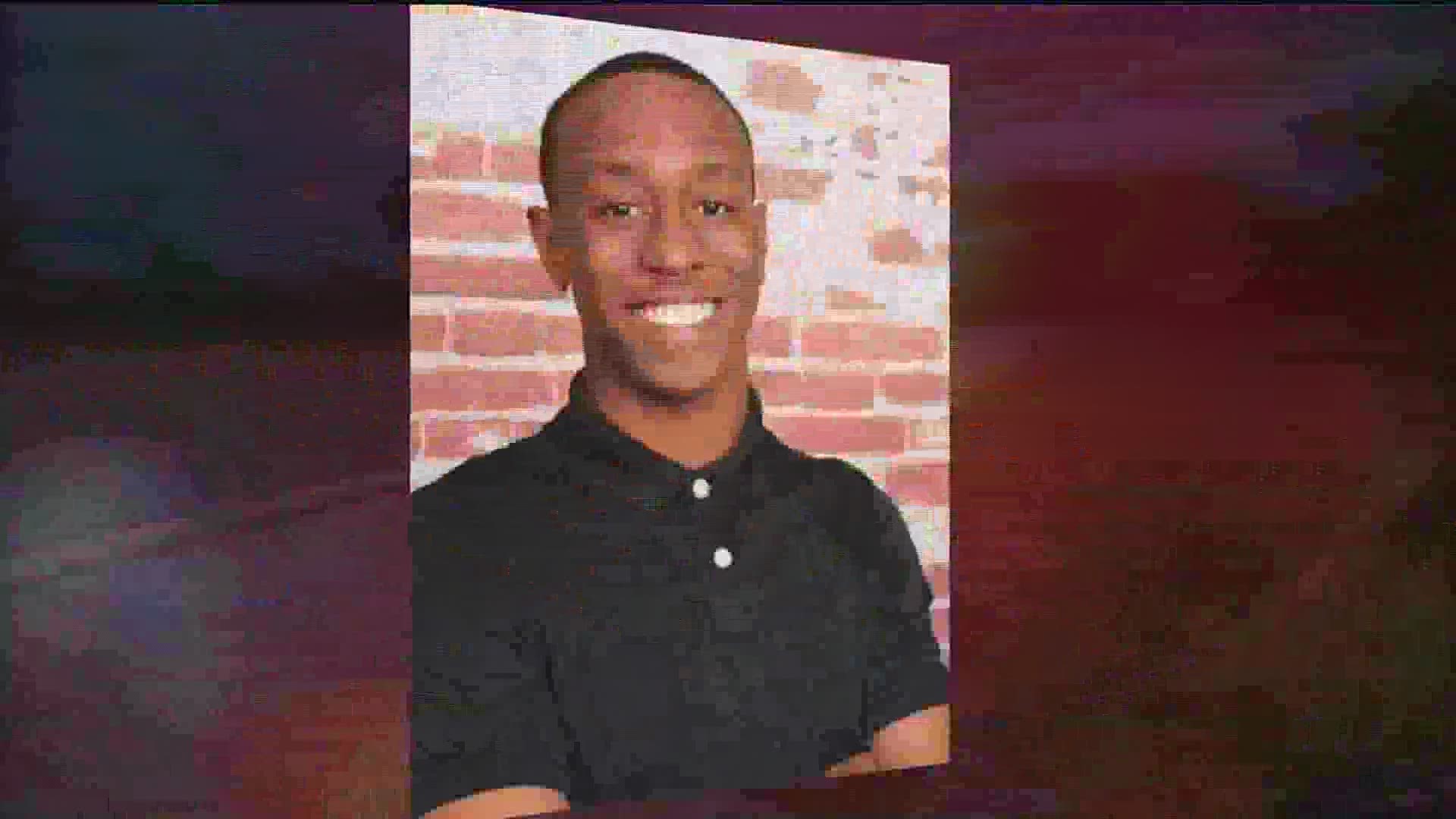 A sizable time period is missing from newly released body camera footage of the night a Black, Illinois college athlete was threatened and mistaken for a suspect.

WQAD received the body camera footage of former Hampton Police Officer Ethan Bush, one of six officers named in an American Civil Liberties Union (ACLU) lawsuit that says Eastern Illinois University (EIU) swimmer Jaylan Butler, the only Black member of the team, was handcuffed face-down in the snow the night of Feb. 24, 2019.

The 50 minutes in between are missing.

Officers, who had the wrong person, threatened Butler with a gun to his head, according to the lawsuit. One of the officers told Butler "If you keep moving I'm going to shoot your f***ng head off," the lawsuit said.

The ACLU is suing for unlawful search and seizure, false arrest and excessive force among other complaints. All officers involved in the incident deny any wrongdoing. 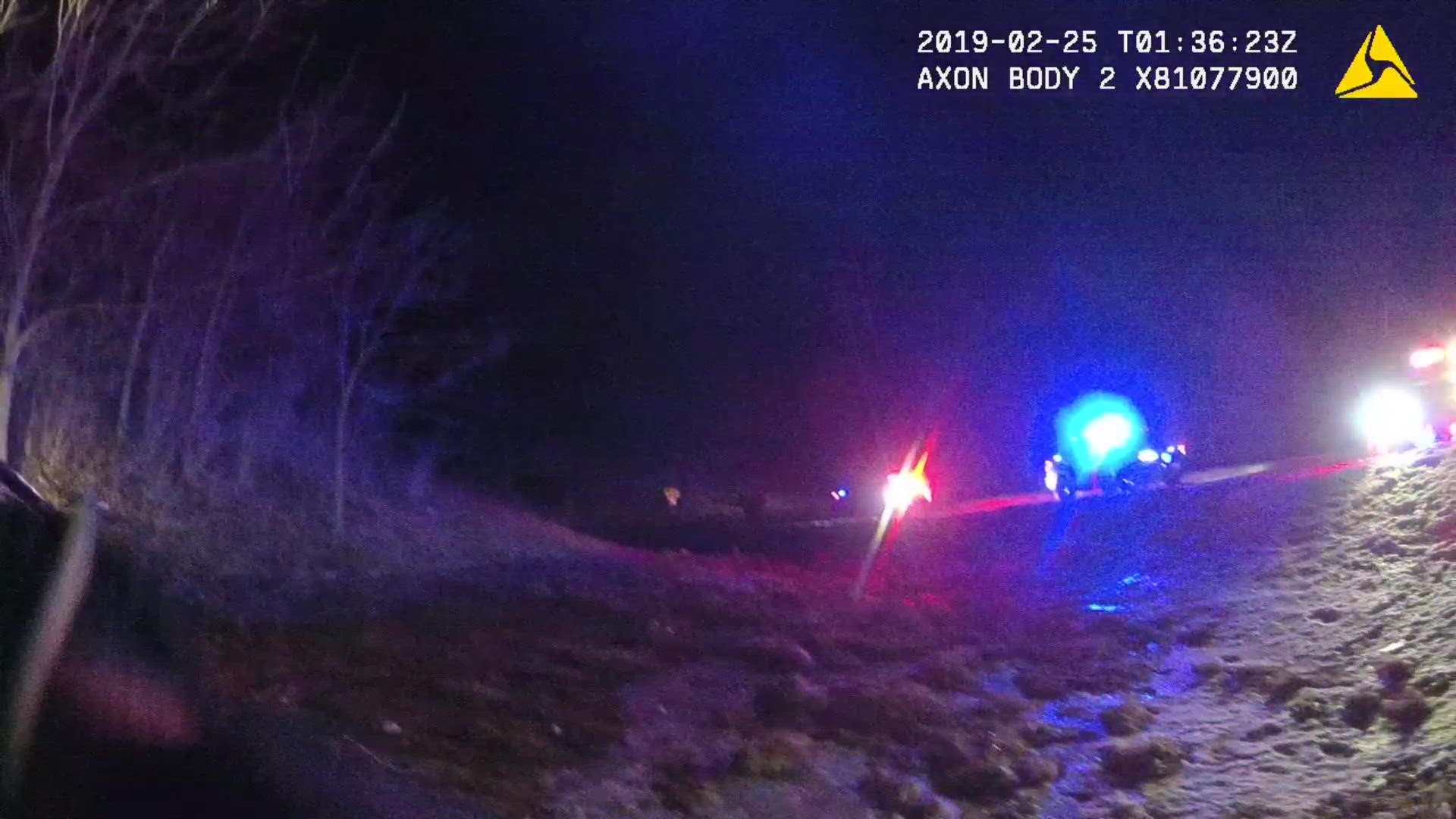 Bush's body camera shows the car of the Black man police were looking for.

That car was crashed off of Interstate 80 near Exit 1 toward Rapids City/Hampton.

The video shows officers and K-9's looking around the area. Hampton Police Department reports say officers intended to search for the suspect but because the suspect could have higher ground, they deemed the search unsafe and called it off for that area.

Exactly 22 minutes after the video starts, it stops while Bush is standing still at 8:58 p.m.

During the unaccounted for body camera video, Hampton police reports say that Bush was sent to a nearby rest stop overlook to search for the suspect because of a 9-1-1 call of an unidentified man running across the interstate near the area.

It's at that rest stop where EIU's swim team was parked in a charter bus, taking a break on their trip home from a swim meet.

Butler was standing outside, around 50-feet away from the illuminated bus, the police report said.

Police, with drawn weapons, ordered Butler to get on the ground or he would be shot. The report says Butler puts his hands in the air, drops his cell phone from his right hand and kneels on the ground.

Butler was put in handcuffs then released after officers realized he was not their suspect, according to the report.

His teammates were sitting in the bus at the time watching the incident unfold. Butler says the team's bus driver repeatedly told police they had the wrong person.

Butler said officers kneeled on his neck and back pinning him face-down with a gun to his forehead. Officers threatened to kill him, Butler said.

It's this part of the night that was apparently never recorded. 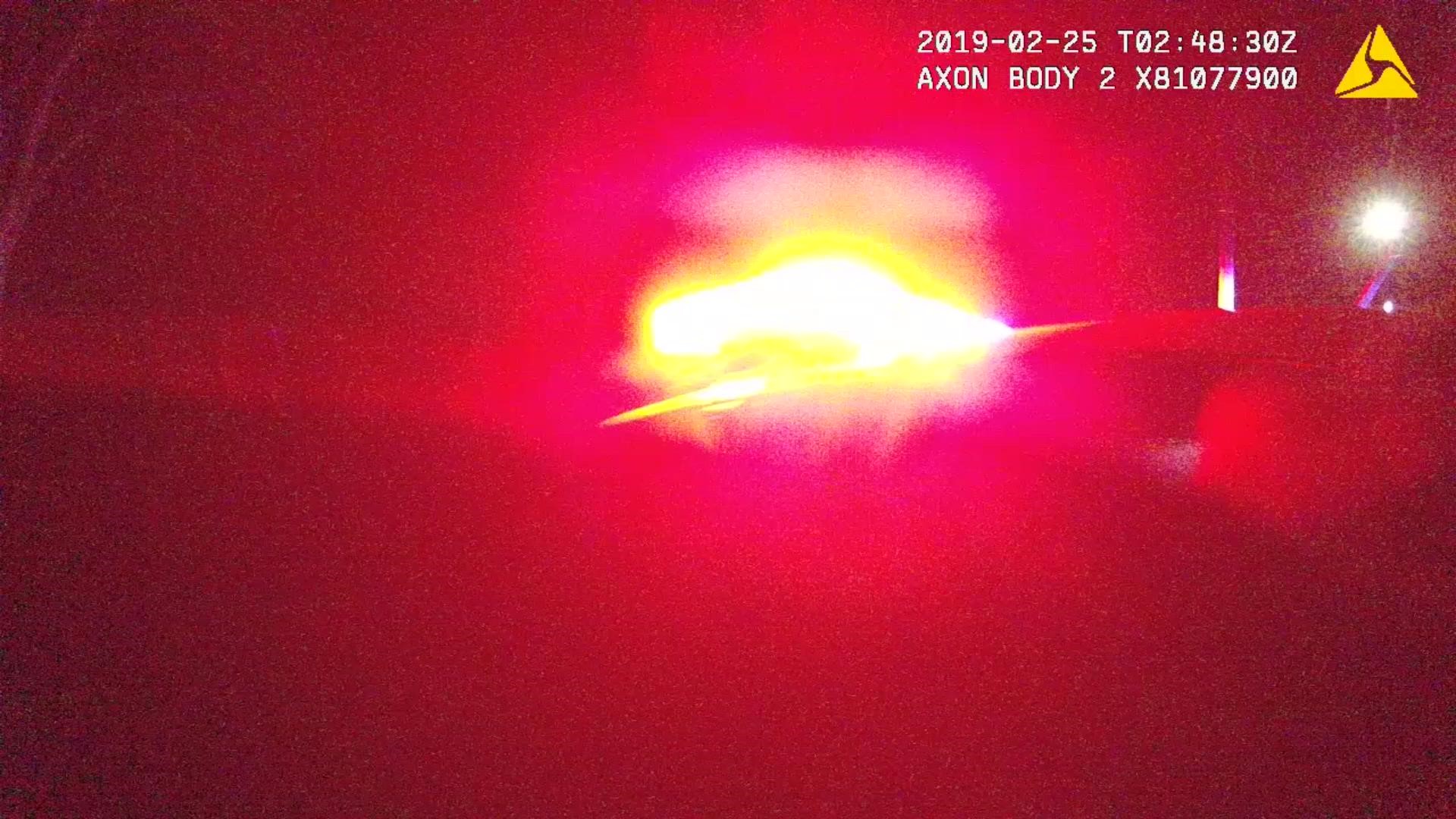 Fifty minutes later footage from Bush's body camera starts back up again showing 26 minutes and 32 seconds of the former officer going door-to-door, business-to-business, asking people if they have seen the suspect they were looking for.

Civil rights attorney Dave O'Brien is not involved in the case but says body camera video is crucial.

Hampton police said Bush's gun strap is to blame for the camera shutting off more than once.

"It should be noted, most of the incident was captured on BWC 7900," the report said. "On multiple instances the BWC was turned off due to equipment, including the AR-15 sling, making contact with the on/off switch."

News 8 requested the footage that was recorded during those 50 minutes under the Freedom of Information Act.

Hampton police said, "A FOIA requires the production of documents, not explanations. We have provided you all the video we have on this incident per the previous FOIA request. Therefore, this FOIA request is considered complete and the rest to be improper. You may consult our attorney for explanation."

O'Brien, who has been practicing law for more than 35 years, said he doesn't believe the explanation given and that the missing video is more than a hole in the case.

"It sounds extremely implausible," O'Brien said. "If they're destroying evidence, that's a crime."

When O'Brien was asked if he thinks Hampton police destroyed evidence, he said, "Their explanation doesn't hold water, so my answer to your question is yes."

News 8 reached out to Axon, the company that makes the brand of body camera Bush was wearing the night Butler was threatened.

A statement from Axon said the company was unaware of their body cameras turning off due to other equipment making contact with the on/off switch.

"To our knowledge, this is not an issue that police departments regularly experience and we do not have metrics that track this data," the statement said. "The way in which our body-worn cameras are built allow them to be worn alongside other tactical equipment such as radios without issue. The on/off button resides in the center of the device and is concave to eliminate the risk of it being accidentally tapped."

The statement noted that agencies can personalize how the camera is turned on such as double tapping the center button of the camera to begin a recording. Axon cameras also have a default 30-second "pre-event buffer feature" that allows for recorded video before the camera is actually turned on.

"We also have Axon Signal technology which triggers hands-free camera activation when certain actions occur including police car light bar activation, a TASER CEW or firearm being withdrawn from the holster, a police car door opening, a gun shot being detected, etc.," the statement said.

"If you didn't do anything wrong you want that video," O'Brien said. "There's no reason for them to try and hide this other than it shows a lot of stuff they did that they don't want people to see."

Bush wasn't the only officer on-scene

Travis Staes from the East Moline Police Department, and Jack Asquini and Jason Pena from the Rock Island County Sheriff's Department are also named in the ACLU lawsuit.

At that time in 2019, East Moline and Rock Island County did not have body cameras. The Rock Island County Sheriff's Department did release dash camera video at the scene but it's too dark and far away to see interactions with Butler.

According to Illinois statute, body cameras must be turned on "at all times when an officer is in uniform and is responding to calls for service or engaged in any law enforcement-related encounter or activity."

The ACLU lawsuit is currently in the discovery phase meaning evidence is being collected. Butler's lawyer with the ACLU said the trial has been pushed back because of the coronavirus pandemic but a new date has not yet been set for trial.