One thousand doses were available on Tuesday morning to healthcare workers outside of hospital systems. 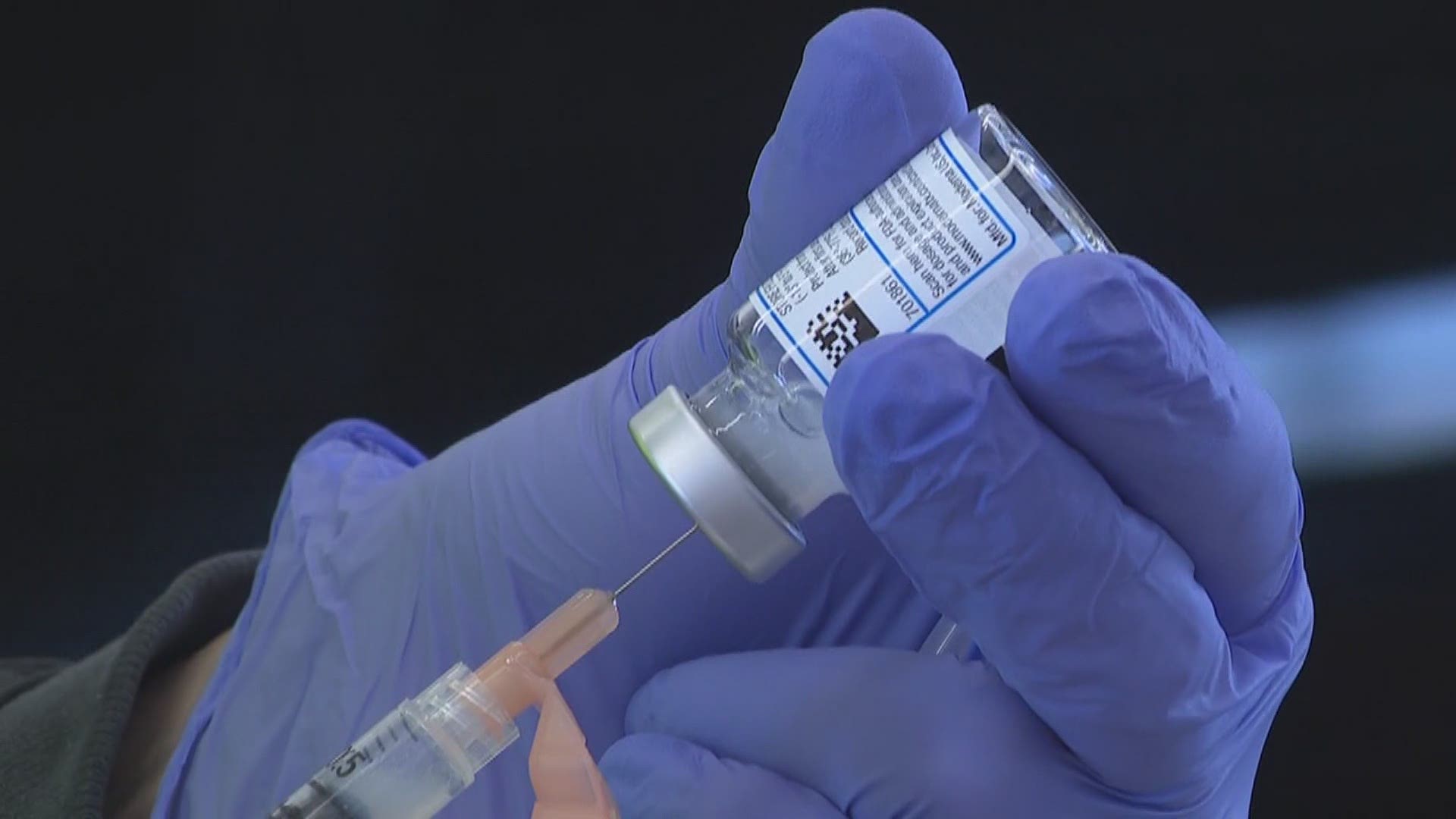 MILAN, Ill. — In the latest step in the battle against this pandemic, a drive-through vaccination clinic has opened in Rock Island County at the Greater Quad City Auto Auction in Milan. It's the first mass vaccination center in the county and it plans to run from 9am to 1pm nearly every Tuesday until vaccinations are no longer necessary.

The first group to receive the shots from the new clinic were healthcare workers outside of hospital systems, including school nurses, morticians, dentists, chiropractors, and more.

On Tuesday, Jan. 12, the first day of operation, the clinic had 1,030 Moderna vaccine doses to give out, and ran from 9am to 2:30pm. Each person who was given the shot will have to return in 28 days for their second dose. Cars began lining up before 7am, and the line stretched through the parking lot and down the street.

Janet Hill, the Chief Operating Officer for the Rock Island County Health Department called the event a 'momentous occasion' for the county.

"It's a light at the end of the tunnel for us. I mean, we've been suffering through this pandemic for more than 10 months," she said. "There hasn't been an action step for people to take. It's been all defensive - wear your mask, watch your distance, wash your hands. This is an offensive move that people can take and it's just really exciting."

Healthcare workers that work in the county could attend. After driving into the parking lot, they had their temperature and vitals checked by nurses. They also needed to provide an ID badge or a letter from their employer to prove they were a healthcare worker. Then, if they received a clean bill of health, they were allowed to drive up to nurses tables and get the dose. A brief waiting period of 15 minutes was required, to make sure no allergic reactions happened, and then they were free to drive away.

Once this phase is complete, the clinic will be open to those in category 1b, which includes those 65 years old or older and frontline essential workers. As Hill described, those are people who weren't given the option to work from home, and had to go into the office, grocery store, manufacturing plant, farm, etc., to maintain their job.

"It really is exciting to see that so many people are here to take their health proactively and to get the shot," remarked Hill.

While she admitted that there were going to be some slow learning curves at first - as this is the first vaccination clinic of this scale to ever take place in the county - she was confident that her team would quickly find a groove.

"Public health is doing the best they can and we want people to get the shot as quickly as possible." While the clinic is open, about 25-30% of the Rock Island County Health Department's team will be running the site. Hill took a moment to praise all of the hard work they have continued to put in, since the pandemic began, saying, "The same work force has been working tirelessly since last January. It has been a long, long time. The Rock Island County Health Department staff has just been working non-stop for months."

And after so many of those long months, the feeling around the vaccination center was, in a word, relieved.

Leon Gibson, a local mortician, was the first person to receive his vaccination when the center opened on the 12th. He said the shot itself wasn't a problem at all, and he didn't feel any pain whatsoever.

"It is definitely a sense of relief. I can't imagine anybody that would say, 'hey, they shouldn't take it,' because it is a good, safe vaccine," said Gibson.

He also remarked that with his occupation, it's exciting to get the vaccine early, to stay that much more protected from the virus.

Credit: Shelby Kluver
Leon Gibson receives a sticker after getting his first dose of the Moderna Covid-19 vaccine.

Mike and Sue Ellis run a funeral home in the area and also got the shot on Tuesday. When News 8 asked Mike how he was feeling after getting the jab, he called it a 'little poke in the arm,' and told us he was actually feeling better than before.

"Being a funeral director and being 69 years old, there's just too much of [Covid-19] in the healthcare business and it needs to be addressed," he said.

His wife, Sue, agreed, saying the shot was no different from any other vaccination she had received, and that she was glad to get it over with.

"It feels like I have an end to the tunnel," she said. "We've gone through an awful lot in the funeral home - watching an awful lot of death, and we've just had enough of it. That's all there is to it."

When asked if she believed others should get the vaccine when it's available, Sue remarked that people should, "Get this done and get it over with and get it off your mind."

Another person who got vaccinated on Tuesday, Jason Whitmarsh, almost laughed when noting, "For all the trouble it's been to deal with this, that was pretty easy to get to a solution."

Whitmarsh is an activities assistant at a retirement home in Rock Island. He thanked the health department for offering the clinic and said he was looking forward to returning to life as it was pre-pandemic.

RELATED: Protecting the protectors: what vaccination means for a rural, volunteer ambulance service

"I'm relieved, quite relieved. My anxiety is much better, more manageable now that I can do my job and not worry about possibly dying," he said. "It is very reassuring that at least we're going back in the right direction - going back towards some sort of normalcy. I cannot wait to get my residents back to where they can play bingo and get together and get out of their rooms."

As Hill remarked during a pre-vaccination press conference, there's going to be several months of vaccinations required in Rock Island County before every one is offered the shot and things can truly return to normal.

But it's the first step, and it's a ray of hope that so many of us having been missing for so long.

"This has been an extremely trying time for everyone in this country. And we're gonna get through this with a sense of grace and treating people well," said Hill. "We have several more months of this, but we believe this is the beginning of the end."

NAT JANET 5:27 "We have several more months of this, but we believe this is the beginning of the end."