An eight-mile stretch of the river was closed after a boat sank in the Mississippi River at LeClaire, Iowa. 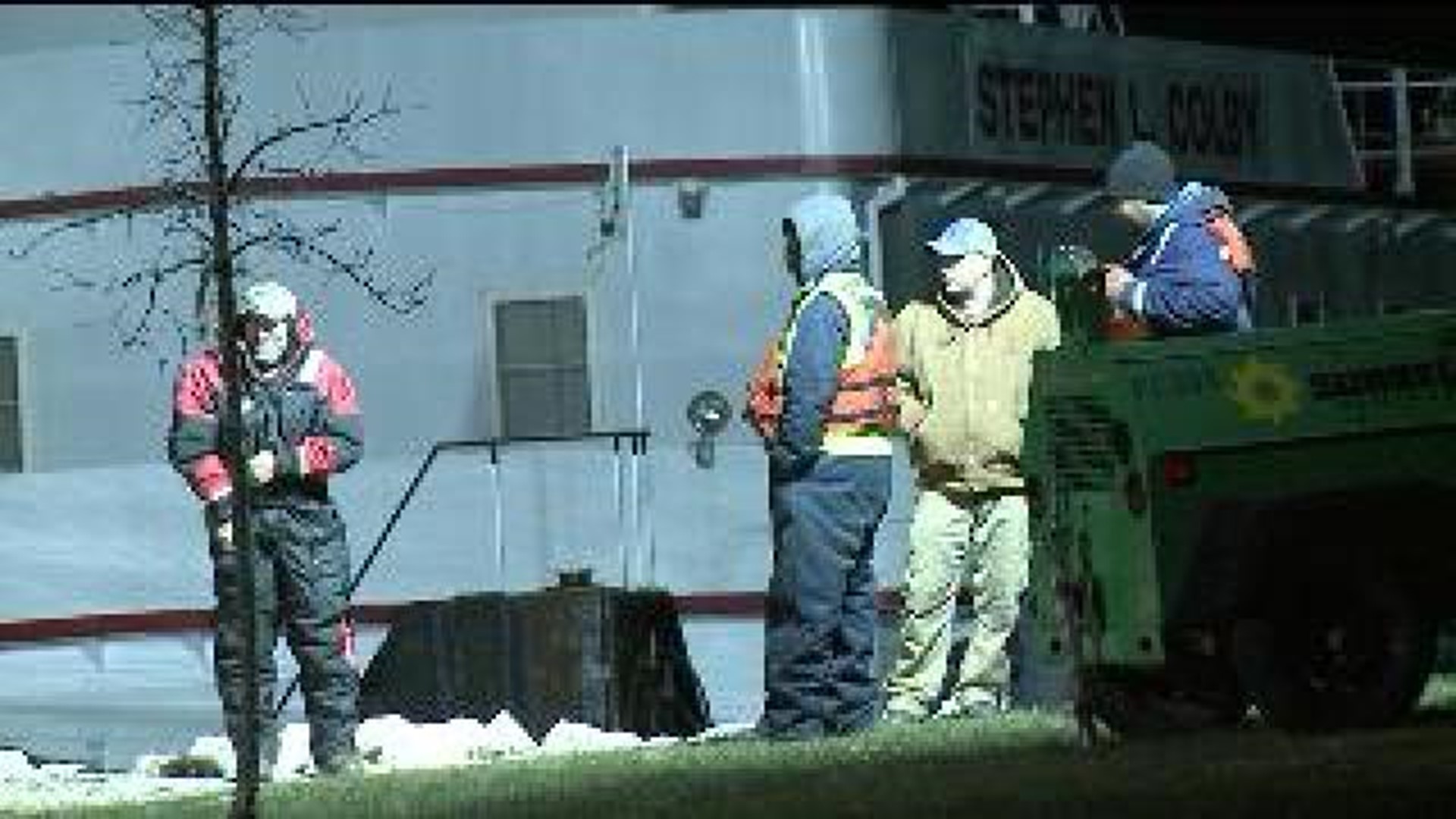 A tow boat was reportedly leaking fuel as it sank in the Mississippi River at LeClaire, Iowa on Monday, November 25, 2013.

Rescue crews were initially called to investigate a vessel leaking fuel and sinking at around 4:30 p.m. Monday, November 25th, 2013.

Emergency responders from LeClaire police and fire departments, as well as the U.S. Coast Guard, worked to keep the 144-foot Stephen L. Colby tow boat above water as it slowly sank in the Mississippi River.

At the time of the sinking, nine crew members were aboard. All made it to safety.

LeClaire Police Chief Shane Themas said the boat ran aground somewhere downstream where the hull of the vessel was damaged. After taking on water, the boat eventually sank to the bottom of the shallow river near the LeClaire shoreline.

Initial reports indicated crews could smell a probable fuel leak in the water, but their efforts after dark made it difficult to immediately see the location and amount of fuel that was discharged.

"We can't determine how much, if any, is leaking at this point, but we're taking the precautions. We can smell fuel, so we're going to go ahead and deploy the booms to contain it if it were to leak or start to leak as more water enters the vessel," said Themas around 6:30 p.m.

The morning after the boat sank, crews reported all pipes in the boat had been secured to halt any leaks from the vessel.  Deep sea divers had also been in the water to check for any oil leaks.

The Captain of the Port closed the Mississippi River from mile marker 493 to 501 to allow for cleanup and salvage operations.

Rescue crews were set up along the river near the LeClaire Police Station, which is on Cody Road near Davenport Street.

All of the nine crew members on the boat escaped safely.  No injuries were reported.

The Marquette Transportation Company, which owns the Stephen L. Colby, planned to send a salvage rig up the river Tuesday, November 26 to try to remove the boat from the LeClaire shoreline.  The salvage rig was expected to arrive Thursday, November 28.

A spokesperson for American Water in Davenport, Iowa said Tuesday that the utility is drawing water through a lower-level intake in the seawall as a precaution.

"Since fuels and oils are lighter than water and float on top, drawing from a lower intake makes it unlikely that we pull in anything to our treatment plant," said Lisa Reisen of American Water.

"We want to stress to our customers that their drinking water continues to meet all standards for safety," Iowa American Water President Randy Moore said later on. "We are monitoring the situation carefully and will take any additional measures required to assure our customers the reliable, high quality water service they expect and deserve from us."

Water Service officials in Moline say their utility routinely pumps water from lower depths, so they, too, are closely monitoring the water conditions but they were, so far, not affected.

For more continuing coverage of this story, click here.