Davenport Superintendent Dr. Art Tate accused state legislators of discriminating against the district, by not changing education funding in Iowa. 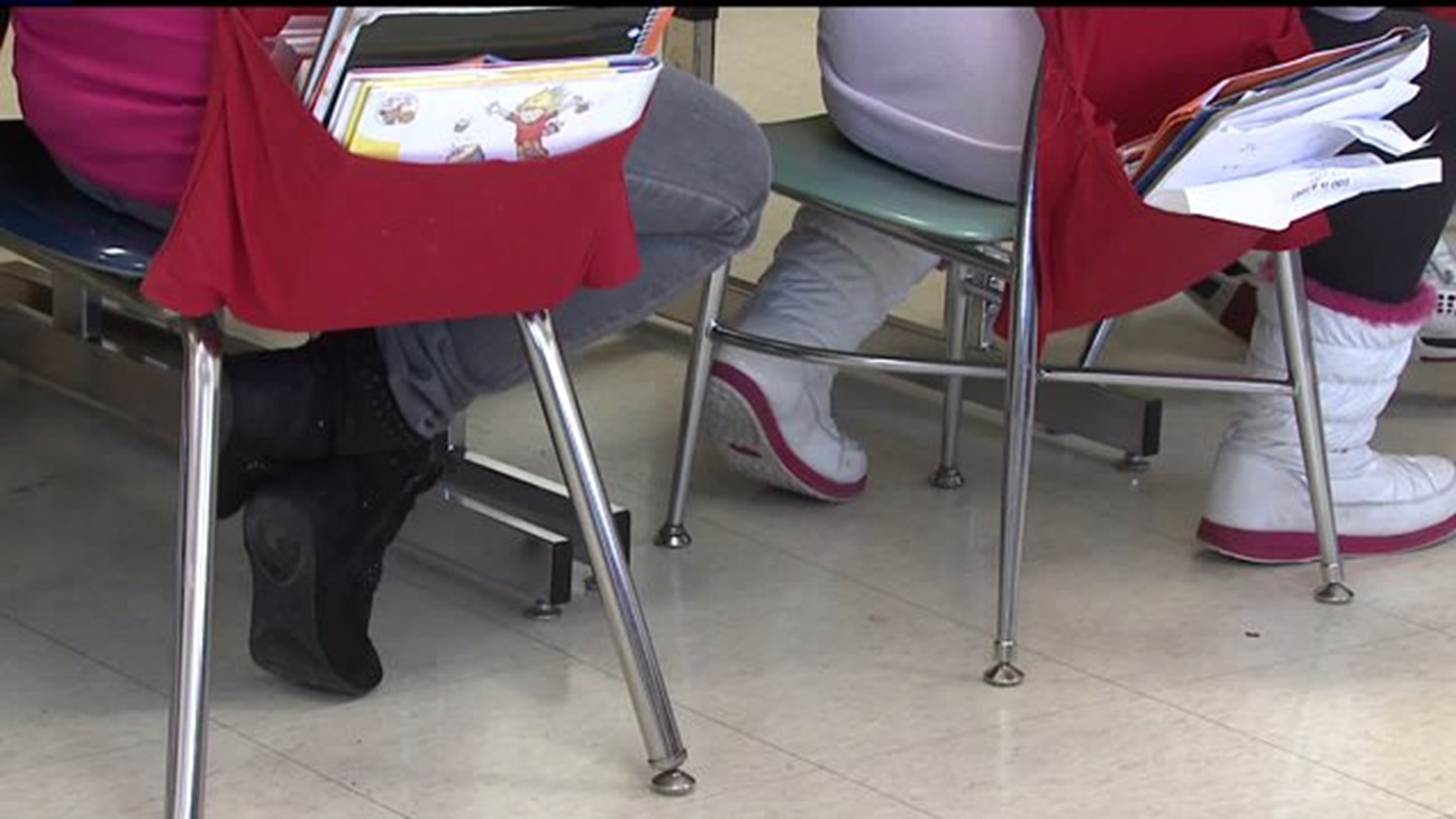 Tate says he will not back down from his promise to violate the law and dip in to the district's reserves to make up for their funding shortfall.

"As long as I am permitted to be the superintendent of this district, and until the state addresses the funding disparity, I will continue to spend more than the state allocation which is governed by statute," Tate said in remarks prepared for delivery at the June 22, 2015 school board meeting.

The Davenport district faces $3.5 million in budget cuts, which could mean the elimination of dozens of teaching positions for the 2016-2017 school year.   Because of how Iowa's funding formula is set up, Davenport receives $175 less per student than other districts like Pleasant Valley and Bettendorf, Tate said.

Davenport was among several districts which took their case to the state legislature, but instead of the 4 to 6 percent increase they requested, most saw about 1.25 percent in increased funding and the money is not allowed to be spent on teacher salaries.

Dr. Tate called the legislature's funding decision "state-imposed and state-condoned inequality of student funding for Davenport Community School District," and he reaffirmed his commitment to get the $175 per student from district reserves.

"I wish I had faith in a legislative system which recognizes and corrects blatant injustices. Unfortunately what I observed by this year’s actions shocked me, and I have almost completely lost hope in the government’s ability to erase the funding inequality. I am told to be patient, but my students – our students – cannot wait," Tate said.

"(I)n addition to my action to exceed the state spending authority, I think it is prudent to begin to investigate possible legal action against the state," Tate said.

By spending money not authorized by the state, Tate could potentially lose his job or be charged with a misdemeanor.

Get more coverage of the Davenport Schools Budget, click here.

Statement Made by Superintendent Art Tate at Board Meeting on June 22, 2015

On March 9th, I made a statement concerning my intention to enact budget decisions to turn around the more than 40-year state practice which provides less per pupil funding for our students than in other districts. At the time, I indicated that I was ready to face the serious consequences resulting from exceeding state-imposed allowable spending limits. The result of my stand was an outpouring of support and interest from students and parents, the Davenport community, and our governing board. There were also expressions of encouragement from around the state and nation.

At the legislature, the publicity surrounding the Davenport declaration prompted interest and resulted in a study bill being written in the Senate. That action gave us hope, and our board’s legislative advocacy committee worked diligently, investing time and effort in contacting legislators, including a visit to the capitol to meet with the governor and legislative leaders from both parties. Everyone needs to know that representatives of the board, along with a lobbyist from the Urban Education Network, were relentless in trying to garner support for legislation which would have permitted districts such as ours to bring per pupil spending to the same levels as the highest districts in the state, using only cash reserves.

At one point during the legislative process it was determined that the funding equality bill would not continue in the Senate. Subsequently, a similar bill was crafted in the House. With the legislative session over for this year, we all know that neither the House nor Senate had the will to take action to provide a short or long-term solution to the funding situation. Apparently, our legislature is in a two-year biennium session, and every bill which was introduced this year passes on to the next year of the session. So in theory, legislation to temporarily address the long-standing inequality will again be considered in 2016.

I cannot find the appropriate words to express my disappointment, dismay and alarm at the inability and unwillingness of the Iowa legislature to approve a statute addressing the long-standing practice of discrimination in education funding equality.

Here is the bottom line: There will be no legislative relief to allow this district to legally spend the additional $175 per student next school year. This is the amount required so that Davenport students would be worth the same as other students in the state. The legislators have spoken; students in Davenport, and hundreds of other districts, are worth-less than students in the top funded districts in the state according to per pupil spending.

I wish to thank,

I want to personally apologize to the activist students, parents, and community members for not taking my stand in prior school years or earlier in this year, to give us more time to work through the complicated, laborious, confusing legislative process.

I have some questions for every Iowa legislator:

I am curious about political priorities. A gas tax increase was passed in record time with almost no controversy and little discussion. The rationale was that the problem of highway infrastructure and maintenance had been ignored for too long, and it was time to act. I wonder why the unacceptable disparity in per pupil funding that has gone on for over 40 years, disadvantaging students throughout the state, was not viewed with equal enthusiasm as fixing bridges and roads. Of course, road upgrades are about safety and commerce, but equal funding for each and every student in the state goes to the heart of equal opportunity; withholding funds from needy students is a matter of health, safety and security in districts such as Davenport.

It has been suggested that the main reason why the legislative fix to promote funding equality did not find its way to the light of day to be voted on was because it threatened property taxes. Apparently, although the proposed bill would not have permitted districts to increase property tax levies, some legislators held the opinion that since reserve cash accounts originally came from property taxes, spending reserve funds would be like spending property tax resources.

I understand about being fiscally responsible. As a superintendent, I enacted conservative fiscal practices for over 18 years, reducing district operating budgets by over $30 million. I respect the protection of property taxes; this year, I recommended to the school board that we reduce the property tax levy. I take seriously my responsibility to propose budgets and plans which respect our tax base. I humbly suggest that equality in the way we value every student trumps the unwavering adherence to rejecting every measure which has any relationship – no matter how remote – to property taxes. In my view, reversing discrimination that has taken place over scores of years, therefore depriving students of an equal chance to succeed, should be more important than uncompromising partisan politics.

In my opinion, one of the most important planks of every political platform has to be equality of educational opportunity. I am not an elected official, but I cannot understand how an Iowa Senator or Representative can turn their back on the temporary solution for a funding process which has institutionalized gross discrimination against thousands of Iowa students. I maintain - and have told everyone who would listen – that the legislative temporary fix would have been fair, logical, and cause no harm.

I am publicly repeating my declaration that our students in Davenport are as worthy of financial support as any student in the state. Our students need to know that their superintendent values them and is declaring to every other district, to the governor, and to every legislator, that our students are worthy of equal state funding. I intend to spend up to $175 per pupil more than the state funding formula allows. One hundred seventy-five dollars is the difference in what Davenport is allowed to spend according to the state funding formula, and what other districts with the highest per pupil spending are allowed to spend per student. Next year our students will not be worth-less. As long as I am permitted to be the superintendent of this district, and until the state addresses the funding disparity, I will continue to spend more than the state allocation which is governed by statute. I will no longer accept the state-imposed and state-condoned inequality of student funding for Davenport Community School District.

I wish I had faith in a legislative system which recognizes and corrects blatant injustices. Unfortunately what I observed by this year’s actions shocked me, and I have almost completely lost hope in the government’s ability to erase the funding inequality. I am told to be patient, but my students – our students – cannot wait.

Accordingly, in addition to my action to exceed the state spending authority, I think it is prudent to begin to investigate possible legal action against the state. Since the 1970’s, Davenport Community School District has been short-changed through the discriminatory funding formula to the tune of an accumulated $142 million. That is $142 million which could have been spent introducing additional quality programs and services for students. Imagine the good that those additional resources could have accomplished. Ponder the damage which the lack of funds may have allowed. We are a district with a 63% free and reduced lunch enrollment. Our need cannot wait for legislative processes and endless study groups. Our needs are now.

I am looking for legal advice. Who has standing to sue the state? What are the steps? What are the costs? How to fund? I wonder about the power of scores of districts in a lawsuit to recover the total funds lost from a flawed funding formula which has been in place for over 40 years.

I also want to challenge some of our motivated students and talented teachers to study the Iowa Constitution and determine whether it does or does not support equality in educational opportunity. If the state Constitution does not now guarantee equality of funding, an opportunity exists for the Davenport Community School District to lead the way yet again to seek such a constitutional amendment.

In conclusion, as a school system and community, we should be proactive in attacking the problem of inequality of funding; from what I have seen this year, we cannot rely solely on the political process. We must continue to act boldly and with conviction.

And my final comments are meant for our students: Your education is worth everything to me, and I will use my time and energy to get the State of Iowa to recognize the importance of equal funding for all students.