An officer involved shooting on April 1 left one man dead. The next day, two lone protesters met outside of the Rock Island Police Department with opposing messages. 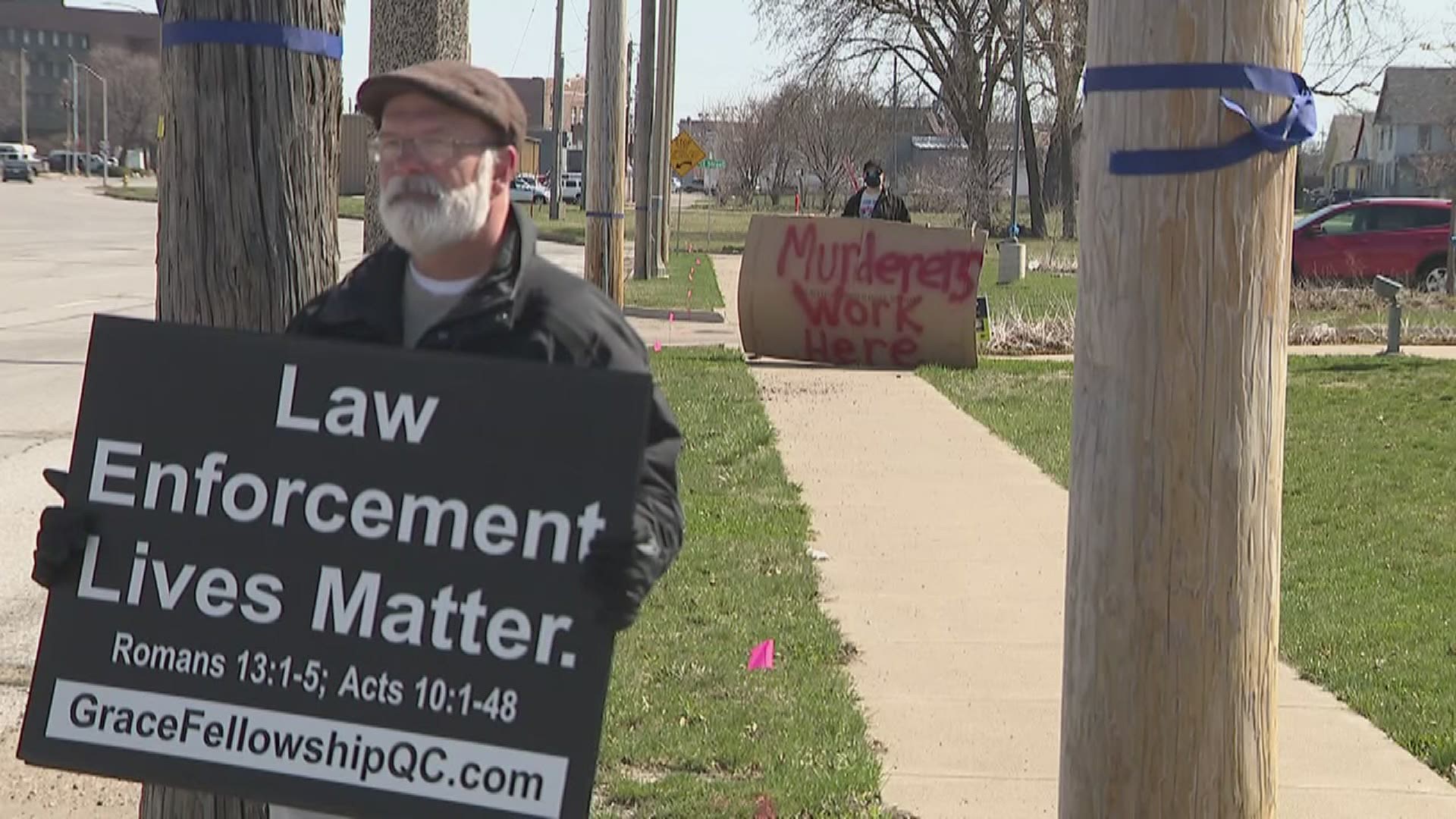 ROCK ISLAND, Ill. — One man is dead after an officer involved shooting in Rock Island on Thursday, April 1.

The Rock Island County Coroner's office has confirmed it was 25-year-old Deshawn Tatum of Rock Island who was killed. Preliminary cause of death was gunshot wounds to the head and chest.

Police say they stopped Tatum around 6:20 on Thursday evening, then he took off running. They claim they chased him to the Kum & Shop gas station on 11th St., where he then hijacked a car from a female bystander.

When officers tried pulling him out of the car, they say he put it in reverse, dragging multiple officers. That's when police began firing.

All officers involved are now on administrative leave, as per department procedure. An investigation is currently being conducted by the Rock Island County Integrity Task Force.

Following the shooting, two lone protesters were seen outside of the Rock Island Police Department on Friday morning. Both were white, both were men, and both were on a corner in front of the station, but that's where the similarities ended.

On one corner stood Tony Miano, a Davenport resident who says he worked as a Sheriff's Deputy in LA County for years. He said after hearing on the news that officers were injured, he decided to come down to the station.

He was holding up a black and white sign that read "Law Enforcement Lives Matter."

"I'm a former officer myself, so anytime I hear of local officers being injured in the line of duty I go out to the departments and try to show my support," said Miano.

"I'm here because I believe what happened yesterday was murder and I don't think that the police should be going around - whether the person's guilty or not guilty - just shooting and killing citizens. Especially Black citizens," he said.

The two men only briefly spoke to each other while setting up, he explained. After exchanging a few words, he said things got heated, and they decided to occupy opposite corners of the sidewalk.

He says his protest is about bringing attention to a long list of police shootings.

"I'm sick of it. I mean, whether the kid pulled the gun on him or whatever happened yesterday, the cops aren't the judge, jury, executioner and they shouldn't be killing people in the streets," he argued. "There are other ways to deescalate the situation and subdue a suspect rather than shoot and kill him."

He brought up recent mass shootings, including those in Boulder and Atlanta, where the shooter was brought to jail without deadly force from police.

"They didn't shoot them, they didn't do anything and they were heavily armed," he said. "They're in prison and they're still alive today."

But Miano disagreed with his sign, calling it a "lie."

"The default position now isn't to give the officer the benefit of the doubt, but to accuse the officer of murder. And frankly, that's evidence of the decaying society that we live in," said Miano. "No officer, no person joins law enforcement with the hope that someday they're going to have to take someone's life."

To him, police officers shouldn't be grouped under what he called a "blanket statement."

"Law enforcement draws from the same fallible human race as every other profession - they don't always get it right," said Miano. "And for an officer to be put through a critical incident like that - and they knew the job was dangerous when they took it, granted - but they're human beings."

As of right now, Rock Island Police have not released any further information on what led to the firing of weapons on April 1, nor what injures the three officers sustained.

Incumbent Mike Thoms said he was "heartbroken" for everyone involved, and asked for patience, kindness and respect as the police launched their investigation. He said there is "much work to be done" and emphasized the importance of transparency and honesty.

His challenger, Thurgood Brooks also called for prayer, but said more needed to be offered than just that. Moving forward, he's calling for increased training for police officers, as well as provide them with more resources to improve working conditions and their own mental health. He called for interconnected trust to be built between the city's police force and Black and Brown communities. And he discussed ways to prevent a similar situation from happening in the future - discussing how to "RE-fund" the police, so that alternative solutions are viable.

Across town, where the shooting took place, a small memorial was set up. Flowers, balloons, candles and bottles of patron filled the space where Tatum was shot.

A peaceful police protest against brutality and racism has been planned by community leaders for Saturday, April 3 at 3pm. It will take place in front of the Davenport Police Department. Organizers say all are welcome and masks are encouraged.