Turkeys from Walcott to get Presidential pardon

A Walcott farmer had the honor of raising the National Thanksgiving Turkey. 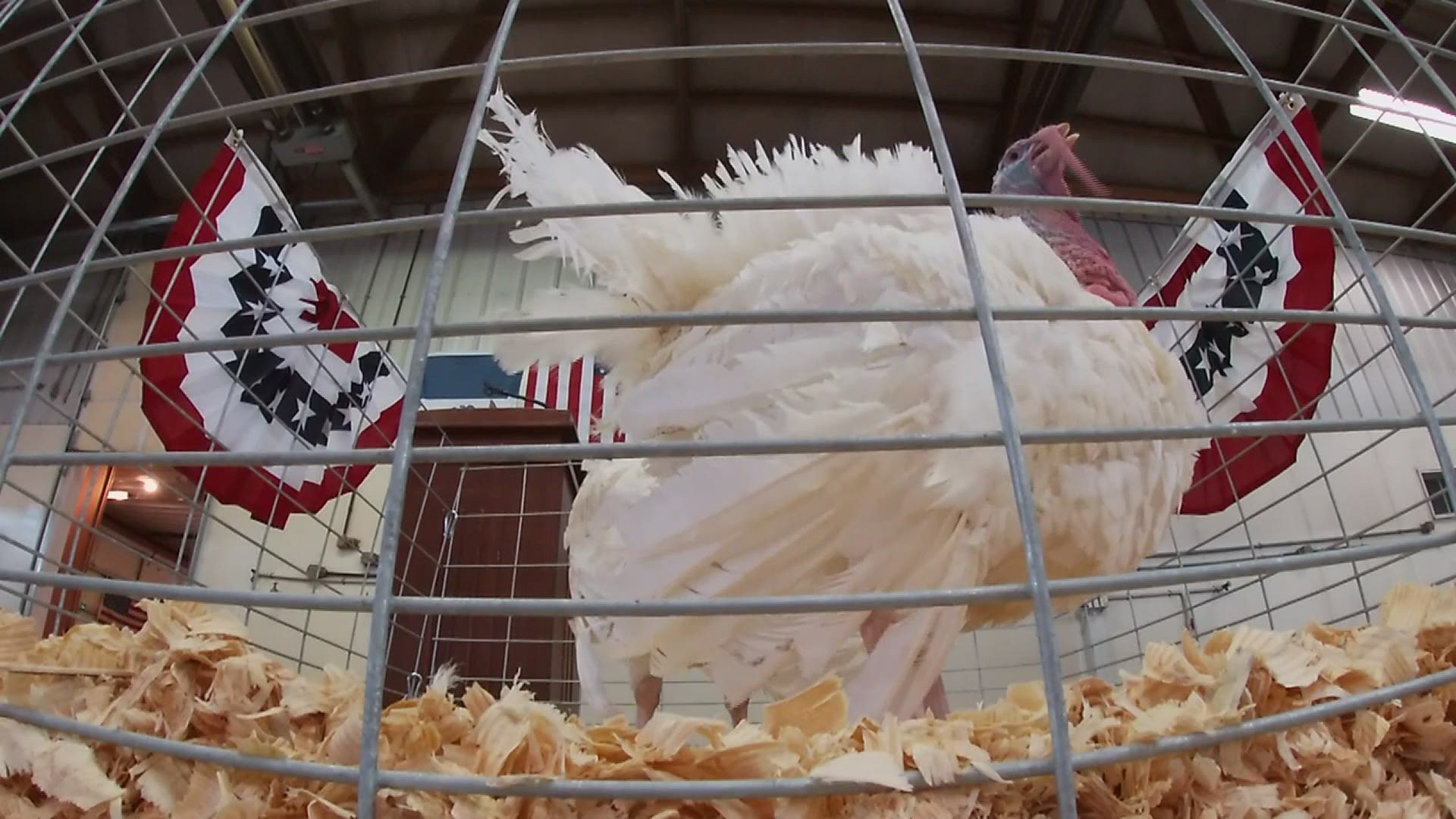 WALCOTT, Iowa — An Iowa farmer will spend his Thanksgiving in Washington, D.C. this year celebrating his flock of turkeys. As the Chairman of the National Turkey Federation, Ron Kardel was chosen this year to raise the Presidential Flock. Two birds will make the trip to Washington, D.C. to be pardoned by President Donald Trump this year at the White House.

During a small send-off celebration Friday afternoon, the turkeys were held in a small pen draped with red, white and blue. They’d let out the occasional “gobble”.

“When they strut like they're doing right now, they're being sexy,” Kardel joked. “They're showing off. There’s got to be a hen here someplace.”

Ron Kardel is a sixth-generation farmer in Walcott, Iowa. The birds arrived at the farm in July at just a day old. On Thanksgiving, they will be 19 weeks, weighing about 42 pounds each. They’re raised mostly the same as the other turkeys on the farm, except they are housed in a separate building, and they are given a little more personal attention.

Kardel will put them on a table, so they can get used to being elevated. He also gets them use to the sound of a human voice and touch. A radio plays music to get them used to other sounds that they may hear during the pardoning ceremony at the White House. The turkeys are essentially “trained” for their time on the stage.

“For us and our family, it’s a huge honor,” explained Kardel, “We get to take our kids and grandkids into the Rose Garden and meet the President and his wife. We get to see the Oval Office. It’s pretty exciting.”

The turkeys will be driven to Washington, D.C. in a van, but the second they arrive, the celebration begins. The turkeys get a red carpet welcome at a fancy hotel. They have their own room, adjoining with their caretaker.

“It really is an honor, and we want to treat it as special as it is for all of Iowa agriculture,” explained Dr. Dan Thomson, Chair of the Department of Animal Science at Iowa State University. Once they’re pardoned the turkeys will live out their days at Iowa State, under the care of the students and staff.

The turkeys will also be officially named by the Trump administration. For fun, there was a contest at Walcott Elementary for the kids to pick the turkey names. They settled on “Corn” and “Cob”. They’ll make that suggestion to the White House for consideration.

“Who’s gonna tell the White House what to do?” Kardel said. “I don't want to be audited.”

Iowa Secretary of Agriculture, Mike Naig congratulated the Kardels on the honor.

“We are proud of you,” he said. “And to all Iowans, buy two, three four, or five turkeys this year. Eat lots of turkey next week for Thanksgiving, and count your blessings. We really do have a lot to be thankful for this year.”