A local artist is withdrawing her entry into an annual holiday competition in Davenport, after designing a tree featuring President Donald Trump. 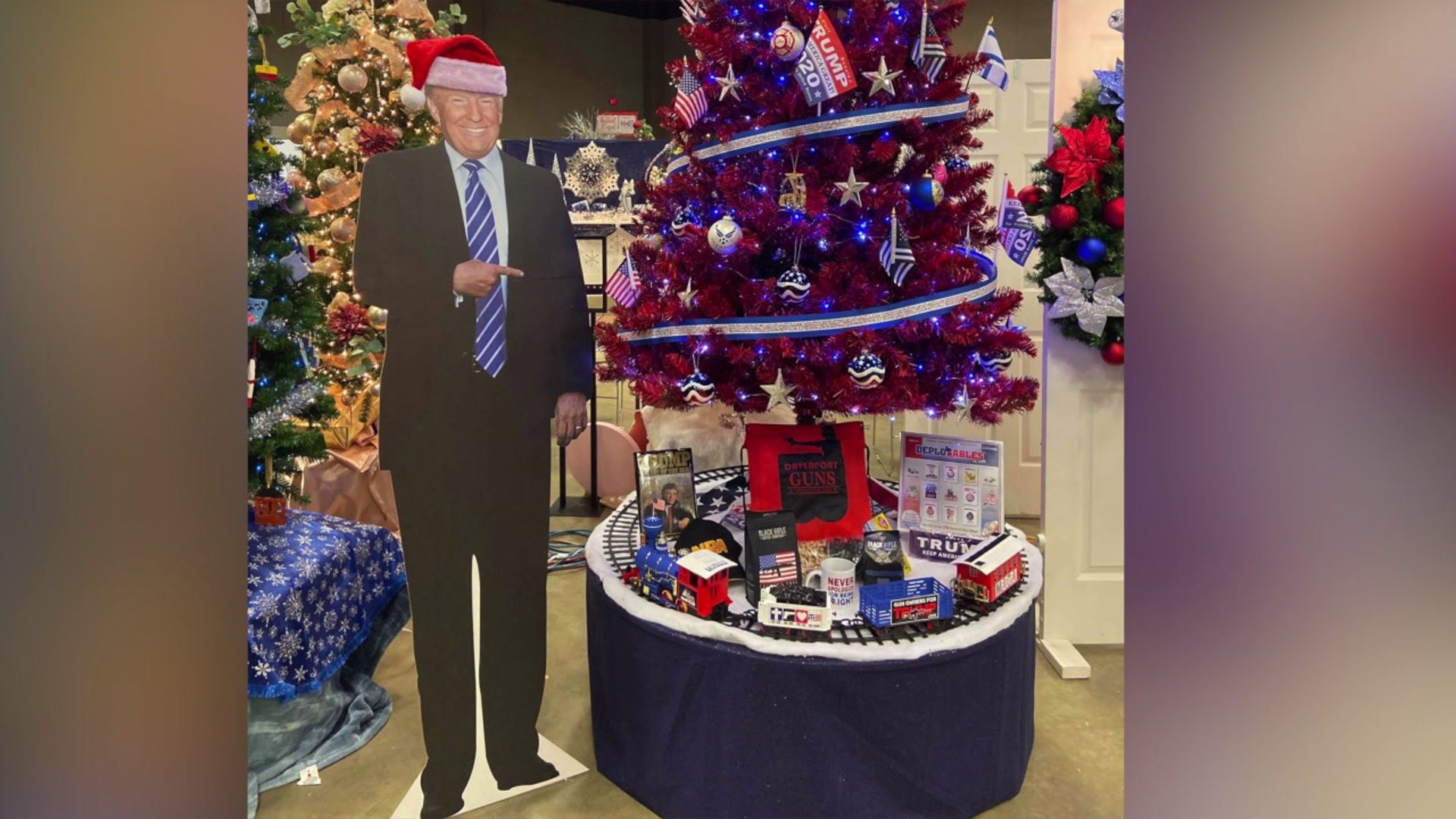 UPDATE (11/20/19) -- The local artist who withdrew her entry into the annual Festival of Trees competition in Davenport has moved her tree, which features President Donald Trump, to Davenport Guns.

The tree was disqualified for being "too political" for the Festival of Trees.

It is now up for silent auction. All money raised will be donated to Camp Valor Outdoors, an organization that benefits wounded soldiers and their families.

So far, at least $300 has already been raised, and Davenport Guns has also decided to raffle off a Howa rifle, which is valued at about $1,400.

"My main goal was just to raise a lot of money for a great cause and Davenport Guns has been just amazing and very supportive and I know we can still reach that goal here," said the tree's designer Ashley Richardson. 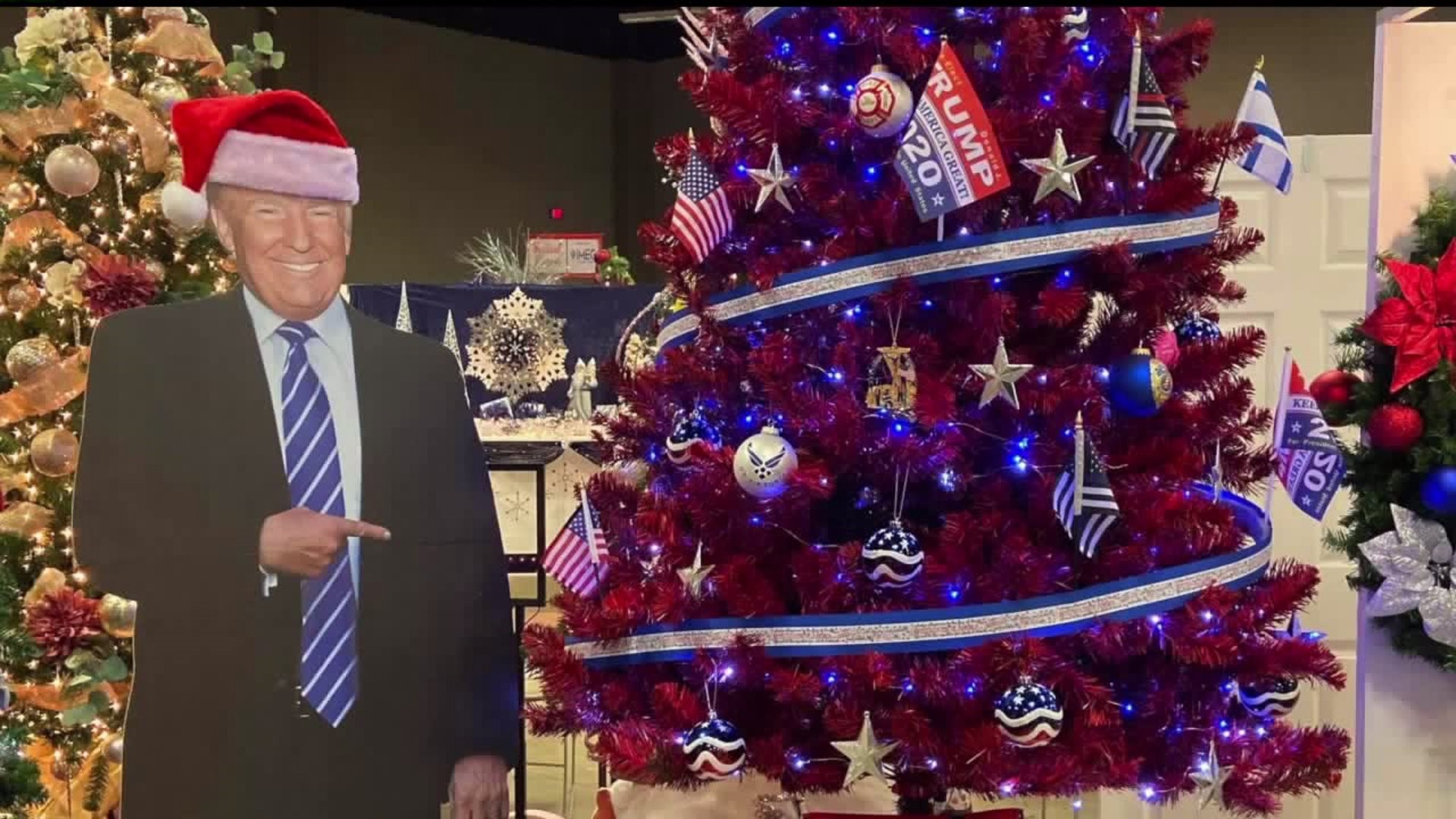 DAVENPORT, Iowa -- A local artist is withdrawing her entry into an annual holiday competition in Davenport, after designing a tree featuring President Donald Trump.

Organizers at the Festival of Trees wouldn't allow the tree, named "Make Christmas Great Again," saying they do not want political statements included in the festival.

"We just believe that Festival of Trees is not the space for it. It’s a time that people can take a break from all of the politicians," said Kevin Maynard, Executive Director of Quad City Arts

The Festival of Trees is an annual event where members of the community design themed trees for auction, all to raise money for the Quad City Arts.

The tree was designed and submitted by Ashley Richardson.  She has a winning history at the festival, winning first place in 2018 and honorable mention in 2017.

This year, her tree was adorned with American flags, Trump 2020 flags, ornaments with military logos, red, white and blue pines and a ribbon wrapped around it from top to bottom.  As part of the display, a life-sized cardboard cutout of Donald Trump was set up next to the tree.

"The tree was a great salute to first responders, which is what she described in her form, and it is very well done. It is a great tree," said Maynard.

Still, the Quad City Arts organization said political candidates are not allowed to participate in any Festival of Trees events and can't be featured in any design aspects.

Organizers asked Ashley to remove the President Trump cardboard cutout, but Ashley decided to withdraw her entry altogether, saying her goal was to design a tree that could help raise a significant amount of money for the organization.

"We put out a guideline as to what should be available at Festival, one of those being no politicans," said Kevin Maynard, Executive Director of Quad City Arts, "(if) that's the tree you want to create you should create that tree.  We are just not going to showcase it at Festival."

Ashley said when she asked organizers for the policy that stated her tree could not feature political messaging, the policy did not exist.

The organization admitted that its policy could have been more clear, and said they planned to re-work their guidelines to avoid future confusion.

"The design manual focuses on logos and organizations primarily and so yes it could have been clearer in that and it will be more clear going forward," said Maynard.

Ashley said she will be moving her tree to Davenport Guns on November 20.

She hopes people will visit and donate money that will eventually be given to another area organization.

"All I wanted to do is raise money for the Quad Cities," said Richardson.

The Festival of Tree's is an 11-day festival. It will open on November 23 and run through December 1st.