Soon after his feud with several Democrat Congresswomen, President Trump is attacking another minority lawmaker on Twitter. 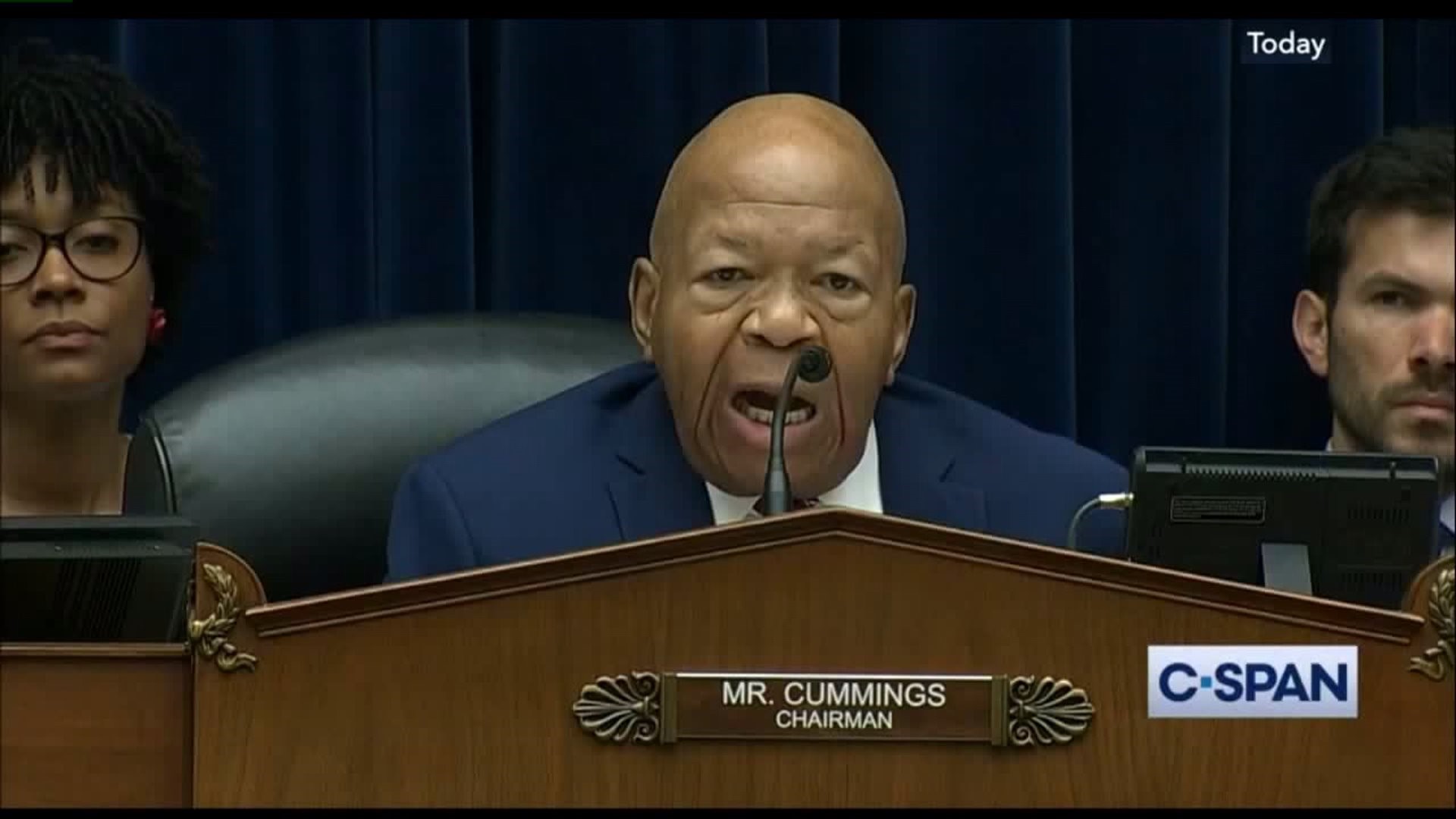 Trump's tweets against Democratic Rep. Elijah Cummings, chairman of the House Oversight Committee, is the latest verbal assault against a minority member of Congress who is a frequent critic of the President. Two weekends prior, Trump -- in language that was later condemned and deemed racist by a House resolution -- told four progressive Democratic congresswomen of color to "go back and help fix the totally broken and crime infested places from which they came." Three of the four were born in the US, and the fourth is a naturalized US citizen.

Trump's tweets attacked Cummings, 68, who is originally from Baltimore and represents Maryland's 7th Congressional District, for erupting at acting Homeland Security Secretary Kevin McAleenan over border conditions during a congressional hearing on July 18. Cummings' committee has also launched a number of investigations into the Trump administration related to Trump's finances and White House practices, including security clearancesand Hatch Act violations.

The President on Saturday suggested that conditions in Cummings' district, which is majority black and includes parts of Baltimore, are "FAR WORSE and more dangerous" than those at the US-Mexico border.

"If he spent more time in Baltimore, maybe he could help clean up this very dangerous & filthy place," Trump wrote, arguing that Cummings' "district is considered the Worst in the USA" and "no human being would want to live there."

In Cummings' district, about 52% of the population is black, while nearly 36% is white, according to US census estimates.

The President gave no indication of the basis of the claim but the tweets followed a segment that aired an hour earlier on Fox News, in which a Republican strategist said conditions in Cummings' district were worse than those at the southern border.

"Mr. President, I go home to my district daily," Cummings wrote on Twitter Saturday in response. "Each morning, I wake up, and I go and fight for my neighbors. It is my constitutional duty to conduct oversight of the Executive Branch. But, it is my moral duty to fight for my constituents."

Cummings told ABC News recently that Trump's "go back" remarks aimed at the four congresswomen brought back memories of the racism he faced as a boy growing up in Baltimore in the 1960s, echoing the same "very painful" racist insults he had heard during childhood.

Trump has used similar language before to criticize Democratic Rep. John Lewis, a civil rights icon, and the Georgia district Lewis represents, which includes most of Atlanta.

Reaction to Trump's tirade was swift with Baltimore Mayor Bernard C. Jack Young tweeting that it was "completely unacceptable for the political leader of our country to denigrate a vibrant American City like Baltimore, and to viciously attack U.S. Representative Elijah Cummings a patriot and a hero."

House Speaker Nancy Pelosi -- whose father represented the city in Congress, and, along with her brother, served as its mayor -- echoed those sentiments, condemning Trump's tweets as racist.

".⁦‪@RepCummings⁩ is a champion in the Congress and the country for civil rights and economic justice, a beloved leader in Baltimore, and deeply valued colleague. We all reject racist attacks against him and support his steadfast leadership. #ElijahCummingsIsAPatriot," Pelosi, who was born in Baltimore, tweeted.

"Yo Trump, Hands off #ourchairman @RepCummings who is centered in American values that you will never understand. He is a fighter for the people & a leader you will never be," Tlaib of Michigan said. "While you go on vacations & tweet, @RepCummings held a hearing on high costs of medicine just yesterday."

Ocasio-Cortez, a New York Democrat, tweeted of Cummings: "He makes the country better. You want to be on his team."

Other Democrats came to Baltimore's defense on Saturday, including California Sen. Kamala Harris, whose national 2020 campaign headquarters is located there.

"Baltimore has become home to my team and it's disgraceful the president has chosen to start his morning disparaging this great American city," Harris wrote on Twitter.

Fellow 2020 candidate Sen. Cory Booker of New Jersey tweeted in part that "this is a moral, defining moment in America," adding, "Silence is toxic complicity."

The Maryland chapter of the NAACP dubbed Trump's tweets racist and called for launching impeachment proceedings into the President.

"These latest tweets reaffirm the NAACP Maryland State Conference's position echoing the call of the National NAACP that this president must be impeached," NAACP MSC President Gerald Stansbury said in a statement. "A nation is judged by how it treats its most vulnerable citizens, and we are ashamed of his rhetoric. America deserves a president who lifts our cities up, not one who heaps trash talk on them."

The NAACP's delegates voted unanimously at the group's annual convention in Detroit on Tuesday to call on the House to begin impeachment proceedings against Trump, saying in a statement, "This President has led one of the most racist and xenophobic administrations since the Jim Crow era." The move placed the nation's oldest civil rights group alongside more than 100 congressional lawmakers in calling on the House to take the first step in a lengthy impeachment process.

Last week, 95 members of the House voted to keep alive Texas Democratic Rep. Al Green's effort to impeach the President, though it was ultimately killed by the chamber.