Supporters of mayoral candidates turn up the heat outside city hall. 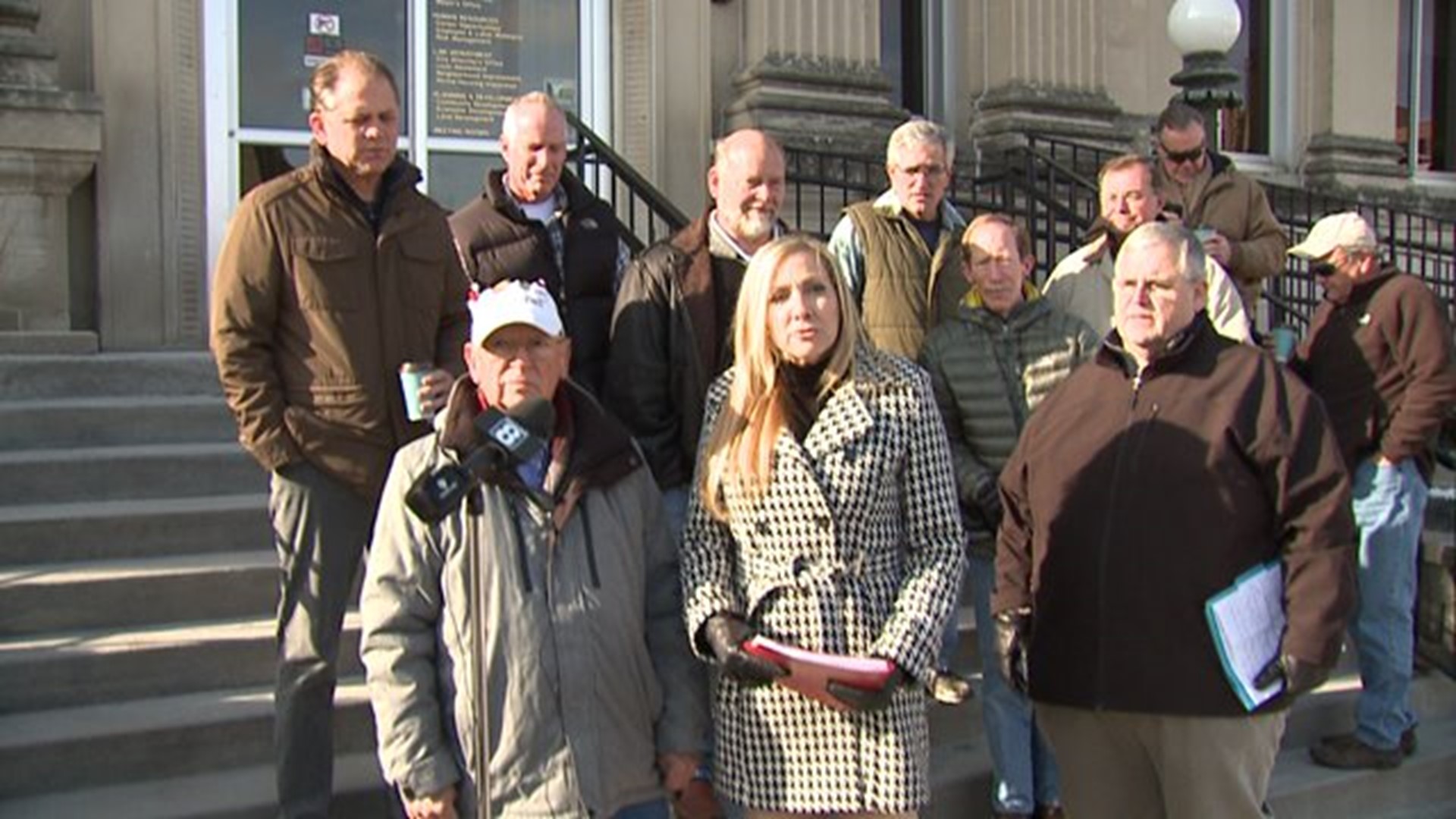 UPDATE: The attorney for Stephanie Acri is requesting that Tracy Koranda be recused from the election board hearing Mayor Raes' objection because she will be called as a witness. That request made by email. Koranda is one of three people on the board. A potential replacement has not been named.

It's below freezing, but the heat is on at Moline City Hall, with a renewed call for Mayor Scott Raes to ditch his attempt to kick his competition off the ballot, including support from some sitting alderman who say "defective" paperwork distributed by the city clerk is to blame.

Mayoral candidates Bob Vogelbaugh aka "Mr. Thanksgiving", and business owner Stephanie Acri held a news conference Friday on the steps of City Hall, three days after WQAD News 8's initial report on the controversy. They were joined by several aldermen and supporters who say voters should have a choice in the April election.

"It's becoming a political mess here over nothing. He's making something out of it bigger than it needs to be," said Vogelbaugh.

"We all come from different backgrounds and we'll all lead differently and the people of Moline ought to be able to choose who their mayor is," Acri said.

Mayor Raes is challenging their petitions, he says, because the pages weren't numbered as required by state election law, and likens the mistake to hitting a home run and not tagging all the bases.

Today, two sitting aldermen went to bat for the other team.

Alderman Mike Wendt said he unknowingly failed to number his nominating petitions two years ago, as did every single candidate that election,  And not one of the petitions faced any kind of legal challenge.

"All six candidates for alderman two years ago were all provided the same defective forms and 100 percent of them did not number them," Wendt, an attorney said.

Wendt said the forms distributed by city clerk Tracy Koranda two years ago are the same as the ones in question this election, and don't clearly have space to number the pages, and part of the wording is missing.

"I think that is pure evidence the forms are defective," he said, adding he will ask for a review of why the "defective" forms were deemed suitable by Koranda two elections in a row.

Five out of 11 candidates who took out nominating petitions this time around, failed to number the pages. Wendt say  the forms are misleading and flawed, and should not be grounds to eliminate candidates who filled them out in good faith.

"I'm calling on the mayor as the leader of our city to address the failure we've done as a city to these candidates and our residents", Wendt said.

Alderman David Parker is running unopposed, and failed to number his petitions, too , and says what is good for one candidate, should be good for all.

"I  did nothing different than they did, nobody's challenging my petitions," Parker said.

"I simply believe that Scott is not using his best judgement, I think hopefully by the time the meeting rolls around on Monday that he'll have an opportunity to reflect on the bad decisions he's made and drop his challenges," Parker said.

Businessman Hunt Harris says he has supported Raes in the past with money from his Committee for Better City Government, but is now backing Acri and feels Raes' attempt at booting her and Vogelbaugh off the ballot will backfire, big time.

"We've always funded Scott in the past, he's a nice guy. He's never had to raise money. I think Scott felt he was backed into a corner, he had Mr. Thanksgiving who has great name recognition, and Stephanie with name recognition and lots of aldermanic support, and Scott was gonna have a race. So what's the easiest way to get out of that situation? Eliminate your competition," Harris said.

"It's not the way to govern. It's a good way to ruin your reputation, and I'm very sorry it has come down to this. I'm hoping it's resolved so the citizens are given a choice on who they want for mayor," said Harris.

Harris and Alderman Wendt also questioned how the city clerk can sit on the electoral board as one of three judges when she is the one who distributed the forms in question, and her boss the mayor is the one who filed the complaint.

'I think the fact that she is on the election commission making this decision is really a conflict of interest and not in the best interest of the city," Harris said.

If Raes is successful, he would be the only mayoral candidate on the ballot.

A hearing on the objections is set for 11am Monday.