UN and Afghanistan's Taliban, figuring out how to interact

The U.N. can withhold or bestow formal acknowledgement of the Taliban, and use this crucial leverage to exact assurances on human rights and other issues. 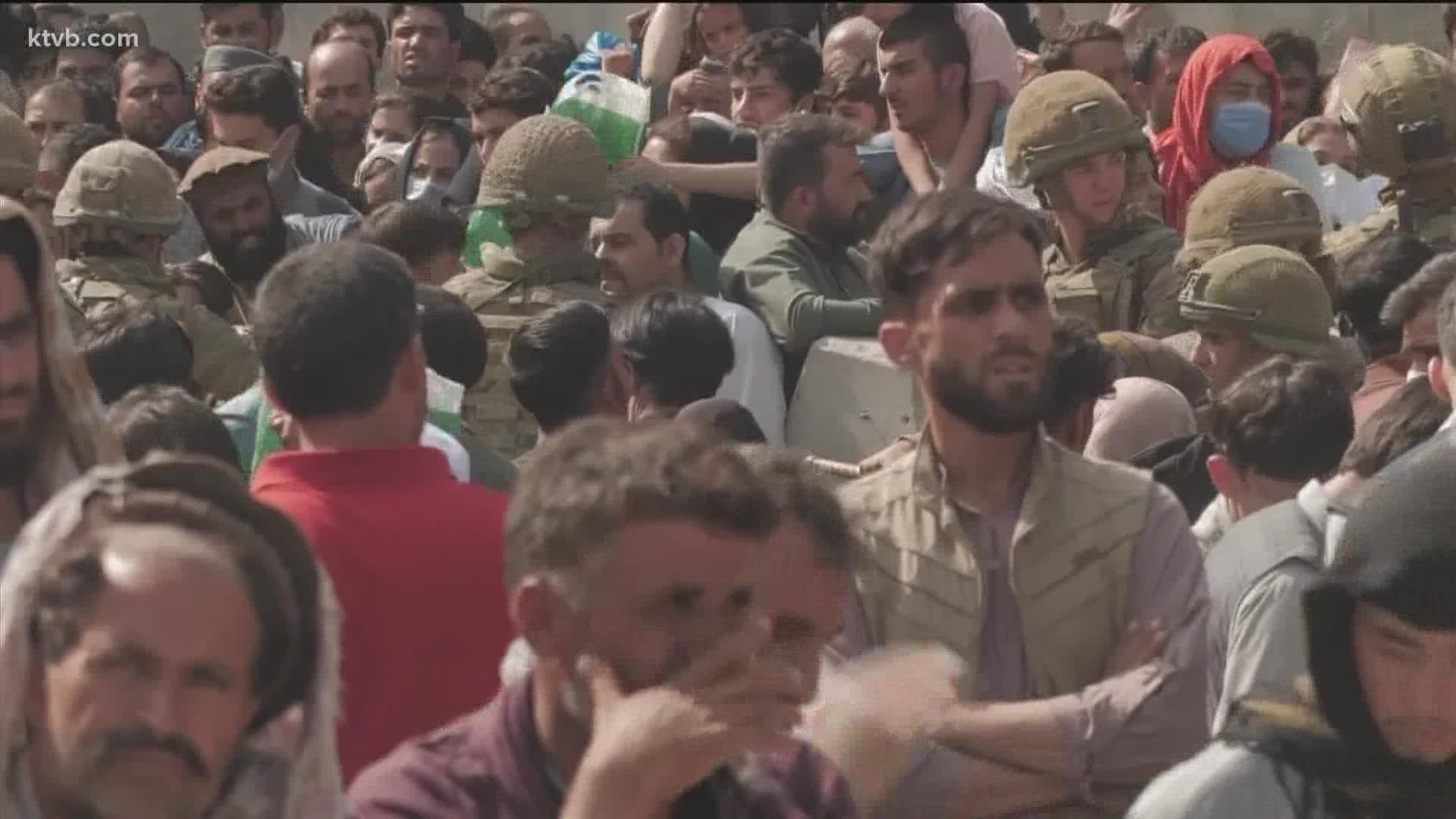 It's been little more than a month since Kalashnikov-toting Taliban fighters in their signature heavy beards, hightop sneakers and shalwar kameezes descended on the Afghan capital and cemented their takeover. Now they're vying for a seat in the club of nations and seeking what no country has given them as they attempt to govern for a second time: international recognition of their rule.

The Taliban wrote to the United Nations requesting to address the U.N. General Assembly meeting of leaders that is underway in New York. They argue they have all the requirements needed for recognition of a government. The U.N. has effectively responded to the Taliban's request by signaling: Not so fast.

Afghanistan, which joined the U.N. in 1946 as an early member state, is scheduled to speak last at the General Assembly leaders' session on Monday. With no meeting yet held by the U.N. committee that decides challenges to credentials, it appears almost certain that Afghanistan's current ambassador will give the address this year — or that no one will at all.

The U.N. can withhold or bestow formal acknowledgement on the Taliban, and use this as crucial leverage to exact assurances on human rights, girls' access to education and political concessions. This is where the power — and relevance, even — of the 76-year-old world body still holds.

Afghanistan is a good, and perhaps extreme, representative case study of precisely why the United Nations was founded in the aftermath of World War II, said Rohinton Medhora, president of the Center for International Governance Innovation in Canada.

"If you're the U.N. and you want to represent the family of nations, then you want absolutely everyone of the family there — even you know, the distant cousin that not everyone's proud of," he said. "So the U.N. needs Afghanistan and countries to demonstrate the value of many of its operations."

In Afghanistan, the United Nations can deploy the weight of its vast aid and development programs to show just how crucial its often underfunded agencies are in providing stability and security. The country is facing multiple humanitarian crises and near-total poverty due to fallout from the political situation.

There are already growing calls for aid to be contingent on ensuring girls' access to education. Despite promises to be inclusive and open, the Taliban have yet to allow older girls back to school, have curtailed local media freedoms and returned to brutal practices  like publicly hanging dead bodies in city squares.

"Taliban does not represent the will of the Afghan people," Afghanistan's currently accredited ambassador to the U.N. in Geneva, Nasir Andisha, told The Associated Press.

If the United Nations recognizes the Taliban's claim to power, Andisha said, then it sends a corrosive message to others — be it in Yemen or in Myanmar — that they can take up guns, create violence, join with U.S.-designated terrorist groups.

"I think for the world, for the United Nations, it's time to use this as a leverage," Andisha said.

The Taliban's appointed U.N. representative, Suhail Shaheen, a former negotiator and political spokesman, told The Associated Press that his government should be admitted into the club of nations and that "all borders, territory and major cities of Afghanistan are in our control."

"We have support of our people and because of their support, we were able to continue a successful struggle for independence of our country which culminated in our independence," he said. "We have all the requirements needed for recognition of a government. So we hope the UN as an neutral World Body recognize the current government of Afghanistan."

More than a dozen ministers in the all-Taliban Cabinet are on a U.N. blacklist, including the group's foreign minister, whom Andisha and other Afghan diplomats abroad are refusing to speak to.

Andisha was serving in Geneva under the U.S.-backed government of Ashraf Ghani when the president fled Afghanistan Aug. 15 to seek refuge in the United Arab Emirates as the Taliban encircled the capital. Ghani's government swiftly fell thereafter.

Andisha is still holding meetings with representatives from countries around the world, imploring them to push for the resuscitation of intra-Afghan peace talks. He wants the United Nations to make clear that joining its ranks is not only about "holding a country under the barrels of your guns and having enough population taken hostage."

Meanwhile, Qatar has urged countries not to boycott  the Taliban, and Pakistan called on nations to avoid isolating the Taliban, and to incentivize them to hold to their promises of renouncing terrorism and being inclusive.

During the Taliban's repressive time in power in the late 1990's, only Pakistan, Saudi Arabia and the United Arab Emirates recognized their legitimacy. During that era, the U.N. refused to recognize their government and gave Afghanistan's seat to the previous, warlord-dominated government.

The group was then ousted from power in 2001 by a U.S.-led coalition after the 9/11 attacks for harboring al-Qaida.

The United States, which withdrew all its forces from the country last month in a chaotic airlift that ended America's "forever war," says it is critical that the international community remains united in ensuring the Taliban meets a range of commitments before granting legitimacy or support beyond humanitarian aid.

Secretary of State Antony Blinken said this is the message he delivered to the U.N. Security Council and others on the sidelines of the General Assembly this week.

The U.S. has "significant leverage when it comes to the Taliban," State Department spokesman Ned Price told reporters Friday. "But we have all the more leverage when we work in coordination and in harmony with our allies and partners around the globe," he added.

Medhora, of the Center for International Governance Innovation, said the U.N. has levers it can use through its various agencies, such as UNICEF, which focuses on children, UNHCR, which assists refugees, and the World Food Program, all "where the actual work of the U.N. gets done." This is another area where the United States has major sway as the the largest donor to the United Nations, contributing nearly one-fifth of funding for the body's collective budget in 2019, according to the Council on Foreign Relations.

In multiple U.N. speeches this past week, a number of world leaders mentioned Afghanistan, including U.S. President Joe Biden and Afghanistan's neighbors, such as Pakistan, Iran and Uzbekistan.

Enayat Najafizada, who runs an independent think tank in Kabul that monitors security issues in Afghanistan's provinces, said the U.N. should also facilitate negotiations between Afghan groups and bring the various countries with a history of meddling in the nation on board for the sake of regional security.

"Without forming an inclusive government, the country will move to a civil war," said Najafizada, founder of The Institute of War and Peace Studies.

Although what comes next for Afghanistan is far from certain, it is clear the Taliban do not want to be seen as global pariahs, said Kamal Alam, nonresident senior fellow at the Atlantic Council.

"They want a seat at the U.N. They want to go to Davos. They like the private jet lifestyle," he said, referring to the group's political elite who reside in exile in Qatar.

"But that's only the political leaders. The foot soldiers on the ground, there's no such thing as 'the new Taliban'," he said. "There is no new Taliban. Everything they're doing is a tactic to get recognition as well as not be isolated."

AP journalists Matthew Lee and Kathy Gannon contributed to this report. Dubai-based AP correspondent Aya Batrawy has covered the U.N. General Assembly since 2019. Follow her on Twitter at http://twitter.com/ayaelb