Muscatine School Board on Friday voted 6-1 in favor of requiring students and staff to wear face masks, a decision some parents aren't happy with. 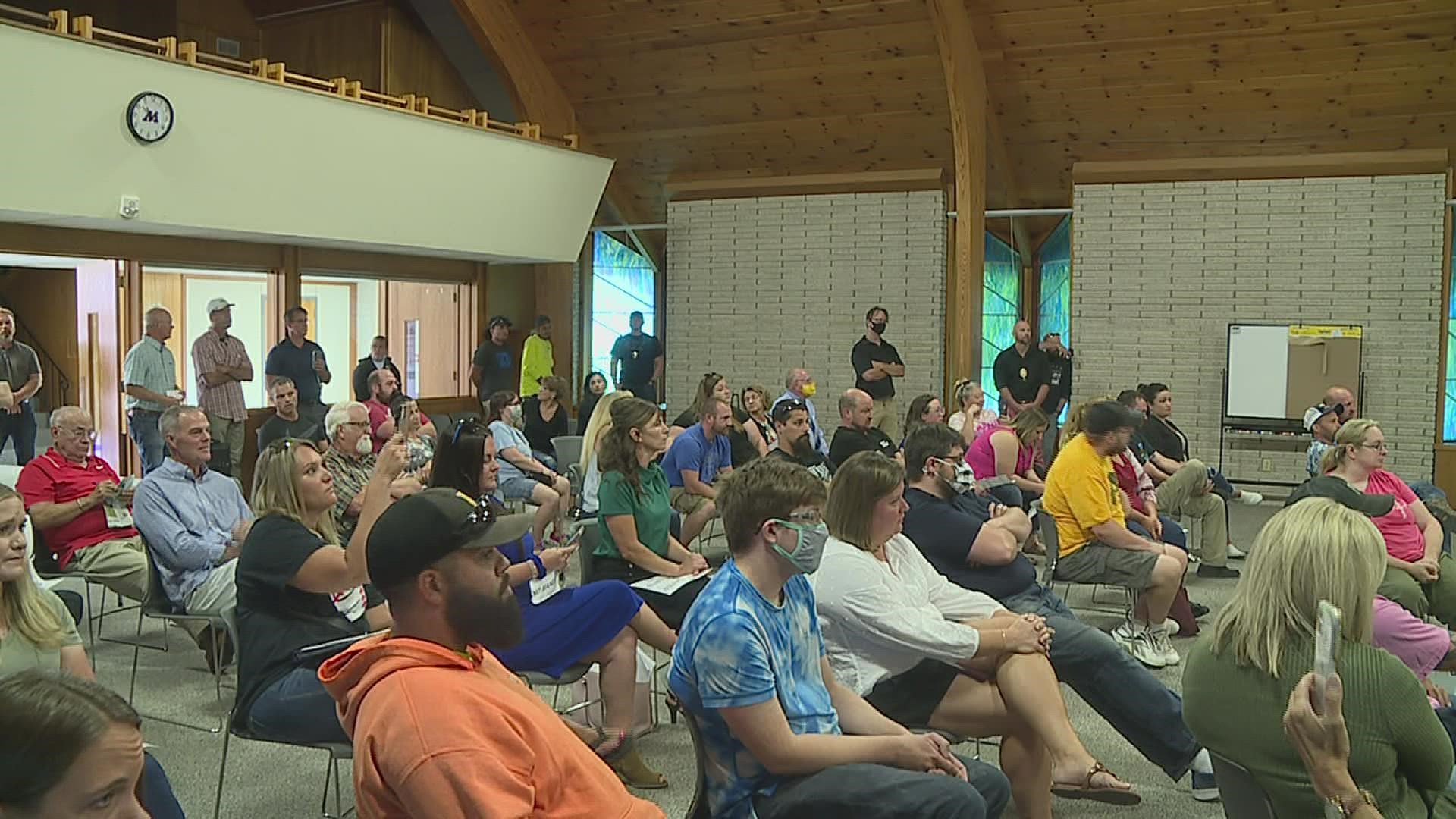 MUSCATINE, Iowa — The Muscatine School Board, during a special meeting 10 a.m. Friday, Sept. 17, voted 6-1 in favor of requiring students and staff in Pre-K through 6th grade to wear face masks in its schools. The mask mandate will take effect Wednesday, Sept. 22.

This comes after a federal judge ruled that schools in Iowa can require students and staff to wear masks in the classroom.

Over 1,000 people submitted comments on the issue in an online form the Muscatine School District had sent out Wednesday, Sept. 15, and dozens came to speak at the meeting.

The school board limited public comment to 30 minutes and each person was only given two minutes to speak. During the school board's own discussion, frustrations and tensions boiling over with parents shouting at the board members calling them "cowards." The board had to continually pause to ask parents to remain quiet, with some being told to leave and escorted out by police. Over an hour into the meeting, the board called a recess and said they would return to vote once everyone had calmed down.

The majority of the parents at Friday's meeting said they want the decision to mask their children to be their own choice and the district's.

"It is your job to advocate for all the children in the district and you cannot do that with a one size fits all mandate," parent Taran Greenfield said. "Leave the decision to the parents."

Some bringing up the argument that kids need to be able to see their teachers or peers smile.

"Kids not being able to see emotions on people's faces is nothing but a psychological nightmare," parent Keith Duncombe said. "Without freedom of expression there is oppression."

While others said not seeing faces can make it difficult for students to learn.

"I used to be an early childhood education educator and kids, especially young kids, learn a lot just from the face," Sonia Baker said. "How to form letter sounds, reading, hearing words articulated and facial expression, speech formation are huge with young kids, and masking makes it a real challenge."

Parent Rachel Roeth spoke about this as well, and again, pointed to the choice that parents can make.

"Anyone concerned can get a vaccine or, if not able yet, can wear a surgical, tight mask, properly," Roeth said. "Those concerned are still free to do whatever is best for them or their child."

A substitute teacher spoke at the meeting.

"The district is really hardened for subs right now," Tom Randleman said. "I can tell you right now I'm going to be doing a long term sub at Jefferson, but if I have to wear a mask, I won't sub. Period."

Only three people at the meeting spoke in favor of masks, including a previous board member, Randy Naber.

Parent Scott Long pointed out the studies that show masks can reduce the transmission of COVID-19. He said it's about more than just keeping the kids safe and healthy.

"The potential loss of a caregiver or other family member would be absolutely devastating for the mental health of a child," Long said.

Many in attendance criticized the school board.

"You are considering putting a mask on my child for a bureaucratic safety blanket," parent Emily Thomas said. "It's a disgrace. You should be ashamed of yourselves, and I really hope you consider the alternative."

One criticism was that this decision was happening too fast.

"Mr. [Clint] Christopher is trying to control how much time the public is given to address this issue and move as quickly as possible to mandate masks," parent Matt Miller said. "Even by scheduling this meeting at 10 a.m. while most parents are working."

Parents claimed the board had already made up their minds' and weren't actually listening to what they had to say. Board members denied that, and added that they read every online comment.

The mask mandate, according to the school board, will remain in effect until vaccines are available for that age group of students. Many parents at the meeting said they do not plan to comply with the mandate, nor will they vaccinate their children when it's available. 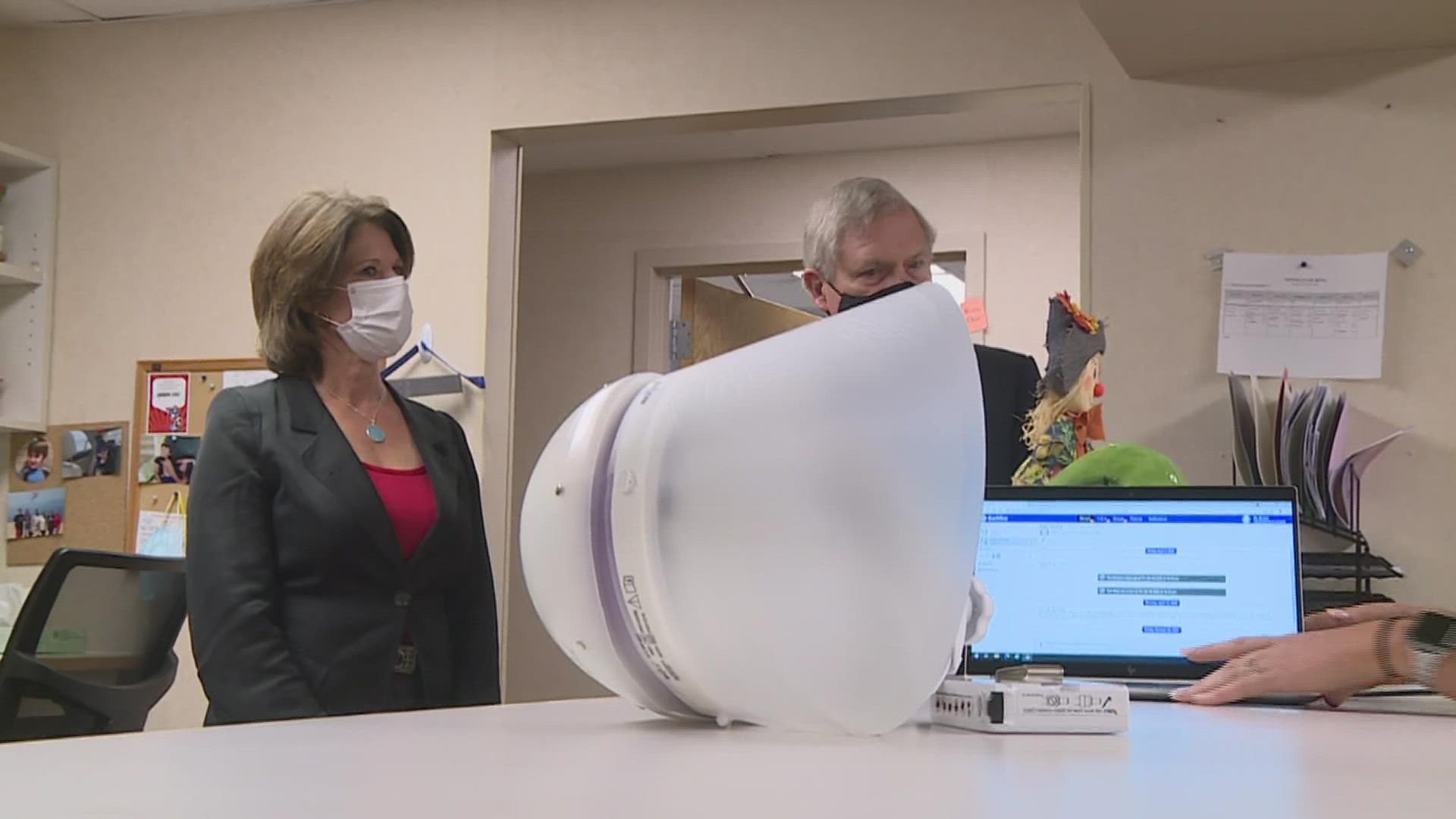