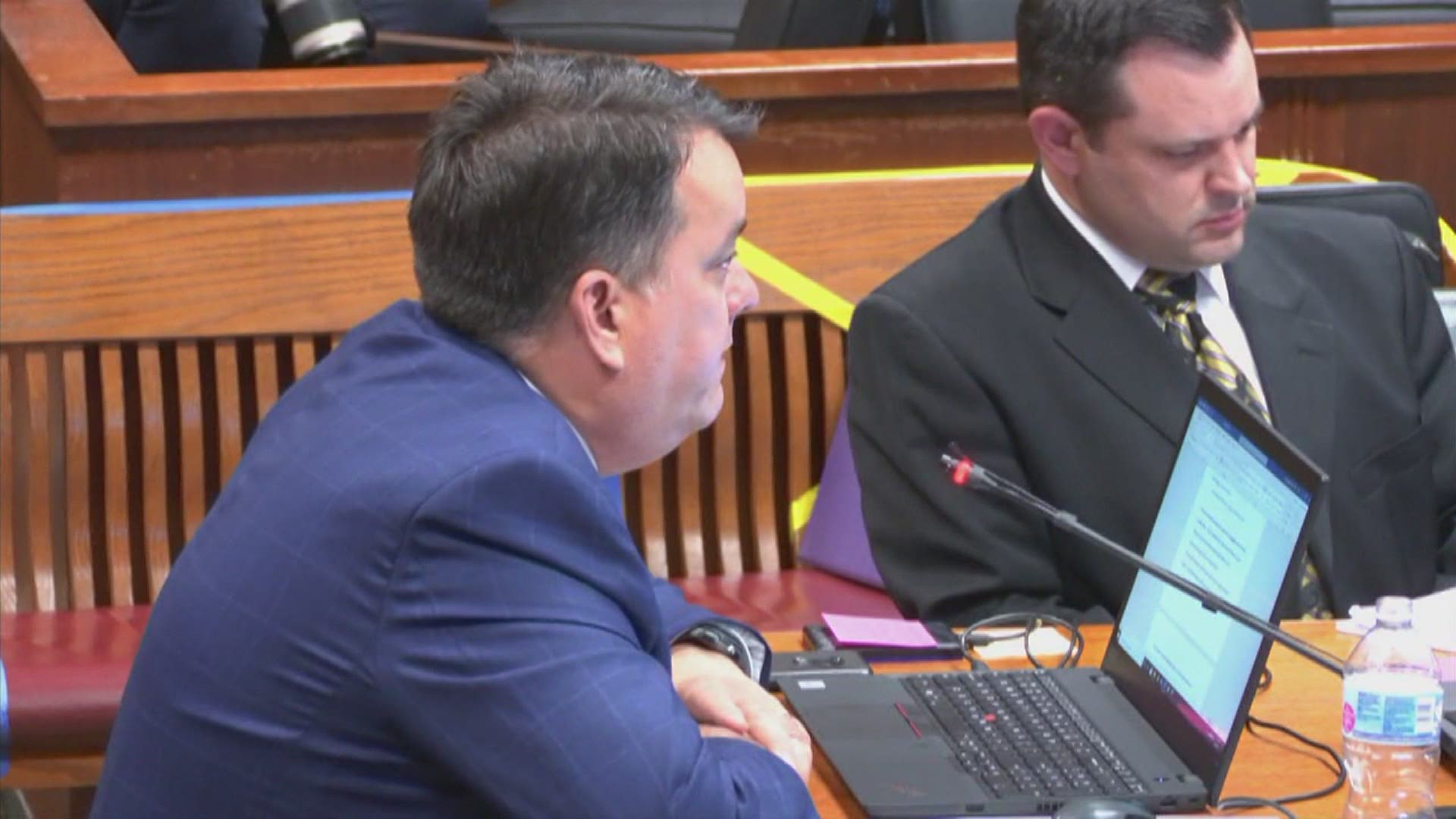 DAVENPORT, Iowa — EDITOR'S NOTE: Some of the images and video depicted in testimony may be graphic in nature.

Prosecutors rested their case Monday in the murder trial of Cristhian Bahena Rivera following testimony from the State Medical Examiner and a forensic anthropologist who talked about the condition Mollie Tibbetts' body was in when she was found in an Iowa cornfield in August 2018.

The state rested Monday afternoon before Judge Joel Yates denied a motion from the defense to acquit Bahena Rivera of the murder charge.

The defense is expected to make its argument Tuesday morning.

Trent Vileta, the lead investigator in the case and an agent with the Iowa Division of Criminal Investigation, testified only Bahena Rivera gave law enforcement the amount of information that warranted and arrested and a murder charge.

Assistant Attorney General Scott Brown: "Any of the other men that you interviewed at all give you that type of information?"

Brown: "One person in this case is that right?"

Brown: "That person is seated to my right Cristhian Rivera. Would you agree?"

The defense named several other people who lived around Brooklyn or were seen in town around the time of Tibbetts' disappearance, asking Vileta why they weren't considered suspects.

Defense attorney Chad Frese: "You didn't find it a bit ironic that this man you'd received two tips on, the body was found a quarter-mile from his house."

Agent Kevin Horan with the FBI told the jury how they used Tibbetts' cell phone data to show her phone moving at a constant pace while running before it picked up speed and turned off once she disappeared.

"There's a pointy end towards the top and a slightly squared-off component on the bottom," Klein said. "This is consistent with a knife."

Scroll down to see real-time updates from the courtroom

On Friday, a former police officer who interviewed the suspect in Mollie Tibbetts' killing, and an Iowa Division of Criminal Investigation criminalist who examined blood on a vehicle central to the state's case.

The jury was also shown video from an interview with Pamela Romero, a former Iowa City police officer, and Bahena Rivera. The video showed Bahena Rivera appearing to put his head down and fall asleep.

Romero maintained he was "very active" in conversation.

"He was tired, everybody was tired," she said. "But I was not able to see that he was really, really tired."

The next day, she traveled back to Poweshiek County to a cornfield where Tibbetts' body was located.

"The screening tests indicated the presence of blood on those swabs, and the DNA profile that I developed matched the known DNA profile of Mollie Tibbetts," she said.

On cross-examination, Scott said there was a mixture of three people's DNA total in the trunk: Tibbetts and two others.

"I can neither include or exclude [Bahena Rivera]," she testified of the other two pieces of DNA.

The State of Iowa rests its case, and the court goes into recess until the next morning.

Judge Joel Yates denies a motion for acquittal. Jennifer Frese had argued the prosecution did not meet the legal requirements to prove Murder in the First Degree or Murder in the Second Degree.

The state completes its questioning and the judge calls the defense for cross-examination. The defense has no questions for Garvin.

Summarizing, Garvin testifies that she found a minimum of seven knife impacts on the bones she analyzed.

The state asks how many slashes may have created the wounds on the rib bones, and Garvin maintains her answer a minimum of one.

More photos of damaged ribs are shown by the prosecution, and Garvin points out similar sharp wound defects and a trailing cut consistent with knife slashing.

The state asks how many knife slashes would have created the multiple lines of wounds, Garvin answers it would be a minimum of one.

The state transitions to a picture of one of Tibbetts' ribs. Garvin points out multiple linear sharp force defects on the bone consistent with knife wounds.

The state calls a photo of the same vertebrae, showing another wound that Garvin says aligns with the wounds on the right side of the previous image.

Looking at defects on the right side of the bone, Garvin testifies that the different nature of the wounds on each side of the bone suggests multiple slashes with the blade.

The state calls a picture of a neck vertebrae. Garvin points out four sharp force defects in the left side of the bone, which align in such a way that they could have all been created by one incision.

The state points out a sharp force defect on the right side of the skull, and Garvin says that the shape and nature of the wound suggests it was created by a single-edged blade.

The state calls up a photo of Tibbetts' skeleton. The prosecution asks why certain bones, such as some toe bones, were missing, and Garvin responds they were likely missing at the scene and couldn't be recovered.

Garvin began examining Tibbetts' body on August 23 in a process she says took about 20 hours.

Garvin was brought onto the case on August 21st, prior to Tibbett's autopsy on the 22nd.

Questioning resumes, with new witness Dr. Heather Garvin, a forensic anthropologist, being called to the stand by the prosecution.

The court is on a 10-minute recess.

The defense is now cross-examining the witness.

Dr. Klein confirmed the autopsy was unable to determine the size of the assailant, nor which direction the stab wounds were coming from during the attack.

Dr. Klein says he determined homicide was the manner of Mollie Tibbetts' death.

Dr. Klein is now describing a cut wound that was found on the back of Mollie's hand.

Dr. Klein explained earlier that part of the process of an autopsy is observing the clothing. The State is questioning Dr. Klein on the findings from Mollie's clothes.

Dr. Klein showing the "defects" or cuts to the sports bra Mollie was wearing - shown by the arrows on the photo. They go through the front and back of the fabric. @wqad #mollietibbetts pic.twitter.com/iwZ8PEXCcW

"(The injuries) are consistent with a sharp force injury, could be from stabbing, or a large slash," said Dr. Klein.

Examination of her head wounds show a sharp force injury that penetrated through her skull. @wqad #mollietibbetts

Dr. Klein explained part of the autopsy process includes taking X-rays of the body to determine if there are any other fragments or materials within the body that would help determine the cause of death.

He says they did not find anything significant in the X-rays.

Dr. Klein performed the autopsy on Mollie Tibbetts. Says her body was severely decomposed, exposing some of her skeleton. Showing photos to the jury of "sharp force injuries". @wqad #mollietibbetts

Dr. Klein says went out to the cornfield where Mollie's body was found on August 21.

He and his team recovered her body and brought it back for evaluation at their facility in Ankeny, Iowa.

Dr. Klein is talking about forensic autopsies. He says the main goal is to identify who died and determine the cause and manner of death. He says there are five categories when it comes to manner of death: Natural, accident, suicide, homicide and undetermined.

The state calls its next witness, Dr. Dennis Klein, the state medical examiner. Part of his job is providing autopsy services for about 80% of the state.

The defense has begun their cross-examination with Agent Horan. He's asking whether agents were able to get a heart-rate reading from the FitBit Mollie was wearing.

Agent Horan said he believed that was looked into, but he doesn't know what the results were because he wasn't part of the discussion.

Witness may step down.

Agent Horan pulled Mollie's cell phone data. He's showing how it works with this diagram, how the phone is moving east from 8:15-8:28pm away from Brooklyn, Iowa @wqad #mollietibbetts pic.twitter.com/vI5IS0oia0

Also has Mollie's FitBit records, connected to her phone. FitBit didn't have her current route, because she never completed it. So he compared this data to other routes in her history. @wqad #mollietibbetts pic.twitter.com/2PDmYLI93B

Vileta steps down from the stand.

Prosecutor Scott Brown asks Vileta about who knew where Tibbetts' body was found, and other details of the case. Vileta responds it was all Bahena Rivera.

Vileta back on the stand, testifies there is no record of Dalton Jack being in Brooklyn the night Mollie Tibbetts disappeared. Also says none of the other people questioned were connected to the black Chevy Malibu seen on surveillance footage.

"Cristhian Rivera is the only one who told us that," Vileta says when asked who gave information about Tibbetts being in the trunk of their car.

Court goes into a 10-minute recess.

Chad Frese is asking Vileta about interviewing Bahena Rivera, how it was that Pamela Romero was brought in to speak to Bahena Rivera in Spanish.

"The initial interview was Jeff Fink and Pamela Romero," Vileta testifies. He says Bahena Rivera "became engaged" with Romero during the interivew.

"As long as he's engaged with her and talking to her, we were still able to manage the interview similarly."

Defense now questioning why an officer with limited experience was asked to interview Bahena Rivera. Officer Pamela Romero had 2 years on the job, 16 hours of interview training. Agent Vileta says Rivera was engaged with her. @wqad #mollietibbetts

When asked about a man who lived where Mollie Tibbetts' body was found, Vileta testifies: "I think Cristhian Rivera cleared [him]."

Defense attorney Chad Frese says a tip was made about the man being violent with women and children.

Defense going after Agent Vileta for never interviewing a neighbor (R.P.) whose house is located less than a quarter mile from the place where Mollie's body was found. Only did a walk-thru of his house. "Cristhian Rivera cleared him." @wqad #mollietibbetts

Defense is questioning Agent Vileta about Dalton Jack, reports of his temper and relationship status with Mollie. Vileta says Dalton was cleared as a suspect. @wqad #mollietibbetts

Court goes on a 10-minute break.

"I don't recall exactly why I could get I could only speculate as to why he did that," Vileta says when asked why Dalton Jack didn't tell police about him having a relationship with someone other than Mollie.

Agent Vileta describes the effort to find Mollie's phone and FitBit. Those items were never recovered. A device dog was even called in to sniff out these electronics, but no luck. Murder weapon never found in this investigation either.

It shows a runner, presumed to be Mollie, and the black malibu that led them to Bahena Rivera.

Agent Vileta testifies even though others were questioned and a "deep dive" was conducted in the case, nobody was labeled a suspect.

Agent Vileta says information they got from Dalton Jack (Mollie's boyfriend) ruled him out as a suspect. He was in Dubuque for work, and no one reported seeing him in Brooklyn at the time of Mollie's disappearance. 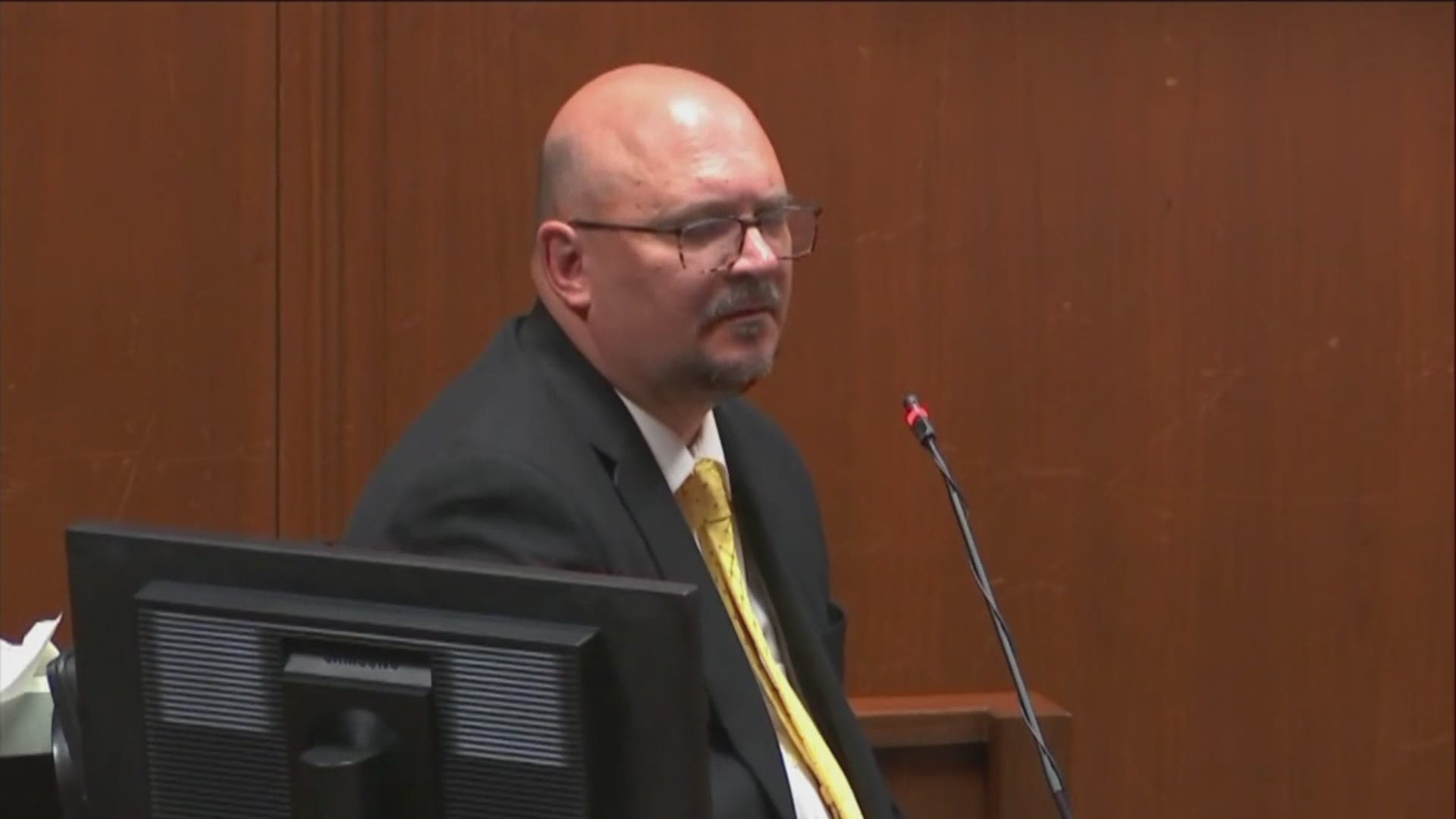 Court goes on a 10-minute break to troubleshoot the courtroom's sound system. Some jurors are having issues hearing the questions and/or testimony.

Agent Vileta first called to Brooklyn when Mollie disappeared, investigating the missing persons report. Describes her as extremely low risk, in terms of lifestyle of becoming a victim.

"We had a hard time finding something negative about Mollie Tibbetts." 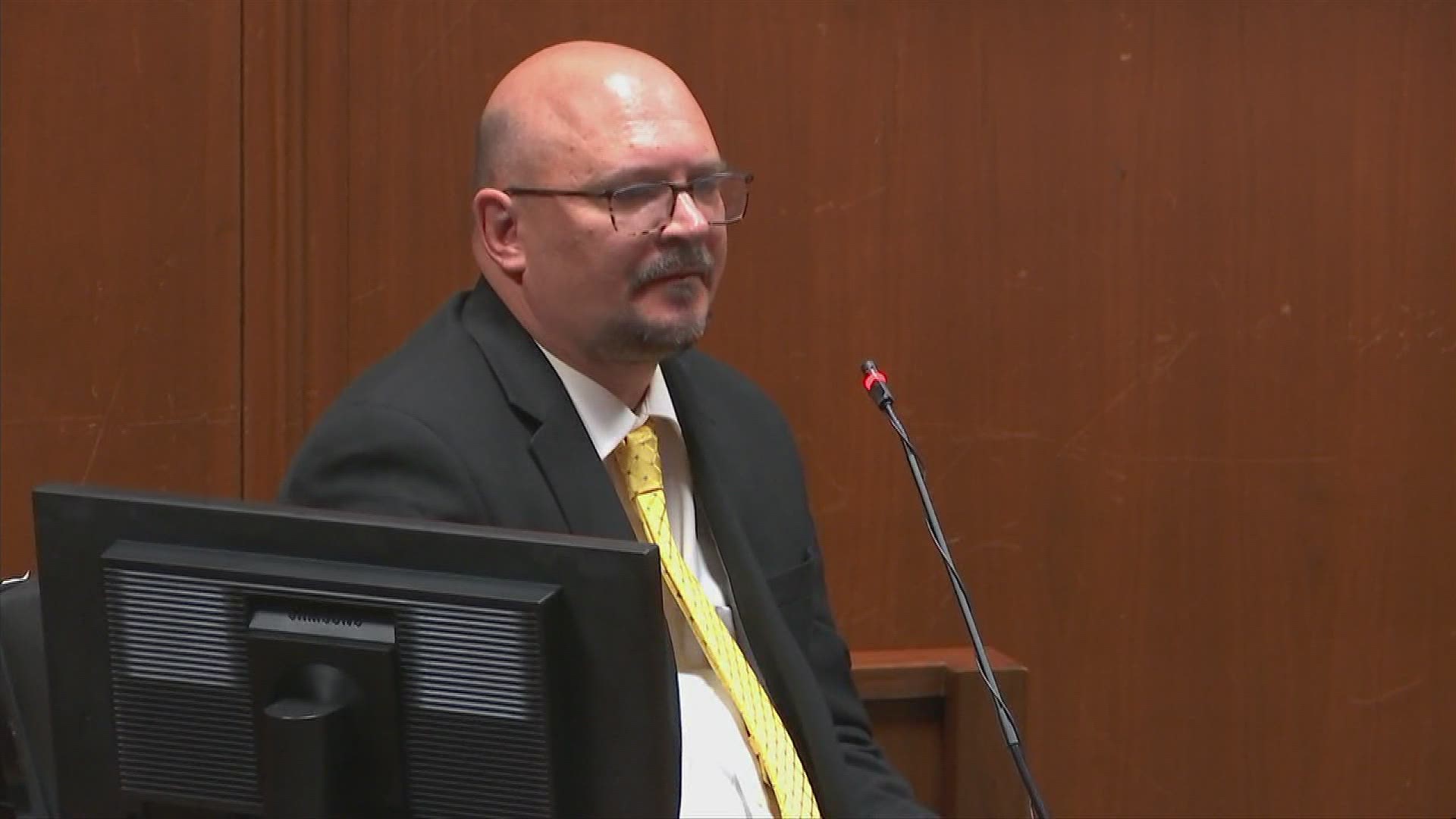 First on the stand is DCI Agent Trent Vileta.

RELATED: Here's who has testified in the Cristhian Bahena Rivera murder trial so far