The Quad Cities could get a national park and bison bridge... on I-80

A local environmental group is proposing repurposing the bridge, once a new one is built, into a bison and pedestrian crossing. 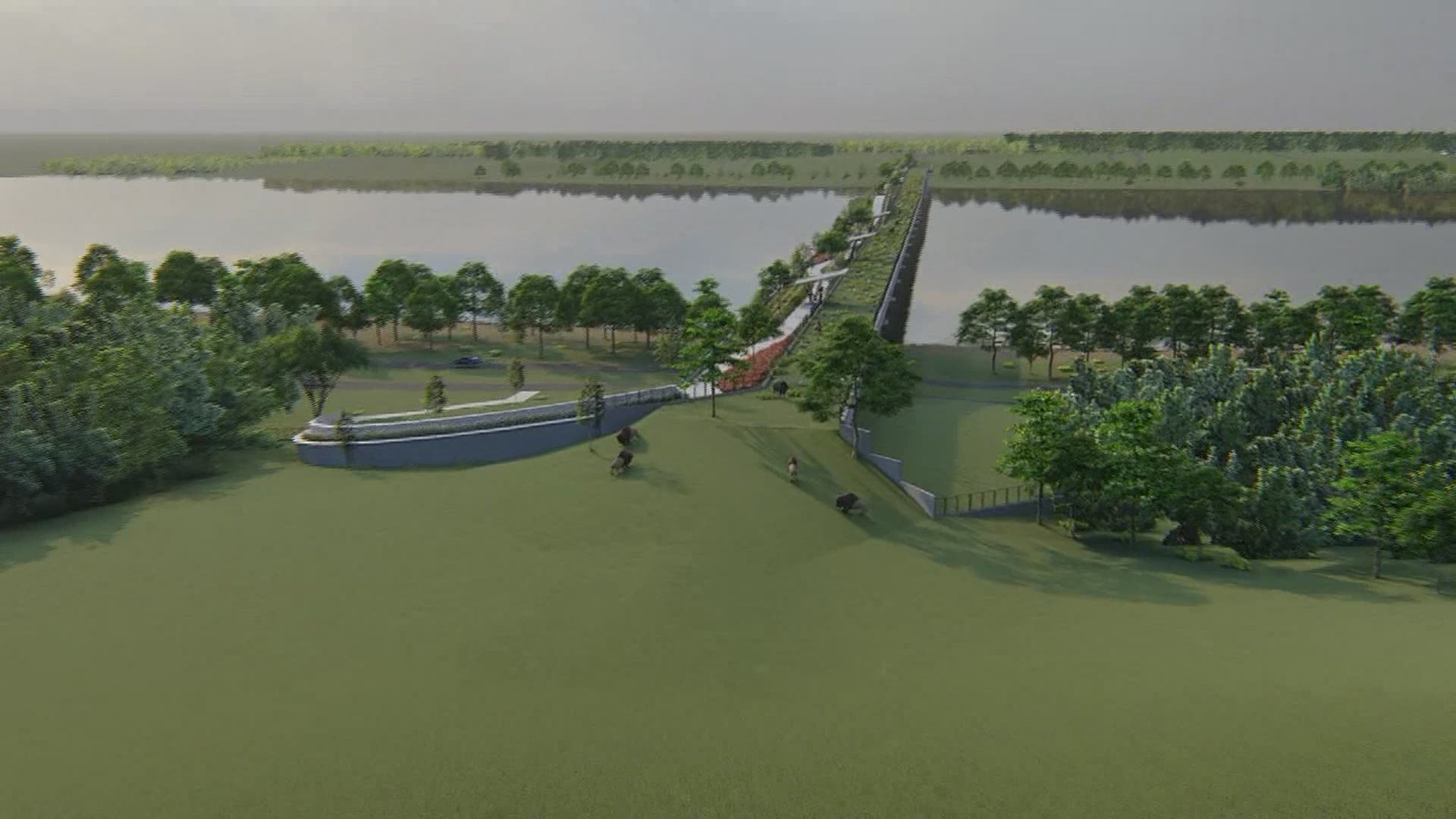 LE CLAIRE, Iowa — The Quad Cities could become home to the first national park in either Iowa or Illinois, as well as a whole lotta bison.

On Thursday, Quad Cities native, environmentalist, and president of Living Lands & Waters, Chad Pregracke, announced a new project, that would repurpose the I-80 bridge between Le Claire, Iowa and Rapids City, Illinois.

The current bridge is 55 years old, and the Illinois Department of Transportation is looking to build a new one somewhere along the river. Typically, they would destroy the old bridge once finished, but Pregracke has other plans.

He's created the Bison Bridge Foundation, and is proposing keeping the bridge, and transforming it into the world's longest wildlife crossing. One side would be for pedestrians and the other would be for bison to walk on.

"When I heard they were gonna make a new bridge, I was just driving over the bridge one day and I'm like, what if this was a grazing ground and bison could graze from Illinois over to Iowa and back," said Pregracke.

But the benefits, he says, go further than a place for the buffalo to walk on.

The areas on both sides of the bridge would hopefully be turned into a national park - something neither Iowa nor Illinois currently have. There's even talks of turning the current rest stop near the bridge over to the project as well.

"It'll help put this area on the map in so many ways," said Pregracke. "This isn't just about the Quad Cities. It's about the country as well, and adding another national park."

At a press conference on Friday, Pregracke made it clear that this is still in the early planning stages, and no formal projects have been announced. Instead, it's in the proposal stage, and the foundation is seeking signatures from the public before officially approaching lawmakers.

"We're looking for 50,000 and that's just to show [Illinois Department of Transportation] and the federal government that people in this area really like the opportunity that would present itself," he said.

Project manager Kevin Marchek spent decades with Illinois' Department of Transportation, and upon retirement, was recruited onto the Bison Bridge Foundation's team.

He says if the old bridge is repurposed instead of destroyed, it could potentially save taxpayers millions of dollars.

RELATED: Who are Moline's mayoral candidates? We sat down with both

"Keeping the old bridge will obviously save demolition costs. It costs money to tear down a bridge, so we would save potentially millions of dollars there," said Marchek.

He estimated it could be about seven years before a new I-80 bridge is completed and traffic is moved.

This has already been a project two years in the making, and partners from across the country have hopped on board - from bison experts in Wyoming, to Niabi Zoo in Coal Valley.

Now, the Quad Cities Chamber and Visit Quad Cities have both announced their support, saying the economic and environmental benefits of the bison bridge would uplift the entire area.

"The Mississippi River is our number one asset when it comes to tourism in the Quad Cities and this particular concept and idea matches our tourism masterplan," said Visit Quad Cities' Lynn Hunt. "If we’re going to compete as a destination – not only for visitors, but for economic development in the future - we need this iconic piece that will draw people; that will identify us as the Quad Cities instead of just traveling through."

She says the QC area sees about 1.6 million visitors a year, and estimates a national park could quadruple that number in just the first year.

"$92 million was spent between Scott County and Rock Island County in 2019 in non-resident spend," said Hunt. "So visitors, generating about $15 million in overall sales tax."

And all of that extra money would bring a huge boost to local hotels and restaurants, with potential for future investors and developers, she added.