Fact Check: What you need to know about the ad linking Joni Ernst to privatizing Social Security

“Talked” is a 30-second commercial that targets Republican Joni Ernst and primarily deals with Social Security. 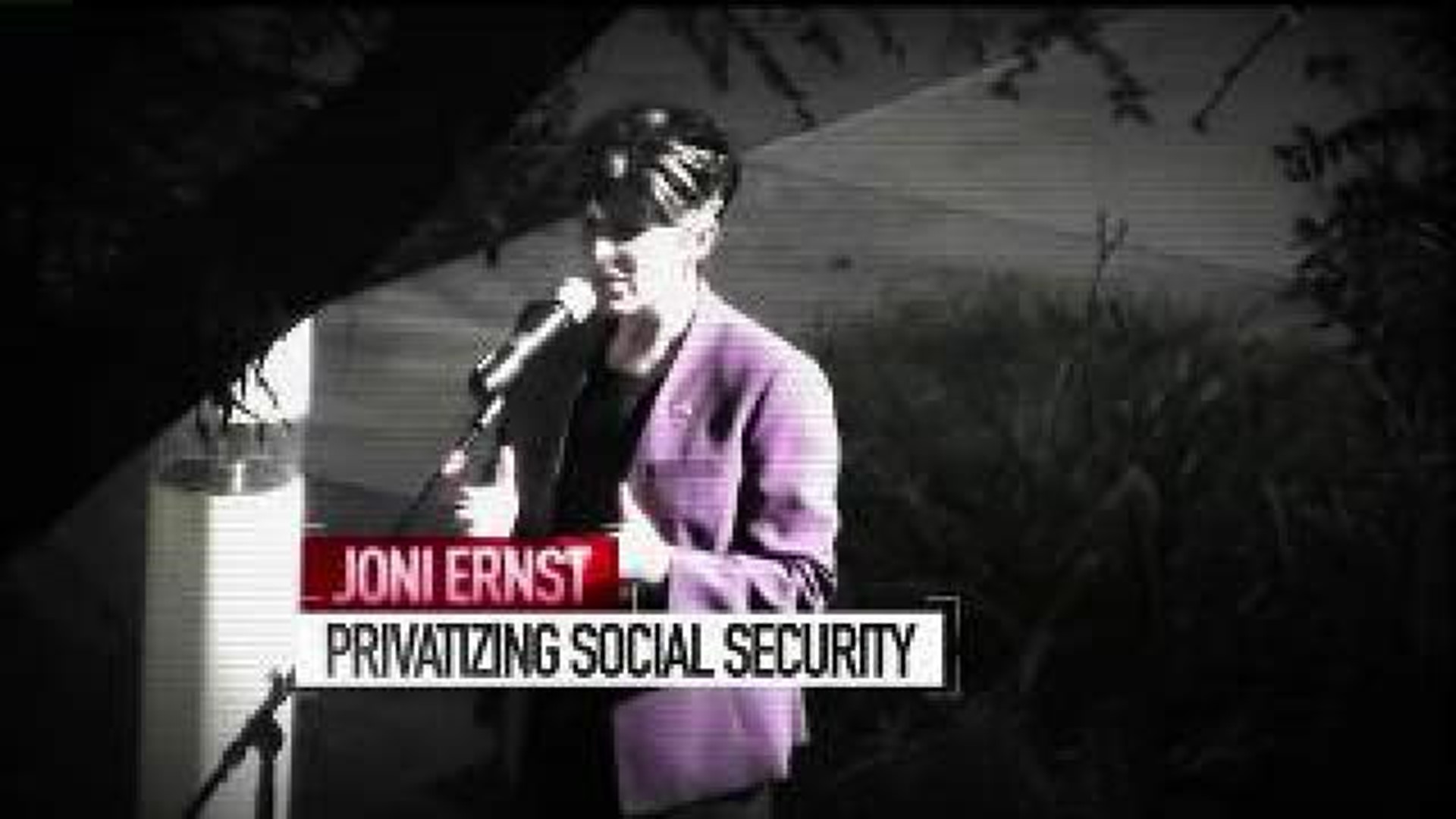 The Ad: “Talked” is a 30-second commercial being aired by the Democratic Senatorial Campaign Committee, the party's political arm in the U.S. Senate. It targets Republican Joni Ernst and primarily deals with Social Security.

The Claim: The ad claims that Ernst is talking about “privatizing” Social Security, “risking it on the stock market.” It then quotes her at an event this month in which she says, “Yes, I have talked about privatizing Social Security.” The ad then goes on to say the Koch brothers have “spent millions trying to privatize Social Security” and “millions more” trying to elect Ernst.

What you Need to Know: Ernst made the statement that’s attributed to her at a senior citizen event in Des Moines on Sept. 3. And she did say that she’s talked about “privatizing” Social Security. But what the ad didn’t include was her full statement. “Yes, I have talked about privatizing Social Security - as an option. Again, that is one solution. So what I'd recommend is we look at a number of solutions because we really don't know which way is the best way to go yet.”

During the primary, Ernst mentioned individual accounts, but just for younger workers. She did not say definitively she’d support it, though she said something must be done with the system.

At issue are projections about Social Security’s long-term solvency. Earlier this year, the program’s trustees said its trust fund would run out of money in 2034, after which 75 percent of scheduled benefits would be paid to retirees.

The last time the structure of the Social Security was front and center in the national debate was 2005, when President Bush proposed allowing people under the age of 55 the option of diverting some of their payroll taxes into a private account. Currently, employees pay 6.2 percent of their salaries (up to $117,000) into Social Security, with employers paying a matching amount.

Proponents said it would pay higher returns than the current system and the account would be something the beneficiary owns. Critics, though, contended that diverting funds would be risking them in the stock market, and that a way would have to be found to replace those diverted funds to ensure adequate cash flow to pay current retirees.

Republicans claim ads like the one targeted at Ernst are aimed at scaring seniors. Ernst has said several times the country needs to “keep our promises to seniors," who she's said include her parents.

As for the claims about the industrialists Charles and David Koch – and the implication that Ernst will do their bidding if elected -- the Americans for Prosperity Foundation, which is one group that receives Koch funding has supported private accounts. And Koch-funded groups have backed Ernst’s Senate effort -- mostly by criticizing Democrat Bruce Braley, Ernst's opponent. But just as voters must decide whether Braley will be beholden to billionaire Tom Steyer (whose group, NextGen Climate Action has weighed in on his behalf in this Senate race), they also must decide whether the help of Koch brothers-funded groups will affect her independence.

Fact Check: What you need to know about the ad linking Joni Ernst to privatizing Social Security