In just one year, 2,144 people have died of drug overdose in Illinois and Iowa combined. That’s more than the entire population here in Prophetstown, Illi... 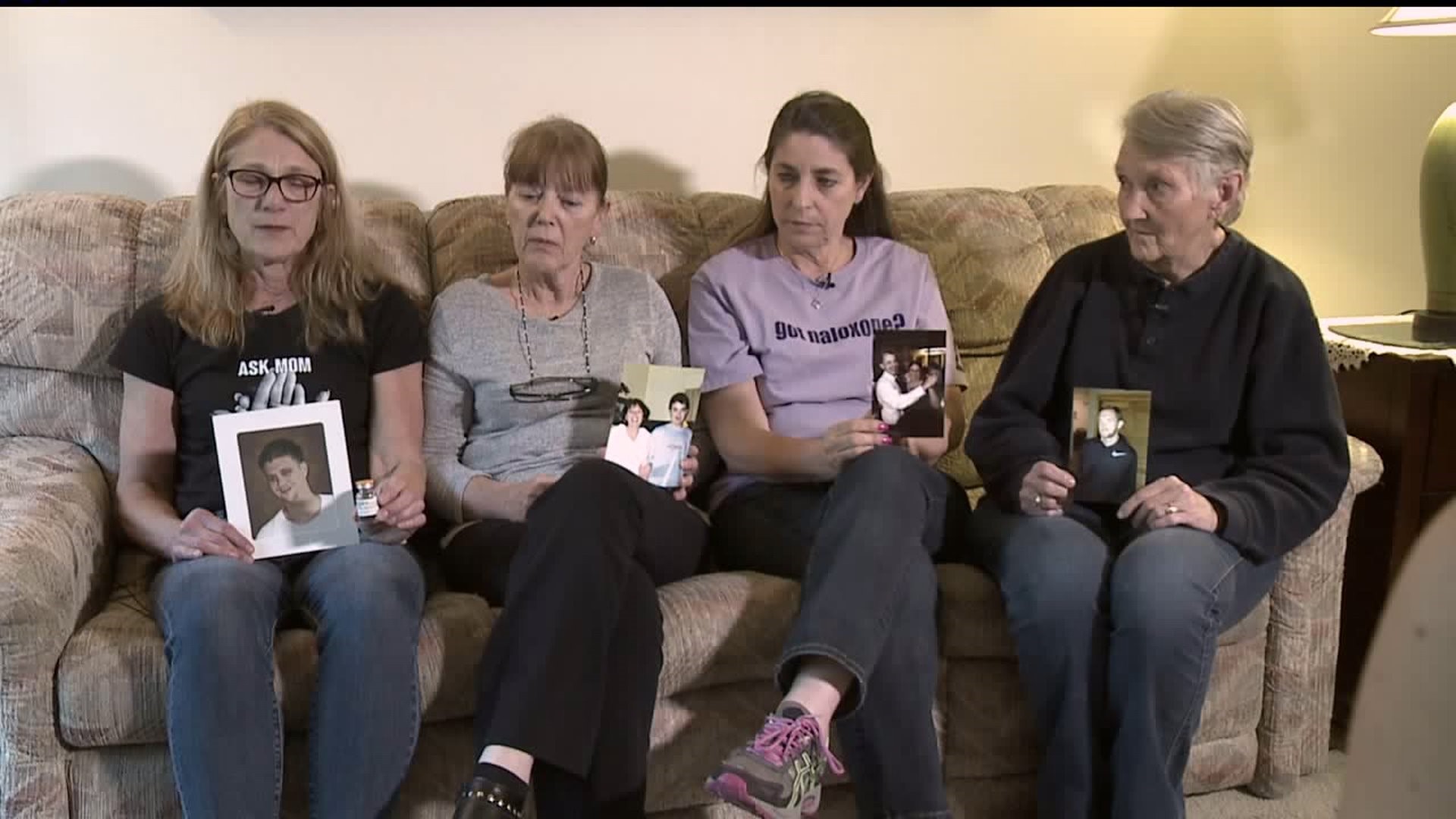 DAVENPORT-- These four mothers have something in common they wish they didn't. These mothers, all of them, outlived their sons.

Andy died of a heroine overdose, as did Benjamin.

Jacob died from an alcohol and xanax overdose. Justin died from overdosing on fentanyl.

And now their mothers live to tell their stories.

Justin was diagnosed with a list of mental health issues when he was seven. His grandmother was more like a mother to him.

"He was a sweet young boy, he was very sweet," says Jacob's mother Patty.

That's the way it was, until they both started relying on illegal drugs to deal with their internal pain.

They were trying to exist in a world they no longer understood, until the days their mom's got the phone call.

"It was just a heart wrenching day," says Linda.

Linda's came from her granddaughter Ashley.

"She was just hysterical. She blurted out, grandma, Justin's dead. And I just started screaming," remembers Linda.

Justin was found in a home that wasn't his, passed out dead with a needle next to him.

"Once he shot up, he probably just dozed off and then was out of it," says Linda.

Jacob was also found in a Davenport house where he didn't belong.

"They thought he was sleeping. A couple of hour later, they realized he hadn't moved, and he was dead," says Patty. "It's almost surreal. You never think that you'll go through something like that or that your son, your child would have these issues," says Patty.

But in reality thousands do every year.

In just one year, 2,144 people have died of drug overdose in Illinois and Iowa combined. That's more than the entire population here in Prophetstown, Illinois, and that number is on the rise.

"In the last five years, we've seen an uptick in the numbers. In the last two or three years, it's grown exponentially," says Davenport EMS leader Chuck Gipson.

There are at least three overdose calls a day in Davenport. The drug Naloxone, or Narcan reverses the deadly effects.

"I've had a couple of those calls, and you go wow, you were dead a few minutes ago, and now you are not dead," says Gipson.

One overdose requires one milligram of Naloxone to reverse, until just last month.

"We actually just changed our protocol to double the amount we're giving to patients because this is a growing problem," says Gipson.

It's growing in size and potency. And if it's ignored, these mothers will have to make more room on this couch.

"This is an opioid crisis," says Linda.

The first step to stopping it is recognizing addiction is a real problem affecting real people.

"Nobody wakes up one day and says, when I grow up, I want to be addicted to drugs, he would never choose addiction for his worst enemy," says Benjamin's mom Sue.

"I know he was self medicating, he felt bad. But somewhere along the line, I'd like people to remember that he was a human being. He's not a throw away person. He was a good dad," says Sue.

They were real people who left others behind.

"She loves him to death now. She can't wait until we see him in heaven," says Linda.

And Benjamin left behind his sister Katie, who used to be a heroine addict too. She got professional help, and now she is five years sober.

The next step is treatment.

It's something these moms say we need to do better. But until then they're left finding new meaning in life for the ones they love who can't.

"His struggles meant something, and so did his life," says Patty.

If you or anyone you know is struggling with addiction, here are some resources we have in the community: