Wild video taken by a journalist in the Bahamas shows a family trying to escape chest-high water, carrying their dogs as they seek higher ground. 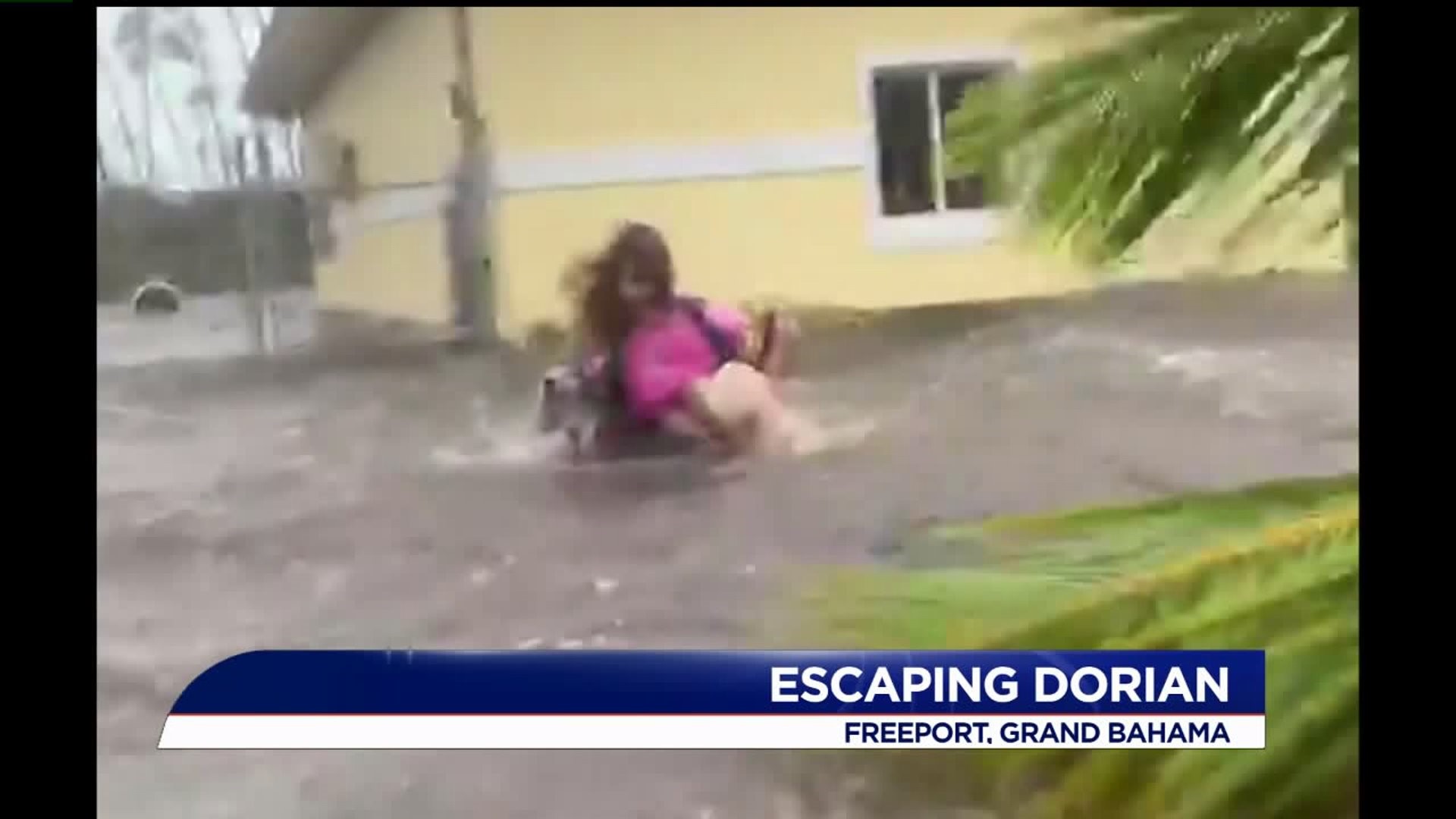 (CNN) -- Miles of debris from houses smashed apart by Hurricane Dorian stretched Tuesday across the landscape of the Bahamas' Great Abaco Island as the deadly storm left behind a paradise obliterated.

Dorian was still punishing northern parts of the Bahamas more than a day after landfall. The hurricane — now a Category 2 storm with maximum sustained winds of 110 mph — was crawling to the northwest, where it is expected to move along the east coast of Florida and to the Carolinas later in the week.

Related: Millions face evacuation orders from Florida to South Carolina — and the decision to stay or go

On Great Abaco, high winds remained but the rain had subsided as residents emerged to gasp at the incredible devastation. Huge piles of rubble were what remained of businesses and homes wrecked by the strongest storm to hit the islands, new aerial video shows.

It's difficult to tell whether one scene shows a neighborhood or an industrial center. The ruin was immense; the area had been turned into what looked from above like a floating landfill. Shipping containers were tossed among the rubble.

Brandon Clement, who was in a helicopter over the area, told CNN that even new homes constructed under more stringent building codes were destroyed by the storm.

The storm's death toll, which officials fear will rise sharply, stood at five people, according to authorities.

On Grand Bahama Island, residents of Freeport were fervently working Tuesday to rescue people in communities where the havoc wreaked by Dorian was much worse than expected.

With streets almost impassible due to high water and stranded vehicles and with pounding rain still falling and tropical storm force winds blowing, residents put together an ad hoc rescue group with boats and personal watercraft.

The rescue efforts are dangerous and harrowing, according to a CNN crew that watched rescued Bahamians brought to a bridge half-covered by water that was being used as a staging point.

The CNN crew tried to drive around Grand Bahama Island, but many streets are either flooded or are blocked by submerged cars.

Dozens of people were going back and forth to help with the rescue. Some of the people rescued were utterly exhausted after spending all night clinging to their roofs or being stuck in their attics.

One rescued man told CNN his wife drowned in front of him.

Dorian inched away from the northern Bahamas after lingering over the islands for days, leaving catastrophic damage and people stranded in flooded buildings.

The storm was headed toward Florida's Atlantic coast, parts of which are expected to endure hurricane winds and storm surge over the coming two days even as the center likely stays offshore.

Since it smashed into the Abaco Islands as a Category 5 storm on Sunday, it has knocked homes to the ground and flooded streets in the northern Bahamas.

"Whatever you can send, we'll take it, because we are in trouble," he said.

Dorian — the strongest hurricane ever to make landfall in the Bahamas — moved only 30 miles in 30 hours from Monday into Tuesday, mercilessly raking the same areas with destructive storm surge and winds.

At 6 p.m. ET Tuesday, Dorian was heading slowly to the northwest at 6 mph. By the time the storm moves away, parts of the Bahamas will have received more than 30 inches of rain, forecasters said.