Surveillance video from the store appears to show incidents of shoplifting, but the couple’s attorney says despite all that, “it doesn’t justi... 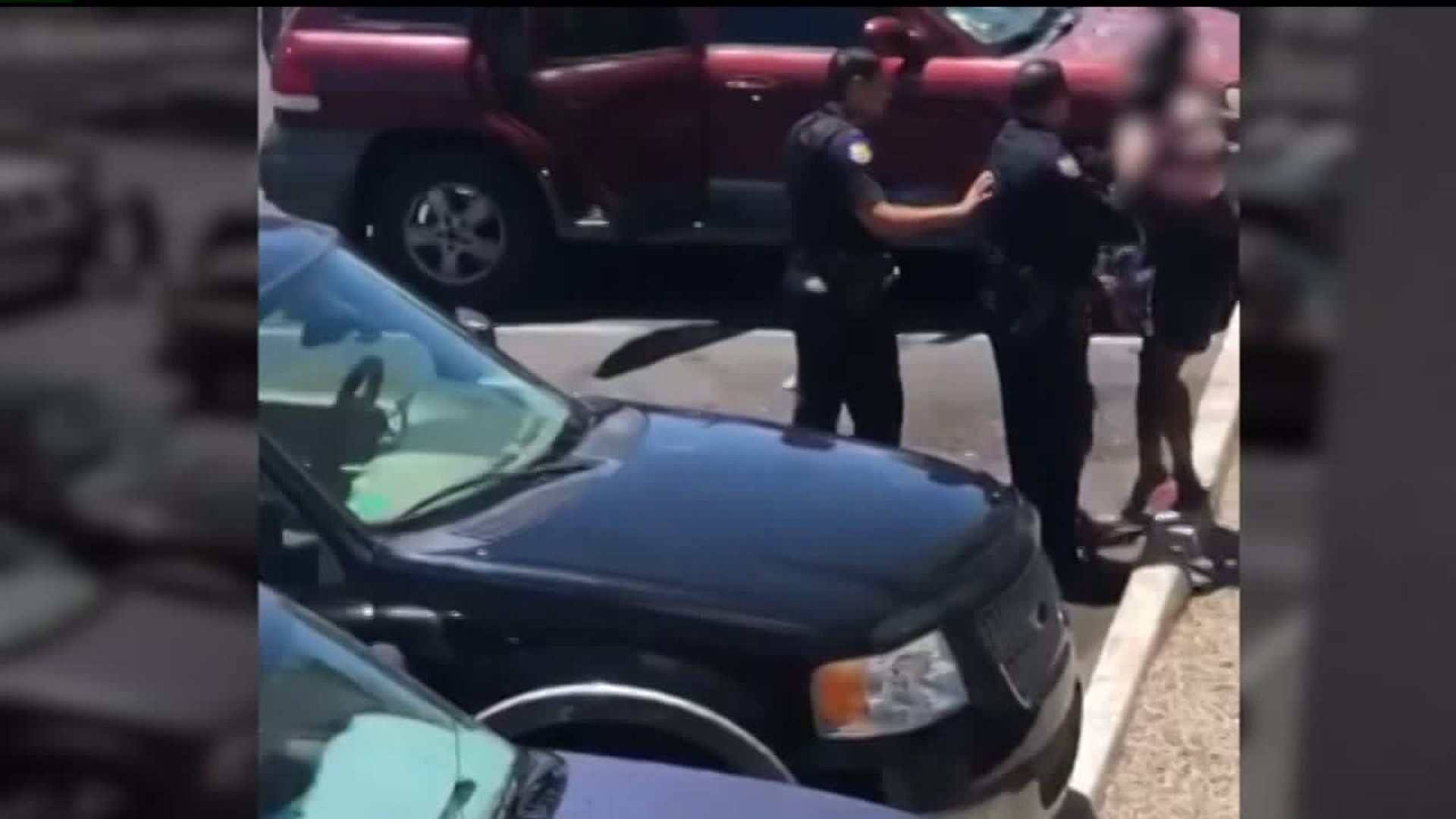 (CNN) -- The couple who say Phoenix police terrorized them after their daughter took a doll from a store will speak with the city's mayor during a meeting Tuesday evening, June 18, and will be joined by other members of the community who say they have experienced police brutality, a family spokesman said.

Phoenix Mayor Kate Gallego announced the meeting Saturday, saying she "asked our police chief to be present to listen directly to the concerns of our community members," and discuss solutions.

The move came shortly after two videos surfaced that showed officers pulling guns on and threatening to shoot Dravon Ames and his fiancée, Iesha Harper, during a shoplifting investigation last month. The couple say their daughter walked out of a Family Dollar store with a doll without them noticing.

Police released surveillance video from the store Monday. One video shows Ames standing in a store aisle. According to the police report, he told officers he stole underwear. In another clip, a little girl holding a box is seen talking to a woman who appears to be standing in a checkout line. That woman throws the merchandise she had been holding at a display and walks out of the store. The little girl waits for two other adults and leaves the store with them, still holding the box.

After the release of the store's surveillance footage, the couple's attorney, Thomas Horne, said nothing justifies the police response.

Harper told CNN she is thankful that bystanders pulled out their phones.

"I feel like we wouldn't be sitting here today if it wasn't for those people who recorded because them officers came at us so hard and didn't think twice about my children, didn't have no sympathy that I had a 4-year-old and 1-year-old in the car," she said.

"(They) made it seem as if I had a gun, and they knew the whole time it was about a Barbie doll, so obviously there are kids in the car."

The Rev. Jarrett Maupin, the spokesman, said Monday that the families who would be attending Tuesday's meeting include relatives of Michelle Cusseaux, whom a Phoenix police officer killed in 2014; Edward Brown, who was paralyzed after an officer shot him in August; and "any number of people who have been killed or harmed by Phoenix police."

Maupin called the meeting a "sham" but said the family will be there to "drop off their opinion on what needs to happen ... in order to change the employment policy that allows police to not be disciplined for what they do in this city."

The officers involved have been placed on desk duty while an investigation takes place, police said.

What the video shows

Ames and Harper have filed a notice of claim against the city for $10 million, a precursor to a lawsuit.

The couple said they didn't notice when their 4-year-old daughter walked out of the store with a Barbie doll. Officers followed their car from the store and stopped them in the parking lot of an apartment complex, according to the police report.

In the videos that have surfaced, one officer can be seen handcuffing Ames, first on the ground and then against a police car. The officer kicks Ames and can be heard yelling multiple times, "When I tell you to do something, you (expletive) do it."

Another officer appears to be pulling a gun on the passenger side of the couple's vehicle before Harper exits the car, holding a small child, with a second child by her side. Harper was five months' pregnant at the time. One officer tries to yank the child from her arms and eventually allows her to give the child away to a person the couple said was a stranger, because Harper did not want to give her children to police.

In a statement, police said the incident began when store employees advised an officer of a shoplifting incident and directed the officer to people getting into a car. As the officer walked toward the vehicle, the car quickly backed up and left the parking lot, police said.

According to the police report, an officer gave loud verbal commands for the occupants to get out with their hands up.

The report said Ames yelled he didn't do anything and began reaching toward the center of the vehicle, causing the officer to draw his handgun. Ames then began to comply and put his hands above the steering wheel, and he was then handcuffed, the report said.

The officer gave commands to Harper, still inside the vehicle, to put her hands in the air, but she refused, the report said. The officer feared she was hiding something or was reaching for a weapon, according to the police report.

The family said Monday the police report is "full of lies."

"There was a lot of very brutal, physical brutality that went on," Horne, the couple's attorney, said Monday night.

Police threw Ames to the ground, pressed his head on hot asphalt, handcuffed him too tight, used his head to close a car door, punched him in the back and kicked him in a manner that prevents him from doing labor at the warehouse that employs him, Horne said.

Ames said he didn't take anything out of the store.

"I feel like they're trying to make my family look bad on top of already terrorizing us and hurting us already physically, mentally," he said. "My daughters are traumatized; they'll never look at police officers the same. They're supposed to help and serve and protect."

Ames said it's "frightening to put families' lives at stake over materials."

He's dismayed that his 4-year-old and pregnant fiancée had to "look a barrel in the eyes," he said.

"We're not treated with the same respect," Ames said. "They try to dehumanize us. We will never be the same. I keep on picturing guns pointed at me. I keep having flashbacks. ... It's clear to see everything in that video. It's just nasty. It's very sickening."

Sandra Slaton, a lawyer who is working with Horne, also said nothing justifies the officers' actions.

"Let's just assume, for the sake of argument -- which we do not assume, really; it's not the case -- let's just assume everything was true in the 16-page report," she said. "It still would not justify the horrific, barbaric action of this police department."

Both the mayor and police Chief Jeri Williams have apologized for the officers' actions, with the chief saying the incident is not "representative of the majority" of Phoenix officers.

Ames said the mayor's apology hasn't helped the family and the fact that the officers are still working is "just basically a slap in the face."

Maupin said no one has personally apologized to the family.

"You really ought to pick up the phone. The mayor knows our phone numbers. The police chief knows (our phone numbers)," he said. "They went on an apology tour. That's not being accepted locally or by any people around this country with a conscience that are demanding to see something of substance done in this city."