Muscatine printmaker uses art to work through difficulties of ALS 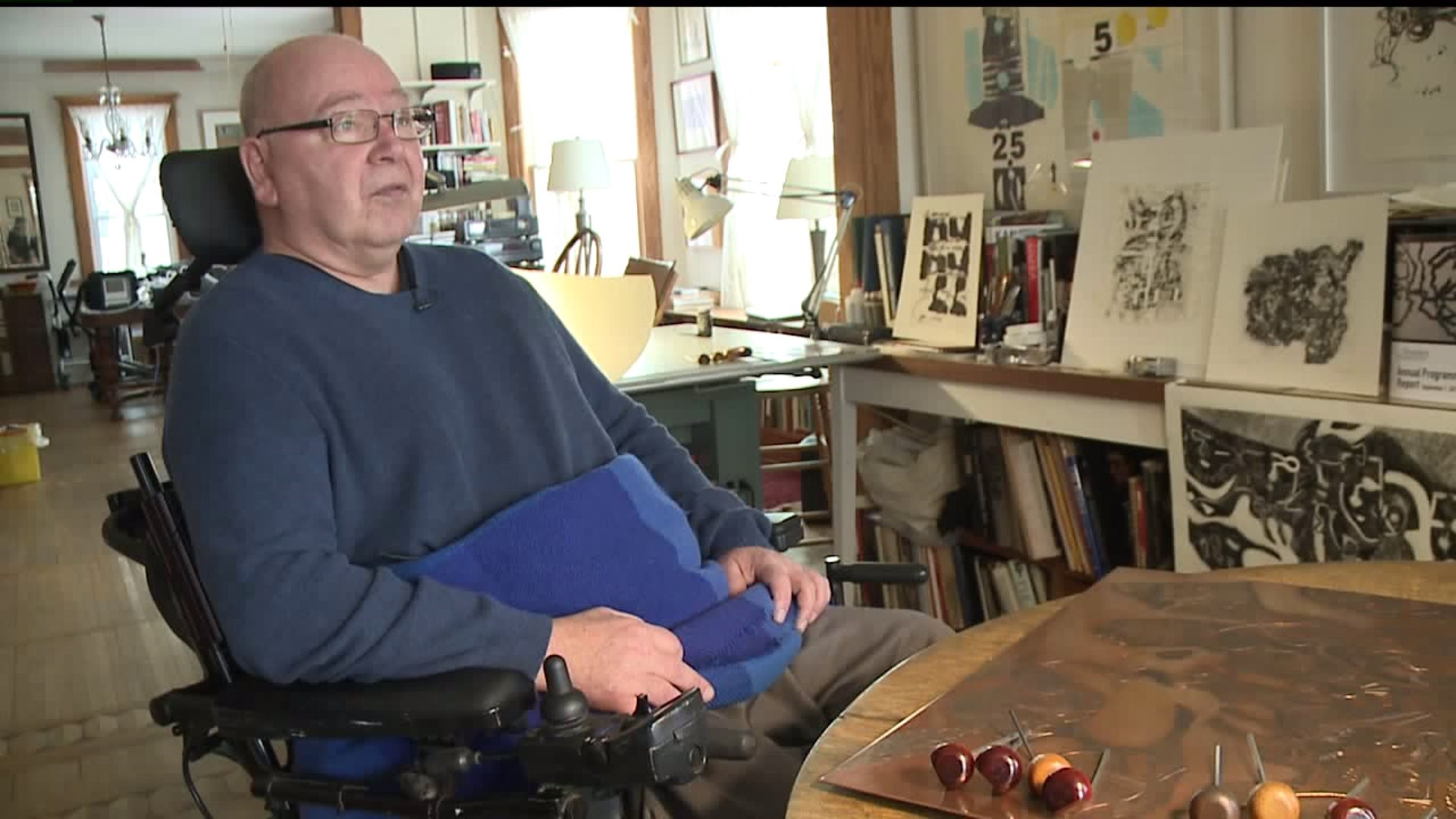 MUSCATINE, Iowa — From his front room, Muscatine artist, Jon Fasanelli-Cawelti creates, using an engraving tool to cut tiny trenches into copper plates bound for a printing press. The technique is called Intaglio and dates back to the 14th century.

"I get to work out my own challenges and difficulties, in my art," said Fasanelli-Cawelti, sitting in the front room of his home in January.

For the technique, Fasanelli-Cawelti slowly and diligently creates images by cutting into copper plates. He then puts handmade ink into the trenches and skillfully wipes away excess ink. The plate, with paper, goes through a powerful printing press that he has in his shop out the back of his home.

"I am very very lucky, because the discipline of it seems to suit having a progressive disease," said Fasanelli-Cawelti. " Engraving is very slow. You measure your progress by the square inch and that fits in pretty good with this very rare form of ALS that I have."

What started with a limp, let to an ALS (Amyotrophic Lateral Sclerosis) diagnosis 14 years ago. The disease attacks nerve cells in the brain and spinal cord. There is no cure and no way to stop it, but that doesn't stop Fasanelli-Cawelti.

"Plugging away, it's real easy to give up, it takes serious technology to get me out of bed."

Intaglio has been his passion since college, when he studied under renowned printmaker, Mauricio Lasansky at the University of Iowa. That decision came after four years of college with no degree. Fasanelli-Cawelti's father told him to go student under Lasansky.

"He might be the only one who can help you, that's what he said," Fasanelli-Cawelti said laughing. The decision ended up being a good one - he studied under Lasansky for years after college.

"I got to spend a long time getting to see how someone so brilliant thought."

He did his work standing for decades, "It's just one of those ironies, where I spent an enormous part of my life standing up, and now I'm spending this stretch sitting down."

For the last five years Fasanelli-Cawelti's ALS has put him in a wheelchair, still, the artist created an exhibit's worth of brand new art, which is now on display as the feature exhibit at the Muscatine Art Center. The exhibit is called Atlas, named after the Greek god, Atlas, who holds up the world.

"I thought it was a good combination since I liked maps, but also a metaphor for my caregiver, Diane, who is clearly holding up my world."

Diane is Fasanelli-Cawelti's wife and caregiver. He acknowledges a lot of people help him these days, including, his late mentor, Lasansky who would have wanted his former student to continue creating.

"We don't retire," said Fasanelli-Cawelti, adding that his battle is all about positive energy - he says a positive attitude is his medication.

"I don't feel sick I don`t feel disadvantaged I don't feel unlucky. Instead, I have images that I want to make."

There's still work to be done.