“We opened up the walls and discovered a parent’s nightmare. The rooms my children were sleeping in were so mold-covered the frame of the house was ... 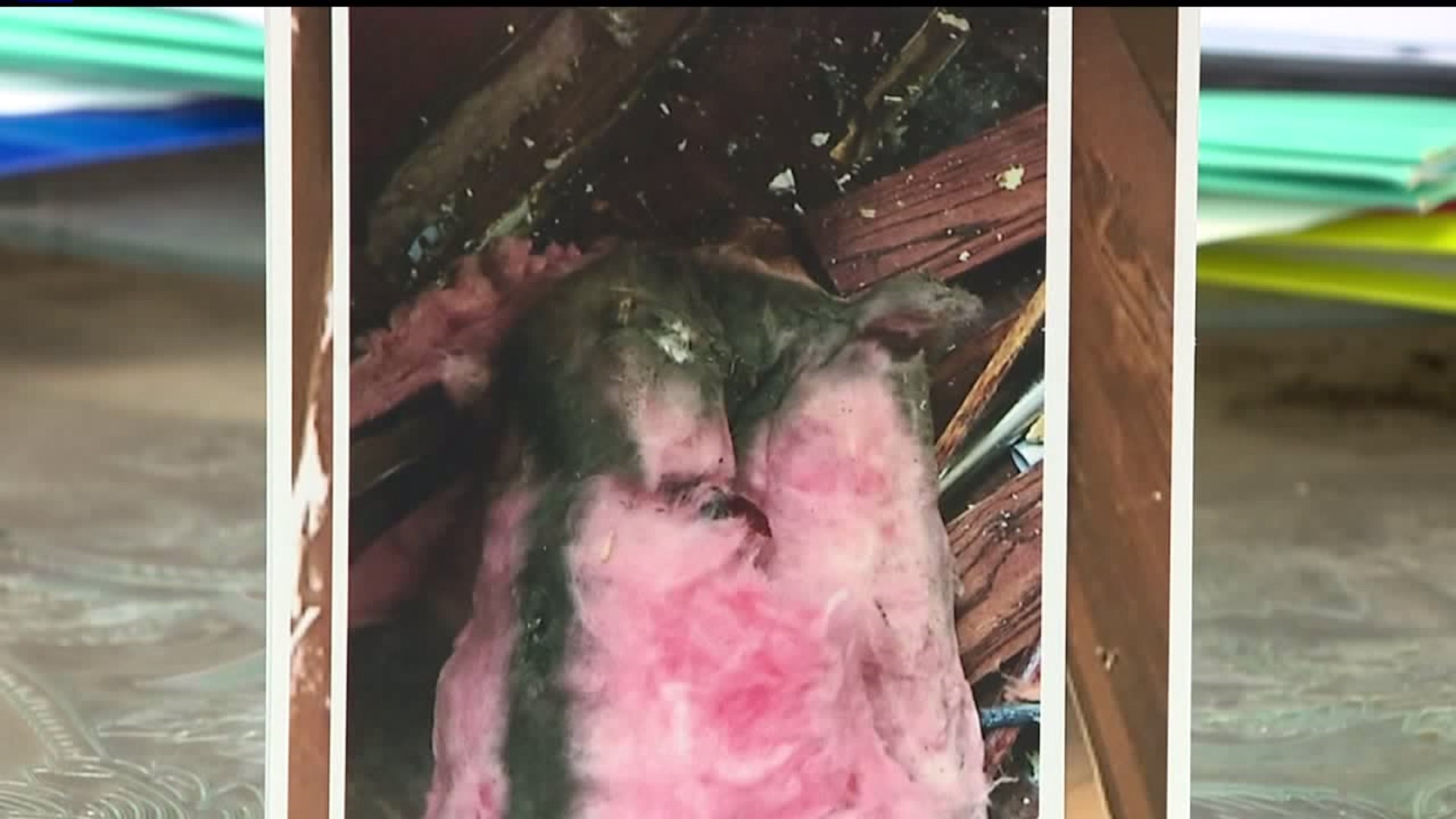 MILAN, Illinois - A Milan homeowner says he and his family have been going through hell in a dispute with American Family insurance over toxic mold in their home and what caused it.

"They've been lying to us. They haven't been up front and honest, they've been deceitful, just everything you would not expect from an insurance company," said homeowner Jason Beeks.

He and his family have been forced to flee their home because of toxic levels of mold.

"Right now, the atmosphere inside the house is not live-able. It will kill you," he said.

He says it started after a heavy wind and hail storm that hit the neighborhood on August 2, 2015. Several roofs were damaged, and Beeks filed claims on two vehicles and his 7-year-old roof.

The insurance company sent someone to inspect the roof. Claims for the two vehicles were accepted, the roof, denied.

"They said there was no damage, no damage at all. You're fine," Beeks said.

But, over the next year, he and his partner, Melissa Brandmyer and their kids were sick. All the time.

"My daughter had ringworm, throat problems, a fungal infection, bacterial infection. My son's been to Iowa City for infectious disease," said Brandmyer.

In January, they found out why, after a neighbor alerted them to a spot on the roof where he suspected water may be leaking.

"We opened up the walls and discovered a parent's nightmare. The rooms my children were sleeping in were so mold-covered the frame of the house was rotting the structure. It was eating the wood," Brandmyer said, showing pictures of the black mold.

They say environmental testing they paid for showed off the charts mold levels.

"The company's owner, he personally called me and said, 'I've done this 25 years, and I've never seen levels that high. You need to get your children and husband and you need to leave," she said.

"The mold levels are so high, you have to wear a mask just so you're not inhaling spores. Our lungs sound like Velcro every time we breath", Brandmyer said.

"It's in the floor joist, it's in the floor boards, sub-flooring. It's taken over, man. When I took the dry wall and the insulation, the fiberboard behind it just disintegratd," Beeks said.

American Family has repeatedly denied the couple's claims over the past two years, writing "There is no mold issue on the interior walls of the house", "No active or dormant mold growth within the house", and says it inspected the roof after the storm in 2015 and didn't find "any evidence of damage."  Instead, the company blames the mold on "improper attic ventilation".

"They don't care about you. They care about money. These guys sent an engineer here, knew there was active mold, sent a report back saying there's nothing, and let my child and us still live here. We had to go pay our own money to get an environmental company to run a test that says you shouldn't be living here", Beeks , a machinist who works on Arsenal Island, said.

In a last ditch effort, Beeks also recently hired an independent insurance adjuster to try and fight the denials.

Neal McLoughlin is a licensed public adjuster out of Chicago and says he believes the couple has a very valid claim, and says he is seeing more cases like this one.

"This is not uncommon. A lot of my clients are in the same position. Three common words in the industry are delay.  Deny.  Defend. Delay the claim, deny the claim, and eventually tie it up with attorneys," said McLouglin, who is also a veteran police officer in Chicago.

"It seems the claims departments are not as free to pay claims as they were say, 20 years ago. They're there to make profits for their investors," he said.

Sean Vogler of Old Towne roofing in Moline says he found damaged and compromised shingles on the Beek's roof, and found more than adequate ventilation in the attic, disputing the insurance company's claims.

"He said there is certainly wind damage and it would certainly allow intrusion into the house," McLoughlin said.

The latest appeal by the couple was denied, the case closed.

But, earlier this month WQAD-TV contacted the company headquarters in Madison, Wisconsin, and asked for an interview  and clarification about the case.

Four days later, the company said it is re-opening its investigation in the two-year-old ordeal.

"We work with our customers to pay for damage covered by the policy. It's a responsibility we take seriously, including in this situation where we've conducted our own inspection, received an opinion from one outside engineering firm and are now seeking another opinion from a second outside engineering firm," writes media relations representative Erin Johansen in a statement to WQAD-TV.

"We empathize with Mr. Beeks and his situation. We will continue to work with him and his representatives to reach a resolution," the statement said.

The family has fought to have their side heard every step of the way.  Currently, they have no place of their own to live, forced to stay with different relatives. Running  out of patience, money, and hope.

"I'm stuck with $70,000 on my mortgage, with no place to live. The roof failed during that storm, causing water in and it snowballed from there. We couldn't see it. We couldn't smell it. We didn't know," Beeks said.

"The insurance company is not acting in good faith. I can take  a lot. I am a tough guy. But this, has damn near broke me," he said.