This video shows the moment a truck’s tire blew, sending the vehicle into a turn-over-turn across Interstate 88. 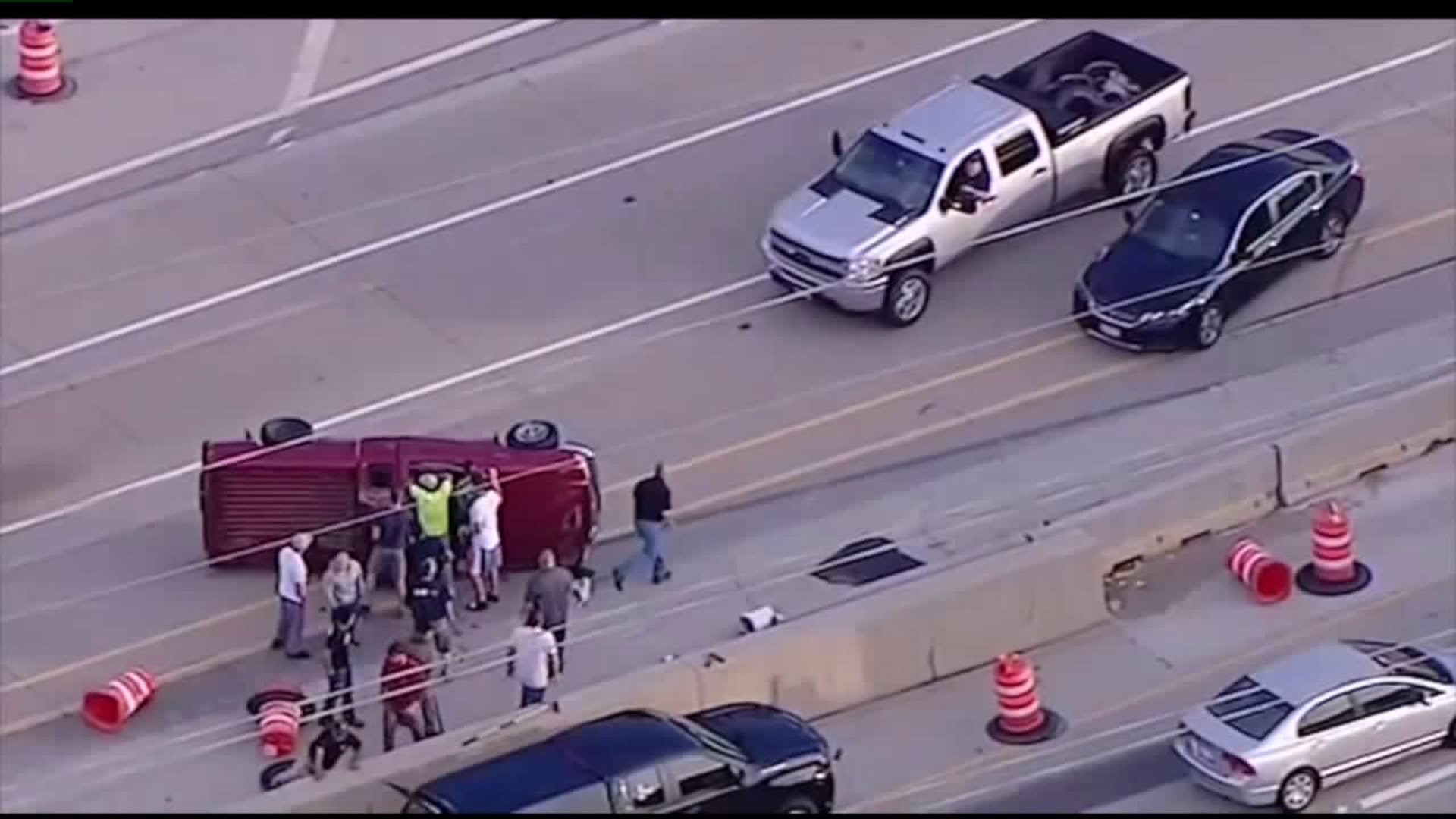 (CNN) -- A handful of Good Samaritans worked together to turn a car on its side and rescue the driver after the car flipped over on a busy interstate.

Six to eight construction workers and drivers rushed to the scene to help the man on Interstate 88 in suburban Chicago on Monday morning. The man had been driving a pickup truck when the rear tire blew out, sending the car twisting and rolling over into the shoulder during rush hour.

Tom Meyers, a firefighter and paramedic, was leaving his job at the Rosemont Public Safety Department on Monday when he saw the wrecked vehicle. He pulled over as the other bystanders were trying to flip the pickup truck on its side.

Meyers put on his bunker pants -- part of his firefighter gear -- and assessed the situation.

"They were construction workers and business men," Meyers told CNN on Monday. "The car was on its roof and they had flipped it on its side. I just started talking to the guy and assessing him. The guy was talking to me and he seemed fine."

Some of the bystanders had crow bars and saws, so the group was able to remove the windshield, Meyers said. Meyers then cut the seat belt off and kept talking to the driver.

"Miraculously he didn't have any injuries sustained," he said.

The man wanted to get out, so Meyers and the others helped him. Meyers assessed the man until local firefighters could get there.

"When you get into that work mode, you want to help somebody," Meyers said. "It was just getting to him and seeing how he was doing and going from there."

Little did Meyers know that the whole thing was being caught on camera.

The accident and rescue were all recorded by CNN affiliate WLS, which had a chopper flying over morning traffic in Oak Brook, Illinois. The accident happened at about 6:47 a.m., according to WLS.

Meyers, 27, has been a firefighter and paramedic for 10 years. He started as a volunteer and then worked up to full-time. Beyond his full-time gig in Rosemont, he also works part-time in Aurora.

He's seen his share of accidents, but nothing this big. "Stopping is not something that's out of the ordinary when we see it," he said.

Meyers said the man thanked everyone for helping him as they were assisting him.

"I'm just glad the guy's OK," Meyers said. "It's amazing that those bystanders stopped and how incredible it was for everybody to work together."