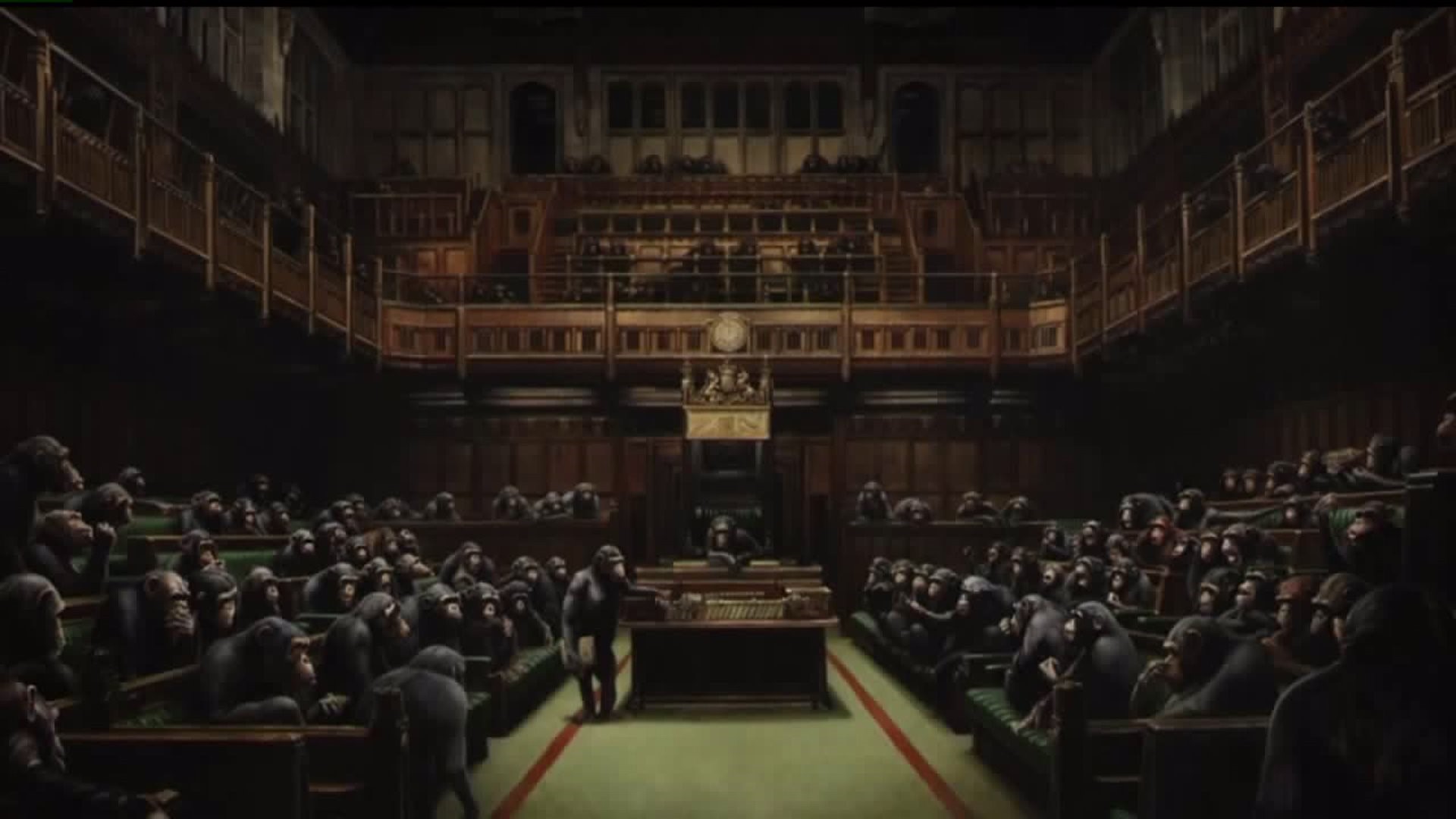 (CNN) -- British artist Banksy's "Devolved Parliament," a satirical oil painting depicting the House of Commons filled with chimpanzees, has sold at auction in London for a record-breaking £9,879,500 ($12,200,000), after going on display in Bristol in March to mark the first missed Brexit deadline.

Previously, the highest price the artist had commanded at auction was $1,870,000 for "Keep it Spotless," a Damien Hirst spot painting which Banksy updated with a spray-painted hotel maid. The artwork was sold at Sotheby's New York in 2008.

"Devolved Parliament," Banksy's largest canvas at 13 feet, was created in 2009 for the Banksy vs. Bristol Museum exhibition, and was initially titled "Question Time." Ahead of its reappearance at the Bristol Museum the day before March 29 -- the original "Brexit Day" -- the anonymous artist renamed it, as well as reworking a few details in the painting, extinguishing the House of Commons lamps and turning a banana held by a chimp upside down.

Steve Lazarides, Banksy's former agent, said in a phone interview that the buyer of "Devolved Parliament" must have seen more than monetary value in the painting. "It has to be more than just money, otherwise why wouldn't you just invest in gold?" Lazarides said.

At a previous Banksy auction at Sotheby's, in October 2018, the famously disruptive artist pulled off an elaborate stunt: after "Girl with Red Balloon" sold for $1.4 million, the painting was partially reduced to ribbons by a shredder concealed within the frame.

The shredded artwork was renamed "Love is in the Bin," and the auction house now refers to the incident as "the first time an artwork has been created during a live sale."

Earlier this week, a Banksy installation set up like a showroom appeared in Croydon, south London, featuring the stab-proof vest worn by grime superstar Stormzy for his July headline set at Glastonbury Festival.

A flyer posted on Banksy's Instagram, titled "Gross Domestic Product," suggests an online sale will open soon. The flyer reads, "This shop has come about as a result of legal action. A greeting cards company are trying to seize legal custody of the name Banksy from the artist, who has been advised the best way to prevent this is to sell his own range of branded merchandise."