Two Iowa police officers were found fatally shot in their squad vehicles at separate intersections in the Des Moines area early Wednesday, and a suspect was tak...

(CNN) — A suspect in Wednesday morning’s apparent ambush killings of two Iowa police officers was taken into custody hours later, after he flagged down a natural resources officer a county away from where the killings happened, police said.

Greene, of Urbandale, was taken into custody later that morning after he flagged down a state Department of Natural Resources officer while walking on a gravel road in Dallas County and asked him to call 911, police said. 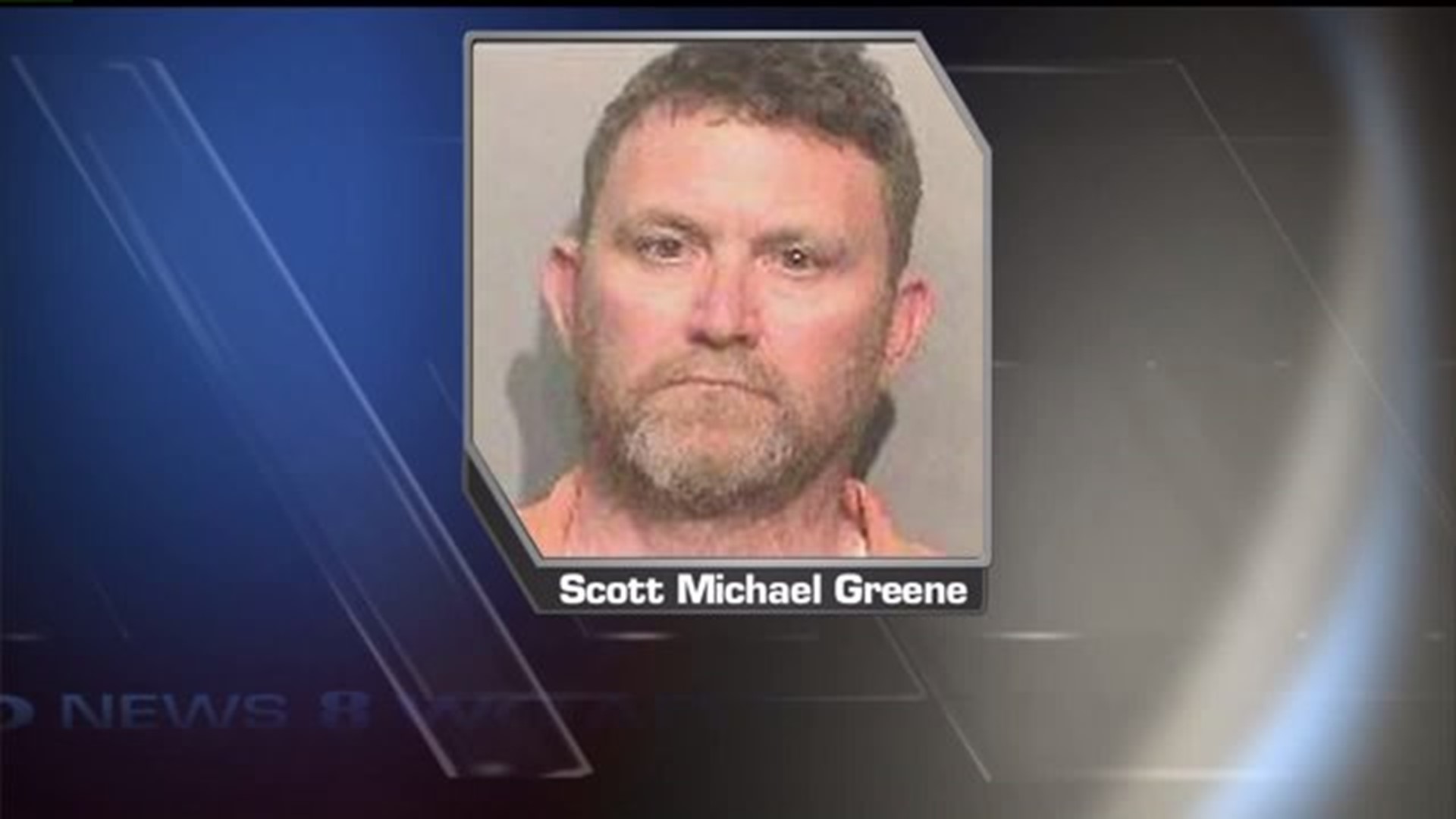 Greene was not charged in the killings as of noon, but he is "suspected of doing this," Des Moines police Sgt. Paul Parizek said, citing unspecified tips and leads.

Urbandale police said they'd interacted with Greene before -- including about two weeks ago, when they told him to leave a high school football game.

But Parizek said there was nothing to immediately indicate that either Martin or Beminio had any previous contact with him.

Nor did it appear that the officers had much warning that someone was about to shoot them, Parizek said.

"On the surface right now ... it doesn't look like there was any interaction between these officers and whoever the coward is that shot them while they sat in their cars," Parizek said, holding back tears, before Greene was named a suspect.

Greene was taken to a hospital after complaining of an issue with an existing medical condition, and detectives are expected to interrogate him soon, Parizek said.

Local and state police departments have been posting to social media throughout the day to express their sadness at the senseless murder, and to offer condolences to the affected families. In Des Moines, memorials for the fallen officers are popping up as the community grieves. 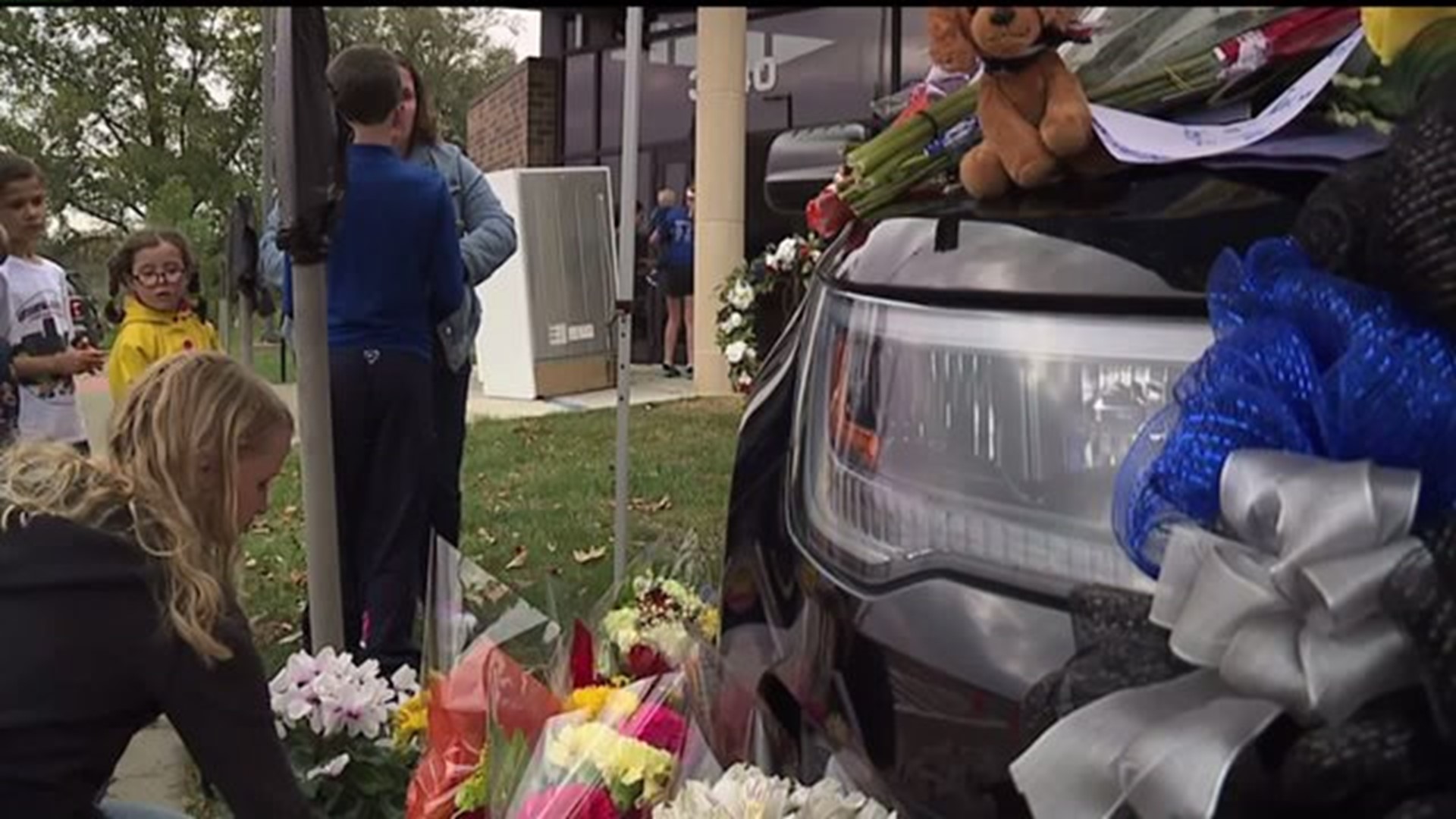 So many flowers on this Urbandale Police car. The department at which Officer Justin Martin, who was killed on-duty this AM, worked. pic.twitter.com/GNYtV3xUyu

The names of the officers have been released: Sgt. Anthony “Tony” Beminio w/ the Des Moines PD & Officer Justin Martin of the Urbandale PD.

Tweets below are from WHO-TV's reporter/anchor Jannay Towne

A person recognized Greene and called 911. He was on foot at the time on G Trail

'These guys were gunned down ... doing nothing wrong'

Police discovered Martin's body around 1:05 a.m., after nearby residents reported shots being fired. Martin's body was seated in his squad car, at an Urbandale intersection just northwest of Des Moines, Parizek said.

Twenty minutes later, as officers responded to the Urbandale shooting, Beminio was found shot in his squad vehicle, at an intersection in Des Moines.

Beminio later died at a hospital, Parizek said. He said both officers were on patrol. Neither was responding to a service call, and neither had radioed about a confrontation.

"In all appearances it looks ... that these officers were ambushed," Parizek said.

"These guys were gunned down sitting in their car, doing nothing wrong."

Urbandale police had asked Greene to leave a high school football game about two weeks ago, prompting him to complain that police were infringing on his rights, McCarty told reporters Wednesday morning.

Greene was asked to leave after he waved a Confederate flag in front of "people of color" during the national anthem, and other people complained it was offensive, McCarty said.

"He said he was invoking his First Amendment rights, and we were trampling on them," McCarty said.

Police warned Greene to "cease and desist," and he afterward was negotiating with the school about when he'd be permitted at the school, which his daughter attends, the chief said.

Greene is white, as were Martin and Beminio, police said.

The shootings bring renewed pain to a community that recently mourned the deaths of two other Des Moines police officers. They were killed in March when their vehicle was hit head-on, police say, by a driver going the wrong way.

As news of Wednesday's shootings spread, a woman gave bottled water and other supplies to an Urbandale police officer who was standing along a street, and tearfully gave him a hug, video from CNN affiliate KCCI showed.

'A great friend to a lot of us'

Parizek, the Des Moines police spokesman, choked up as he spoke of Beminio, an 11-year veteran of the force who once worked under Parizek's patrol.

Beminio, married with children, had been a school resource officer and a robbery homicide detective, and was recently promoted.

"A great friend to a lot of us," Parizek said.

"We had high expectations (for) his future, and it's tragic it's been cut short," the chief said.

Wednesday's deaths bring to at least 51 the number of police officers fatally shot in the US and Puerto Rico in 2016. That's the highest one-year total since 2011, when 73 were shot dead, according to the National Law Enforcement Officers Memorial Fund.

On July 7, a gunman shot and killed five police officers in Dallas during a protest of controversial police shootings of black men in other states. The Dallas shooter, who police subsequently killed, said he was upset with the other shootings, police said.

Long apparently visited Dallas after the shootings there, posting a YouTube video July 10 in which he spoke of the protests, and a notion that victims of bullying need to resort to brute force.

The Baton Rouge and Dallas shootings came after the controversial shooting deaths of two black men by police officers, including that of Alton Sterling in Baton Rouge on July 5 and Philando Castile in Minnesota a day later. The shootings spurred protests across the country.

'I don't even know where to begin, how bad this year is'

"I don't even know where to begin, how bad this year is (for Des Moines police)," Parizek said, after a reporter asked him how officers can prepare to do their jobs amid another tragedy. "This is what we do. We come in, day in, day out. We go out there and we provide the same level of service regardless of what's going on in our personal or professional lives."

"We know we've got the best community. We saw that after Carlos and Susan were killed, and I certainly expect we're going to see the same thing coming," he said.

The Urbandale Police Department, a force of about 50 officers, said it believes this is the first officer it has lost in the line of duty.

"An attack on public safety officers is an attack on the public safety of all Iowans," said Ben Hammes, spokesman for Iowa Gov. Terry Branstad. "We call on Iowans to support our law enforcement officials in bringing this suspect to justice.

"Our thoughts and prayers go out to the families of the police officers who were tragically killed in the line of duty as well as the officers who continue to put themselves in harm's way."