He says the lack of health care left him with gaping wounds and amputated toes. 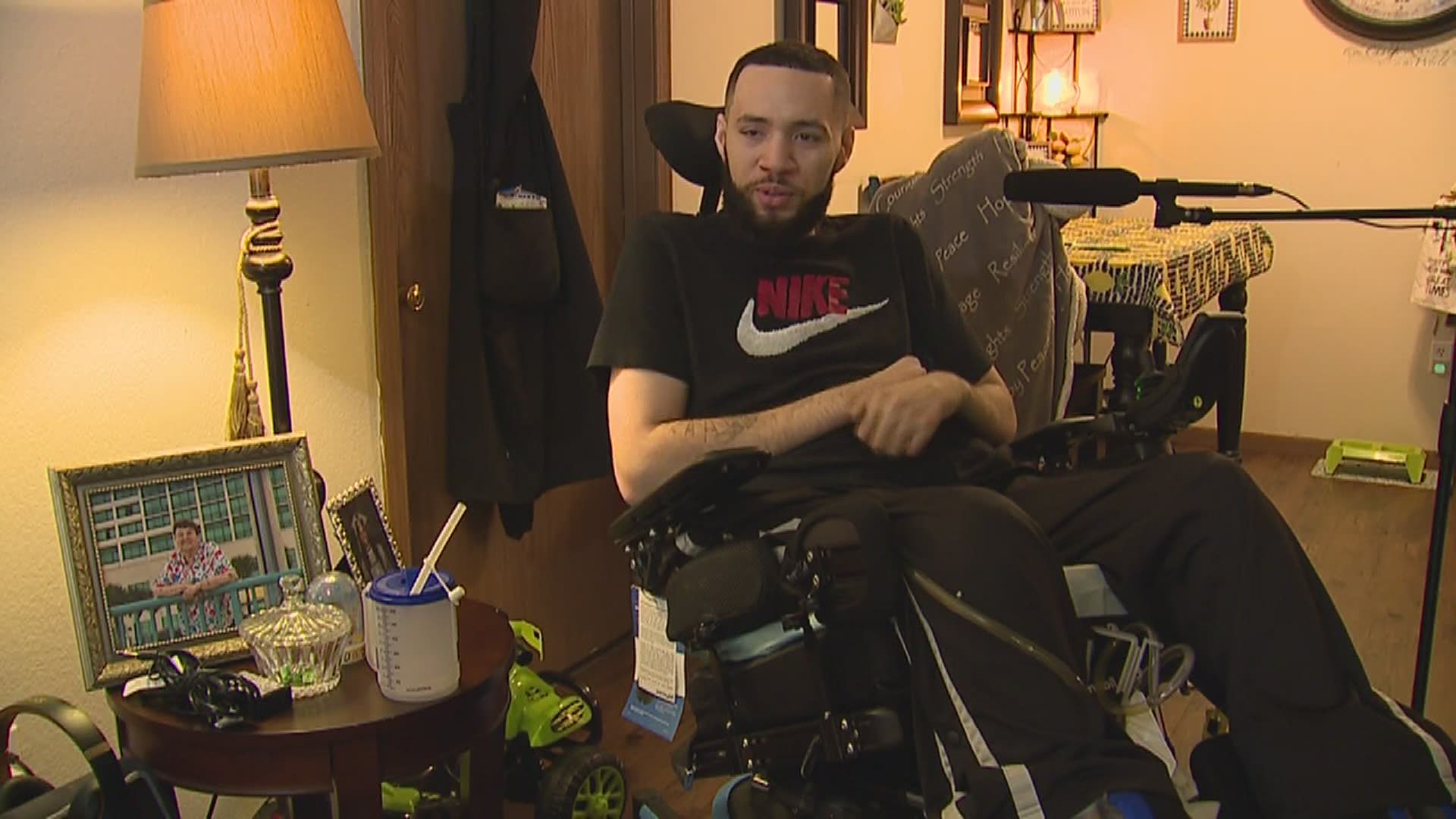 GALESBURG, Ill. — Warning: The video shows graphic images that some may find disturbing

Three years ago Tyler Henderson lost his freedom, charged with cocaine possession and sentenced to six years in prison.

One year into his sentence he was given work release, so he went home on a weekend pass.

Around 2am on October 28th, 2018 he says he was driving to a 24-hour Walgreens when he crashed. Emergency workers had to remove the car doors to get to him. The crash was so severe the floor board on the front passenger side exposed the grass beneath it. Officers say they found beer cans in his car and he had a blood alcohol reading of .257, three times the legal limit.

Tyler says all he can remember hearing is a loud bang and then a snap, "I had snapped my neck."

Tyler is now a quadriplegic, paralyzed from the chest down. With five years left of his sentence, Illinois Department of Corrections reduced his sentence to 17 months. Four of those months were spent in the hospital.

Tanya Henderson, Tyler's mom, says six weeks into his stay at Lawrence Correctional Facility, he started developing bed sores. 14 months later, Tanya says she was confronted with the severity of those bed sores.

"It was pretty horrific to see my child laying there with those wounds, when you're repeatedly told they're taking care of my child," she said.

Tanya said some of the sores were 10 inches wide.

"Holes that you could fit your fist into," says Tanya.

Three of them, "They were on his left buttock, his right buttock and on his tailbone."

According to doctors, someone in Tyler's condition needs to be turned every four hours. They need to be wiped down and dried and their bedding and clothing need to be changed regularly.

Tanya says, "His left leg and right leg both have, at that point, open wounds. That were approximately an inch and inch and a half deep. And about nine inches long."

Eight wounds in total. Tyler even had to have toes amputated. Tyler says, "Their excuse was that I wasn't telling them when I needed to be turned. When I am paralyzed and don't have no feeling."

When Tyler got a chance to call from his hospital bed, he'd say, "They're not coming mom. They're not turning me."

According to IDOC, driving while on work release is a violation of parole. Tyler said he knew that. IDOC wouldn't comment on Tyler's medical care, but said, "The Illinois Department of Corrections is firmly committed to ensuring all individuals in our custody receive quality medical care delivered with dignity, compassion and respect."

Attorney Louis Meyer representing Tyler, has fought 50 cases involving Wexford, he says, "He would be neglected, he wouldn't be turned or properly treated and he'd find himself back in the emergency."

Wexford is a for profit company that bid the state of Illinois for a contract to provide healthcare to inmates. The company has been involved in numerous lawsuits alleging neglectful or poor medical care, paying out millions of dollars to inmates.

"We want to punish Wexford," said Meyer. "Tyler deserves compensation for what he went through."

"Just happy to be alive that's all," he says.

Since being home in Galesburg, he hasn't had one bed sore.

Wexford Health did not respond to News Eight's requests for an interview. The state's contract with Wexford is worth nearly $1.4 billion, which is set to expire next year.

The Hendersons are filing for putative damages. They say they're suing doctors and nurses who were assigned to care for Tyler.