A benefit will be held for Trevor Bennett at Frickes Tap in Davenport on June 24 from 1pm to 6pm. 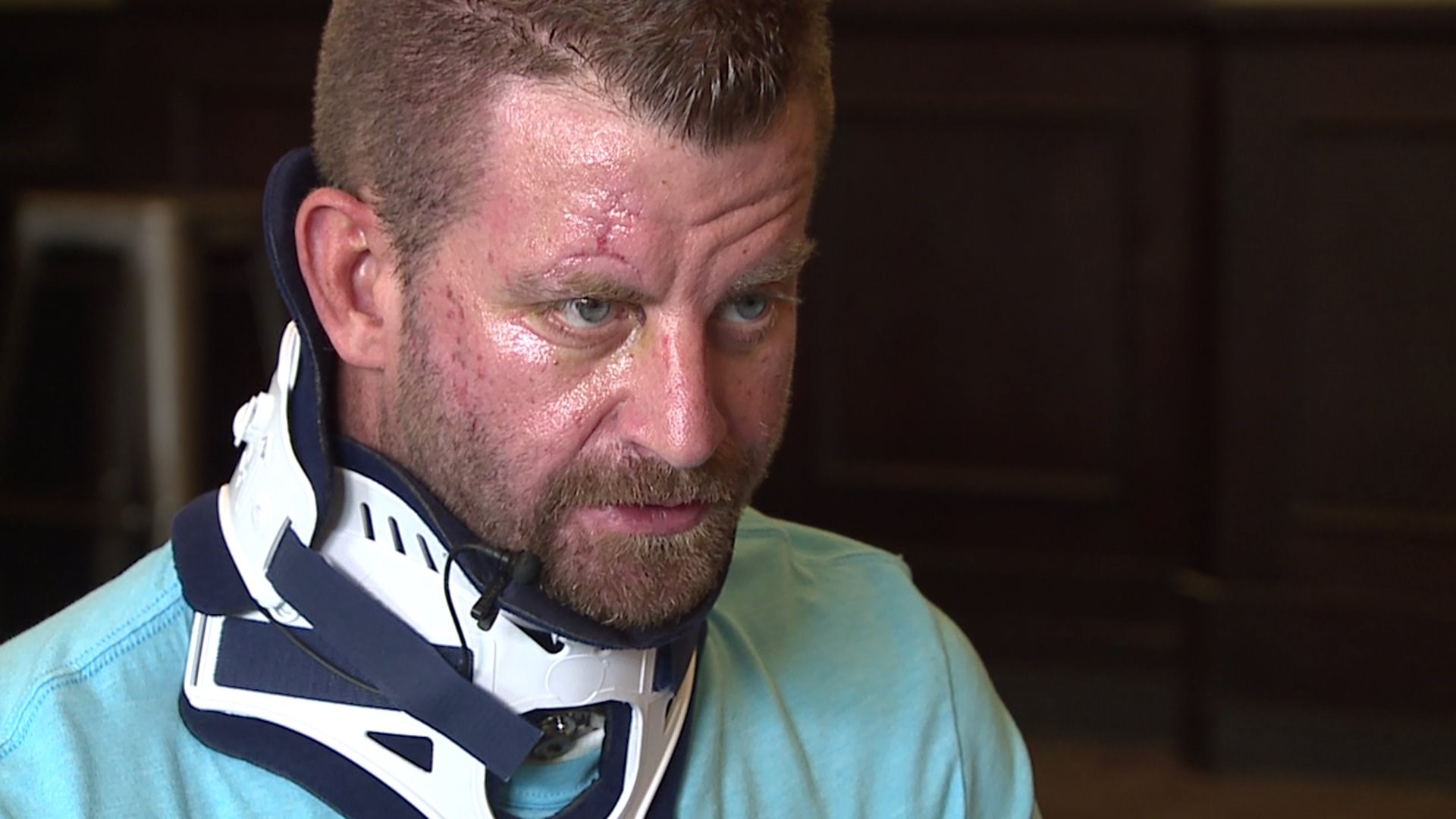 DAVENPORT, Iowa --A Davenport bodybuilder who was beaten and left for dead says he remembers nothing about the attack, but says he is lucky to be alive.

Trevor Bennett, 36, was released Wednesday from a hospital in Iowa City, nearly two weeks to the day of the savage attack near NorthPark Mall .

"It's a nightmare. To purposely stomp on somebody and crush their windpipe. The doctors told me another millimeter, they probably wouldn't have been able to save me," Bennett said in an interview with WQAD-TV.

He still has a metal tube inserted into his trachea to ensure he can breathe properly. That may come out in about six weeks. He also needed facial surgery and close to 90 stitches for his injuries, his vision is blurry in one eye, his walking unsteady, and he lost 50 pounds and some of his confidence.

"I'm on anxiety meds because I can't deal with the pain. To look at myself in the mirror right now, I'm disgusted, I hate the way I look," he said.

He says he remembers walking through the parking lot of the mall.

"Cause it's well lit, and once I hit the mall, that's all I remember," he said.

He says he doesn't remember being hit, or seeing his attacker or attackers. He believes there had to be more than one.

"I have been an athlete my whole life, a body builder, a trainer. I know how to protect myself, so it just boggles my mind. Whoever hit me from behind, got me down good. I remember waking up and look down at my hands, they were all bloody, cuts on them so I knew I was fighting for my life," Bennett said.

He was found unconscious across Kimberly Road. He says he has no idea how he got there.

"I either dragged myself or they threw me in their car and dumped me off. I don't know," he said.

He says his bloody phone and hat were both later recovered near the parking lot near Lunardi's Restaurant, and his credit cards were not stolen. He says maybe some cash was taken. He says he doesn't know if the attackers were strangers or connected to some kind of personal vendetta.

"Whoever did this, I forgive you. Why would you do that to a person? They didn't try to injure anywhere else, they went straight for my face and throat", he said.

He credits his fiancee Kelly Snow and his family and friends for pushing him to get better, and to keep the faith.

"When I first saw him in the hospital room, I almost fainted. This is attempted murder. If they ever catch who did this, they should be charged with attempted murder," Snow said.

At this point, police are still investigating. Snow said one problem is that surveillance cameras in the area were either off-line, not working, or grainy.

"They really need to up their surveillance," Snow said of nearby businesses.

"There was a lot of blood on his clothes and they did swab, so we're just praying there's some DNA from somebody else," she said.

Bennett worked for M and I Construction in sales. Without working, he is not getting paid. He has made amazing strides since the attack, but he is worried about the future.

Trying to regain his strength, but feeling physically and emotionally weak. And still can't comprehend why this happened.

"To constantly stomp and kick a guy beyond recognition. When Kelly showed me the pictures, I didn't even know who she was showing. I didn't even recognize myself."

A benefit will be held for Trevor Bennett at Frickes Tap in Davenport on June 24 from 1pm to 6pm. 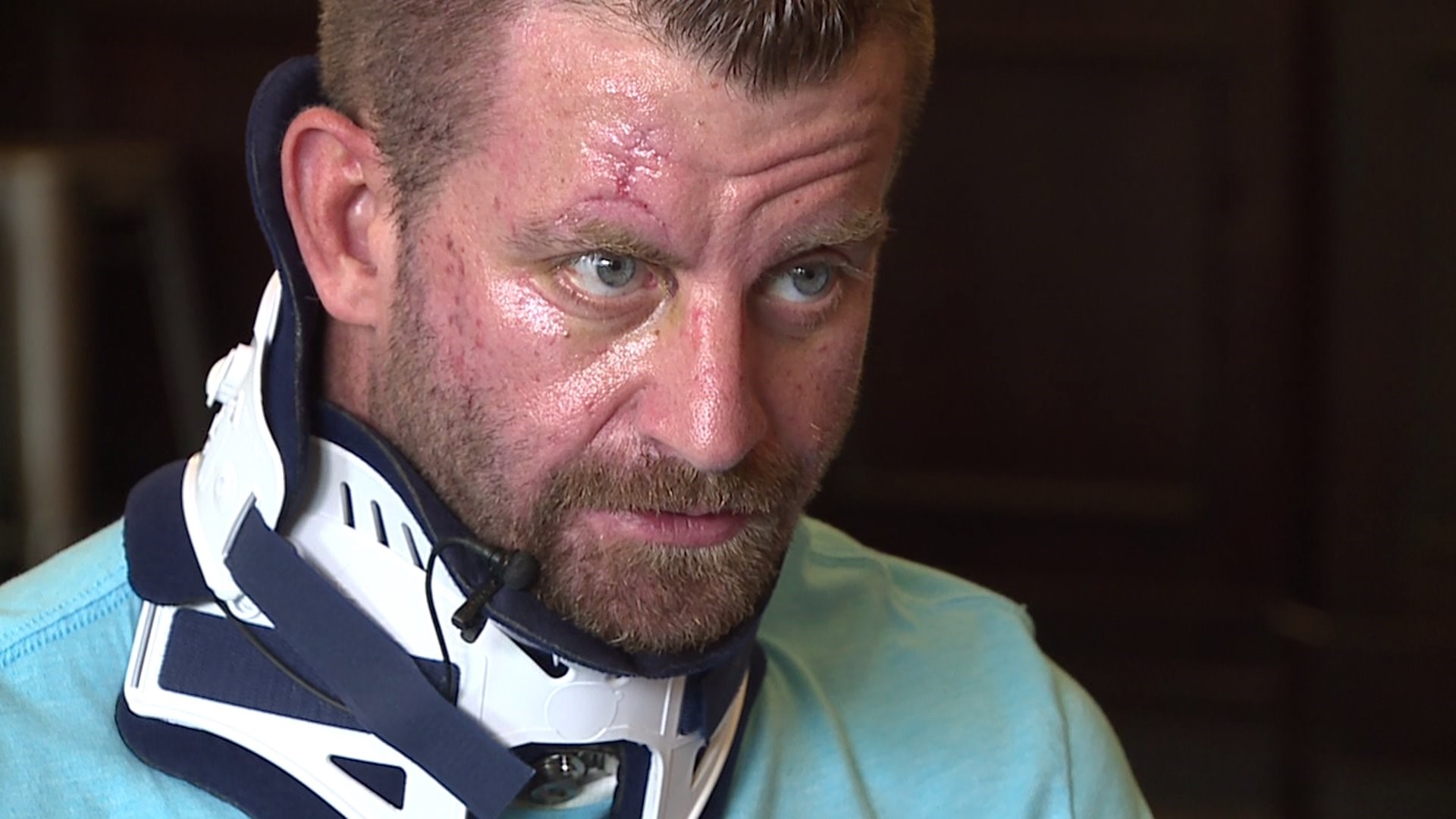