Mexican drug lord Joaquin “El Chapo” Guzman was sentenced to life in prison plus 30 years and was ordered to pay $12.6 billion in forfeiture on Wedn... 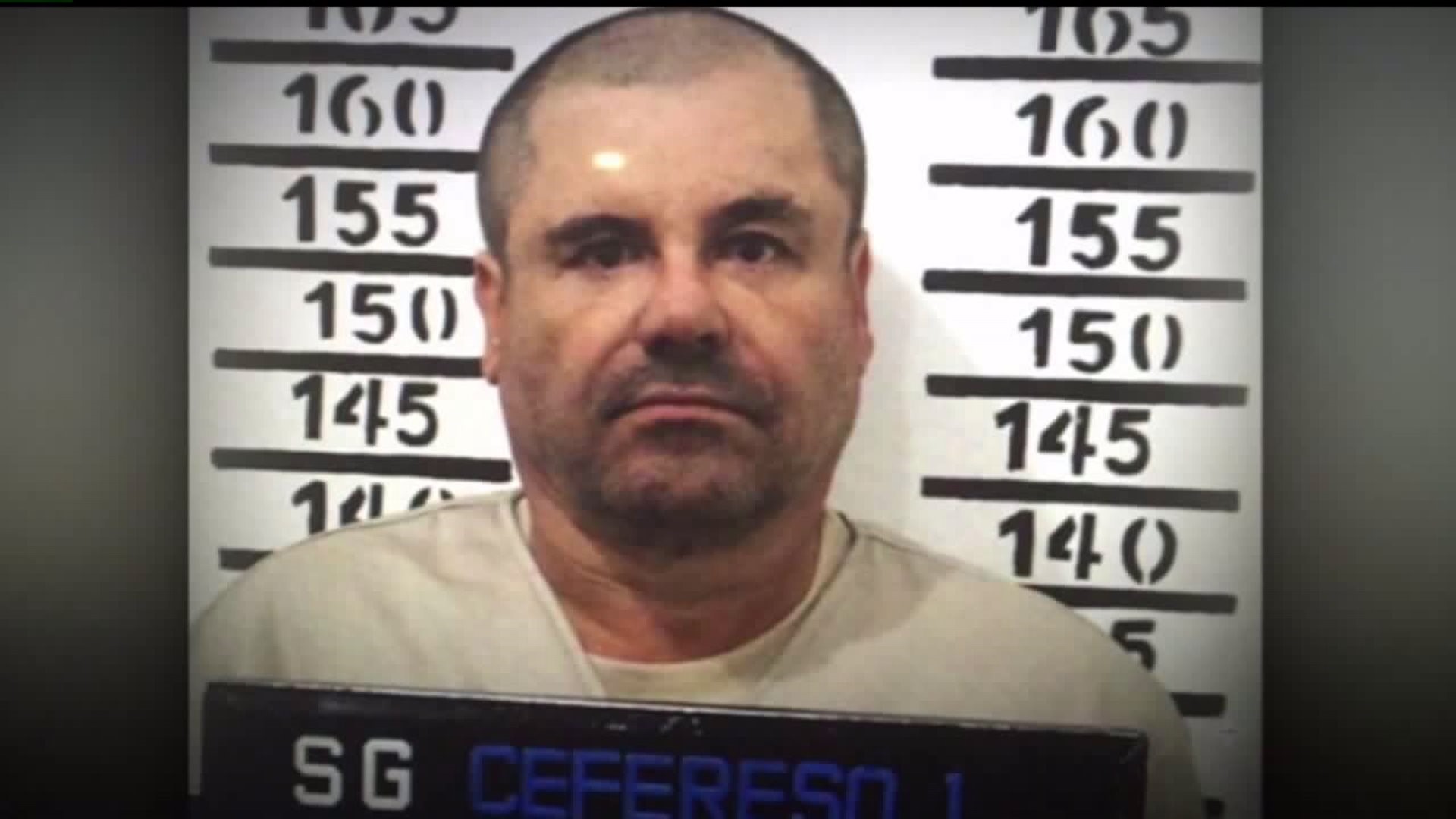 (CNN) -- Mexican drug lord Joaquin "El Chapo" Guzman was sentenced to life in prison plus 30 years and was ordered to pay $12.6 billion in forfeiture on Wednesday in what is likely the last time he's seen in public before he goes to Colorado's Supermax prison.

Guzman, wearing a gray suit and dark tie, spoke for about 10 minutes in court before the sentence was handed down and called out issues with the jury.

"There was no justice here," he said in Spanish, referring to a report that one juror had spoken about misconduct by some other jurors.

El Chapo, who infamously escaped prison twice in Mexico, also slammed the conditions of his incarceration in New York.

"It's been torture, the most inhumane situation I have lived in my entire life," he said. "It has been physical, emotional and mental torture."

The life sentence for Guzman, 62, comes after he was convicted in February of all 10 counts he faced, including engaging in a continuing criminal enterprise, which carried a mandatory term of life in prison, as well as drug trafficking and firearms charges. Prosecutors have called him a "ruthless and bloodthirsty leader" of the Sinaloa cartel.

Witnesses during the trial testified that Guzman ordered and sometimes took part in the torture and murder of perceived cartel enemies.

"The long road that led 'El Chapo' Guzman from the mountains of Sinaloa to the courthouse was paved with death, drugs, and destruction, but it ended today with justice," Assistant Attorney General Brian A. Benczkowski said Wednesday.

Guzman, who has been in isolation for two and a half years, is expected to serve out his sentence in the nation's most secure federal prison in Florence, Colorado.

"He's going to Supermax, I'm sure, in Colorado," defense attorney Jeffrey Lichtman told CNN's "New Day" the day after Guzman was convicted. "No one has ever escaped. It's absolutely impossible. It's not even an issue."

Guzman's history of escaping prison has weighed on prosecutors' minds, both during his trial and after his conviction.

In 2001, Guzman escaped by hiding in a laundry cart. He spent the next 13 years in hiding in and around his home state of Sinaloa.

He was recaptured in 2014, but former associate Damaso Lopez testified during Guzman's trial that he, Guzman's wife and other family stayed in touch with Guzman while he was held in prison in the Mexican city of Altiplano. Lopez testified that Guzman asked for a tunnel to be built directly into his cell.

The mile-long tunnel, complete with electricity and ventilation, was in the works for a month and Lopez learned that Guzman was "hearing noises where he was, those who were excavating (the tunnel) were already underneath."

Guzman's wife, Emma Coronel, arrived at court Wednesday morning for his sentencing before US District Judge Brian Cogan, who presided over his trial. She is not permitted to visit or correspond with Guzman in prison. He is limited to phone calls and visits from certain family members, including his twin 8-year-old daughters.

In court, El Chapo spotted Coronel, blew her a kiss, and tapped his hand on his heart twice while looking at her. She returned the kiss and blew it at him.

During his statement, his voice quivered several times. And as he left the court, he blew his wife two kisses, which she returned, in what may be their final goodbye.

Lichtman, the defense attorney, called the criminal case a "show trial" and said that jurors had lied to the judge about what they were doing during the proceedings, an issue that he said was the best chance for appeal.

He also said that the government's plan to recover $12.6 billion in forfeiture is a fiction.

"When they get to dollar 1, wake me up. Right now, there are zero (dollars). So, I don't know that we're really ever going to see anything with that. It's a fiction," he said.

Attorney Mariel Colon, who has visited Guzman regularly in prison before, during and after his trial, says she is optimistic about his chances on appeal. But if the appeal is not successful, "then (the sentencing) will be the last time the public will see El Chapo," Colon told CNN. "It could be potentially also the last time El Chapo could see his wife."

Even if Guzman files an appeal, it would be unlikely that he would appear in court, Colon said.

In the months since Guzman was convicted by a jury, he has signed away the rights to his name so that Coronel may start an El Chapo-branded clothing line and asked for better conditions at the Manhattan prison where he is being held.

The identities of the jurors who decided his fate have remained anonymous for their own safety. But shortly after the verdict, one juror spoke to Vice News anonymously and alleged a wide range of possible juror misconduct, ranging from following news reports about the trial, which was expressly forbidden, to lying to Cogan about whether they'd been exposed to certain media reports.

Cogan denied Guzman's request for a new trial and a hearing to investigate the claims.

Until he is transferred to the Supermax prison, Guzman remains at the Metropolitan Correction Center, a federal prison in Manhattan. He is able to be visited by members of his legal team any day of the week, and is allowed to receive a phone call from his sister every 15-20 days, Colon said. But once he is transferred to Colorado, attorney visits may be more limited, she said.

"What we've really been discussing more is the appeal," Colon said. "We really need to discuss as much as possible now because we won't get to visit him regularly like now for the appeal."

Since Guzman's third arrest in 2016 -- when he was extradited to the US -- he has been under a tighter watch. He was brought to New York, where he remained through his trial and sentencing.

Security surrounding Guzman's trial was so tight that the Brooklyn Bridge was shut down each week to allow Guzman to be transferred in a motorcade -- complete with a helicopter escort -- from the MCC to the federal courthouse in Brooklyn for his months-long trial.

While Guzman has been held in the US, his communications have been limited to members of his legal team and his sister, with occasional visits from his twin daughters. He is not allowed to meet with his wife. And with his attorneys, he is only allowed to discuss aspects of his case.

Since his conviction, Guzman's legal team has filed requests for better prison conditions at the MCC, where he is kept in solitary confinement 23 hours a day in his 10 x 8 cell. His attorneys say that since he was brought to the US he has spent more than two years without any access to fresh air or natural light, adding that he must sleep with the light on in his cell, conditions that attorneys say are "psychologically scarring." He also asked for two hours of outdoor exercise a week.

Prosecutors have said the only place for outdoor exercise is on the rooftop of the MCC, which is surrounded by tall buildings in lower Manhattan and covered with a protective wire mesh. They raised concerns of possible escape plans by the notorious former drug lord, and cited an attempted 1981 jailbreak from that very spot in which an inmate's associates hijacked a sightseeing helicopter and attempted to cut through the wire screens surrounding the rooftop.

So Colon is trying to prepare Guzman for what conditions will be like at the Colorado prison.

"It's worse than where he is at right now," she said. Colon added that Guzman's isolation from his family will be difficult. "It's sad, it's stressful, it's emotionally heartbreaking," she said.