Muscatine Power and Water wants to reduce their CO2 emissions by 65% by 2030. To do so, they're replacing their coal-fired power plants - but how is the debate. 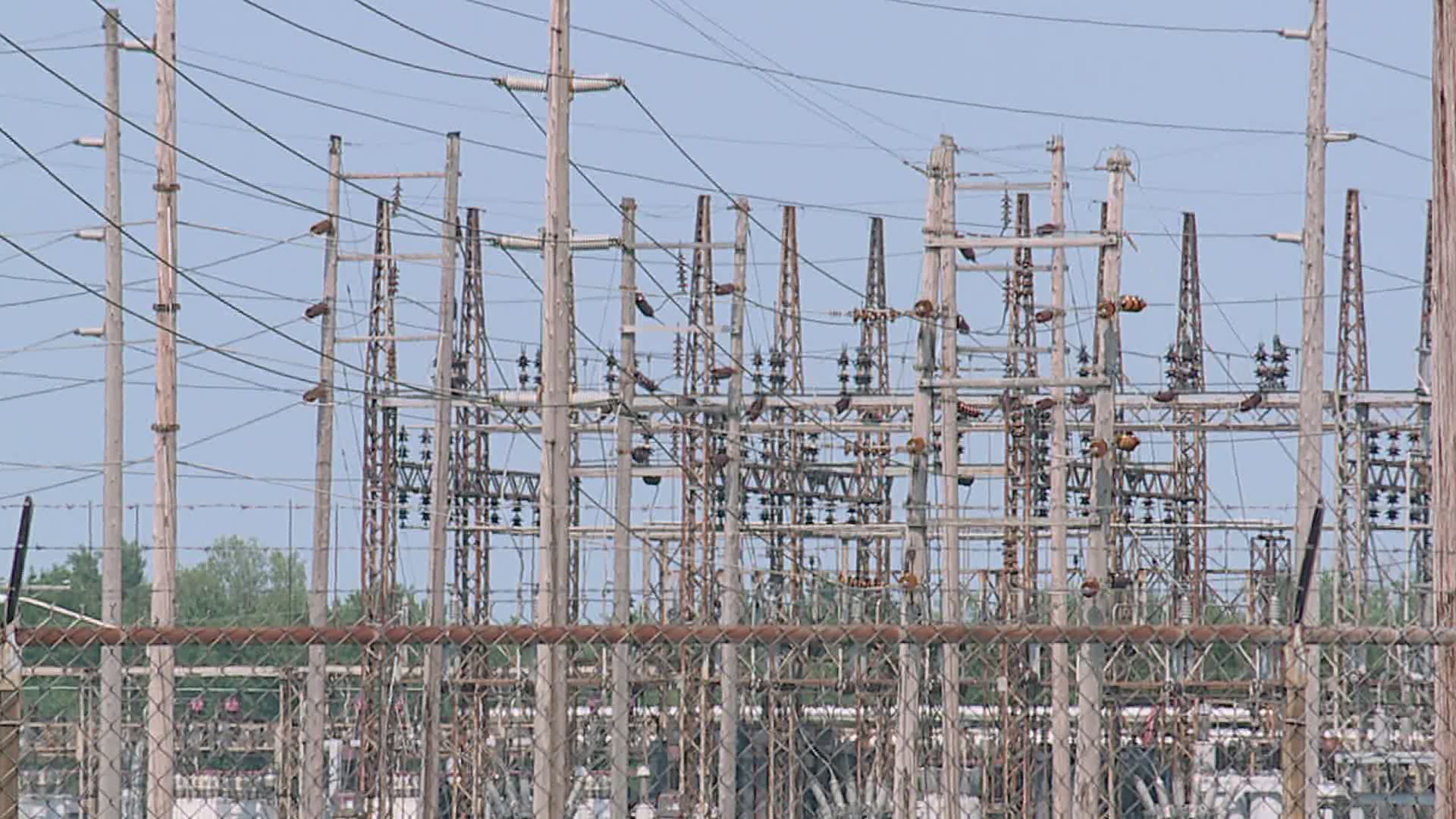 MUSCATINE, Iowa — Muscatine Power and Water (MPW) wants to move from their coal-fired power plant to a natural gas-powered unit. While the move is environmentally cleaner than coal, local environmental groups are asking the municipal organization to do more.

The nonprofit MPW provides water, electricity and communications to about 26,000 people. Since the 1970s, they've generated their electric power through three coal-fired units. But now, the organization is embarking on a several-year initiative they call "Powering the Future." That would include:

Part of the challenge, says MPW, is growing their renewable energy infrastructure at a rate that doesn't outpace falling market prices. Meaning, if they transitioned to entirely renewable energy today, they say the price of that switch would force utility prices to skyrocket.

"When we've evaluated a portfolio that would be 100% renewables, it would roughly double our electric rates," said Gage Huston, General Manager of MPW. "The cost of those renewable options has come down significantly over the last decade. But it's when you look to replace the electric supply entirely with renewables... that's where the cost goes up significantly."

It's the reason MPW is looking towards a natural-gas fired unit. Something Huston says will burn cleaner than coal, while continuing a decades-long partnership.

"Here in Muscatine, we happen to have a customer that has a process steam demand. So we've got a 20-plus year partnership with that customer in operating a combined heat and power system. Because in addition to making electricity with the fuel, you also get some process steam that gets used for an industrial process."

He says a natural gas unit would be able to continue that partnership, as well as keep electricity local and affordable.

The other piece of the equation is MPW's proposed 30MW solar field. Huston says the field where MPW's drinking water facility is located at is the perfect location for a field of that size.

Implementing that many panels by 2023 would allow MPW to double its current renewable energy portfolio from about 5.5% of customer need to nearly 12%.

After whittling down dozens of bidders and over 100 proposals for that new field, MPW now says they've zeroed in on one bid in time for their July 22 deadline.

"One of the key steps in that project is that we need to submit the application for the project to get into a study process. We've now got everything and we're pretty close to having it ready to go," said Huston.

It's that combined effort, of phasing out coal, turning to natural gas, and building renewable infrastructure, that MPW hopes will get them to 65% CO2 emission reduction in the next decade. After that, the organization says they'll rely on customer interest, reliability, affordability, flexibility and sustainability to see what more needs to be done.

"Something we've talked a lot about, as we've started this transition, is when is that potential carbon-free or carbon-neutral point for us," said Huston. "A lot of utilities have put a 2050 target out there to become carbon-neutral. And we think with this plan, that's still a very feasible option."

But for Clean Air Muscatine (CLAM), the move doesn't produce results as quickly as they'd hoped.

"While we were excited about the potential for a solar field, we did have a lot of questions about a [natural gas unit]," said Sandy Stanley, CLAM Board President. "Gas is better than coal, but it's not good for us. I mean, we're going from one fossil fuel to another fossil fuel."

Instead, Stanley and CLAM are asking MPW to look at more renewable energy options, from wind to solar, hydrogen, geothermal and more.

"We're not doing hardly anything with energy efficiency in our community. That's the low hanging fruit there," said Stanley.

She's particularly worried about pouring millions of dollars into a natural gas fired unit if the market projections show such plants declining in use over the next several decades.

The Institute for Energy Economics and Financial Analysis indeed forecasts the United States electrical generation from coal and nuclear to fall from 19% in 2020 to 11% by 2050, and for natural gas production to dip slightly from 40% to 36%.

In contrast, renewable energy portfolios are expected to rise from 21% to 42%.

"A concern of ours here is if they do decide to build a gas plant, that it could be stranded," said Stanley. "Now you're paying for something for 20 years and you're only using it for 10."

MPW is currently investigating different sizing options for the natural gas unit, but high-end ranges for building such a plant would cost around $180 million. For comparison, one of their three coal-fired units was built in the late 70's for what would be around $680 million today, after inflation adjustment.

Huston says MPW still sees a need for a natural gas unit in the future, even as their renewable options potentially grow.

"There's been a lot of research and development that's gone into renewable hydrogen fuel and carbon capture and sequestration options for units. And any gas fired unit that we would put in would have the ability to convert to a new hydrogen unit down the road. So we still see that as a path towards carbon neutrality at some point," he remarked. "If any of our risk factors change, we might have to shift gears."

RELATED: Knee-high by the 4th of July? Why local farmers are glad that's not true

One of MPW's main arguments for gradually transitioning into renewable options is the cost of current technology. It's something that Stanley disagrees with.

"There are a lot of changes coming down in the way of administrations, the EPA, regulations, and President Biden. We think that there are going to be more options in the future, like with battery storage."

With solar energy, there's the issue of the sun going away at night, but electricity demand remaining constant - no matter the time of day. In that case, electricity organizations either have to have other energy sources, or green batteries, capable of storing that energy for when it's needed.

"But a lot of work is being done on batteries and on storage," said Stanley. "The sun is free. Wind is free. You know, gas is not free. And our fear is that if they do go with a gas plant, and they get it started, then you can't stop it."

She says pushing so hard, right now, is necessary because it's easier to start something new than halt and redirect.

"We just see this as an opportunity. That if we don't do something now, we're going to lose it, and nothing is going to happen for [our] lifetimes. We're gonna be stuck with this," implored Stanley. "This is [the community's] opportunity."

"There was a memorandum on restoring trust in government through scientific integrity and evidence-based policymaking. There were several executive orders put through already this year, one on American supply chains, making more resilient an energy sector in order to reestablish the President's Council of Advisors on Science and Technology, tackling the climate crisis at home and abroad in order on protecting public health and the environment and restoring science to tackle the climate crisis, and of course, rejoining the Paris Climate Agreement," said Malik. "So there has been a lot of growth on the federal level already this year to promote renewables and a cleaner future for everybody."

She's been part of an effort to raise signatures petitioning MPW to look at other energy sources, outside of natural gas. In just a few weeks, CLAMs efforts have garnered over 150 signings, both online and in person.

"We would love [MPW] to, if they absolutely cannot move away from fossil fuel completely, to make at an at least majority renewable portfolio," said Malik. "Because that can only help the human race."

Malik is particularly worried about the customer interest aspect of MPW's "Powering the Future" plan.

It relies on consumer buy-in for their Choose Green Muscatine program, where individuals and businesses can request renewable energy at rates of 25-100%, costing a penny per kilowatt (as a resident). That total is then added on to one's energy bill at the end of the month.

"It's a good program! However, it does cost something and that isn't always easy to request from people, especially after 2020," she said. Part of her work has included advocating for the MPW program, to get more people and businesses signed up, to show MPW that there's a desire for it in the community. "Participation doesn't equal interest if it costs money to opt in. So we're trying to do what we can with this to push the program. Because it's important to us."

That importance, she says, won't be going away any time soon.

"The reason why we are here, the reason why we're pushing these things, is because climate change is real. And not only is it real, it's happening," said Malik. "At every point of natural gas transfer, from fracking to manufacturing to burning and everything in between, it's pipelines. And in order for it to be 100% safe, it would have to be 100% airtight. And that's just not possible. It's gonna leak and it's gonna leak CO2. And it's gonna leak methane which breaks down into CO2. It's just going to perpetuate this cycle that we really don't want to perpetuate. We want to break it."

Muscatine Power and Water hosts public board meetings every month, in which they discuss the future transition. To attend, you can find future dates here.

Posted by Muscatine Power and Water on Friday, July 16, 2021