Strange but true: When the Astros drafted QB Ken Stabler

Ken "Snake" Stabler was best known for his performances on the football field, but the Astros took a stab at him in the MLB draft in 1968. 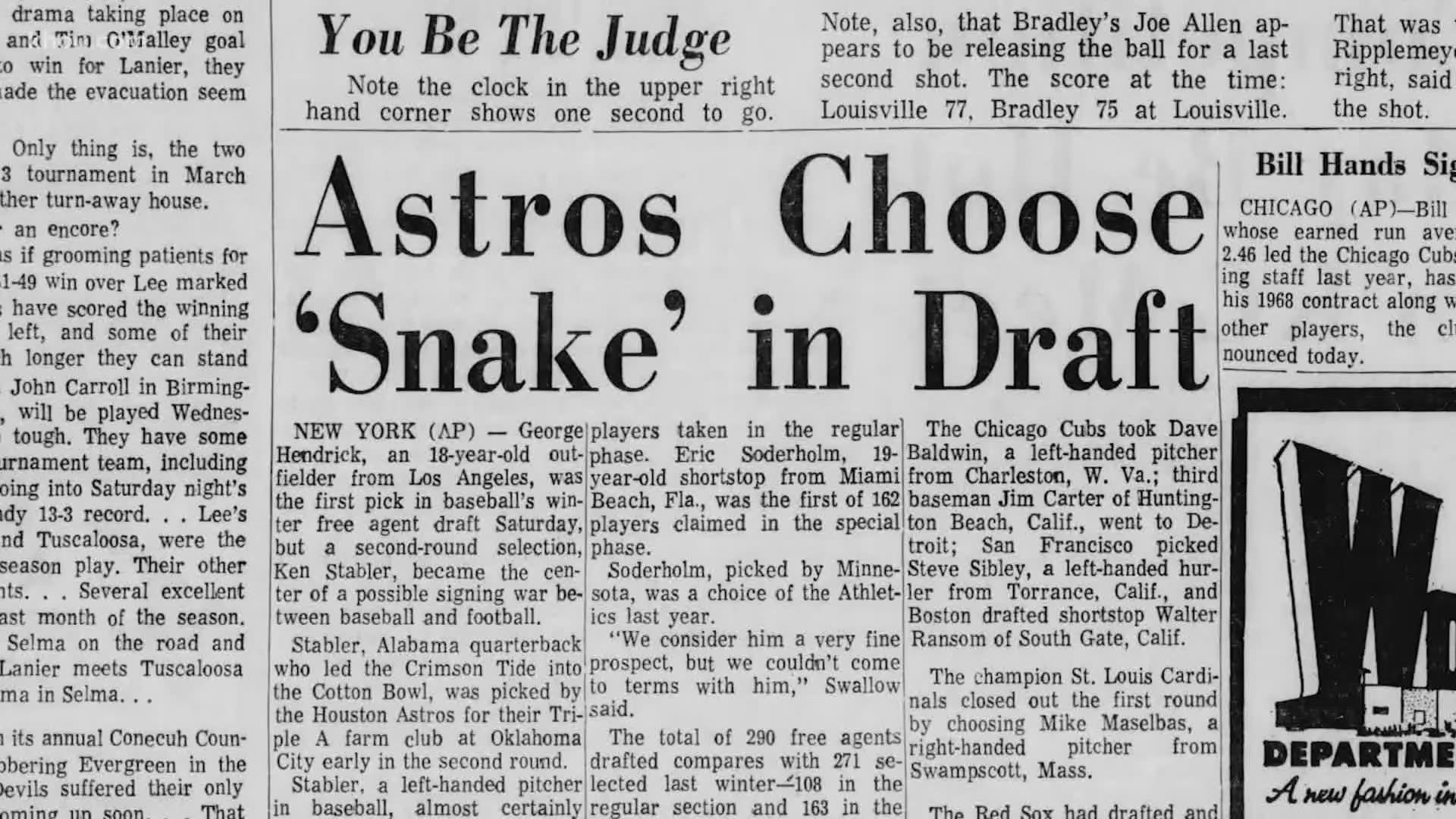 HOUSTON — When the "Snake" joined the Houston Oilers in 1980, he was past his prime. But 12 years earlier, a young Ken Stabler caught the attention of another Houston team, though not as a quarterback.

Stabler, a member of the Pro Football Hall of Fame, was once drafted by the Houston Astros as a left-handed pitcher.

The date was January 27, 1968. It was three days before that year’s pro football draft.

"I will just wait and see how things go in the football draft before deciding what to do," Stabler said at that time, according to the Associated Press.

He was 22, Alabama's star quarterback and was nicknamed Snake for his running ability.

But baseball teams kept calling. Stabler had been drafted twice before, by the New York Yankees and New York Mets, even though he hardly pitched since high school.

In the NFL-AFL draft, Stabler was chosen by the Oakland Raiders in the second round. He, of course, chose football and the rest is history.

Credit: AP
FILE - In this Dec. 27, 1976, file photo, Oakland Raiders quarterback Ken Stabler, who was sidelined in the second half, gestures during the AFC championship NFL football game in Oakland, Calif. The only thing missing when Stabler is inducted into the Hall of Fame on Aug. 6, 2016, will be Stabler himself. (AP Photo/File)

How close was he to joining the Astros?

Not very, recalls Tal Smith, who oversaw the Houston Astros' farm system in 1968 as director of player personnel.

"I can't really say we had the great intention of signing him, but you've got nothing to lose," Smith recently told KHOU 11's Jason Bristol. "A scout submitted his name and he was the only other guy on the list so we drafted him."

Credit: ASSOCIATED PRESS
Houston Oilers quarterback Ken Stabler fields a question while head coach Ed Biles apparently enjoys the response of the veteran during a press conference, Aug. 27, 1981 at the Oilers' offices in Houston. Stabler had planned to retire from football this season until his replacement Gifford Nielsen was injured last weekend. (AP Photo/F. Carter Smith)

That's the tale behind the Snake once being drafted by the Astros, another strange but true Houston sports story.

RELATED: Strange but true: Houston Oilers penalized for too many men on team in 1973