Ferentz: Locker room environment 'unworkable for everyone' with strength and conditioning coach around 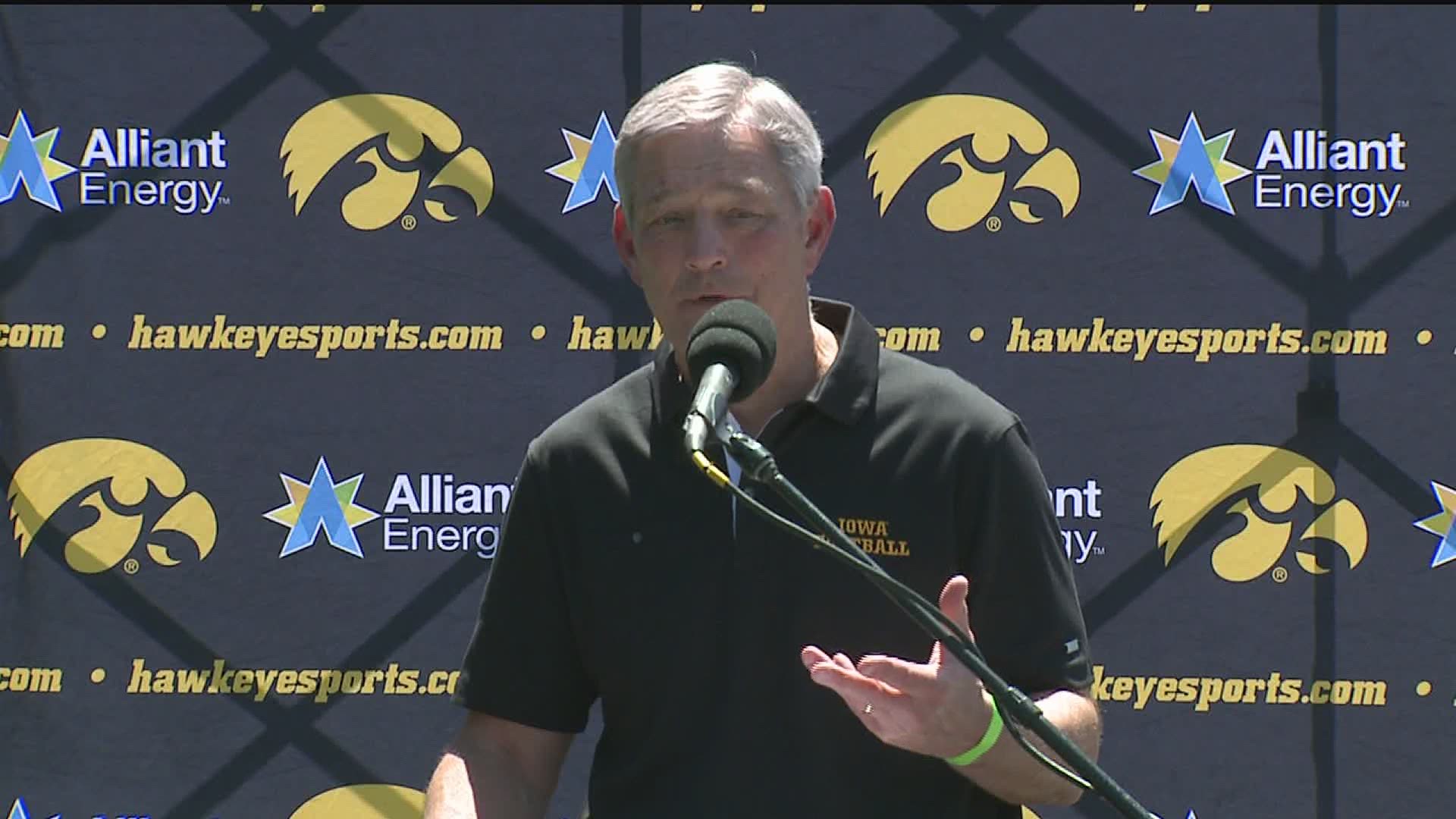 IOWA CITY, Iowa — University of Iowa head football coach Kirk Ferentz held a press conference Thursday to discuss how the Hawkeyes are addressing what he called "racial disaparities" within the program.

Strength and conditioning coach Chris Doyle was placed on administrative leave after many former black football players at the school described what they called "racial disparities" in the program.

Ferentz declined to officially comment on Doyle "out of respect for the process," but said he believed putting him in the locker room wasn't a workable environment for anyone involved.

Kelly-Martin told press he felt the toxicity some of his former teammates felt, saying it felt like "walking on eggshells." He says there was always a pressure to watch their backs, and that players often felt they couldn't voice their opinions or be themselves in the locker room.

Credit: AP
Iowa running back Ivory Kelly-Martin speaks during a news conference, Friday, June 12, 2020, in Iowa City, Iowa. The Iowa football team took a big step toward improving its lines of communication in the week since the program was hit with allegations of systemic racism, coach Kirk Ferentz and three of his players said Friday. (AP Photo/Charlie Neibergall)

Kelly-Martin said he believes everything that's going on in the country right now, from the killing to George Floyd to the people's response, has provided a change of mindset within the Iowa football program and across the nation.

Ferentz also said that anyone who leaves the university with bad experience in the football program is not only a failure on the program's part, but a failure on his part as the team's head coach.

Duncan said it's unfair to place all the blame on Ferentz for anything that happens.  He believes the players can also be doing more to speak up and stop bad things from happening, because they make up the vast majority of the program.

Credit: AP
Iowa kicker Keith Duncan speaks during a news conference, Friday, June 12, 2020, in Iowa City, Iowa. The Iowa football team took a big step toward improving its lines of communication in the week since the program was hit with allegations of systemic racism, coach Kirk Ferentz and three of his players said Friday. (AP Photo/Charlie Neibergall)

Merriweather said any step or movement they decide to make as a team, such as kneeling for the national anthem, is expected to be accepted by the fan base.

Ferentz said he and the players will be together for any decision they make regarding the national anthem, regardless of what the public thinks.

The team held a pair of meetings on Monday and Tuesday regarding the racial disparities within the program. Duncan has been a Hawkeye for four years, and he says the locker room is more connected now after the meetings than it's ever been in his time there.

The Hawkeyes also announced an advisory committee that will "share without judgement" to listen to current and former players and examine the program's conduct and policies.

11 former players from over the last 20 years and beyond will make up that advisory committee.  Those 11 have been determined, but their names have not been released yet.  Ferentz said they're working on getting the list out to the public as soon as possible.

RELATED: Kirk Ferentz aims to change culture of Hawkeye football after former players speak out about racial disparities in the program