Opening day, a lost season, and pushing on even without any fans: Modern Woodmen's longest-serving employees reflect

The last time the River Bandits played at Modern Woodmen was back in September of 2019, making Tuesday's opening night a long time coming for two staff members. 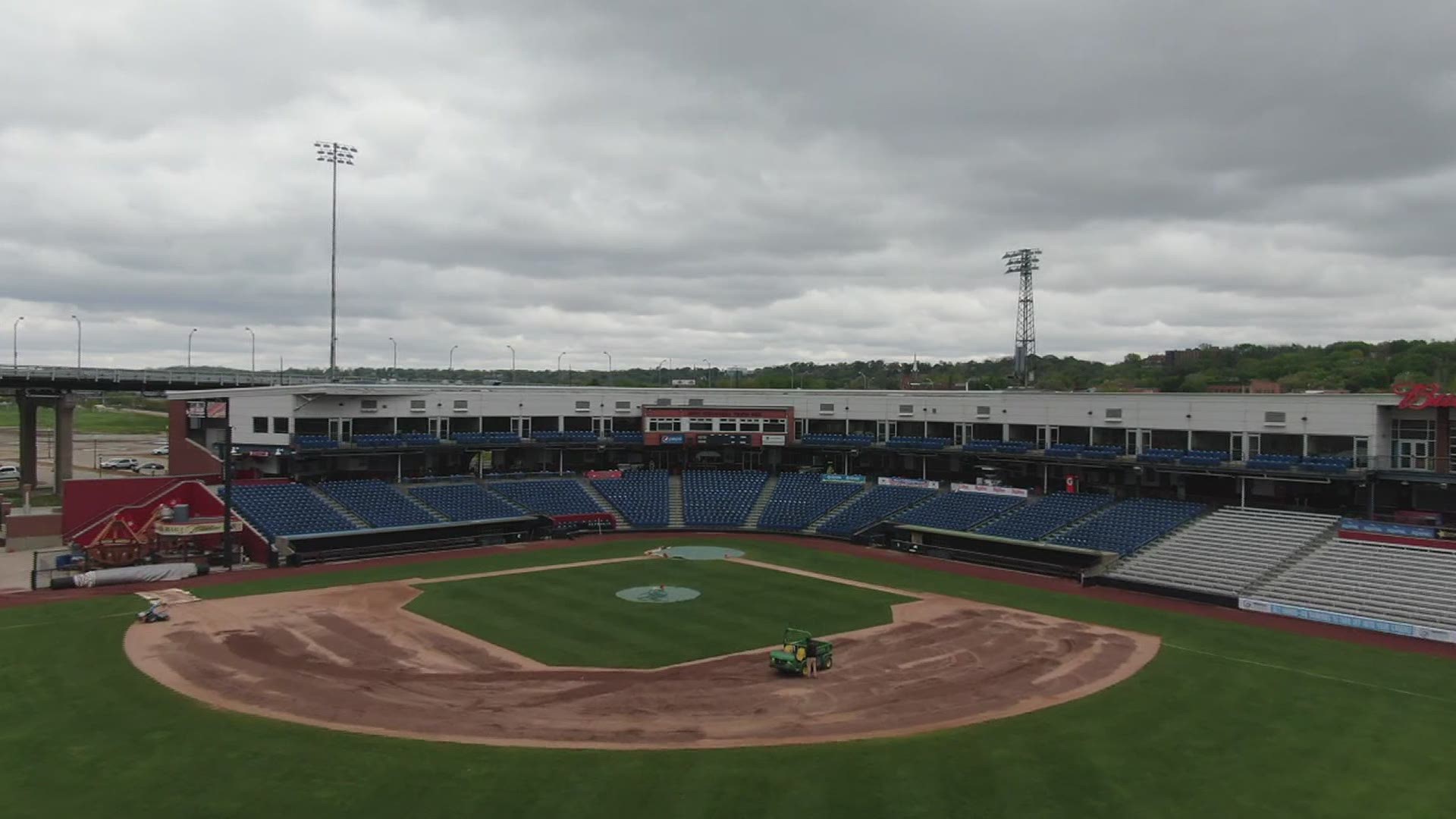 DAVENPORT, Iowa — When the first pitch is thrown at Modern Woodmen around 6:30pm on Tuesday, May 11th, it will have been nearly 20 months since the last time a game was played in the park.

Back in September of 2019, the park staff couldn't have guessed they wouldn't see fans in the stands again for almost two years. Instead, their sights were set on the 2020 season. And by all calculations, it was set to be one of their biggest years yet.

"Going into last year, we had everything ready to go. We had probably our best promotional schedual going into 2020," said Shawn Brown, Vice President of Sales at Modern Woodmen. "2020 was supposed to be our best year ever. We had a new general manager, new assistant general manager, and some new staff. And once we were ready to release everything, it kind of stopped there."

Brown holds a coveted title at the park. After twelve seasons with the River Bandits, he's now the longest-serving employee at Modern Woodmen. Over the years he's seen floods, 'five or six' general managers, and his fair share of wins and losses. But nothing could have prepared him for what Covid-19 would bring.

"I thought dealing with the flood in 2019 was tough... but no, last year was probably the toughest," he laughed. "But it's only going to make us better, that's for sure."

Brown can typically be found on the phone, sending emails, and talking to sponsors. He says the combination of Quad City fans, sponsors, and staff are what's kept him around at Modern Woodmen, in a career field where most spend a few years with the River Bandits and then move on to a different field and team.

"It's not work, it's not a job, it's just a great place to come and have my career. It's been great," he explains.

But not all of it has been great.

Brown says when the pandemic first hit, the entire staff kept waiting to see which week would lead to their re-opening, believing - like most of the world - that the virus wouldn't cancel their entire year.

"It's been rough, probably like everybody's experienced. It was sad because we couldn't see our fans and couldn't work with our sponsors on a day to day basis like we usually would. It was tough," he said. "We couldn't stop what we were doing because we had to be ready. We kept pushing on and on."

Now, headed into the home opener of the 2021 season, Brown says the normally palpable buzz surrounding opening day is ramped up, and the staff is more excited than ever.

And in order to get ready for that all-so-special opening day, Brown says much of the credit needs to go to the other longest-serving employee: Seth Reeve.

Reeve has been with the River Bandits for eight seasons, starting as an intern and now working as the Assistant General Manager of Ballpark Operations.

"I don't think there's really such a thing as a normal day for me," he joked. "I always say I could put together a two page to-do list before I get into work and then all it takes is one pipe to break or one issue coming up and then I throw the entire document away."

Modern Woodmen is, after all, a 90 year old park. Things tend to break down, even while the fans are staying at home.

It's rare to ever spot Reeve in a suit - the veteran much more comfortable getting his hands dirty mowing the infield, repainting walls, or fixing odds and ends around the park. And during the unexpectedly long off season that became the year 2020, he kept as busy as ever: replacing the park's scoreboards, patching an entire warehouse, and putting up all new sponsorship wall paddings in the outfield.

"I guess the only good thing - if you could say it's a good thing - about not having a season in 2020 is I got a lot of projects done that I don't think I could have normally finished," laughed Reeve. "The wall padding was big for me, I'd been trying to push for that for about seven years, so that's exciting!"

And after all that hard work, he says this year's opening day will be bigger and better than ever.

When asked if he ever plans on moving on from Modern Woodmen, Reeve just smiled and shook his head. As a Midwesterner born and raised, he says working in Davenport feels right.

"I'm here. I am the Quad Cities River Bandits. Or I feel like I am, cause I've been here so long," he said. "I was never gonna go anywhere, I'm here for the long haul and I want to see this project - this facility - through. I wanna see my to-do list through."

And with opening day approaching, he says having that taste of 'normalcy' back is what he and the staff, as well as the entire Quad Cities, needs.

"After being gone for two years almost and being able to reopen those gates... having the Kansas City Royals affiliation and their players out on that ballpark again, it's gonna be really, really exciting to hear the roaring of the crowd."

Although he admits he probably won't be there to see the opening pitch, since he'll inevitably find something to work on.