Texas voters are split when asked about reelecting the president, and Joe Biden and Beto O'Rourke are their favorites for the Democratic nomination to challenge him, 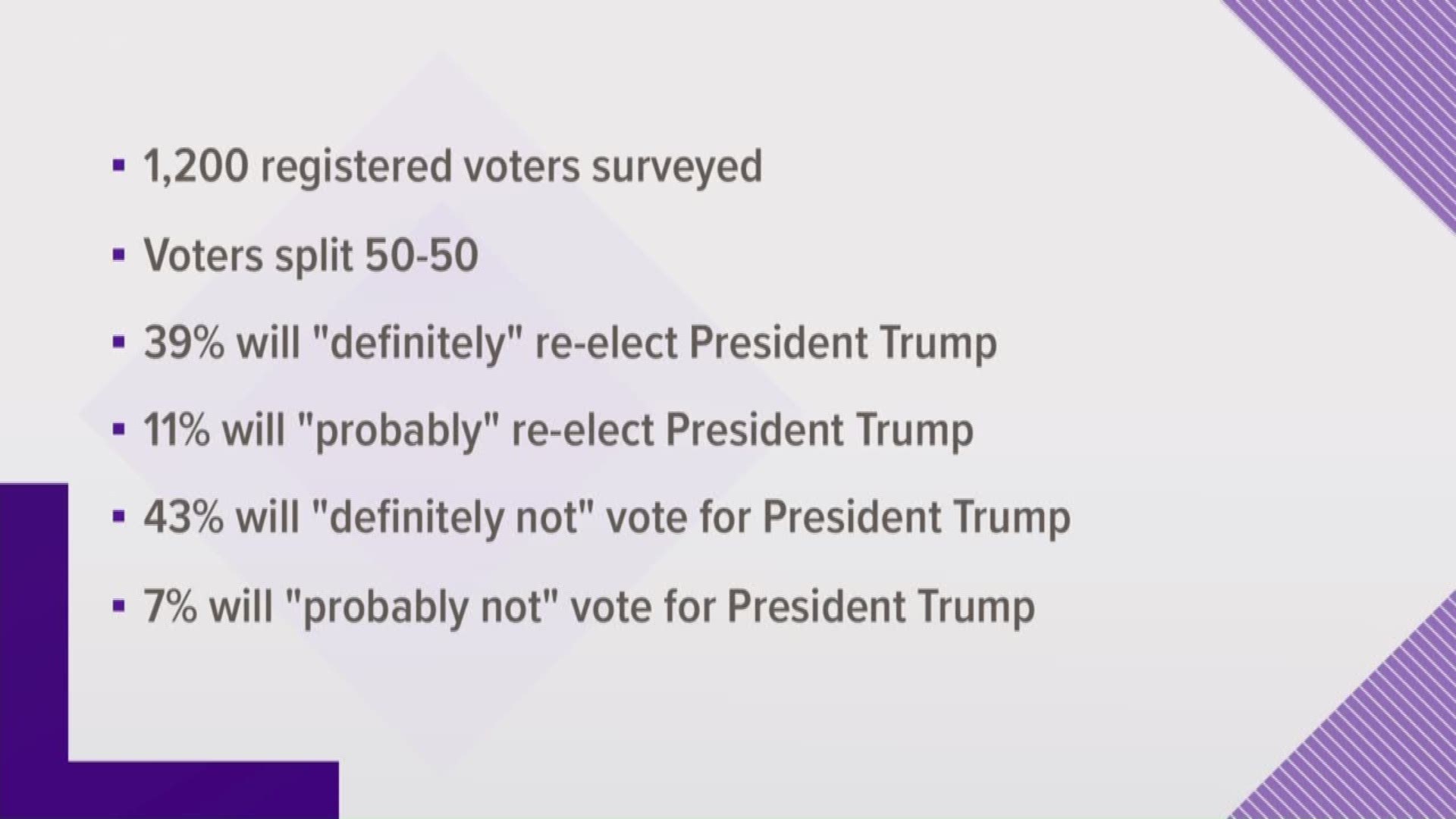 THE TEXAS TRIBUNE – Half of the registered voters in Texas would vote to reelect President Donald Trump, but half of them would not, according to the latest University of Texas/Texas Tribune Poll.

“That 50-50 number encapsulates how divisive Trump is,” said James Henson, who runs the Texas Politics Project at the University of Texas at Austin and co-directs the poll. But, he added, the number is not necessarily “a useful prediction for an election that’s 16 months away.”

Among Republicans, 73% would “definitely” vote for Trump; among Democrats, 85% were “definitely not” voting for another term.

“This squarely focuses on Trump,” said Daron Shaw, professor of government at the University of Texas at Austin and co-director of the poll. However, he said, “it isn’t a matchup with a flesh-and-blood Democrat. It shows Trump’s relative weakness, compared to a generic Democrat in this state.”

Independents were less emphatic than either the Republicans or the Democrats, but 60% said they wouldn’t vote for the president in an election held today, including 45% who would “definitely not” vote for him.

“The most interesting and more consequential thing, this far out, is that amongst independents, 60% say they will probably or definitely vote for somebody else,” said Joshua Blank, manager of polling and research for the Texas Politics Project. “Overall, Texas independents tend to be more conservative than liberal and tend to look more like Republicans than like Democrats ... and things have gotten worse among independents.”

Republican candidates' narrow margins of victory in many statewide races in 2018 could bring those independent voters into the spotlight.

“As the state becomes more competitive along partisan lines, at the same time it remains polarized, independents matter more,” Henson said. “For a long time, we didn’t have any reason to pay attention to them.”

Trump asks if Americans will 'demand' he stay after two terms

Who is running for president in 2020?

What about the Democratic candidates? Only four have double-digit support among Democratic voters with almost nine months to go before the Texas primaries: former Vice President Joe Biden (23%), former U.S. Rep. Beto O’Rourke of Texas (15%), and U.S. Sens. Elizabeth Warren of Massachusetts (14%) and Bernie Sanders of Vermont (12%). And only four others have the support of more than 1% of the Democratic voters: South Bend, Indiana, Mayor Pete Buttigieg (8%); U.S. Sen. Kamala Harris of California (5%); former Housing and Urban Development Secretary Julián Castro of Texas (3%); and U.S. Rep. Tulsi Gabbard of Hawaii (3%).

Both men and women put Biden in first place, but among women, O’Rourke and Warren are tied for second. Among men, Sanders is the second favorite, edging out O’Rourke. Biden has strong support among black voters (34%), with O’Rourke in second (18%). Those two finish in a dead heat among Hispanic voters (18%), followed by Sanders (12%) and Castro (9%).

The presidential race has been bumpy, so far, for the two Texans seeking the nomination.

“After four months of campaigning, Castro’s numbers remain unchanged in Texas,” Blank said. “And the top five candidates have 75% of the vote in Texas.”

O’Rourke’s Texas numbers are good after a vigorous Senate campaign in 2018 — he’s in that top tier among the Democratic contenders here. But he’s having a harder time elsewhere. “Running successfully in Texas in 2018 is not the same as running well in a national race,” Henson said.

O’Rourke is by far the better known of the two, a recognition that comes with a double-edged sword: More Texas voters know him, and while 42% have a favorable opinion of him, almost half (46%) have an unfavorable opinion of last year’s candidate for U.S. Senate.

Castro, a former San Antonio mayor, has never run a statewide race, and it shows in his numbers: 26% of Texans have a favorable opinion of him, 33% have an unfavorable impression, and 41% have either a neutral opinion of him or no opinion at all.

The poll also asked voters whether they have heard of 23 people who are seeking the Democratic Party’s 2020 presidential nomination. Ten of them were known to more than 50% of Texas registered voters: Biden, O’Rourke, Sanders, Warren, Harris, U.S. Sen. Cory Booker of New Jersey, Castro, Buttigieg, New York City Mayor Bill de Blasio and U.S. Sen. Kirsten Gillibrand of New York. Only one of the candidates — Miramar, Florida, Mayor Wayne Messam — was known to less than 10% of the registered voters.

Disclosure: The University of Texas at Austin has been a financial supporter of The Texas Tribune, a nonprofit, nonpartisan news organization that is funded in part by donations from members, foundations and corporate sponsors. Financial supporters play no role in the Tribune's journalism. Find a complete list of them here.

This article originally appeared in The Texas Tribune, here.

WATCH: Biden ahead of Trump in new 2020 race poll

The Texas Tribune is a nonprofit, nonpartisan media organization that informs Texans — and engages with them — about public policy, politics, government and statewide issues.

'If you hurt her, I'll kill you.' Austin's El Arroyo chimes in on Whataburger acquisition