The transgender athlete ban requires athletes to compete on teams determined by the biological sex recorded on their birth certificate. 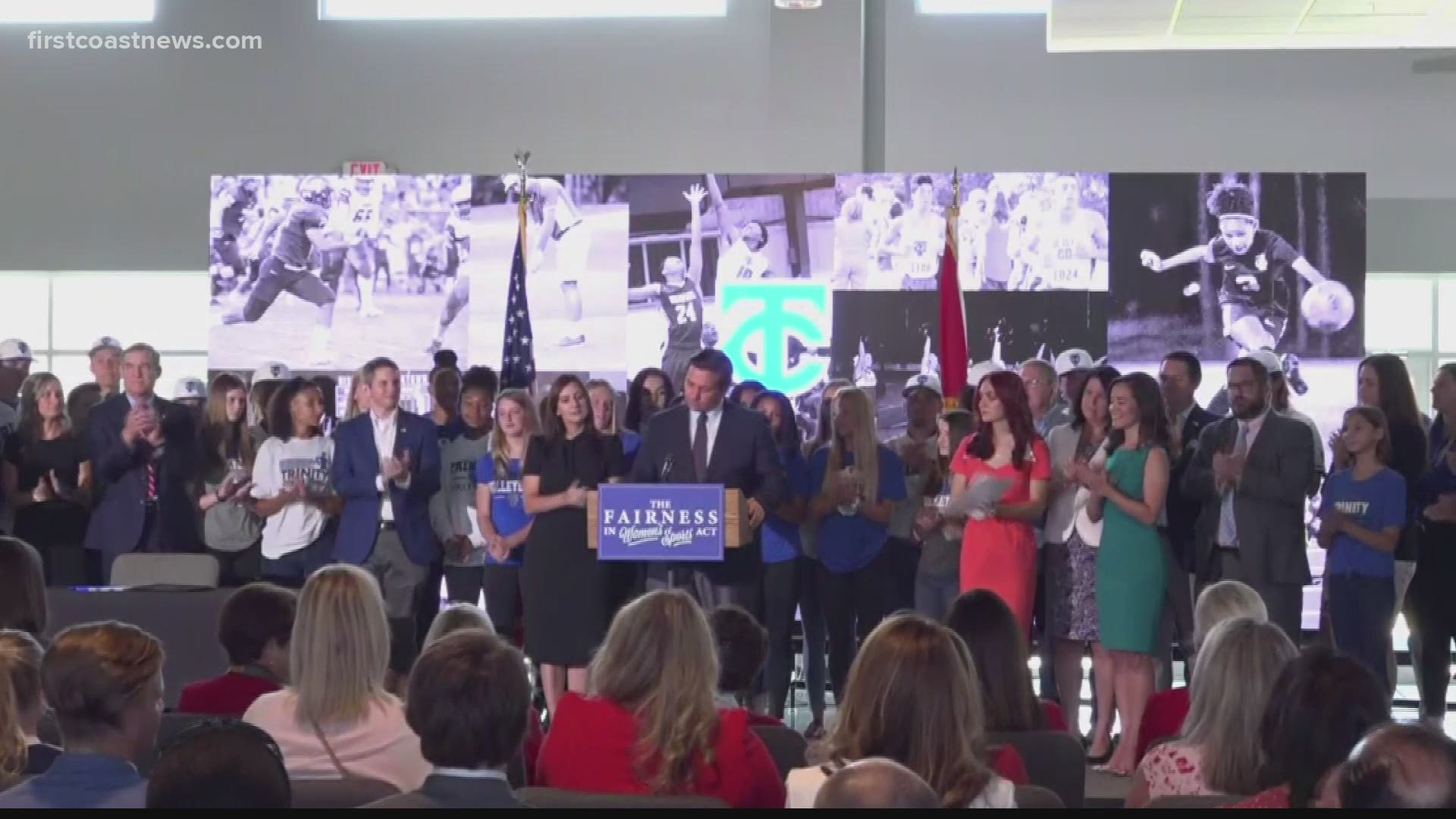 “We believe in the state of Florida in protecting the fairness and the integrity of women’s athletics," DeSantis said. “It’s taken many of our girls to college to be able to get an education and to compete, so we believe that it’s very important that the integrity of those competitions are preserved, that these opportunities are protected. And I can tell you this – in Florida, girls are going to play girls’ sports and boys are going to play boys’ sports.”

The governor started with talking about how Florida is very competitive in all sports, which presents great opportunities to athletes statewide. But, he said transgender athletes competing in women’s sports threatens the opportunities that can be presented to women.

DeSantis stated the only way to compete in women’s sports, is to prove one’s gender with an original birth certificate.

“We’re going to go based on biology, not based on ideology when it comes to sports,” DeSantis said.

The governor's remarks, coming on the first day of LGBT Pride Month, follow the bill's passage by the state legislature in April. The transgender athlete ban requires athletes to compete on teams determined by the biological sex recorded on their birth certificate.

LGBT rights advocates have voiced their disapproval of the controversial bill, now signed into law by the governor. Equality Florida criticized Republican lawmakers, saying they're "hell-bent on attacking LGBTQ kids."

To hit his message home, the governor invited Selina Soule to speak. Soule is a former Connecticut track athlete who says she missed the opportunity to advance to the next level in her sport by two slots. Two of those slots were filled by transgender athletes, she says.

“Those two biological males would dominate the field leaving us girls to compete for third place and beyond,” Sole said.

“This bill attacked our most at-risk and binary populations […] our youth,” said Gina Duncan, director of transgender equality with Equality Florida.

Alphanso David, President of The Human Rights Campaign, said he and others are ready to fight back.

“DeSantis went one step further and slapped our community in the face, signing this law on the first day of Pride Month,” David said “We are going to legally challenge this law. We are going to sue the state of Florida in court.”

First Coast News also spoke with the communications director for the state's LGBTQ+ Democratic Caucus, Phillip Perry, who tells us, "It seems almost like the cruelty is the point at this point," referring to the timing of Gov. DeSantis' signature. June 1st is the start of Pride month.

Perry also explained, "At the end of the day, it's going to keep young people who may want to participate in team sports from playing.  We should let kids play.  Let them be themselves."

There is sure to be a lot of additional challenge to this legislation in the future.

The NCAA has threatened in the past to relocate key athletic events from states that discriminate against certain athletes. DeSantis said, it’s a risk he’s willing to take.

“We won’t be cowed, we will stand strong,” DeSantis said. “I will choose to protect our young girls everyday of the week and twice on Sunday.”

"By signing a heartless ban on transgender kids in sports, @GovRonDeSantis is marginalizing an entire community," Agriculture & Consumer Services Commissioner Nikki Fried tweeted. "Signing it on the first day of #Pride2021 is especially cruel. Florida should stand for inclusivity, equality, and liberty -- not peddling hate for political points."

By signing a heartless ban on transgender kids in sports, @GovRonDeSantis is marginalizing an entire community.

Signing it on the first day of #Pride2021 is especially cruel.

Florida should stand for inclusivity, equality, and liberty — not peddling hate for political points.

State lawmakers were unable to cite an instance when interviewed by the Miami Herald where a transgender athlete unfairly impacted scholastic athletic competition in Florida.

The law is set to go into effect July 1.

First Coast News will continue to update this developing story.