‘You’re a damn liar’: Biden has heated exchange at campaign event in Iowa

Joe Biden grew visibly frustrated Thursday calling an audience member a liar and challenging him to a push-up contest when the man asked about his son and said ... 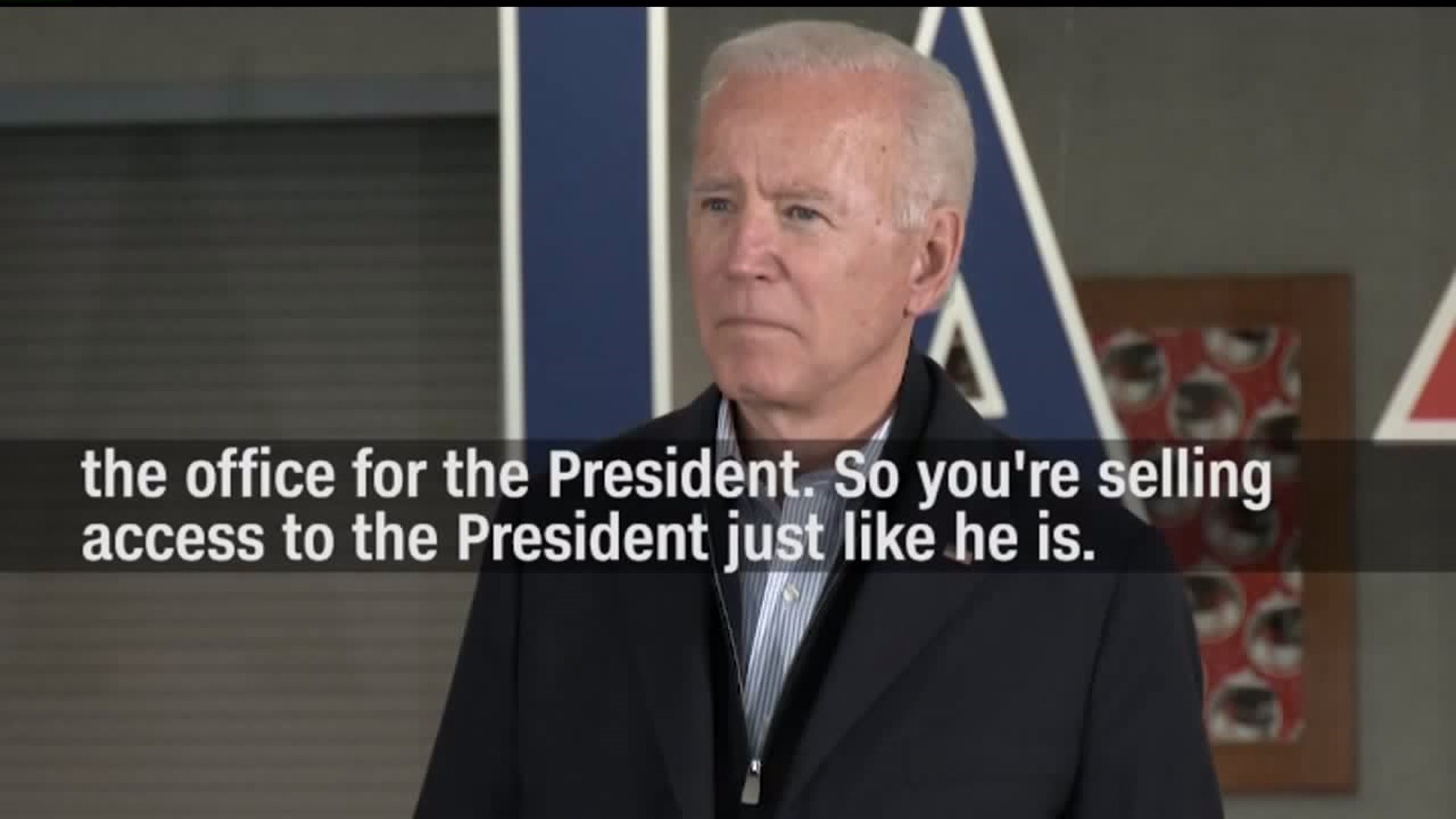 (CNN) -- Joe Biden grew visibly frustrated with an audience member at a campaign event on Thursday, calling the man a liar and challenging him to a push-up contest when the man asked about his son and said the former vice president was too old.

The audience member, who asked the question during a stop on Biden's Iowa bus tour in New Hampton, accused Biden of "selling access to the President," referring to Biden's son, Hunter, who served on the board of a Ukrainian gas company while his father was vice president.

Hunter Biden said recently he used "poor judgment" in serving on the board while his father was pushing anti-corruption measures in Ukraine on behalf of the US government, but added that he didn't do anything improper.

"You're a damn liar, man, that's not true," Biden responded. "No one has ever said that, no one has proved that."
There is no evidence of wrongdoing by either Joe or Hunter Biden.

The man accused Biden of sending his "son over there, to get a job and work for a gas company, that he had no experience with gas, nothing."

"You're a damn liar, man, that's not true," Biden responded. "And no one has ever said that, no one has proved that."

After the man pushed back again, Biden replied, "You said I set up my son to work for an oil company, isn't that what you said? Get your words straight, Jack!"

The terse exchange ended with the man saying he wouldn't vote for Biden, who replied that he knew he wouldn't. Biden called the voter "too old" to vote for him.

"Well, I knew you weren't, man. You think I thought you'd stand up and vote for me. You're too old to vote for me," said Biden.

The man, a retired farmer who refused to provide his name to reporters, told Biden at the end of the exchange, "It looks like you don't have any more backbone than Trump has" as the audience audibly groaned.

Asked by CNN's Jessica Dean if he finds himself getting frustrated having to repeatedly address the allegations against Hunter, Biden replied that there is a "competing instinct."

"I have overwhelming respect and love for my son and I find myself occasionally getting frustrated at assertions being made that just are simply not accurate... but as my son would say -- 'Dad just keep your cool, just don't let it get to you.' And I'm not -- I'm just not going to let myself respond to the kind of assertions Trump is making because that's just playing into his game," Biden said.

He downplayed the exchange, denying having lost his temper with the audience member and said instead that all he wanted to do was "shut it down." Biden acknowledged that the general election will be "meaner" in terms of attacks on his family.

"I was kidding," Biden said during a gaggle afterward.

"He turned around, he said, 'Look, you're too old,' and he was talking about me and I tried to joke him and said, you wanna do push ups? Wanna run? Let's see what you do.. Wanna take any tests? I mean, and then he went at me again and I said you're too old to vote anyway for me."