Speaking at a Cabinet meeting, Trump said of a possible shutdown: “I don’t think it’s going to happen.” 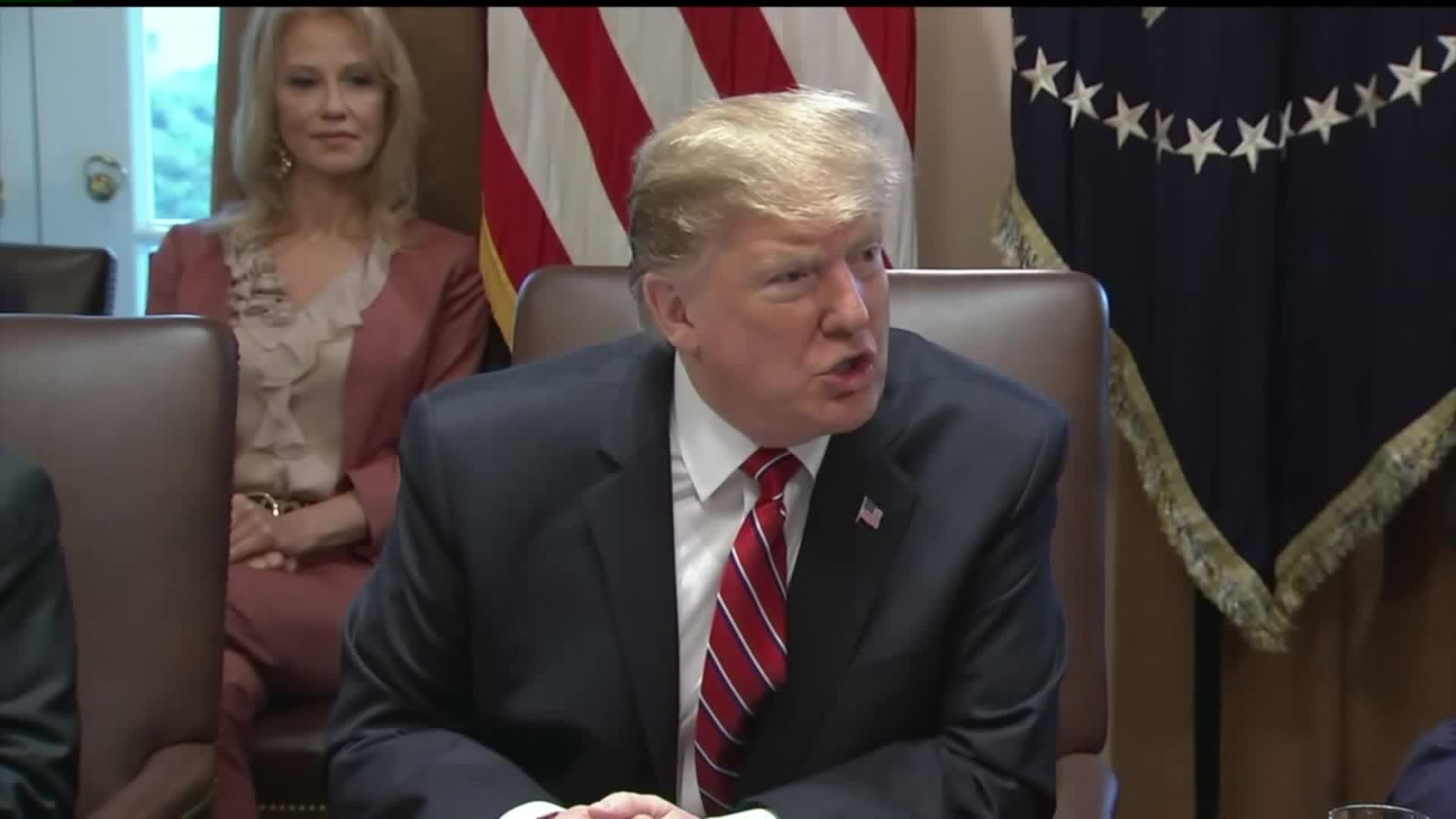 WASHINGTON (AP) — Under mounting pressure from his own party, President Donald Trump appeared to be grudgingly leaning toward accepting an agreement that would head off a threatened second government shutdown but provide just a fraction of the money he's been demanding for his Mexican border wall.

Trump said Tuesday he would need more time to study the plan, but he also declared he was not expecting another shutdown this weekend when funding for parts of the government would run out. He strongly signaled he planned to scrounge up additional dollars for the wall by raiding other federal coffers to deliver on the signature promise of his presidential campaign.

"I can't say I'm happy. I can't say I'm thrilled," Trump said of the proposed deal. "But the wall is getting built, regardless. It doesn't matter because we're doing other things beyond what we're talking about here."

Trump sounded more conciliatory in a Tuesday night tweet, thanking "all Republicans for the work you have done in dealing with the Radical Left on Border Security."

Accepting the deal, worked out by congressional negotiators from both parties, would be a disappointment for a president who has repeatedly insisted he needs $5.7 billion for a barrier along the U.S.-Mexico border, saying the project is paramount for national security. Trump turned down a similar deal in December, forcing the 35-day partial shutdown that left hundreds of thousands of federal workers without paychecks and Republicans reeling. There is little appetite in Washington for a repeat.

Lawmakers tentatively agreed Monday night to a deal that would provide nearly $1.4 billion for border barriers and keep the government funded for the rest of the fiscal year, which ends on Sept. 30.

The agreement would allow 55 miles (88 kilometers) of new fencing — constructed using existing designs such as metal slats— but far less than the 215 miles (345 kilometers) the White House demanded in December. The fencing would be built in Texas' Rio Grande Valley.

Full details were not expected to be released until Wednesday as lawmakers worked to translate their verbal agreement into legislation. But Republican leaders urged Trump to sign on.

"I hope he signs the bill," said Senate Majority Leader Mitch McConnell, who joined other GOP leaders in selling it as a necessary compromise that represented a major concession from Democrats.

Appropriations Committee Chairman Richard Shelby, R-Ala., expressed optimism Trump would be on board.

"We believe from our dealings with them and the latitude they've given us, they will support it," he said. "We certainly hope so."

Others were less upbeat. Sen. John Cornyn, R-Texas, who traveled with the president to a rally in Cornyn's home state Monday night, said, "My impression flying back with him from El Paso last night is that he thinks it's pretty thin gruel."

A presidential rejection of the deal could plunge Congress into a new crisis, as lawmakers have no clear Plan B. They need to pass some kind of funding bill to avoid another shutdown at midnight Friday and have worked to avoid turning to another short-term bill that would only prolong the border debate.

Speaking at a Cabinet meeting, Trump said of a possible shutdown: "I don't think it's going to happen."

Still, he made clear that, if he does sign on to the deal, he is strongly considering supplementing it by moving money from what he described as less important areas of government.

That could be more difficult than he made it sound, facing challenges in Congress or federal court or both.

The White House has long been laying the groundwork for Trump to use executive action to bypass Congress and divert money into wall construction. He could declare a national emergency or invoke other executive authority to tap funds including money set aside for military construction, disaster relief and counterdrug efforts.

Previewing that strategy last week, acting White House Chief of Staff Mick Mulvaney said, "We'll take as much money as you can give us, and then we will go off and find the money someplace else — legally — in order to secure that southern barrier." He said more than $5.7 billion in available funds had been identified.

McConnell, who had previously said he was troubled by the concept of declaring a national emergency, said Tuesday that Trump "ought to feel free to use whatever tools he can legally use to enhance his effort to secure the border."

The framework now under consideration contains plenty to anger lawmakers on both the right and left — more border fencing than many Democrats would like and too little for conservative Republicans — but its authors praised it as a genuine compromise that would keep the government open and allow everyone to move on.

Trump was briefed on the plan Tuesday by Shelby and sounded more optimistic after the meeting. "Looking over all aspects knowing that this will be hooked up with lots of money from other sources," he tweeted, adding, "Regardless of Wall money, it is being built as we speak!"

A Senate aide, who spoke on condition of anonymity because the aide was not authorized to describe the conversation by name, said the senator told Trump the wall money in the agreement was a down payment. Shelby did not ask whether Trump would sign the measure, but Trump told him he would study it.

The aide said the measure contains $22.5 billion for border security programs, including programs run by Customs and Border Protection and Immigration and Customs Enforcement. Congressional negotiators plan to release the legislation Wednesday. The measure and most of its details have so far been closely held.

But the proposal was met with fury by some on the right, including Fox News Channel's Sean Hannity, a close friend of the president, who slammed it as a "garbage compromise."

Jenny Beth Martin, co-founder of the Tea Party Patriots, released a scathing statement saying she and others had been "hoodwinked."

"This so-called 'deal' is worse than a joke," she said.

The hosts of Trump favorite "Fox & Friends," however, urged the president to agree to the deal and keep the government open, a relief to White House officials and congressional Republicans who had been nervously watching the roll call of conservative media voices, trying to predict where Trump would land.

Conservative Rep. Mark Meadows, R-N.C., a close ally of the president, said that if Trump does agrees to the deal, he could be spared a "conservative uproar because everyone expects executive action to follow." That's despite concerns from many Republicans about executive over-reach and the precedent Trump might be setting for future presidents of both parties.

"Two things are clear. We will not have a shutdown of the government and executive action to reprogram additional border security dollars is required," Meadows said.