President Donald Trump on Friday unveiled a tough new policy toward the “rogue regime in Iran,” prior to declaring that the nuclear deal reached by ... 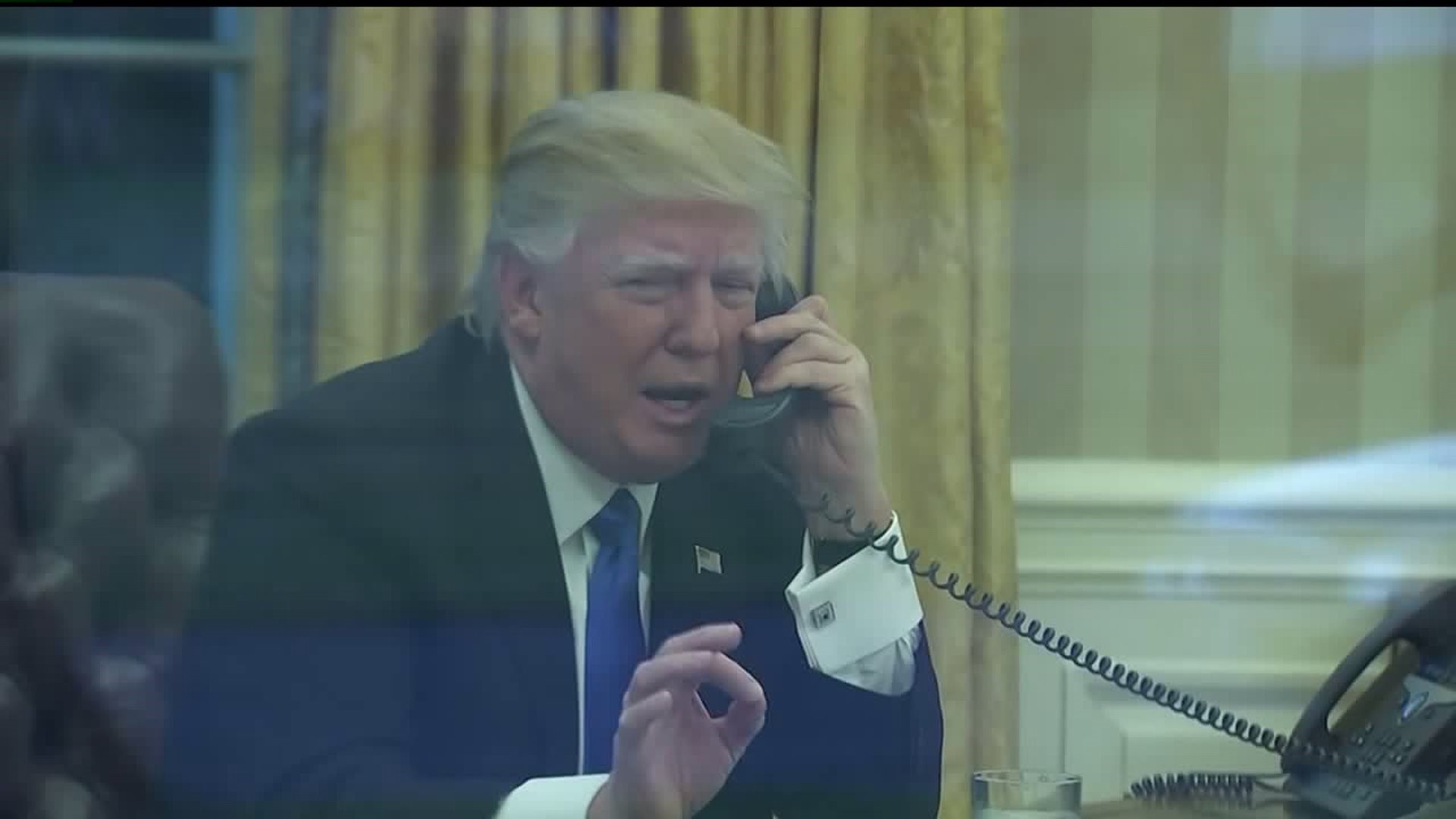 (CNN) -- President Donald Trump on Friday unveiled a tough new policy toward the "rogue regime in Iran," prior to declaring that the nuclear deal reached by the Obama administration was no longer in US interests, though he was expected to stop short of ripping it up.

"History has shown that the longer we ignore a threat, the more dangerous that threat becomes," Trump said, opening a speech on his new approach at the White House by recalling the repression of the Iranian revolution in 1979, and recalling terror attacks by Iranian proxies against the United States, including the 1983 bombing of a barracks in Beirut that killed 241 US Marines.

"The regime's two favorite chants are 'Death to America' and 'Death to Israel,'" Trump said.

"The Iranian dictatorship's aggression continues to this day," Trump said, branding the Tehran government a "fanatical regime" that sponsors terrorism and deploys missiles that threaten US troops and allies.

Trump was expected to "decertify" Iran's compliance in the nuclear pact, but that doesn't amount to ripping up the accord, as he promised to do as a candidate.

Instead, Trump will foist the agreement upon Congress, which now has 60 days to decide whether to re-impose sanctions that would likely cause Iran to walk away from the deal.

Republicans and Democrats alike -- who also face upcoming battles over taxes, immigration and health care -- have shown few signs they're willing to take up another divisive issue.

If lawmakers decide to impose new punitive economic sanctions on Iran, the deal will likely fall apart. Instead, the Trump administration wants members of Congress to adopt new measures that would keep the deal intact, while spelling out parameters by which the US would impose new sanctions should Iran violate its agreements.

In his midday speech, Trump is also expected to detail a more combative approach to Iran's ballistic missile program and its support for terrorist networks, including the possibility of new economic sanctions on individuals and entities associated with the Iranian Revolutionary Guard Corps, which provides support for a number of militant groups, including Hezbollah.

The President hopes to de-emphasize the nuclear agreement in US dealings with Iran, instead laying out a plan that "focuses on neutralizing the government of Iran's destabilizing influence and constraining its aggression, particularly its support for terrorism and militants," according to a summary of his approach distributed by the White House earlier Friday morning. Iran's destabilizing efforts in the region extend from Yemen to Syria to Saudi Arabia.

Trump has been weighing his Iran decision for weeks and has faced intense pressure from European allies to maintain the US commitment to the accord. His national security advisers have encouraged him to avoid completely withdrawing from the agreement, which was signed by the US along with Britain, France, Germany, Russia, China, the European Union and Iran in 2015.

A complete removal of the United States from the nuclear deal would isolate the United States and provide an opening for Iran to rethink its own commitments on reducing nuclear stockpiles, some of Trump's advisers and foreign counterparts warned.

Trump has resisted, insisting that he fulfill a core campaign promise to remove the United States from agreements he deems poorly negotiated and harmful. He has twice "certified" the deal, but angrily told his top advisers that he would do so no longer, fearing it appeared he was backing out of his pledge.

Trump made known in "forceful, not uncertain" terms that he was disappointed by the options his team had been presenting him and wanted a different approach, according to a person familiar with the discussions, who described Trump's reaction as an "extended outburst." The confrontation came around July 17, when he last certified Iran's compliance in the deal.

Trump was upset and -- in the face of other unfulfilled campaign promises -- angry that his team appeared to be steering him away from one of his chief pledges to voters.

According to the source, Trump complained that his national security team, including Secretary of State Rex Tillerson, Defense Secretary James Mattis and National Security Adviser H.R. McMaster, didn't feel as much urgency in completing something he had promised to do on the campaign trail.

He certified the deal over the summer, but continued to resent his top aides for pressuring him to do it, the source said. He later stated publicly in an interview that he would rather have decertified the agreement.

Since then, Trump's team devised the middle-of-the-road plan that he unveiled Friday, which allows the President to proclaim to supporters that he's rejected the deal while still remaining a party to it. All of his national security team, at this point, is behind the decision, according to senior administration officials.

"The President, on many occasions, talked about either tearing the deal up or fixing the deal, and he said many times, we got to fix this deal," Secretary of State Rex Tillerson told reporters on Thursday evening. "What we are laying out here, this is the pathway, we think, that provides us with the best platform to attempt to fix this deal."

"We may be unsuccessful, we may not be able to fix it and if we are not, then we may end up out of the deal," Tillerson went on. "But I think what the President is saying, before I do that and just walk, look, we will try. We will try. We will go try to fix it. I think you are going to hear he is not particular optimistic."

Trump told Fox News host Sean Hannity in a friendly interview this week it was "one of the most incompetently drawn deals I've ever seen."

Trump has long railed against the agreement as unfairly benefiting Iran while damaging US security interests in the region. He's questioned why the agreement ends after a decade, leaving open the possibility that Iran could resume its push to develop a nuclear weapon. And administration officials say a more stringent inspections program is required to more fully determine whether Iran has halted its nuclear program, which Tehran insists is for peaceful purposes only.

In his remarks on Friday, Trump will make clear that those issues must be addressed. Administration officials say it's unlikely the current agreement can be reopened, given resistance from European partners and Iran's government. Instead, the United States believes a new agreement must be forged that would accompany the existing deal.

But expectations are low, even within the administration, that such a strategy will be successful, given Iran's public resistance to returning to the accord after years of intensive negotiations under the Obama administration.

European allies have also ruled out reopening the agreement since international monitoring agencies are in agreement that Iran is in compliance with its agreements. Even Trump's administration has conceded that Iran is currently technically complying with the accord.

Iran's Speaker of Parliament Ali Larijani said Friday that Iran may withdraw from the nuclear agreement if the Unites States does, Russian state-run TASS reported Friday.

Speaking to reporters in St. Petersburg, Larijani acknowledged that quitting the deal was "a possibility" and said that if the US does not implement the agreements reached when the nuclear deal was signed, nothing will remain of the accord.

"If they act like it, then there will be hardly anything left from this agreement. So a new issue will arise on the international arena," Larijani said, according to Russia's state-owned outlet Sputnik.

Kremlin spokesman Dmitry Peskov said Friday that it was "obvious" that any action by the US to pull out of the Iran nuclear deal will have "very, very negative consequences."

"Such actions will definitely harm the atmosphere of predictability, security, stability and non-proliferation throughout the world, which can seriously aggravate the situation surrounding the Iranian nuclear dossier," Peskov said during a regular call with reporters.

"We already know Tehran's response, Tehran will also leave this agreement. Therefore, Russia will consistently continue the line, which was repeatedly formulated by President Putin, aimed at providing the conditions for solving this problem, conditions for resolving the Iranian nuclear dossier, and conditions which will allow us to prevent the spreading of nuclear weapons," he said.

In telephone conversations with French President Emanuel Macron and British Prime Minister Theresa May this week, Trump heard sharp resistance to any move that would weaken the Iran nuclear deal. Both leaders affirmed their countries' commitments to remaining part of the accord.

Even some of Trump's own aides have worried the President is more interested in deploying bellicose threats against Tehran than taking productive steps toward stabilizing the region. It's a fear that's shared by Republican lawmakers on Capitol Hill, who must now determine a feasible path for either salvaging the nuclear deal or taking steps to dismantle it.

The top senator on the Foreign Relations Committee, Bob Corker of Tennessee, is embroiled in a bitter feud with Trump, warning his language could start "World War III." Because of his committee post, Corker will oversee much of the proceedings on the Iran deal.

On Thursday, Tillerson cast skepticism on the prospect of lawmakers coming along with the administration's point of view.

"I don't want to suggest to you this is a slam dunk up there on the Hill. We know it is not," he said. "People have very strong feelings about this nuclear arrangement with Iran."