Pelosi prepares to send articles of impeachment to Senate

If four Republicans break ranks and vote with all 47 Democrats in the chamber to have witnesses or documents in the trial it could scuttle hopes of congressiona... 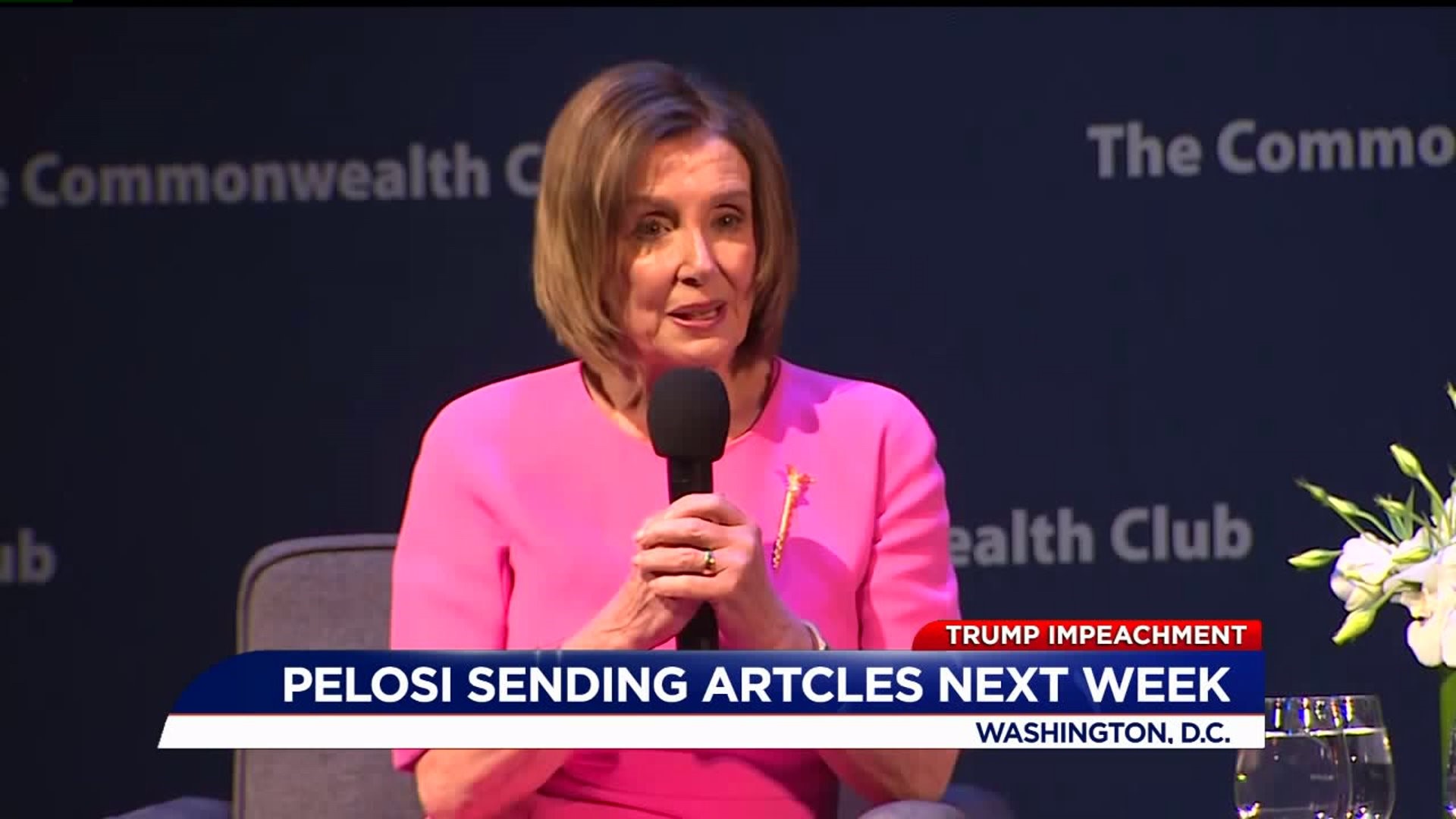 Pelosi's letter signals the end of the weeks-long standoff between the House and Senate over the impeachment articles, after Pelosi delayed sending the two articles of impeachment the House passed last month to the Senate while Democrats pressed Senate Majority Leader Mitch McConnell to agree to have witnesses in the trial.

"I have asked Judiciary Committee Chairman Jerry Nadler to be prepared to bring to the Floor next week a resolution to appoint managers and transmit articles of impeachment to the Senate," Pelosi wrote in a letter to her caucus. "I will be consulting with you at our Tuesday House Democratic Caucus meeting on how we proceed further."

Pelosi's letter means the Senate impeachment trial could begin as soon as next week. The House needs to pass a resolution naming impeachment managers before the articles are formally sent to the Senate, and the Senate will also have to take procedural steps before the trial gets underway.

Republicans believe Trump could be acquitted in the Senate by the time of his February 4 State of the Union address, giving him a major platform to tout the outcome before a nationally televised audience, according to GOP sources involved in the planning.

The schedule outlined on Friday bolsters that possibility, with Pelosi indicating the articles of impeachment would be delivered to the Senate next week.

Republicans are eager to move to acquit the President after opening arguments are completed, even as Democrats demand witnesses and documents. If four Republicans break ranks and vote with all 47 Democrats in the chamber to have witnesses or documents in the trial, however, it could scuttle hopes of congressional Republicans and the White House for a quick trial.

It's not clear whether Pelosi's gambit to withhold the articles will change the trajectory of the Senate trial. Democrats have pushed for the Senate to agree to hear from witnesses as part of the trial, accusing McConnell of a cover-up for coordinating with the White House.

"Leader McConnell's tactics are a clear indication of the fear that he and President Trump have regarding the facts of the President's violations for which he was impeached," Pelosi wrote Friday.

But McConnell refused to change course on the trial as the impasse dragged on, saying he would pass a resolution to establish the rules of the trial with only Republican votes and then make a decision on witnesses later.

This week, Pelosi pushed for McConnell to publish the rules of the trial before she would send the articles, arguing she wanted to see the "arena" that the impeachment managers will operate in during the trial.

McConnell rejected her proposal. He's argued that the Senate should agree to a rule to begin the trial and then later decide on witnesses, just as the Senate did during the 1999 impeachment trial of former President Bill Clinton. And he said this week he's got the votes — all Republicans — to go that route.

Democrats argue that McConnell is not following the Clinton precedent, because the Senate witnesses in that trial had already testified before a grand jury, while the witnesses Senate Democrats are seeking — including former national security adviser John Bolton and acting White House chief of staff Mick Mulvaney — refused to testify during the House's impeachment inquiry.

Bolton's statement earlier this week that he would testify in a Senate trial, if subpoenaed, prompted a new push from Democrats to agree to witnesses, but that has not moved McConnell or the Senate GOP conference. In order for witnesses to testify, Senate Minority Leader Chuck Schumer would have to peel off four Republican senators to vote for approving them.

Pelosi dismissed the notion that she faced pressure as a result of any impatience among rank-and-file Democrats, saying the feedback she received was "absolutely total cooperation."

Pelosi added that talk about pressure on her over withholding the articles "cracks me up."