TIMELINE: Beto O'Rourke's trail from breakout US Senate candidate to departure from 2020 race

Nearly a year after taking his race against Ted Cruz down to the wire in Texas, the popular El Paso-born Democrat has put his journey for loftier ambitions on hold. 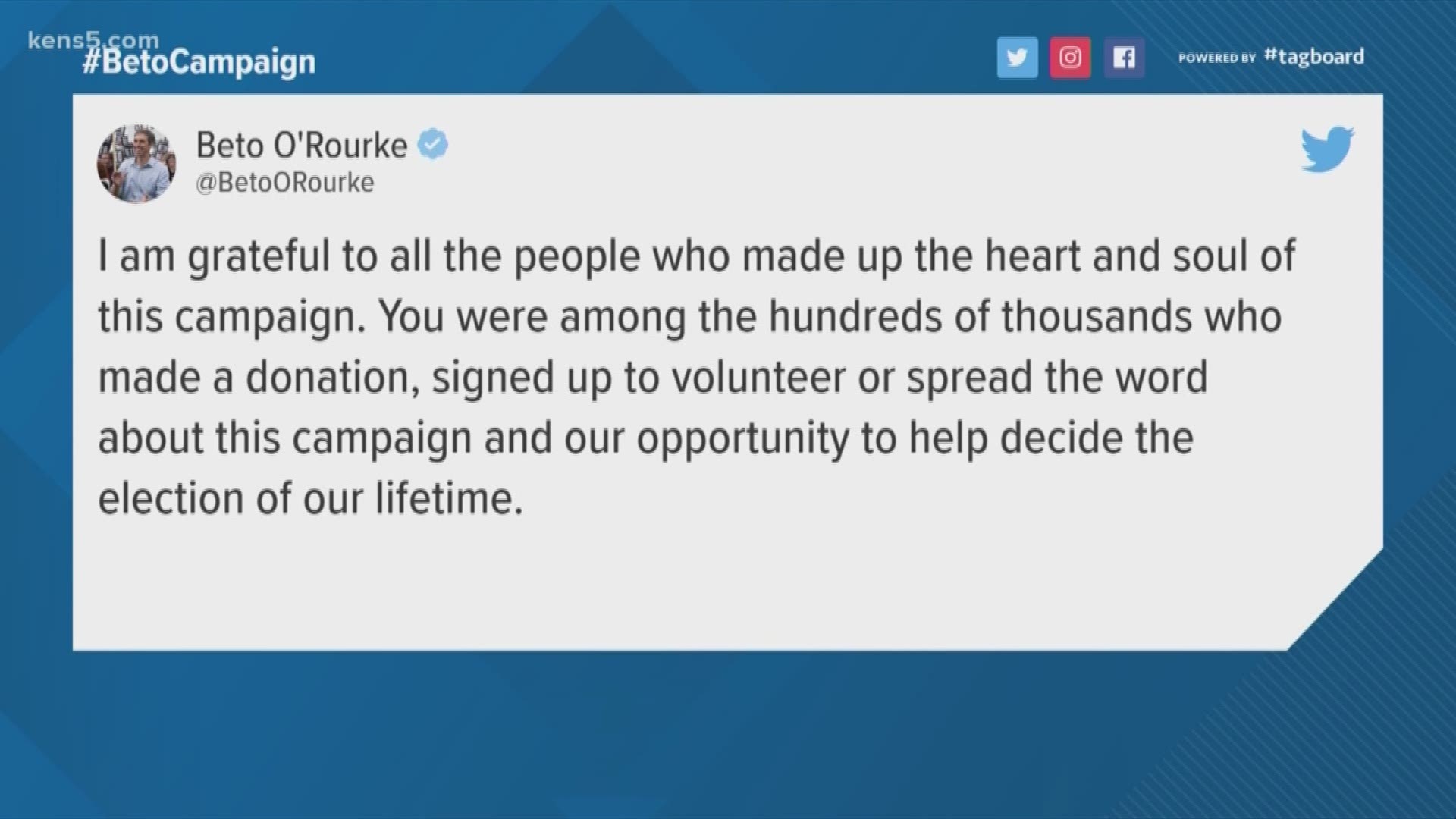 SAN ANTONIO — On Friday afternoon, Beto O'Rourke announced he would be leaving the 2020 race—nearly 12 full months after people began to wonder what was next for the breaking candidate of 2018's U.S. Senate race to represent Texas.

Here's a timeline of O'Rourke's journey from the end of that election through this week.

Nov. 6, 2018 - Capping off a U.S. Senate race that saw him become a rising star in the political world, Democrat Beto O'Rourke, then a member of Congress representing a slice of western Texas, including his hometown of El Paso, lost to Republican incumbent Ted Cruz in a tight Election Night outcome.

During the race, O'Rourke set a record for the largest fundraising quarter ever in a U.S. Senate race, leading many pundits to believe the political landscape in Texas might be changing.

March 14, 2019 - Ending months of speculation on what the next phase of his political career would entail, O'Rourke announced on March 14 that he would be seeking the Democratic nomination for president. He joined an already crowded field, becoming the 15th Democrat, at the time, to announce his candidacy—including San Antonio native and former U.S. Secretary of Housing and Urban Development Julian Castro.

March 15, 2019 - After a Reuters story revealed O'Rourke as a member of a hacking group in the 1980s, saying he had also written an online short fiction essay from the point of view of a killer who runs over two children with a car when he was 15, the newly-minted candidate expressed remorse of past actions while in Iowa.

"I have to take ownership of my words and understand the way that they make people feel when they read them now," O'Rourke said at the time. "Whatever my intention was as a a teenager, it doesn’t matter. So I think — I’ll just speak for myself — I have to look long and hard at my actions, the words I use, and I have to constantly try to do better."

March 25, 2019 - O'Rourke announced that veteran strategist Jennifer O'Malley Dillon, who previously worked to return former President Barack Obama to the White House in 2012 as well as acting as executive director of the Democratic National Committee, would be his campaign manager.

March 30, 2019 - The campaign held its first events in Texas—a series of rallies in El Paso, Houston and Austin in which he offered a taste of his platform that included a $15 minimum wage, universal background checks for gun purchases, ending the prohibition of marijuana and investing in public education.

"Let’s agree that before we are anything else," O'Rourke said in Houston. "We are Americans first.”

The campaign also reported that it raised $6.1 million in online contributions in its first 24 hours.

May 30, 2019 - In a roundtable discussion on immigration policy held in Dallas, O'Rourke proposed a reversal of Trump-era practices, saying that, if elected, he would end the threat of banning people coming to the U.S. from Muslim-majority countries, put a stop of family separations at the U.S.-Mexico border and create a pathway to citizenship for an estimate 11 million people.

June 5, 2019 - An early-summer Quinnipiac University poll revealed that Texas has the potential to be a battleground state in 2020, and also that O'Rourke, along with other high-profile Democratic candidates, would be competitive with the Republican commander-in-chief in the Lone Star State.

June 17, 2019 - A new poll revealed that O'Rourke had the second-highest amount of support for Democratic candidates among Texas voters, trailing only former Vice President Joe Biden.

June 26, 2019 - A heated exchange between Texan candidate O'Rourke and Julian Castro over the border crisis became one of the main talking points of the first Democratic debate, held in Miami. The El Paso native said the U.S. should spare no expense in reuniting separate families at the border, while the San Antonian candidate focused on decriminalizing border crossings.

June 29, 2019 - The O'Rourke campaign held a rally in Houston near a controversial facility that was housing unaccompanied migrant children at the time, saying, “We are incarcerating more children than anytime in America’s history since we interned Japanese-Americans during World War II."

July 3, 2019 - In latest poll, O'Rourke trailed the Democratic frontrunners, having garnered only 2% of voter support.

August 3, 2019 - O'Rourke cuts a campaign stop in Nevada short and returns to his hometown El Paso after a mass shooting results in the deaths of over 20 people. After expressing gratitude for all the help and support coming into the community, the candidate switched his tone to one of frustration, pointing his words at Trump.

"You see a president who in his first speech as candidate for highest office in the land, described Mexican immigrants as rapists and criminals,” O'Rourke said at the time. “His rhetoric has produced the kind of hate-crimes we saw in El Paso."

Sept. 11, 2019 - O'Rourke's campaign begins to lose some steam, the latest poll showing that Elizabeth Warren had overtaken him for Democratic support among Texas voters.

Sept. 12, 2019 - In the third Democratic debate – this one held in Houston – O'Rourke takes an emotional stand against the sale of assault weapons, saying at one point that there weren't enough ambulances at times to take victims to the hospital during the El Paso shooting weeks prior.

Another shooting two weeks prior in Odessa, Texas, resulted in seven people losing their lives, and 22 others injured.

Sept. 19, 2019 - In his latest policy proposal, O'Rourke says that, if elected, he would push for a federal tax on the marijuana industry and steer the revenue towards a grant program for those formerly incarcerated for nonviolent marijuana offenses.

Sept. 28, 2019 - As Congress begins its impeachment investigation of President Trump, O'Rourke says "the best thing" the commander-in-chief can do is resign.

Oct. 10, 2019 - During a CNN town hall on LGBTQ rights, O'Rourke doesn't hesitate to answer a question from Don Lemon on whether religious institutions should lose their tax-exempt status if they oppose same-sex marriage.

"Yes," O’Rourke replied. "There can be no reward, no benefit, no tax break, for anyone or any institution, any organization in America, that denies the full human rights and the full civil rights of every single one of us."

The stance was another display of the candidate treading into divisive territory where few allies in the primary field could be found.

Oct. 17, 2019 - O'Rourke nearly sells out a Dallas-area rally his campaign had organized in response to a simultaneous Donald Trump re-election event.

6,000 supporters turned up to hear the Democrat, who touched on topics that ranged from women's healthcare and immigration to mass shootings.

"The generations that follow us are counting on us now at this moment," he said.

Nov. 1, 2019 - O'Rourke's campaign is suspended as he announces he is dropping his 2020 bid. On social media, he appeared to throw his support behind whoever the Democratic nominee would end up being, saying "we will be well served by any one of them, and I'm going to be proud to support whoever she or he is."