Michael Cohen apologizes to Senate panel for lying to Congress 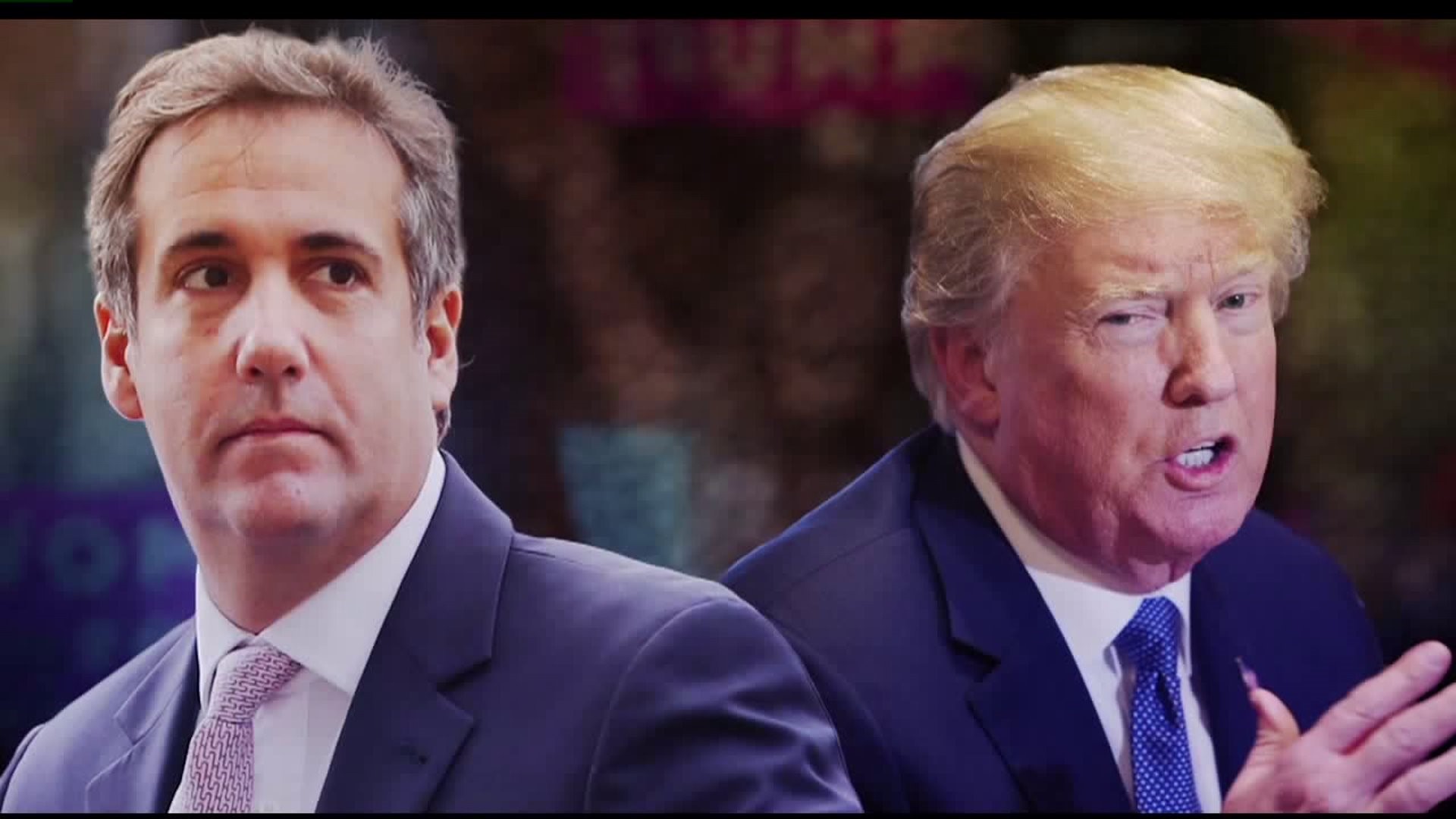 *** Live coverage of the public hearing is scheduled for Wednesday, Feb. 27. ***

(CNN) -- President Donald Trump's former fixer and personal attorney Michael Cohen expressed contrition Tuesday, February 26 upon his return to Capitol Hill, apologizing to the Senate Intelligence Committee for the lies he told during his 2017 testimony, according to multiple sources familiar with his interview.

Cohen testified behind closed doors before the committee on Tuesday, the first of his three consecutive congressional appearances this week, with one public and two private sessions.

In his public testimony Wednesday, Cohen is expected to discuss publicly for the first time Trump's role in some of the crimes his former lawyer pleaded guilty to last year, a source familiar with Cohen's preparations for his testimony told CNN.

Cohen is expected to give behind-the-scenes details raising questions of Trump's conduct in business and when he was a presidential candidate, according to the source. Cohen may also provide documents to back up his claims, the source said, though the congressional committees have not confirmed they have received anything new from Cohen.

As senators filtered in and out of Tuesday's daylong interview with Cohen, they said he was being subjected to an "extensive grilling" by committee staff, including about the lies he had told the committee when he first testified in 2017 about how far the Trump Tower Moscow project deliberations extended into the 2016 campaign.

"There is a reason that is a closed hearing, but he did spend quite a bit of time explaining what he had told us before that wasn't truthful," said Sen. Roy Blunt, a Missouri Republican.

Sen. Susan Collins, a Maine Republican, said that Cohen was "a very different guy" than the last time he appeared.

Like most witness interviews in the Senate Intelligence Committee's Russia investigation, Cohen is being quizzed by staffers on the panel, according to a source with knowledge of the closed-door hearing. While members are in attendance, they are passing along questions via notes to staffers who are leading the questioning, the source said.

Asked if Cohen revealed any new information on potential collusion, Collins said: "I'm really not permitted to talk about what happened this morning. I will say he has been asked many, many questions. I've submitted some that have been asked and a couple that still haven't been. And it's an extensive grilling. But I really can't go into the specifics."

The three hearings this week will give Cohen the opportunity to tell his side of the story involving his interactions with his former boss before Cohen reports to prison on May 6 for a three-year sentence after pleading guilty to tax crimes, campaign finance violations and lying to Congress in his previous testimony.

What will Trump do?

Cohen is also facing sharp questions from Republican critics who are likely to try to poke holes in his narrative and attack his credibility as a Trump critic, given that he has already been convicted of lying to Congress when he testified in 2017, a point White House press secretary Sarah Sanders made moments before Cohen went behind closed doors Tuesday.

"Disgraced felon Michael Cohen is going to prison for lying to Congress and making other false statements," Sanders said in a public statement. "Sadly, he will go before Congress this week and we can expect more of the same. It's laughable that anyone would take a convicted liar like Cohen at his word, and pathetic to see him given yet another opportunity to spread his lies."

The main event for Cohen this week is his public testimony Wednesday before the House Oversight Committee, where he has agreed to discuss "the President's debts and payments relating to efforts to influence the 2016 election," a reference to the hush money payments Cohen made to two women in the home stretch of the 2016 campaign.

Cohen will also speak about the President's finances, conflicts of interests at the Trump Foundation and the Trump International Hotel, according to a memo released last week by House Oversight Chairman Elijah Cummings, a Maryland Democrat.

Wednesday's hearing sets the stage for a classic Washington split-screen: Cohen will be testifying publicly the same day that Trump is in Vietnam for his meeting with North Korean leader Kim Jong Un, albeit the two events will be occurring on opposite sides of the world with a 12-hour time difference between Washington and Hanoi.

White House officials in Washington will be watching Cohen's testimony and taking notes, in case the President wants to be briefed on what was said, according to a senior White House official. The official told CNN the expectation is, however, that Trump will stay up overnight in Hanoi and watch Wednesday's hearing.

Cohen's Oversight testimony is not intended to cover topics related to the Russia investigation, according to Cummings' memo. But he will be grilled about those topics -- such as the Trump Tower Moscow project and the June 2016 Trump Tower meeting -- when he is behind closed doors Tuesday before the Senate Intelligence Committee and Thursday before the House Intelligence Committee.

From Trump loyalist to 'rat'

Cohen's return to Capitol Hill comes roughly 18 months after he made his first appearance before the intelligence panels as part of their Russia investigation, where he lied about how long discussions about a Trump Tower Moscow project extended into the 2016 campaign.

At that time, Cohen was a loyal Trump defender. But after pleading guilty, Cohen began cooperating with special counsel Robert Mueller's investigation, which has prompted repeated attacks from the President, who has labeled Cohen a "rat."

Cohen previewed the tenor of his testimony at his December sentencing hearing, when he said of Trump that he felt it was "my duty to cover up his dirty deeds."

"I take full responsibility for each act that I pled guilty to: The personal ones to me and those involving the President of the United States of America," he said.

At Wednesday's public hearing, Democrats are likely to tease out details from Cohen on a number of key topics involving Trump, particularly the allegation from prosecutors that Trump directed Cohen to make the hush money payments to two women who were alleging affairs. Trump has denied the affairs and directing Cohen to make the payments.

Cummings told reporters Monday he did not know what Cohen would tell the committee, but suggested it could be an historically significant event.

"This is one moment in history. And when you get to my age, and you look back and you realize, these moments are very, very, very significant. It may very well be a turning point in our country's history, I don't know," Cummings said.

"He's the only person that I know of who has accused this President of a crime," Cummings said of Cohen. "And so I think it's only fair to the President and to Michael Cohen and to the public that he come forward so that they'll have an opportunity to observe his demeanor, Republicans will be able to ask him questions, just like in a cross examination, and then they can make their own judgments."

In his letter last week, Cummings wrote that he consulted with both the Justice Department and House Intelligence Chairman Adam Schiff, a California Democrat, in determining the scope of the committee's hearing, at which Cohen is appearing voluntarily.

But Republicans on the Oversight panel, including some of Trump's staunchest congressional defenders, aren't going to sit idly by as Cohen criticizes the President.

Ohio Rep. Jim Jordan, the top Republican on the panel, has slammed Cummings for holding the hearing in the first place, and he's signaled that GOP committee members have no plans to adhere to the scope of the hearing that Cummings has outlined.

"Chairman Cummings's first major hearing will feature Michael Cohen as phase one of the Democrats' coordinated campaign to remove the President from office," Jordan said. "Our members intend to question Mr. Cohen about the crimes he pleaded guilty to, other criminal activity he participated in but refused to disclose, his international financial dealings and a long list of other probative activities."

Cohen's closed-door appearances before the Senate and House Intelligence committees aren't likely to offer as much fireworks as his Oversight hearing, but they will offer Congress more leeway to dive into Russia-related matters in the confidential hearings.

Schiff told ABC News' "This Week" on Sunday that Cohen could testify about "a great deal, starting with why the false statements before our committee when he first appeared."

"Did they go beyond what he told us about Moscow Trump Tower into other areas as well?" Schiff said. "Who would have been aware of the false testimony that he was giving? What other light can he shed now that he's cooperating on issues of obstruction of justice or collusion? What more could he tell us about the Trump Tower New York meeting or any other issues relevant to our investigation. We think he has a lot to offer."

Tuesday's Senate interview, where Cohen will be testifying under a subpoena, is a departure from most of the panel's Russia investigation interviews -- because senators will be in the room doing the questioning, according to a source familiar with the matter. To date, the bulk of the 200-plus interviews the committee has conducted in its two-year Russia probe have been led by committee staff.

Senators on the committee responded in unison Monday when asked what they wanted to hear from Cohen: "The truth," five panel members told CNN, including Chairman Richard Burr of North Carolina and the panel's top Democrat, Mark Warner of Virginia.

"Hypothetically, I would hope that we would hear the truth from him, and that he would be asked the same questions he was asked the last time to see what the answers are this time," said Sen. Susan Collins, a Maine Republican.

Warner said that he hoped Cohen was the first of several key witnesses that will be called back before the committee for a second interview.

"Obviously this is just one of the key figures in the investigation, and it's critically important that we get them all back, but tomorrow is a good first step," Warner said.

Cohen's appearance before all three committees has been an episode in itself, as he postponed all three appearances earlier this month -- for three different reasons.

Cohen scrapped his initial date to testify publicly citing threats that Trump and the President's personal attorney Rudy Giuliani made against his family. (Trump responded that Cohen was only threatened by the truth.) Then Cohen postponed his House Intelligence Committee appearance, which Schiff attributed vaguely to "the interests of the investigation."

And finally, Cohen cited "post-surgery medical needs" when the Senate Intelligence panel pushed back his appearance earlier this month.

Burr made Cohen provide a doctor's note. But Burr wasn't amused when Cohen later showed up in a social media post that weekend enjoying a lengthy dinner at a Manhattan restaurant.

"I can assure you that any goodwill that might have existed in the committee with Michael Cohen is now gone," Burr said.