The House Judiciary Committee is set to take over the impeachment probe of President Donald Trump, scheduling a hearing for next week as they push closer to a p... 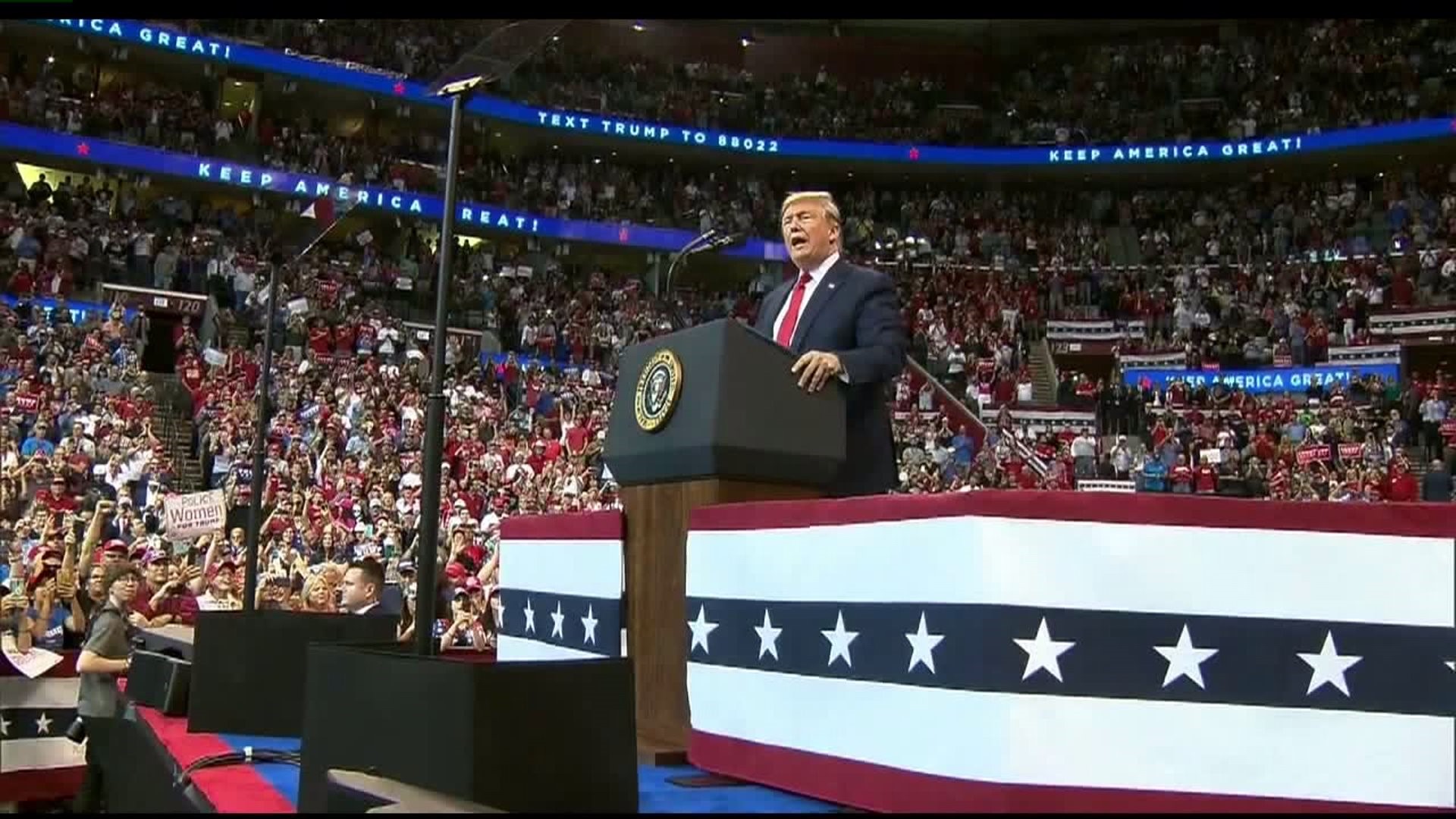 WASHINGTON (AP) — The House Judiciary Committee is set to take over the impeachment probe of President Donald Trump, scheduling a hearing for next week as they push closer to a possible vote on actual charges of “high crimes and misdemeanors.”

The Judiciary panel scheduled the hearing as the separate Intelligence Committee on Tuesday released two last transcripts from its depositions, including from a White House budget official who detailed concerns among colleagues as Trump ordered them, through intermediaries, to put a hold on military aid to Ukraine.

Trump ordered the hold as he was pressuring Ukraine’s president to investigate Democrats, the issue at the heart of the impeachment probe. Multiple government witnesses testified in impeachment hearings held by the Intelligence panel this month that Trump directed his personal lawyer Rudy Giuliani to take the lead on Ukraine policy and that Giuliani pushed an “irregular” diplomatic channel.

The Intelligence Committee is wrapping up the investigative phase of the probe and preparing its report for the next. Committee Chairman Adam Schiff has said the report could be released soon after the House returns from its Thanksgiving break.

The initial Judiciary hearing on Dec. 4, the day after lawmakers return, will feature legal experts who will examine questions of constitutional grounds as the panel decides whether to write articles of impeachment against Trump — and if so what those articles will be. Judiciary Chairman Jerrold Nadler, D-N.Y., said Tuesday that his panel’s hearing will “explore the framework put in place to respond to serious allegations of impeachable misconduct.”

Democrats are aiming for a final House vote by Christmas, which would set the stage for a likely Senate trial in January.

Trump, meanwhile, tried to put distance between himself and Giuliani in a radio interview Tuesday. Asked by host Bill O’Reilly what Giuliani was doing on his behalf in Ukraine, Trump said, “I don’t even know,” adding that Giuliani had canceled one trip and had other clients as well.

Asked directly if he had directed Giuliani to go to Ukraine on his behalf, Trump said, “No.”

In a phone call to Ukrainian President Volodymyr Zelenskiy on July 25, Trump had said several times he would have Giuliani contact Zelenskiy. “Rudy very much knows what’s happening and he is a very capable guy,” Trump said to Zelenskiy, according to a rough transcript released by the White House.

Trump and his lawyers are invited to attend the Judiciary hearing and make a request to question witnesses, according to Democratic rules approved by the House last month. The committee released a letter from Nadler to the Republican president, saying that he hopes Trump will participate, “consistent with the rules of decorum and with the solemn nature of the work before us.”

It’s unlikely that the president himself would attend, as Trump is scheduled to be overseas on Dec. 4 for a summit with NATO allies outside London — a split screen showing leadership that Trump’s allies might find favorable. The Judiciary panel gave the White House until Sunday evening to decide whether Trump or his lawyers would attend.

The committee will introduce articles of impeachment, debate them and then hold a vote. If charges are approved by the end of the second week of December, the House could hold a formal impeachment vote the third week.

If Democrats stay on schedule, the committee will introduce articles of impeachment, debate them and then hold a vote, a process that could take several days. If charges are approved by the end of the second week of December, the House could hold a formal impeachment vote the third week of the month just before leaving for the holidays.

The charges are expected to mostly focus on Ukraine. Democrats are considering an overall “abuse of power” article against Trump, which could be broken into categories such as bribery or extortion. That article would center on the Democrats’ assertion, based on witness testimony, that Trump used his office to pressure Ukraine into politically motivated investigations.

Democrats also are expected to include an article on obstruction of Congress that outlines Trump’s instructions to officials in his administration to defy subpoenas for documents or testimony.

Lastly, Democrats could potentially include an obstruction of justice article based on special counsel Robert Mueller’s report released earlier this year. Mueller said he could not exonerate Trump on that point, essentially leaving the matter up to Congress.

When and if the House approves articles of impeachment, the Republican-controlled Senate would be expected to hold a trial in early 2020. Unless political dynamics change drastically, Trump would have the backing of majority Republicans in that chamber and be acquitted.

While the matter remains in the House, Schiff said in a letter to his colleagues on Monday that his committee “will continue with our investigative work” and could still hold depositions or hearings. But Schiff said it would not prolong a fight to obtain documents or testimony in court.

“The president has accepted or enlisted foreign nations to interfere in our upcoming elections, including the next one,” Schiff said in the letter. “This is an urgent matter that cannot wait if we are to protect the nation’s security and the integrity of our elections.”

In a transcript of closed-door testimony released Tuesday, Office of Management and Budget official Mark Sandy, a career employee, told lawmakers that his office was notified as early as July 12 by the White House chief of staff’s office that Trump was withholding the military aid. That was two weeks before Trump asked Ukrainian President Zelenskiy to investigate Democrats.

Sandy testified that Trump himself requested additional information about the aid on July 19 after seeing an unidentified “media report.” The office then started the official process of withholding the money on July 25, the day of the call between Trump and Zelenskiy, Sandy said.

He testified that he raised concerns about the legality of the holdup, but wasn’t given a reason until September, when he was told that Trump was concerned “about other countries not contributing more to Ukraine.”

Sandy said that in late July, political appointee Michael Duffey took from him his role of approving spending, a decision Duffey told him involved Mulvaney. Sandy, who has worked at OMB for more than a decade, said he was unaware of a political appointee ever previously being given that responsibility.

He also testified that he knew of two people who left the agency who had voiced concerns over the handling of the Ukraine aid.

The intelligence panel also released a transcript of the deposition of State Department official Philip Reeker, who detailed concerns about the removal of U.S. Ambassador to Ukraine Marie Yovanovitch.