The candidate for the Democratic nomination for president discussed his immigration proposals at a roundtable discussion Thursday in Dallas. 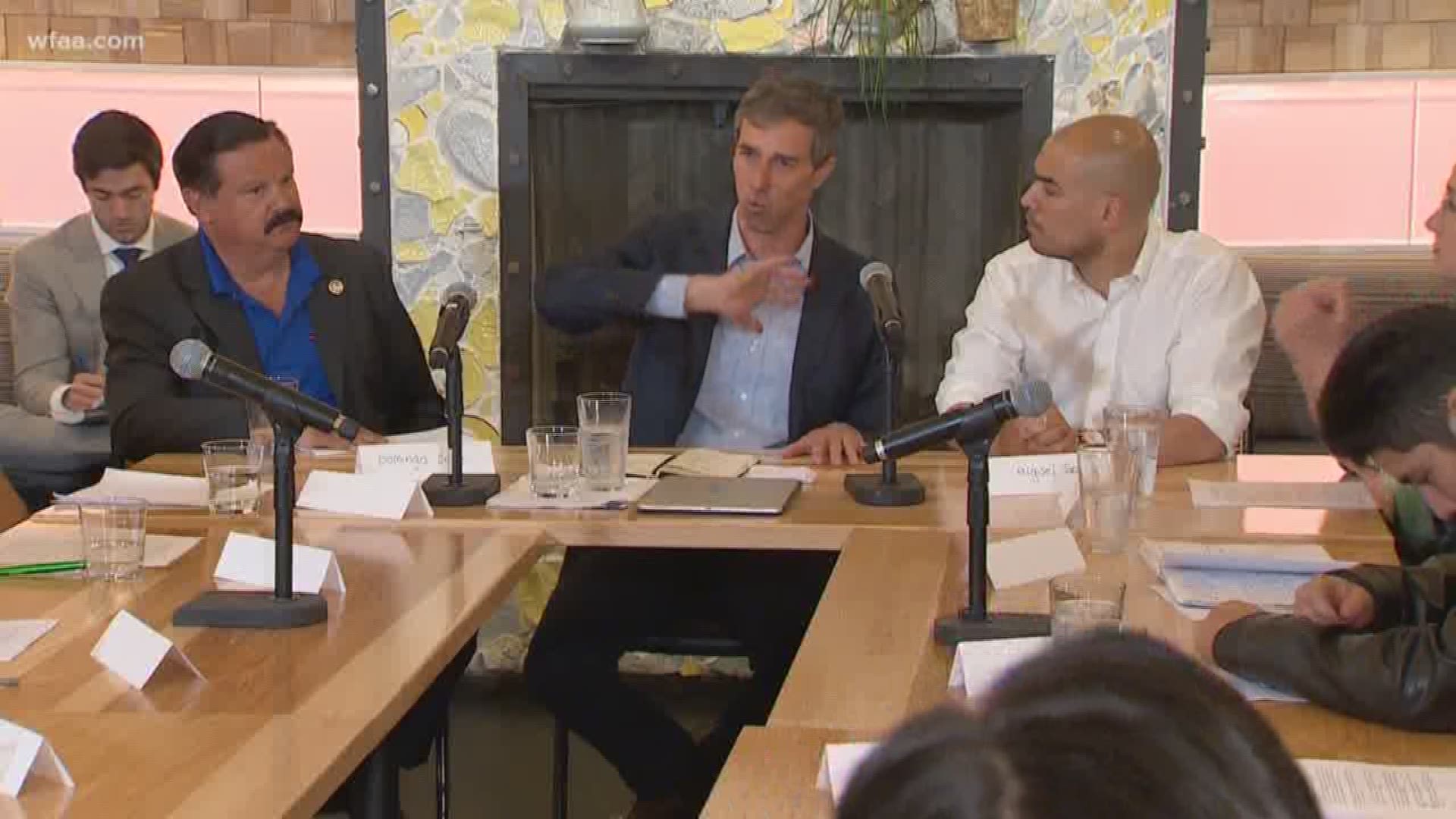 DALLAS — While also fueling his run for the White House, Beto O'Rourke used the low-key setting of an Uptown Dallas restaurant and a banquet room table full of immigration overhaul proponents to introduce the plan he hopes changes the Trump-era immigration approach.

O'Rourke, who announced the plan on Wednesday, held the Thursday roundtable discussion with immigrants, immigration attorneys and others impacted by the U.S. immigration system.

RELATED: Video shows 1,036 migrants crossing into US from Mexico

RELATED: Trump hitting Mexico with 5% tariff in response to migrants

He proposed that he'll, on day one if elected, remove the fear of deportation. He also said he'll end any threat of a ban for people from Muslim majority countries, and the Trump administration policy of family separations, requiring detention only for those crossing the border who have previous criminal backgrounds.

He also proposed creating a pathway to citizenship for an estimated 11 million people, making naturalization easier for nine million eligible immigrants, and establishing a community-based visa program where communities and congregations can serve as sponsors.

"It will help this country not to be afraid of itself, its history, and most importantly its future," O'Rourke said. "We end Trump's chaos on our border. Those who have tried to create or instill fear about immigrants are in fact making us less safe. We need to go in a far more positive direction."

Texas Attorney General Ken Paxton was among those to offer the first rebuttal. In an interview with Fox News, Paxton said he believes O'Rourke's proposals would make the immigration problem worse, not better.

"Well, I think it's going to create a greater incentive for illegal immigration," he said. "It doesn't solve our problem. If you can imagine what that would do to our border crisis, it would make it much much worse which we can't afford."

Chris Quintero, a DACA "dreamer" and participant in the round-table discussion, disagrees.

His family fled Colombia because of the threat of violence. He supports O'Rourke's plan that also proposes an additional $5 billion investment to fight poverty and the root causes of violence in the Northern Triangle that includes Guatemala, El Salvador, and Honduras.

"Work with local communities to reduce violence so that fewer families have to make the 2,000-mile journey to our country," O'Rourke said.

"If he can start convincing Americans that immigrants actually contribute to our economy and contribute to our benefit as a nation, then he can really, really do some serious good," Quintero said. "Some people say we want open borders. We don't want open borders. We want a safe border. We want a safe process. But we want a process and a humane process."

"Coming from a city of immigrants, I've seen the incredible contributions of immigrants to our communities and local economies, and have been able to experience what happens when we allow everyone to contribute to their full potential," O'Rourke said in announcing his immigration overhaul. "Under our administration, we will ensure that we advance a new vision of immigration that fully reflects our country's values and empowers every individual to contribute to the shared greatness of our country."