Leading the pack for the first time, Bernie Sanders spoke in Davenport Sunday saying his goal is much bigger than just beating President Donald Trump in November. 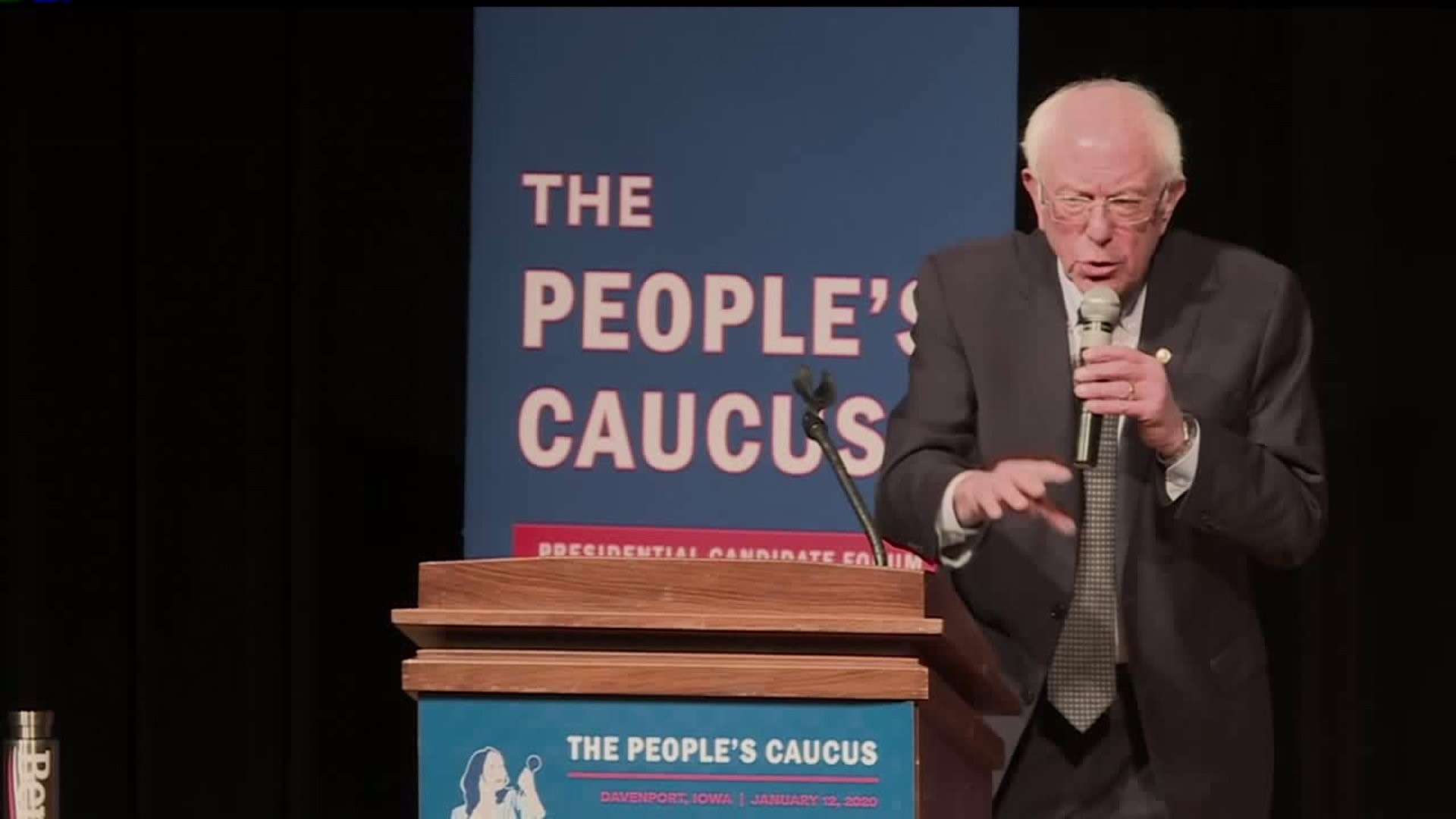 They are followed by Minnesota Sen. Amy Klobuchar (6%) and businessman Andrew Yang (5%), while the rest of the field falls at 3% or less. Around one in eight likely caucusgoers still have no first choice, even with caucus day less than a month away. Results for the full sample of likely caucusgoers have a margin of sampling error of plus or minus 3.7 percentage points.

The poll was released just hours before the deadline to qualify for the seventh Democratic presidential debate hosted by CNN and The Des Moines Register.

Leading the pack for the first time, Sanders spoke in Davenport, Iowa Sunday, Jan. 12, 2020 saying his goal is much bigger than just beating President Donald Trump in November.

"It's about creating a movement of millions of people who are prepared to stand up to an incredible powerful corporate elite and tell them enough is enough," Sanders said in Davenport. "That our country belongs to all of us, not just the one percent."

Sanders' support has increased 5 points amid a boost from core supporters since a November CNN/Des Moines Register poll. Among liberals, support for Sanders is up 8 points, and he's climbed 9 points among those under age 35. He is the only candidate to post a meaningful increase in support overall since November, and his favorability rating has also risen 5 points.

Buttigieg, the leader in the November survey, appears headed in the opposite direction, losing 9 points in support as his unfavorable numbers rose 8 points. Even with those shifts, Buttigieg remains well-positioned in the poll. Sixty percent say they are supporting or considering his candidacy, and he remains among the best liked candidates in the field -- 68% have a favorable view, second only to Warren's 70% favorability rating.

For Biden and Warren, support is roughly even vs. November (Biden holds at 15%, Warren stands at 17% support vs. 16%). For Warren, though, the share who say she is their second choice or who are considering her has declined. Overall, 59% say they are either supporting or considering Warren, down from a high of 71% in September and 66% in November.

Although Yang remains in mid-single digits, he is the only candidate in the field to show a meaningful increase in the share of likely caucusgoers who are either supporting or considering him (40% now, up from 33%). At the same time, his favorability rating increased nearly 20 points to 61%. For most other candidates in the field, those figures have stabilized or dropped.

Those dips in the share considering many of the candidates come as more likely caucus attendees say they have made up their minds about whom to support on February 3. Four in 10 now say they are locked in to their choice, up 10 points since November.

Still, that is lower than the share of likely Democratic caucusgoers who said they were committed to their choice at roughly this stage in previous cycles. At this point in 2016, 59% had made up their minds, 45% had in November 2007 and 47% in January 2004.

Most likely caucusgoers would rather see a winner of the Iowa caucuses who has a strong chance to beat President Donald Trump (55%) over one who shares their positions on major issues (40%), but the difference between those two has narrowed to its lowest point since December 2018. Overall, nearly seven in 10 are optimistic that the primaries and caucuses will result in a nominee who can defeat Trump.

Among those who have a first choice in mind, 58% believe they are backing a candidate who is not only their favorite but also has the best chance to beat Trump. About a quarter say they support the candidate they like best even though someone else has a better shot at winning, and just 9% say their first choice is one who has the best shot to win, but isn't their favorite.

Biden's backers are most apt of those behind Sanders, Warren or Buttigieg to choose electability over affection, with 14% saying they back him even though he's not their favorite. Sizable minorities of those behind Warren (31%), Buttigieg (28%) and Sanders (20%), however, say their candidate is the one they like best, even though someone else has a better chance to win.

Since the poll was completed, author Marianne Williamson dropped out of the race. That leaves 12 candidates for caucus-goers to vote for on Monday, Feb. 3.

Two issues are front and center for likely caucusgoers as they make final decisions about whom to support: 68% each call health care and climate change extremely important. On health care, 24% say Sanders' policy positions most closely align with their own, 8 points ahead of the next candidate on that list.

The poll also asked likely caucusgoers to rate the importance of several other factors that could affect their choice as caucuses approach, and found one attribute that outweighs both electability and issue positions: An ability to bring Americans together.

All told, 69% say a candidate's ability to unite the country is extremely important to their decision, roughly 10 points higher than the share who say the same about a candidate's chance of winning or shared issue views when those traits are considered individually.

About half say a candidate's ability to inspire new voters to participate (53%) or win over Republicans and independents (50%) are critical factors in their decision, while far fewer are looking to performance in polls outside Iowa for guidance (20%).

More than a third call a candidate's reaction to Donald Trump (37%) or their performance at debates (36%) extremely important factors, and 33% say the same about their interactions with caucusgoers. That dips to 28% who call the way a candidate handles media appearances a critical consideration.

Considering the strengths and weaknesses of their first-choice candidate, likely caucus attendees generally see more strength than weakness in their candidate's ability to empathize, political resume, physical health and ability to lead the military. Among backers of the top four, there are doubts on at least one measure for each of them.

The CNN/Des Moines Register/Mediacom poll was conducted by Selzer & Co. of Des Moines, Iowa, January 2 through 8 among a random sample of 701 likely Democratic caucusgoers reached on landlines or cell phones by a live interviewer.

Since the poll was completed, author Marianne Williamson dropped out of the race. That leaves 12 candidates for caucus-goers to vote for on Monday, Feb. 3.