Here's everything we learned from the Inauguration Day security briefing

What if I live in one of the restricted zones? How will DC Police keep the rest of the city safe? When will the wall come down? Here's the answers we have so far. 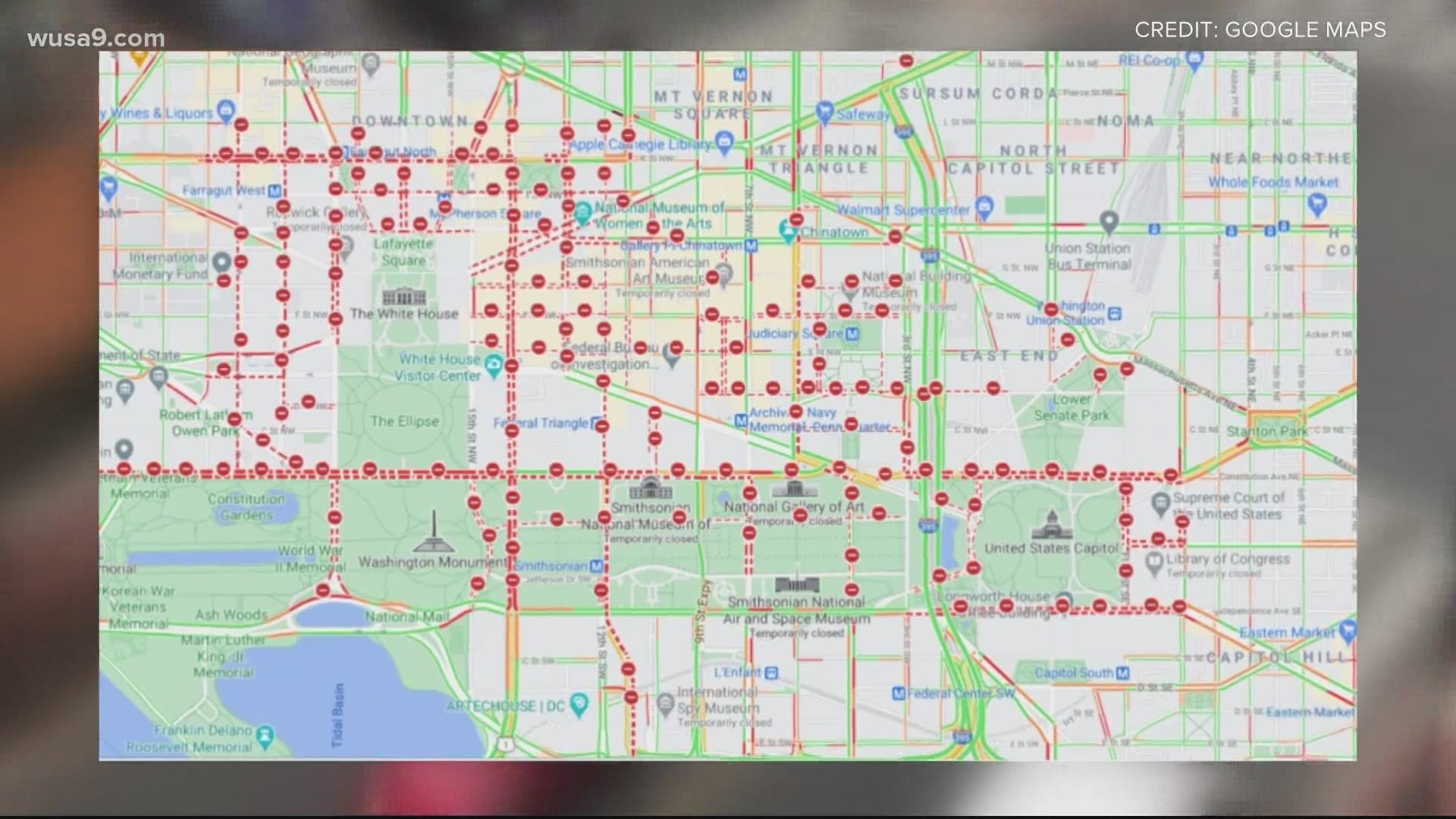 WASHINGTON — D.C. residents and visitors to the Capitol next week will see unprecedented levels of security for the inauguration of President-elect Joe Biden and Vice President-elect Kamala Harris.

D.C. Mayor Muriel Bowser was joined by representatives from the United States Secret Service, Metropolitan Police Department, National Parks Service, FEMA and WMATA on Friday for a joint briefing on the myriad changes going into place ahead of the inauguration.

Those changes include multiple road and bridge closures, the creation of a restricted zone in downtown D.C., and major changes to Metro service.

Read on to see more of what we learned from Friday’s briefing:

What areas of the city are closed, and what do I do if I live there?

The Red and Green Zones laid out by the U.S. Secret Service don’t just include the Capitol and National Mall. The perimeter has been expanded out to include some nearby residential and commercial areas. This means parking garages in those areas will be closed until after the inauguration, and residents in those areas may be asked to show their identification to National Guard officers assisting DC Police with traffic control duties before they are allowed into their neighborhoods.

Additionally, Matthew Miller, the special agent in charge of the U.S. Secret Service’s Washington Field Office, said vehicles entering both the green and red zones will be swept for weapons and explosives before being allowed to proceed.

The list of PROHIBITED items for the 2021 Presidential Inauguration can be found here: https://t.co/n8qKuQqgFB

Miller said residents and businesses in those districts who need to move about during inauguration week should contact their building owners or managers, all of whom should have been contacted by a Secret Service agent with the necessary information.

“There isn’t a man or woman in the Secret Service who isn’t keenly aware of the impact our security measures will have,” Miller said.

The city has not required hotels in the Central Business District to close next week, and Miller said accommodations may be able to be made – the Secret Service is allowing those involved in the prosecution of the Capitol riots cases to travel into the restricted area, for example.

Will the National Mall be closed? What about First Amendment activities?

The National Parks Service announced Friday that, following requests from the Secret Service, the National Mall would be closed through at least Inauguration Day. The closure began at 11 a.m. Friday.

National Mall Superintendent Jeff Reinbold said the National Parks Service had worked with groups already permitted to use the area next week to find other venues for their activities. But, Reinbold said, there will be spaces for First Amendment activities on Inauguration Day, despite the Mall being closed.

“We are the premier First Amendment area in the country, in the world probably, and we wanted to see if we could do that,” Reinbold said.

Those areas will be located on Pennsylvania Avenue at the Navy Memorial and John Marshall Park. Reinbold said those wanting to exercise their First Amendment rights will have to pass through a magnetometer and will be escorted in and out of the area by U.S. Park Police.

How will Metro be affected?

Earlier this week, WMATA General Manager Paul Wiedefeld announced that 13 Metro stations would be closed ahead of Inauguration Day.

The stations to be closed are:

Buses will continue to operate on a normal schedule until Inauguration Day, during which they will operate on a Saturday schedule.

“I know this is inconvenient for our customers, and a lot of businesses in this region, but it’s necessary for our security,” Wiedefeld said.

You’ll also likely notice more security on the Metro. Wiedefeld said officers from around the country, including Baltimore, New York, New Jersey, Chicago, San Francisco and New Orleans, would be in D.C. to assist with transit security.

What will security be like in the rest of the city?

While vehicles won’t face searches and there largely won’t be road closures in most of D.C. outside of the central area, officials said that doesn’t mean they will be left without resources in case something should occur.

“We do recognize that because we have such a robust and hardened perimeter, that there’s a potential for people to go elsewhere, whether that’s back to their state capitol or other parts of the city,” Miller said. “We’ve had conversations that we can’t create a fortress and allow other parts of the city to suffer for services, whether it’s fire or EMS. The city should not be concerned that they will be let down by MPD.”

Acting DC Police Chief Robert Contee said his agency will have resources pre-stationed at different areas around the city to respond as needed.

When will things go back to normal?

D.C. Mayor Muriel Bowser warned residents Friday that the city would likely be looking at a “new normal” following Inauguration Day, which could mean increased security for the near term.

“We saw white extremists storm the Capitol Building who were trained and organized, and seemingly with the intent to capture the vice president of the United States and possibly harm members of Congress,” Bowser said. “So while we are focused on January 20, we’re also focused on January 21 and every day thereafter in the nation’s capitol.”

Bowser said she does not expect to have visiting National Guard throughout the city for weeks to come, but that security will remain heightened in other ways.

While saying, “I generally don’t like fences,” Bowser also wouldn’t give a firm timeframe on when the newly erected 12-foot-tall security fence around the Capitol Building will come down.

“That fence is a temporary fence. It’s not a permanent fence. You’ve seen how quickly it can go up. It can just as quickly come down,” Bowser said. “But we want to make sure we replace that sense of security with something else.”

How much is this all going to cost?

According to Chris Rodriguez, director of the District of Columbia Department of Homeland Security, the agency initially asked for $34.9 million for its Inauguration Fund. That was before the Black Lives Matter protests this summer.

“After the First Amendment demonstrations over the summer, we changed that number to $45 million,” Rodriguez said. “The additional $10 million was not approved, and it still has not been approved at this time.”

Rodriguez said the president’s approval Monday of a federal disaster declaration in the District has allowed FEMA to mobilize additional assistance into the city to supplement Inauguration Day preparations.