The visit emphasizes pageantry over policy as Trump attends a “Namaste Trump” rally. 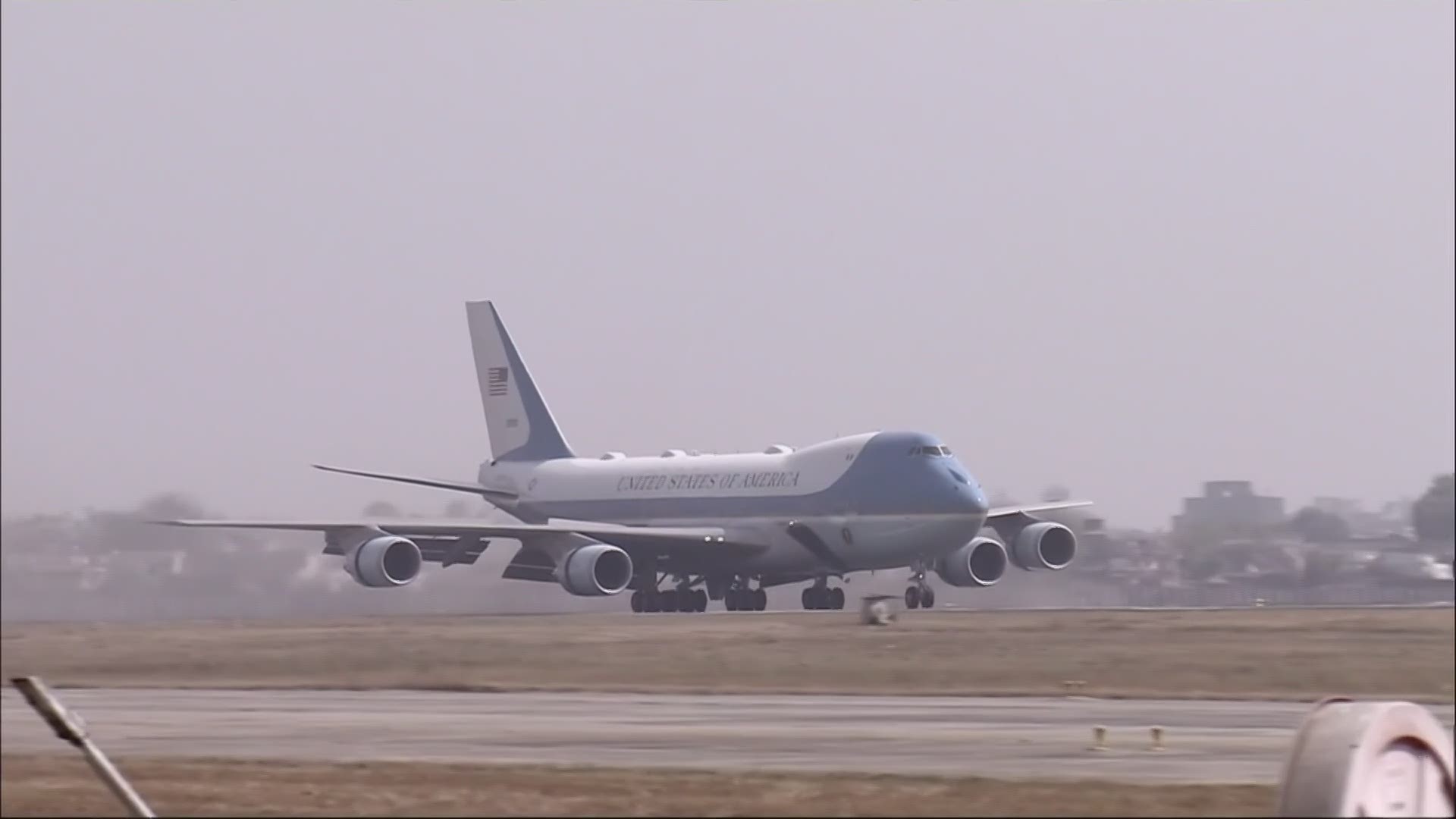 As Trump walked from the iconic 17th century mausoleum, he remarked that it was an “incredible place." On his flight to Agra, India, Trump told reporters on Air Force One that he'd never been to the UNESCO world heritage site before. He and first lady Melania Trump toured the white marble structure just as the sun was beginning to set.

India poured on the pageantry with a joyful, colorful welcome for President Donald Trump on Monday that kicks off a whirlwind 36-hour visit meant to reaffirm U.S.-India ties while providing enviable overseas imagery for a president in a re-election year.

Dancers in traditional attire, dancers and drummers lined the red carpet rolled out at the stairs of the presidential aircraft as Trump basked in the raucous reception that has eluded him on many foreign trips, some of which have featured massive protests and icy handshakes from world leaders. In India, he instead received a warm embrace — literally — from the ideologically aligned and hug-loving Prime Minister Narendra Modi.

Modi turned out throngs at the 100,000-plus capacity stadium, who sang along with speakers blaring the song “Macho Man.” Thousands more were along his motorcade route, shy of the up to 10 million that Trump speculated would be on hand.

At the rally, Trump announced more military sales to India, including helicopters. He said he was working with Modi on a trade deal as the audience cheered.

The sun-baked city of Ahmedabad bustled as Trump arrived, as the streets teemed with people eager to catch a glimpse of the American president. Newly cleaned roads and planted flowers dotted the roads amid hundreds of billboards featuring the president and first lady Melania Trump.

His first stop was Gandhi's home, where Trump donned a prayer shawl and took off his shoes to create the incongruous image of a grandiose president quietly walking through the humble ashram. He inspected the loom used by the famed pacifist and looked at statues of monkeys representing Gandhi's mantra of "See no evil, Hear no evil, Speak no evil" before departing for a far more boisterous setting: the mega-rally at the world's largest cricket stadium.

Trump’s motorcade traveled amid cheers from a battery of carefully picked and vetted Modi loyalists and workers from his Bharatiya Janata Party who will stand for hours alongside the neatly manicured 22-kilometer (14-mile) stretch of road to accord the president a grand welcome on his way to the newly constructed stadium. Tens of thousands of police officers were on hand to keep security tight and a new wall has come up in front of a slum, apparently to hide it from presidential passers-by.

On the way to the stadium, Trump's motorcade crossed over a river where a barge was emblazoned with “TRUMP" and onlookers chanted “Modi!”

The stadium was packed with revelers, many of whom sported Trump and Modi masks, as they sat in 80-degree temperatures and listened to both traditional and pop Indian music ahead of the leaders' arrival.The “Namaste Trump” rally will be, in a way, the back half of home-and-home events for Modi and Trump who attended a “Howdy Modi” rally in Houston last year that drew 50,000 people.

Trump’s foreign visits have typically been light on sightseeing, but this time, the president and first lady Melania Trump are to visit the Taj Mahal. Stories in local media warn of the monkeys that inhabit the landmark pestering tourists for food and, on occasion, menacing both visitors and slingshot-carrying security guards.

Images of American presidents being feted on the world stage stand in contrast to those of their rivals in the opposing party slogging through diners in early-voting states and clashing in debate. This trip, in particular, reflects a Trump campaign strategy to showcase him in his presidential role during short, carefully managed trips that provide counter-programming to the Democrats’ primary contest and produce the kinds of visuals his campaign can use in future ads. His aides also believe the visit could help the president woo tens of thousands of Indian-American voters before the November election.

The visit also comes at a crucial moment for Modi, a fellow populist, who has provided over a steep economic downturn and unfulfilled campaign promises about job creation. When Trump touches down in Delhi later on Monday, he will find a bustling, noisy, colorful capital that also is dotted with half-finished construction projects stalled due to disappearing funding.

The president on Tuesday will conclude his whirlwind visit to India with a day in the capital, complete with a gala dinner meetings with Modi over stalled trade talks between the two nations. The two nations are closely allied, in part to act as a bulwark against the rising influence of nearby China, but trade tensions between the two countries have escalated since the Trump administration imposed tariffs on steel and aluminium from India. India responded with higher penalties on agricultural goods and restrictions on U.S. medical devices. The U.S. retaliated by removing India from a decades-old preferential trade program.

Eyes will also be on whether Trump weighs on in the protests enveloping India over its Citizenship Amendment Act. It provides a fast track to naturalization for some migrants who entered the country illegally while fleeing religious persecution, but excludes Muslims, raising fears that the country is moving toward a religious citizenship test. Passage has prompted large-scale protests and a violent crackdown.

Typically, Trump has not publicly rebuked world leaders for human rights abuses during his overseas trips. But one senior administration official said the U.S. is concerned about the situation and that Trump will tell Modi the world is looking to India to continue to uphold its democratic traditions and respect religious minorities.