President Trump has repeatedly pointed to El Paso to make his case that a border wall is necessary. 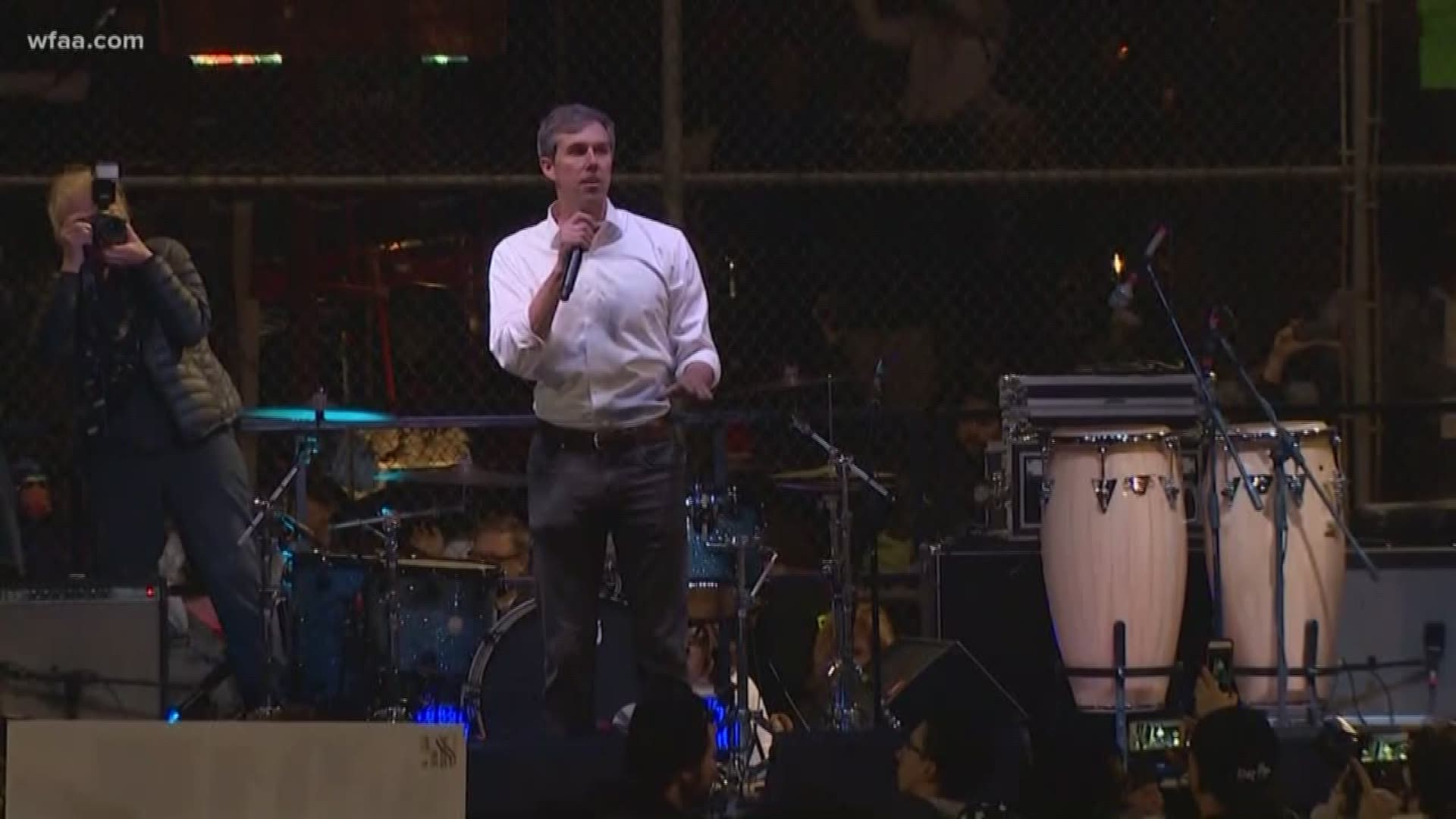 WASHINGTON — President Donald Trump charged ahead with his pledge to build a wall at the U.S.-Mexico border, skimming over the details of lawmakers' tentative deal that would give him far less than he's been demanding and declaring he's "setting the stage" to deliver on his signature campaign promise.

In the first dueling rallies of the 2020 campaign season, Trump's "Finish the Wall" rally in El Paso went head-to-head Monday night against counterprogramming by Beto O'Rourke, a former Democratic congressman and potential Trump rival in 2020, who argued that walls cause more problems than they solve.

The rallies across the street from each other served as a preview of the heated yearslong fight over the direction of the country. And they made clear that Trump's long-promised border wall is sure to play an outsized role in the presidential race, as both sides use it to try to rally their supporters and highlight their contrasting approaches.

Standing in a packed stadium under a giant American flag and banners saying "FINISH THE WALL," Trump insisted that large portions of the project are already under construction and vowed to fulfill his 2016 campaign promise regardless of what happens in Congress.

O'Rourke, meanwhile, held a countermarch with dozens of local civic, human rights and Hispanic groups in his hometown, followed by a protest rally attended by thousands on a baseball field within shouting distance from the arena where Trump spoke.

"With the eyes of the country upon us, all of us together are going to make our stand here in one of the safest cities in America," O'Rourke said. "Safe not because of walls but in spite of walls."

More than a half-hour in his rally, Trump had scarcely mentioned immigration, offering just a passing suggestion that those chanting "Build the Wall" switch to "Finish the Wall." Instead, he mocked O'Rourke, insisting the Texan has "very little going for himself except he's got a great first name" and deriding his crowd size, even though both men drew thousands.

"That may be the end of his presidential bid," Trump quipped, adding: "You're supposed to win in order to run."

The rallies began moments after negotiators on Capitol Hill announced that lawmakers had reached an agreement in principle to fund the government ahead of a midnight Friday deadline to avoid another shutdown.

Republicans tentatively agreed to far less money for Trump's border wall than the White House's $5.7 billion wish list, settling for a figure of nearly $1.4 billion, according to congressional aides. The funding measure is through the fiscal year, which ends Sept. 30.

Three people familiar with Congress' tentative border security deal have told The Associated Press that the accord would provide $1.375 billion to build 55 miles (90 kilometers) of new border barriers — well below the $5.7 billion that Trump demanded to build over 200 miles (320 kilometers) of wall along the Mexican boundary. The money will be for vertical steel slats called bollards, not a solid wall.

The talks had cratered over the weekend because of Democratic demands to limit immigrant detentions by federal authorities, but lawmakers apparently broke through that impasse Monday evening. Now they will need the support of Trump, who must sign the legislation.

But Trump appeared oblivious to the deal, saying that he'd been informed by aides that negotiators had made some progress but that he had declined to be fully briefed because he wanted to go on stage.

"I had a choice. I could've stayed out there and listened, or I could have come out to the people of El Paso, and Texas, I chose you," Trump said. "So we probably have some good news. But who knows?"

Trump, who has been threatening to declare a national emergency to bypass Congress, added, "Just so you know, we're building the wall anyway."

The countermarch began at a high school about a mile from the baseball field in the shadow of Trump's rally, its participants streaming past part of the border and the towering metal slats lining it. Marchers waved handmade signs reading "Fire the Liar," ''Hate Is Not What Makes America Great" and "Make Tacos, Not Walls." They changed "No wall!" and "Beto! Beto! Beto!"

Many marchers, and those in the crowd at the ballpark, carried flags reading "Beto for President 2020" or black-and-white "Beto for Senate" yard signs from his closer-than-expected November race against Republican Sen. Ted Cruz that had been modified slightly to read "Beto for President." The Democrat said the event wasn't only about him — or Trump — but meant to tell the true story of life in El Paso.

"It is going to be the people of the border," O'Rourke told the crowd before beginning the march, "who will write the next chapter in the history of this great country. Ensuring that our laws and our language and our leaders match our values."

Trump has insisted that large portions of the border wall are already underway. But the work focuses almost entirely on replacing existing barriers. Work on the first extension — 14 miles (23 kilometers) in Texas' Rio Grande Valley — starts this month. The other 83 miles (134 kilometers) that his administration has awarded contracts for are replacement projects.

Trump has repeatedly pointed to El Paso to make his case that a border wall is necessary, claiming that barriers turned the city from one of the nation's most dangerous to one of its safest.

"You know where it made a difference is right here in El Paso," he said Monday, adding: "They're full of crap when they claim it hasn't made a big difference."

But that's not true.

El Paso had a murder rate of less than half the national average in 2005, a year before the most recent expansion of its border fence. That's despite being just across the border from Ciudad Juarez, Mexico, a city plagued by drug violence. The FBI's Uniform Crime Report shows that El Paso's annual number of reported violent crimes dropped from nearly 5,000 in 1995 to around 2,700 in 2016. But that corresponded with similar declines in violent crime nationwide and included periods when the city's crime rates increased year over year, despite new fencing and walls.

The Trump campaign released a video showing El Paso residents saying the wall helped reduce crime. But many in the city have bristled at the prospect of becoming a border wall poster child.

Trump advisers have long insisted that, fulfilled or not, the wall is a winning issue for the president, who has already sought to rewrite the "Build the Wall" chants that were a staple of his 2016 campaign to "Finish the Wall."

An AP-NORC poll conducted during last month's shutdown found that more Americans oppose a wall than support it. But nearly 8 in 10 Republicans are in favor, with only about 1 in 10 opposed.

Democrats, meanwhile, are adamant that Trump's insistence on a wall helps them and point to their 2018 midterm election gains in the House as proof that voters want to block Trump's agenda.