An economist who won the Nobel prize on Monday found out in a rather strange way...by his neighbor (and colleague) knocking on his door in the middle of the night. 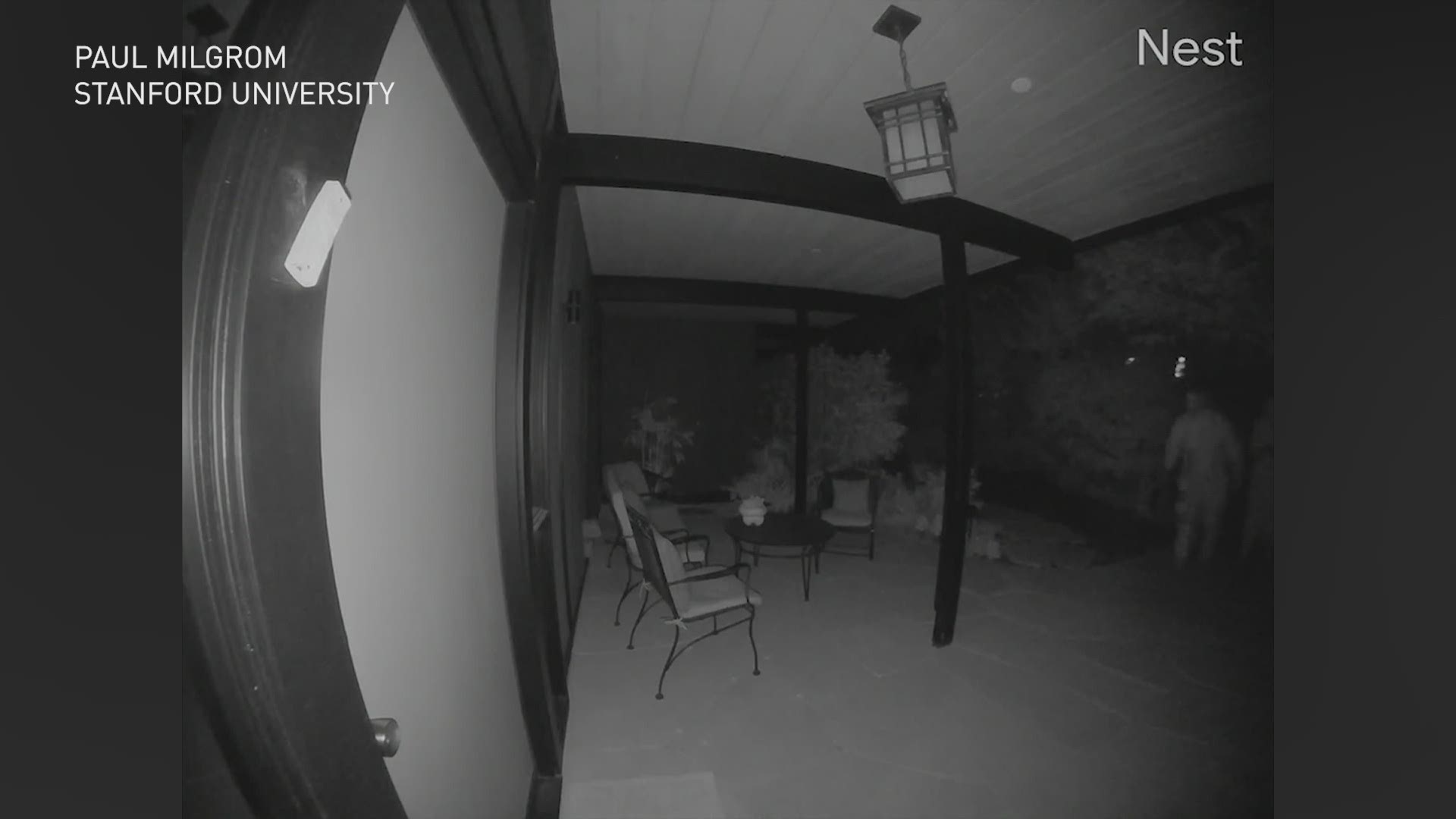 STOCKHOLM, Sweden — Auctions are everywhere in today’s economy. They determine how Google sells ads, what price consumers end up paying for electricity, and the way governments sell off the public airwaves to telecom companies and broadcasters.

The discoveries of Paul R. Milgrom and Robert B. Wilson, both of Stanford University, “have benefited sellers, buyers and taxpayers around the world,” the Nobel Committee said.

Wilson, 83, was once Milgrom's Ph.D. adviser, and the two also happen to be neighbors. Reached by phone at his home in California, Milgrom, 72, said he received news of their win “in a strange way.”

“I got a knock at my door from Bob Wilson,” he told The Associated Press.

Security camera footage at Milgrom’s home captured the moment. Wilson knocked on Milgrom’s door in the dead of night and spoke into the intercom. “Paul,’’ he said. “It’s Bob Wilson. You’ve won the Nobel Prize.’’ Awakened, Milgrom stammered for a moment and then said: “Wow.’’

The two men tackled the tricky problem of making auctions work efficiently. The committee said Wilson’s work showed “why rational bidders tend to place bids below their own best estimate of the common value” — which could mean the item goes for less than it’s worth and perhaps not to the buyer who most wants it, neither of which is supposed to happen if the auction is working properly.

“Auctions ask and answer the most fundamental questions in economics: Who should get the goods and at what prices?’’ said economist Peter Cramton, a former student of Wilson’s now at the University of Maryland and the University of Cologne in Germany. The winners’ work provides guidance about “how to price and allocate scarce goods -- radio spectrum, electricity, financial securities, and many more.’’

The effects of their work can be seen all around.

“Online advertising is sold at auction," said David Warsh, who tracks economic research at his blog Economic Principals. “That Google was able to adopt the method so quickly and seamlessly depended entirely on theory developed by Milgrom and his competitors and their students.''

The work is about more than money. Some governments, for example, auction off the right to pollute in hopes of reducing emissions; cleaner companies can resell unneeded rights to dirtier ones, creating a financial incentive for companies to make their operations greener. “The objective is not always to maximize the revenue for the seller but also can have a societal objective," said Nobel Committee member Ingrid Werner.

One problem in auctions is the so-called winner's curse. If buyers are vying to purchase, say, fishing rights, they have to make bids without knowing what the price of fish will be in the future. They run the risk of winning the auction only by overpaying. To compensate, they tend to shave their bids.

RELATED: Here's who qualifies for the Nobel Peace Prize and how it's awarded

A solution, according to the research by Wilson and Milgrom, is for the seller to provide as much information as possible before the bidding begins, perhaps providing an independent appraisal of the item being sold. Solving the problem doesn’t just help the seller get a better price; it helps make sure the item being auctioned goes to the bidder likely to make the most efficient use of it — a key goal of economic policy.

Their research has had a big impact on the telecommunications industry, where private companies seek government licenses to use publicly owned radio frequencies for everything from mobile phone calls to internet payments.

Before the 1990s, the U.S. government essentially conducted “beauty contests’’ to hand out the frequencies, letting companies make their case for getting the licenses. The approach encouraged aggressive lobbying but didn’t raise much money for the Treasury.

In 1994, the U.S. government turned to auctions. Milgrom and Wilson (with help from Preston McAfee, now at Google) designed an auction format in which all the licenses were sold in one go. That format discourages speculators from buying up frequencies in a specific geographic area and then reselling them to big telecommunications companies seeking to patch together national or regional networks.

Credit: Paul Milgrom, Stanford University
An economist who won the Nobel prize on Monday found out in a rather strange way...by his neighbor and colleague knocking at his door.

The auction raised $617 million — selling frequencies that previously were handed out for virtually nothing — and became a model for countries from Canada to India. The format has also been used to auction off electricity and natural gas.

Speaking to reporters in Stockholm by phone after learning of his win, Wilson struggled to think of a recent auction he himself had participated in. But then added: “My wife points out to me that we bought ski boots on eBay.”

Americans have figured prominently among this year’s Nobel winners. Leaving aside the peace prize, which went to the U.N.’s World Food Program, seven of the 11 laureates have been Americans.

Goran Hansson, secretary-general of the Royal Swedish Academy of Sciences who announced the award, said that reflected American investment in research after World War II. “And we’ll see how that trend may change," he added.

Wilson said that, given the coronavirus pandemic, he had no immediate plans for what to do with his share of the the 10 million krona ($1.1 million) cash prize that comes with the award, along with a gold medal.

“Probably I’ll just save it for my wife, my children,” he said.

Unlike the other Nobel prizes, the economics award wasn’t established in the will of Alfred Nobel but by the Swedish central bank in his memory in 1968, with the first winner selected a year later. It is the last prize announced each year.

Last week, the Nobel Committee awarded the prize for physiology and medicine for discovering the liver-ravaging hepatitis C virus. The prize for physics honored breakthroughs in understanding black holes, and the chemistry prize went to scientists behind a powerful gene-editing tool.

The literature prize was awarded to American poet Louise Glück. The World Food Program won the peace prize for efforts to combat hunger.

RELATED: Nobel Prize for chemistry awarded to Charpentier and Doudna