A bleak outlook for millions facing cutoff of US jobless aid

If no agreement is reached in negotiations taking place on Capitol Hill, more than 9 million people will lose federal jobless aid. 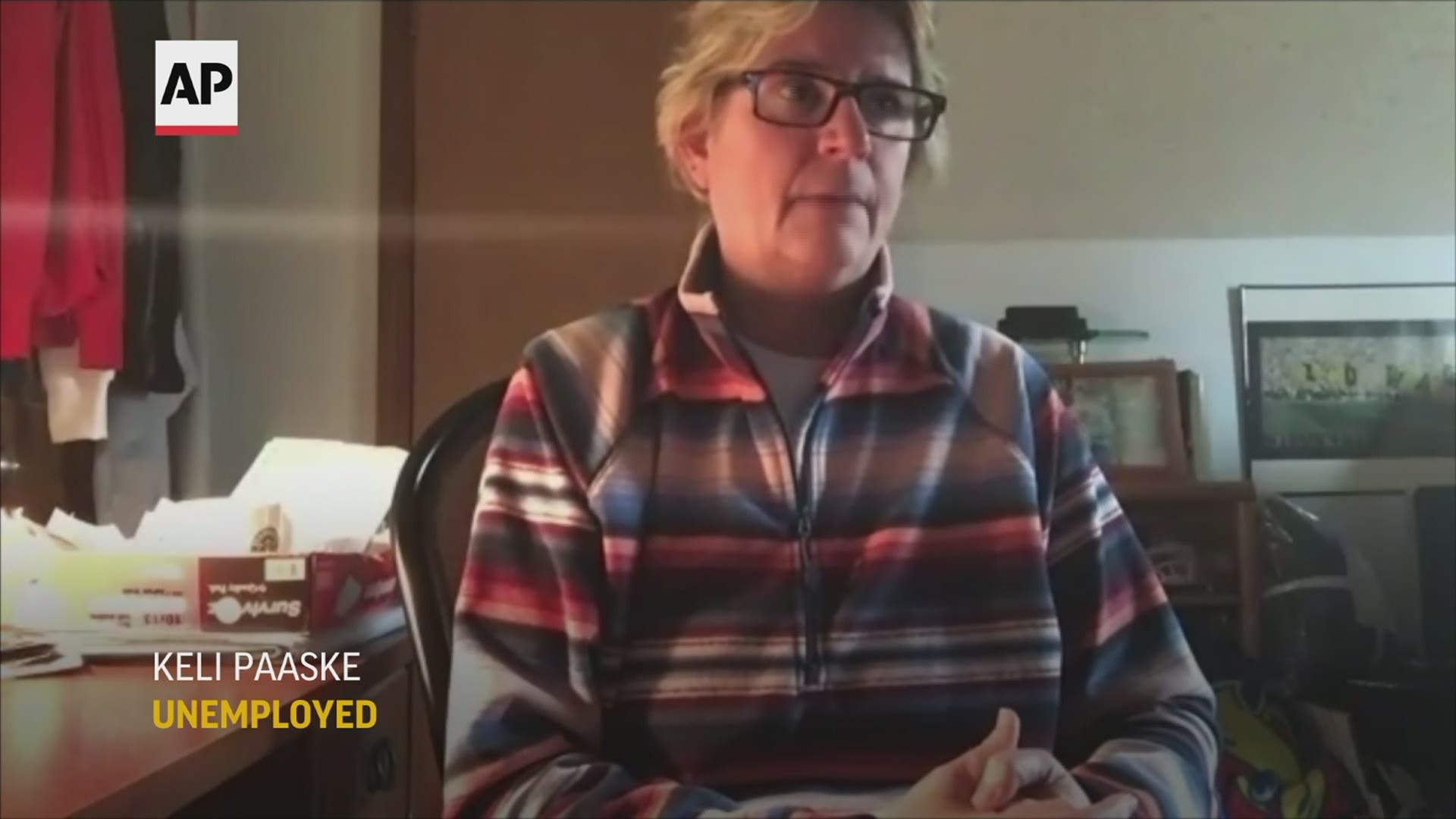 INDIANAPOLIS — Tina Morton recently faced a choice: Pay bills — or buy a birthday gift for a child? Derrisa Green is falling further behind on rent. Sylvia Soliz has had her electricity cut off.

Unemployment has forced aching decisions on millions of Americans and their families in the face of a rampaging viral pandemic that has closed shops and restaurants, paralyzed travel and left millions jobless for months. Now, their predicaments stand to grow bleaker yet if Congress fails to extend two unemployment programs that are set to expire the day after Christmas.

If no agreement is reached in negotiations taking place on Capitol Hill, more than 9 million people will lose federal jobless aid that averages about $320 a week and that typically serves as their only source of income.

Green, 39, and her husband are among them. An end to their unemployment benefits would force them to keep missing rent payments on their home in Dyer, Indiana, near Chicago. The couple have eight children. Green's husband is a self-employed truck driver whose business disappeared when the pandemic erupted in the spring. Only in October did he start to pick up occasional work.

He now receives about $235 a week in unemployment aid. Even so, “all of our bills are late,” Green said. They’ve received several shutoff notices from utilities before managing to pay just before service was to be cut off.

“That’s really scary," Green said, "because what are we going to do when we lose the unemployment money?”

The end of jobless aid is approaching at an especially perilous time. Job growth slowed sharply in November, and the resurgence of viral cases appears to be out of control across the country.

Even with the prospect of an effective vaccine being widely distributed in coming months, economists say the picture will worsen before it improves. Many foresee a net loss of jobs in December for the first time since April.

On Friday, President-elect Joe Biden called on Congress to quickly approve a bipartisan $908 billion package that would establish a $300-a-week jobless benefit as well as send aid to states and localities, help schools and universities, revive subsidies for businesses and support transit systems and airlines. Details are still being worked out, but the outlines of a final bill could emerge soon.

More than 20 million people are now receiving unemployment benefits. More than half are beneficiaries of two programs that were part of rescue aid legislation Congress enacted in March. One program made self-employed and contract workers eligible for jobless aid for the first time and provided 39 weeks of support. The other program supplied 13 weeks of extended benefits to the 26 weeks that most states provide.

About 9.1 million who are receiving aid from those programs will be cut off Dec. 26, according to a report from the Century Foundation. An additional 4.4 million are expected to exhaust all 39 weeks by year's end. If Congress agrees to provide more weeks of aid and to revive both programs, those beneficiaries could keep receiving aid next year.

That would be a life-saver for Sylvia Soliz who lives in Corpus Christi, Texas. Soliz, 36, who still owes part of her rent for November and December, has received an eviction notice. She's also just had her electricity cut off.

Back in March, Soliz was laid off from her job as a nurse's assistant at a senior living facility. She's now receiving $414 in jobless aid every two weeks. With four children, it doesn't go very far.

“The day I get it, it’s already gone because my kids need so many things,” Soliz said. “Of course, I have to pay a portion to whatever bill I have, so that way I can stretch it out. But every time another check comes in, it’s another bill.”

Soliz is applying for a new job, and she checks in with her old employer. So far, no luck. She also worries about contracting COVID-19. Soliz is hopeful that Congress will agree to provide more aid, but she feels “they are basically gambling with us."

A cutoff of jobless benefits now, with so many millions of Americans still receiving the aid, would be unusually early compared with previous recessions. In the aftermath of the Great Recession of 2008-2009, the government extended unemployment benefits to 99 weeks, and the additional aid lasted through 2013. When that program ended, about 1.3 million people lost benefits — a small fraction of the number who would lose jobless aid this time.

“I am very afraid of people facing homelessness — that’s our top concern," said Andrew Stettner, a senior fellow at the Century Foundation. “It’s a terrible unforced policy error to make. It will slow the recovery that we’re having by cutting off these benefits so early.”

About one in six renters in the United States are behind on their rent, according to a survey from the Census Bureau. And 12% of adults say their families didn't have enough to eat at some point in the past week, the survey found. That's up from just 3.7% in 2019, according to the left-leaning Center on Budget and Policy Priorities.

A wrenching set of choices has confronted Keli Paaske, who lives in the Kansas City area. Since being furloughed in the spring from her sales job at a company that makes fire doors, Paaske, 56, has cut back her grocery budget. She thought she'd be called back once the virus waned. But when her boss phoned in August, it was with a different message: Her job had been eliminated.

Paaske had hesitated to spend $360 needed to euthanize her 15-year old dog, who had a brain tumor, before going through with it. Without unemployment aid, Paaske isn't sure how she would manage. She may seek financial help from her parents, who are in their 80s, something she has resisted doing. If she doesn't find a job by March, she said, she'll stop leasing her car.

Tina Morton used to clean houses near where she lives in Winchester, Kentucky. But there’s been little work since the pandemic struck. Like many other single mothers, she has struggled with the need to find another job while simultaneously caring for children — a son and two nephews she has custody of — who are attending school online at home.

“Single parents cannot go out here and ... just find any job," said Morton, 39. “We’ve got our kids here that are stuck at home.”

Last week, Morton had to choose between paying a phone bill and buying one of her nephews a birthday present. (She got him a present). If her jobless aid ends, she expects to face painful decisions.

“That’s what hurts me the most,” she said. “My job is to give them more — give them better than where they came from.”

Credit: AP
Keli Paaske searches for jobs online from the dining room of her home in Olathe, Kan. Friday, Dec. 4, 2020.