What you should know about the presidential candidates’ health

Presidential candidates have long been wary of allowing the public to see them as less than a picture of perfect health. 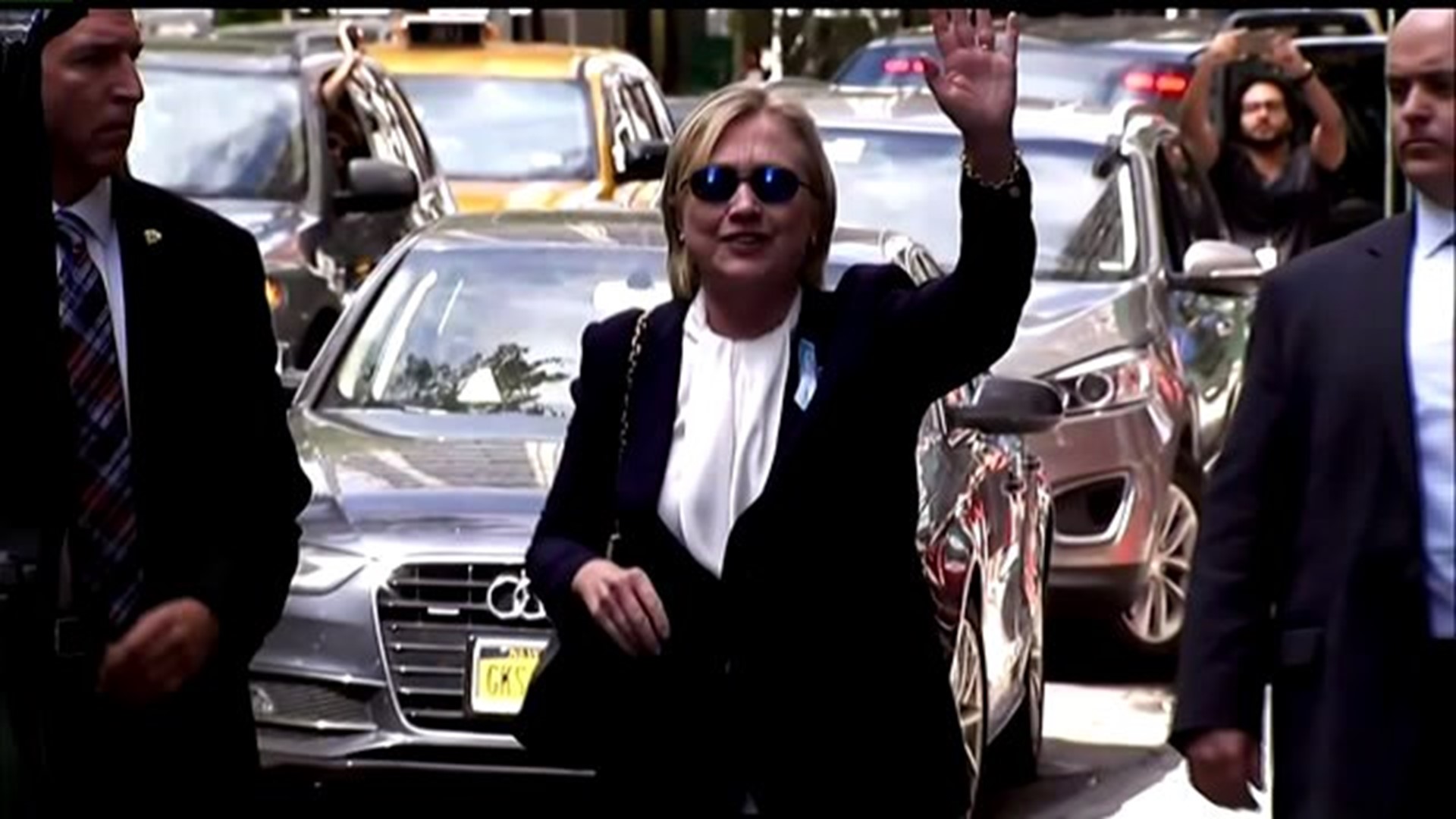 (CNN) -- Presidential candidates have long been wary of allowing the public to see them as less than a picture of perfect health.

Over the weekend, Hillary Clinton's health became a pressing question as she appeared wobbly and stumbled as Secret Service agents helped her into a van to exit a September 11 memorial service on Sunday. Her doctor revealed that Clinton was diagnosed with pneumonia on Friday.

The events over the weekend turned the state of her health from conservative conspiracy theory into a genuine campaign issue. Trump and his top surrogates have claimed that Clinton faces a health crisis, citing selectively edited videos of public events to advance claims she's suffered seizures.

There is no credible evidence to support any of these claims. Clinton's physician -- the only person to speak on the record who has actually examined her -- has repeatedly affirmed the former secretary of state's health and fitness for the highest office in the land.

Not much on Trump health either

In December 2015, the campaign released a letter from Dr. Harold Bornstein, Trump's personal physician for the last three decades. It said Trump had lost 15 pounds in the last year, took aspirin daily and as well as a low dose of statin and had "astonishingly excellent" lab test results and blood pressure.

"If elected," the doctor wrote, "Mr. Trump, I can state unequivocally, will be the healthiest individual ever elected to the presidency."

The letter was widely lampooned as being bizarrely worded, and containing medically incorrect terms and an unprofessional conclusion. Most notably some doctors found the letter heavy on bombast and lacking in objective data.

Bornstein told CNN earlier this month that he was rushed for time when writing the letter since he had patients to see. He also said he stands by the letter he wrote for Trump.

How much do voters need to know?

Presidential candidates have taken to assuring the American people they are healthy and fit to lead.

As Election Day nears, what right does the public have to know the intimate details of a candidate's medical history? After all, they are shielded by the same federal privacy laws that protect each of us from undue scrutiny.

"It's a controversial issue because some illness can be blown out of proportion and with modern medicine, a person can do well," said Jerrold Post, author of "When Illness Strikes the Leader." "But if a person is suffering from early Alzheimer's or another serious disease, it's quite another story."

History shows that most presidential candidates have kept their medical information private. Only recently have candidates opted to release letters from personal physicians. Few go as far as Sen. John McCain, who released thousands of carefully selected medical records to the press for a few hours during his bid for the 2000 and 2008 nominations.

"The public has a right to know if the candidate has a reason to believe he might die in office. Short of that, I think the president has a right to keep his medical and mental health information private," said George Annas, chairman of the department of health law, bioethics and human rights at Boston University School of Public Health.

"Why do some open up? I think the ones who talk believe they are better off with the information out there. They must think the speculation is worse than the reality."

History reveals an astounding list of hidden truths when it comes to the health of the commander in chief. One of the most unusual was Grover Cleveland's 1893 coverup of his oral cancer surgery. He smuggled a surgeon and his team onto a friend's yacht to remove a tumor from the roof of his mouth. Cleveland emerged from his "fishing trip" a week later. No one knew what had happened for nearly a quarter-century.

Woodrow Wilson had suffered several strokes while he was serving as president of Princeton, years before he ran for president, Post said, but never revealed his medical history to voters.

In 1919, while campaigning for the Treaty of Versailles, "he suffered a massive stroke, but they concealed it and just said he was under the weather and no one was informed," Post said. "So we've already had the first woman president, his wife Edith. In fact, she was to have said 'I don't know why you men make such a fuss, I had no trouble running the country while Woody was sick.' "

Decades later, "the most important event was the death of Franklin Roosevelt, back in 1945," said Boston University's Annas. While the public knew Franklin Delano Roosevelt was wheelchair-bound due to polio when he ran for the fourth time, they did not know he had advanced heart disease and hypertension, believed to have contributed to the cerebral hemorrhage that killed him months into his final term.

"The idea of a president dying in office from a disease he knew he had before he ran for election or re-election doesn't sit quite right with most people," said Annas.

The ability to lead

"We want a leader who is all wise and all powerful and in excellent health," Post said. "If we thought the candidate was ill or failing it would affect his electability."

John F. Kennedy, at 43 the youngest man to become president, was viewed as healthy and vibrant during his campaign. In reality, he took office suffering from hypothyroidism, back pain and Addison's disease and was on a daily dose of steroids and a host of other drugs.

"Addison's disease affects your cortisol levels, your ability to handle stress," said Dr. Connie Mariano, who served as White House physician for George W. Bush and Bill Clinton. "You wonder, was the Bay of Pigs an issue because he wasn't adequately treated for Addison's?"

Ronald Reagan was diagnosed with Alzheimer's after his presidency. Whether it affected his ability to function while in office is a subject of debate. Today, however, medical science knows Alzheimer's begins in the brain 20 to 30 years before symptoms begin.

"Can you rely on the politician's physician to spot these types of issues? Some illnesses are only known by the symptoms the patient complains of," Post said. "The softening of mental processes that begin in early Alzheimer's, for example, may only show up if the politician complains about it."

Mariano adds that even when there are signs: "You have to remember if there is something wrong with a president that kicks him out of office, everyone who comes with him leaves. So everyone wants to keep him in, they want to silence the doctor."

And then there's the specter of mental illness. "People have horrible prejudice against mental illness," said Annas, of Boston University

"If you have a mental illness, you're depressed, you can't get out of bed that's going to affect your ability to do your job," Mariano said.

A 2006 study by Duke psychiatrists applied today's diagnostic criteria to historical records of the first 37 presidents and found 18 of them met the criteria for psychiatric disorders, mostly major depression or anxiety. The study also found Teddy Roosevelt and Lyndon Johnson would have both been diagnosed with bipolar disorder.

In fact, say the researchers, 10 of the 18 presidents exhibited enough symptoms of mental illness while in office to have affected their ability to lead the nation.

In 2008, a high-profile panel of doctors recommended that presidential and vice-presidential candidates be required to undergo a health exam by an independent team of doctors from the American College of Physicians. Mariano was on that committee.

"So we said in a perfect world, wouldn't it be great if we had a committee that performed physicals and said this person is good to go, just like we do for airline pilots, or in the military," said Mariano. "It would say: 'OK, I'm good for four to eight years, I hopefully won't die of some disease that I'm aware of, I'm mentally sane and I don't have any drug or alcohol or psychiatric issues and I want to run for office.' "

The recommendation didn't go anywhere. Mariano now thinks it's not practical in a polarized political world.

"Part of that is that you have to have compliance by the person who is running for office," Mariano said. "A lot of them feel like that's an invasion of their privacy, they're not willing to share that. And part of it was they'll say 'Wait a minute, do the doctors reveal if they're Democrat or Republican? You know a Republican doctor can say that Democratic candidate is crazy.' "

Mariano feels that the only good solution is a free and inquisitive press.

"The things that happened with Woodrow Wilson and his stroke, and FDR, and Kennedy -- can you do that now? It's harder to hide things today because you have 24/7 news."